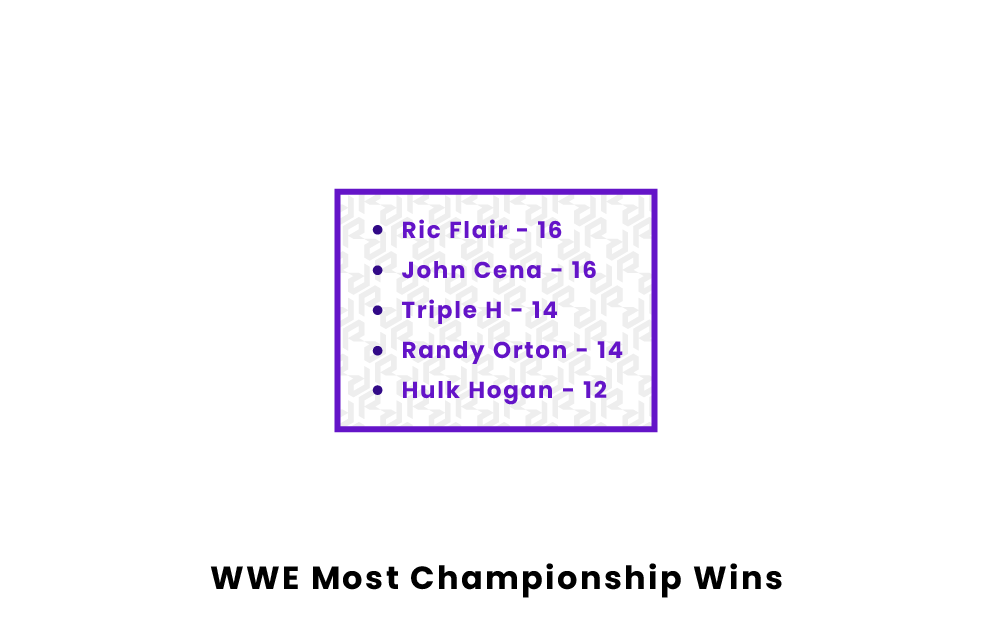 The WWE is one of the most entertaining sports leagues in the world, with athletes combining seemingly vicious acts of violence with a level of theatrics and showmanship not seen in other professional leagues. There have been countless characters who have left their mark on the sport, but a select few were dominant enough to rack up a record number of titles. To learn more about the WWE wrestlers with the most championships, keep reading below.

Tied for the most wrestling championships of all time at 16, Ric Flair was arguably the sport’s biggest star of the 20th century. He started professionally competing in 1972, and in 1977 he won his first-ever championship, becoming the National Wrestling Alliance (NWS) United States Heavyweight Champion. Over the next three years, Flair won five separate national titles as the heavyweight champ, but his real ascension to stardom came in the 1980s. In 1981, Flair won his first-ever NWA World Heavyweight Championship, and he would go on to win that title seven more times during his career. In 1991, the WCW (World Championship Wrestling) seceded from the NWA, and Flair became the new league’s first heavyweight champ. He would also dominate this title, defending it five more times. Flair also won two WWF (now WWE) national championships during his time in the ring, putting together one of the most legendary resumes in the history of the sport.

Tied with Flair at 16 titles, John Cena was the poster boy for wrestling in the early 2000s. He burst onto the scene as one of wrestling’s biggest personalities, and he had the skills to back it up. Cena won 13 WWE championships, the most of any wrestler, but his resume extends even further. The “Invisible Man” was also a three-time World Heavyweight Champion in wrestling, using his elite strength and athleticism to overwhelm opponents in the ring. He is still actively competing today.

Triple H has the third most titles of all professional wrestlers, with 14. Before Cena became one of wrestling’s biggest names, Triple H was known across the country as one of the greatest in the sport. He bounced around multiple smaller leagues with a number of different stage names before signing with the WWF in 1995 and adopting the persona that fans today know and love. In the following quarter-century, Triple H would go on to become one of the sport’s true superstars. He was a nine-time WWF/WWE champion (the second-most titles of all time) and also won five World Heavyweight titles. The wrestler also appeared in a number of movies and television shows during the height of his career, further popularizing his persona.

With 14 professional wrestling titles, Randy Orton is tied for the third-most of all time. Entering the national spotlight around the same time as Cena, Randy Orton was a wrestler steeped in legacy. His grandfather Bob Orton Sr. was a wrestler, as was his father, “Cowboy” Bob Orton. Orton’s uncle Barry O also competed in professional wrestling, giving the St. Louis-born competitor plenty of experience to draw from. He won ten WWE championships, second to only Cena, and was also a four-time World Heavyweight Champion. Orton developed the persona of “Legend Killer” during his early days, taking down a number of well-established stars in the league on his way to the top.

Hulk Hogan’s 12 championships are the fifth-most in the history of wrestling. One of America’s favorite wrestlers of the eighties and nineties, Hulk Hogan was larger than life, literally. Standing at 6’8'' and weighing over three hundred pounds, Hogan had an outsized personality to match his massive frame. He was all about being a champion, and his ability to stay on top of the sport was legendary. He was the second-longest reigning WWF champion of all time, combining six titles over a record-breaking 1,474 days from 1984-1988. He had a similarly-dominant run in WCW, stringing together six championships from 1994-1995 to become the longest-reigning WCW World Heavyweight Champion of all time.

Which wrestler has the most championships of all time?