What Are The Rules Of Wrestling? 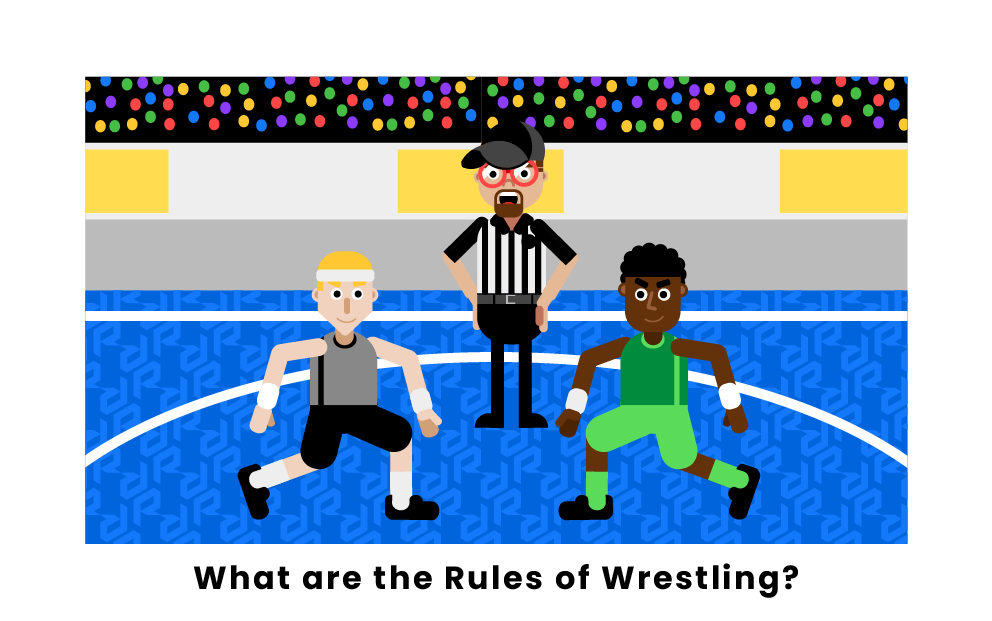 The main objective of wrestling is for the player to pin their opponent onto their back. A pin is classified as pinning your opponent onto their back with any part of the shoulders onto the mat for two seconds. If no one is pinned during a match then the wrestler with the most points at the end of the match wins. Wrestlers must always wear the appropriate gear during a match which includes a regulation singlet and headgear. In the event of a tied match, wrestlers will have to compete against each other again for a 30 second quick match period where the wrestler who scores the first point shall be declared the winner.

Wrestling is a sport with many rules involved, specifically surrounding rules for penalties and how to score different points. There are four main moves a wrestler should utilize during a match: takedown, escape, reversal, and near fall. Wrestlers should also try and avoid committing penalties because it risks them losing points, being disqualified, and giving their opponent points.

There are also many penalties wrestlers can earn if they break certain rules while participating in a wrestling match. There is a large array of penalties a wrestler can be fouled for, and each one varies in the amount of points to be taken away depending on the penalty. One to two penalty points can be earned for a player based on certain infractions. A player may not illegally hold another player during a match, specifically any hold that may be deemed as dangerous by the referee. Wrestlers may not "flee the mat" which is where a player may force his opponent off the mat to avoid wrestling. Players may not grab clothing, mat, or headgear during a match. Wrestlers are also not allowed to lock or overlap their hands, meaning if a player is down on the mat to control their opponent they can not lock or overlap hands. Wrestlers may not leave the mat during a match without permission from the referee.

Players also are not allowed to be unnecessarily rough during matches or show unsportsmanlike conduct. If a player is stalling the match they are allowed one warning but the second time they will be penalized and points will be awarded. Wrestlers also can not start the game in the incorrect starting position or have a false start or else they will be penalized.

Overall penalties are possible in wrestling, especially when it is a match between two very strong players. However it is important for players to focus on using their skills to the best of their ability in order to win the match rather than relying on illegal tactics.

Multiple penalties are common within the competitive wrestling world, but are something that should be avoided at all costs due to the repercussions of them. The first and second time a player is penalized their opponent is awarded one point, the third time a player is penalized their opponent will be rewarded two points. These rules apply to wrestlers in the United States that attend college, high school, junior high, middle school, and youth wrestling. Any form of unnecessary roughness is a major rule wrestlers must not break during matches because it is hazardous to the well being of the opponent. A referee can indicate a "flagrant misconduct" signal, which is an automatic disqualification and a deduction of all team points that were earned during a wrestling event.

Players must try to avoid penalties because it risks them being disqualified and risking themselves and their team a victory at a tournament they are competing in.

How to Score Points

There are four different ways a wrestler can score points during a wrestling match. These ways are:

What warrants a disqualification for wrestling?

Any move that may cause harm to another wrestler during the match that is deemed as intentional by the referee may warrant a disqualification. Wrestlers that commit a penalty that seems to have the intention to hurt their opponent warrants disqualification, but it may also just result in points being awarded to the penalized wrestler's opponent. A player may also receive too many penalties or if a player does end up injured because of their opponent, that opponent will be disqualified resulting in an automatic win for the injured player.

How can a wrestler win a match?

A wrestler can win a match against their opponent in two main ways. First being if a wrestler pins down both of their opponent's shoulders for two seconds or longer they will automatically win the match. Another way is if the match runs its full allotted time, whichever wrestler has accumulated the most points in the end will win the match. Wrestlers can accumulate points through various moves such as the takedown and escape or by gaining points from penalties committed by their opponents.

What are the basic rules of wrestling?

The basic rules of wrestling involve the four different moves that you can use to win a match. These rules are known as: takedown, escape, reversal, and nearfall. Wrestlers must follow the guidelines of these moves in order to win a match, unable to follow these rules would result in a loss. Wrestlers must also follow penalty rules in order to avoid the opponent being rewarded more points.

Pages Related To What Are The Rules Of Wrestling?