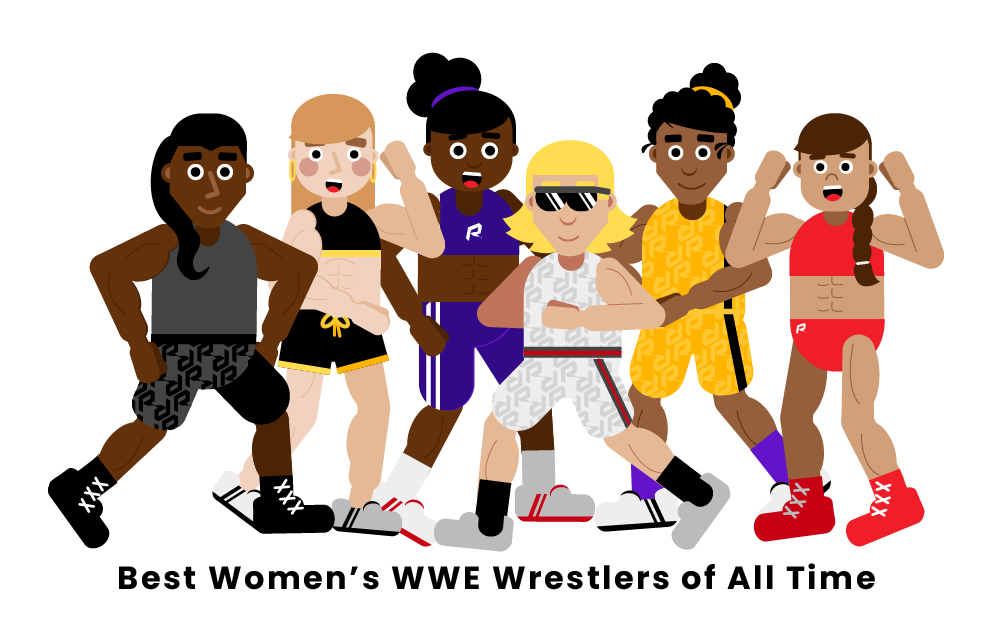 WWE has a tenuous history with the inclusion of women in wrestling. For years, female wrestlers have been shoehorned into stereotyped storylines and marginal roles. In 2015, a public outcry under the hashtag “#GiveDivasaChance” called for more screen time for female wrestlers. Since then, the women's category has evolved to include four titles (Raw, Smackdown, Tag Team, NXT). This article highlights the women that helped revolutionize women’s wrestling and are considered the best of all time.

Who are the best women’s WWE wrestlers of all time?

Trish Stratus is the perfect microcosm for WWE women’s wrestling. In her career, Stratus has bridged the gap between WWE’s blatantly sexist past and its hopeful future with respect to women’s wrestling. She started as a manager for tag team T&A and then had an angle where she was romantically involved with WWE owner Vince McMahon. Despite being exploited for her looks in the early part of her career, Stratus would develop into a trailblazer in the women's category.

Stratus had many iconic matches in her career. She defeated five other divas in a six pack challenge match to win her first Women's Championship at Survivor Series 2001. The following year, Stratus pushed the women’s division forward by competing in a hardcore match. Even after her 2013 Hall of Fame induction, Stratus continued to leave her mark on women’s wrestling. She was involved in WWE Evolution, the company’s first all-female pay-per-view and in 2019, fell to Charlotte Flair in her final WWE match.

While Stratus undoubtedly redefined women’s wrestling, Asuka set the standard. The Japanese-born wrestler brought a bruising style that featured stiff kicks and brutal submissions. In NXT, Asuka held the NXT women’s championship for 510 days, a record for that title and the eighth-longest streak in WWE history (man or woman). She remained undefeated in WWE for 914 days, going 244-0, a record that stands today.

When Asuka signed to the main roster, she continued to make history. She won the inaugural Women’s royal rumble match in 2018, eliminating three competitors and lasting nearly 20 minutes. She became the second-ever women's triple crown champion when she captured the Raw Women’s Championship on April 15th, 2020. She previously won the Smackdown Women’s Championship in 2018 and the WWE Tag Team Championship with Kairi Sane in 2019.

Sasha Banks’ unique blend of physical storytelling and in-ring technicality has made her one of the defining wrestlers of the women's revolution. Banks started her WWE career in NXT as one of the four horsewomen, composed of her, Charlotte Flair, Becky Lynch, and Bayley. Her feud with Bayley resulted in some of the most critically acclaimed matches in wrestling history. Their 2015 matches at NXT TakeOver Respect and Brooklyn earned 4.25 and 4.5 stars from Dave Meltzer, respectively.

Banks continued to deliver and break barriers. She was the first woman to headline a WWE pay-per-view alongside Flair at Hell in a Cell 2016. One of the most iconic moments of her career came in 2018 when she was introduced by her real-life cousin Snoop Dogg before her WrestleMania 32 Triple Threat Match against Flair and Becky Lynch for the newly minted WWE Women’s Championship. Banks carried the Raw Women’s Division, earning the Raw Women’s Championship five times to date. In 2021, Banks won an ESPY for headlining day one of WrestleMania 37 alongside Bianca Belair, the first time two women of color have headlined WWE’s premier event.

Lita, similar to her friend and rival Trish Stratus, was a talented wrestler in a time when women wrestlers weren’t valued like they are today. Lita started her career as the third member of Team Xtreme alongside Matt and Jeff Hardy in June 2000. Her edgy persona and her top-rope moonsault finisher made her a perfect match for the high-flying Hardy Boyz. Later that year, Lita captured her first of four Women's Championships by defeating Stephanie McMahon.

Despite Lita’s immense talent, she found herself in multiple soap opera-esque love triangle feuds, which detracted from her in-ring performances. One positive throughline in Lita’s career was her feuds with Stratus. From 2004 to 2006, Lita and Stratus met in four title matches. The two trailblazers would team up at Evolution 2018 and defeat Mickie James and Alicia Fox.

Beth Phoenix dominated the women’s division with her iconic “glam slam” finisher, where she would lift her opponent by a double chicken wing and slam them to the mat. Phoenix claimed her first WWE Women's Championship in 2007. In 2010, Phoenix became the second woman to compete in the Men’s Royal Rumble and had one of the best moments of the night by eliminating the Great Kahli, who stood 7’1”. Later that year, Phoenix would defeat longtime rival Michelle McCool at Extreme Rules 2010 in the namesake match. Phoenix was inducted to the WWE Hall of Fame in 2017 but made a small storyline return with her real-life husband Edge in 2022.

Charlotte Flair, the daughter of wrestling legend Ric Flair, is the face of WWE women’s wrestling today. Since her debut in 2012, Flair has collected 16 total (15 singles and one tag team) WWE championships across NXT, Smackdown, and Raw. As a member of the four horsewomen of NXT, Flair was at the forefront of the women's revolution. Flair became the first of the horsewomen to claim a championship on the main roster, winning the Divas Championship in 2015. Her “firsts” continued while on the main roster. She was the first woman to main event a pay-per-view (Hell in a Cell, 2016), the first Raw Women’s Champion (WrestleMania 32, 2016), and the first woman to main event at WrestleMania (vs. Rhonda Rousey and Becky Lynch, 2020).

Who is the best women’s WWE wrestler of all time?

Trish Stratus is the best women’s wrestler of all time. Stratus pushed the women's category to new heights with her feuds with Lita and her hardcore match with Victoria. She dominated the women’s division in the early 2000s on the way to capturing seven WWE Women’s Championships, the most by any woman up to that point. She was a trailblazer that paved the way for the Women’s Revolution and has fundamentally changed women’s wrestling.

What women’s wrestler has won the most WWE championships?

Charlotte Flair, nicknamed “The Queen,” has won the most WWE championships with 16 in her career, 15 singles titles and one tag team title. Flair won the Women’s Raw, Smackdown, NXT, and Tag Team titles to become the fourth woman ever to achieve the WWE Grand Slam. Flair has also won the Smackdown and Raw titles six times each, the most for each title.

What women’s wrestler has the most WWE match wins?

As of 2022, Natalya has the most WWE match wins with 641. The Canadian-born wrestler has been competing on the main roster since 2008. Natalya also holds women’s records for most WWE matches (1,137) and most pay-per-view matches (68). Natalya is a third-generation wrestler and is the daughter of Hall of Famer Jim Niedhart. Natalya is currently on the Smackdown brand.