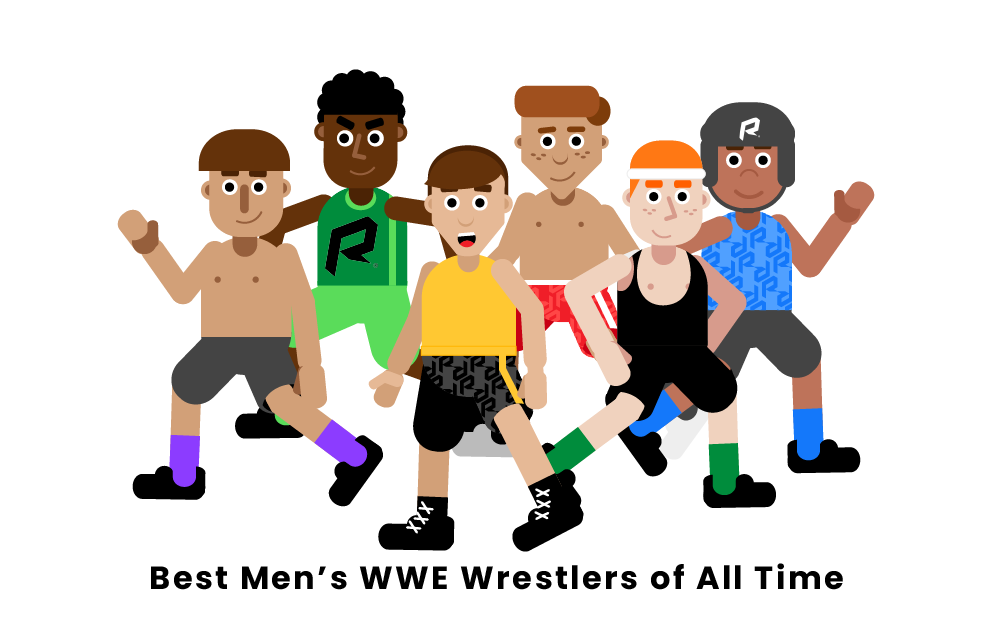 WWE Wrestling is a major source of entertainment for adults and children alike, full of exciting characters and intense wrestling battles that have created many enduring legacies. Among the various male wrestlers who have fought for WWE, a few stand out as examples of extreme athleticism, performance, and memorability. Here, we take a look at the top six best men’s WWE wrestlers of all time.

Who are the best men’s WWE wrestlers of all time?

Undoubtedly one of the most famous and memorable pro wrestlers of all time, “Stone Cold” Steve Austin first debuted for the WWE in January of 1996, appearing as “the Ringmaster.” However, he soon carved out a name for himself in the ring, taking on his own identity as Stone Cold Steve Austin. Also known as “the Texas Rattlesnake,” Steve Austin soon became a WWE Superstar, overcoming a dangerous neck injury in 1997 and proceeding to take his place as one of the organization’s top fighters, forming rivalries with various other wrestling legends, such as Bret Hart, Shawn Michaels, Dwayne “The Rock” Johnson, and even WWE CEO Vince McMahon, whom Austin once famously attacked with a “Stone Cold Stunner” during a feud. After appearing in Wrestlemania XIX in 2003, Steve Austin retired from official WWE competition but continued to make appearances. By his retirement, Austin had won six WWE Championships, two Intercontinental Championships, and three Royal Rumble events. He was inducted into the WWE Hall of Fame in 2009 and has appeared in many films and television series, including the host of The Steve Austin Show, a weekly podcast that aired from April 2013 through April 2020.

Perhaps even more well-known than “Stone Cold” Steve Austin, Dwayne “The Rock” Johnson has created an unmatchable legacy in the wrestling and entertainment worlds. Known to wrestling fans as “The Great One” and “The People’s Champion,” Johnson’s signature method of referring to himself in the third person, as well as his famous catchphrase, “Can you smell what the Rock is cooking?”, have embedded themselves in wrestling culture. A third-generation WWE Superstar, The Rock is the son of WWE Hall of Famer Rocky Johnson, and like his father, his career in the wrestling business was extraordinary.

Debuting at the 1996 Survivor Series, The Rock managed to win an astonishing eight WWE Championships in his career, as well as two WCW Championships, two Intercontinental Championships, one Royal Rumble competition, and many others. After his first retirement in 2004, Johnson went on to have a monumental film and television career, appearing in various blockbuster films such as the Fast & Furious franchise, Disney’s Moana, the Jumanji films, and countless others. He briefly unretired from wrestling in 2011 but recently officially retired in 2019.

Known for his famous high-kick finisher, “Sweet Chin Music,” Shawn Michaels is another of WWE’s most famous wrestling superstars. Hailing from San Antonio, Texas, Michaels began his wrestling career in the 1990s as part of a duo known as “The Rockers,” and later wreaked havoc in the ring as part of “D-Generation X,” a partnership formed with his longtime wrestling ally Triple H.

Known for his rebellious but charismatic nature, his leather chaps, and his cowboy hat, Shawn Michaels had many rivals over the years, but none of them were as long or as intense as his rivalry with the Undertaker. Though the two only fought in five matches, each of their bouts was an immediate classic in WWE history, particularly their legendary battle at Wrestlemania XXV. The following year, Michaels vowed to break the Undertaker’s undefeated streak at Wrestlemania XXVI, or to retire if he lost. After a grueling final match, Michaels was defeated, and he retired the following night, with The Undertaker appearing in the ring to salute him. Over the course of his wrestling career, Shawn Michaels won three WWE Championships, one World Championship, one European Championship, three Intercontinental Championships, and six Tag Team Championships. He was inducted into the WWE Hall of Fame in both 2011 and 2019.

The Undertaker’s fearsome presence was a staple of the WWE from 1990 to 2020, and few wrestling fans are unaware of the tremendous impact he has had on the sport. First appearing in the 1990 Survivor Series, Undertaker established an immediate rivalry with fellow wrestling legend Hulk Hogan and quickly created a name and reputation for himself as a devastating competitor. For decades, The Undertaker’s signature entrance music struck fear into the hearts of his opponents, and among his many accomplishments was an incredible 21-0 winning streak at Wrestlemania, which lasted from 1991 until 2014. Defeating wrestling legends such as Shawn Michaels, Triple H, Randy Orton, and many more, The Undertaker’s streak was finally broken by Brock Lesnar at Wrestlemania XXX.

Thirty years to the day after he first debuted in the WWE, The Undertaker retired from wrestling at the 2020 Survivor Series, bringing an end to his storied career. In his three decades of wrestling, The Undertaker won seven WWE Championships, one WWE Hardcore Championship, seven Tag Team Championships, and one Royal Rumble competition, among many other achievements.

One of the most enduring entertainers in WWE and wrestling history, Hulk Hogan is another name even most non-wrestling fans will be well aware of. Hogan’s long career, which reached its peak during the 1980s, was instrumental in broadening the appeal of the WWE, making it a worldwide source of entertainment. With a massive fanbase known as “Hulkamaniacs,” Hogan’s charismatic and blustery style captured the eyes of millions around the world, and led to success both inside and outside the ring. Among Hogan’s classic traits were his bright yellow-and-red clothing and enthusiastic American patriotism.

Over the years, he had many rivals, among them his three biggest enemies: “Rowdy” Roddy Piper, King Kong Bundy, and Ultimate Warrior. He had many memorable bouts with fighters such as Andre the Giant, Randy Savage, and Dwayne “The Rock” Johnson, and he even used his fame to start a villainous stint in the WCW during the 1990s. Returning to classic Hulk Hogan style in 2002, he won a final WWE Championship, was inducted into the WWE Hall of Fame, and retired a hero of the sport. Hogan returned to WWE in 2014 to host Wrestlemania XXX, and his career outside of the ring has involved numerous film and television appearances. His wrestling accolades include six WWE Championships, one Tag Team Championship, and one Royal Rumble competition.

Though he is younger than many of the other wrestlers on this list, no one can deny that John Cena has had one of the biggest impacts on WWE Wrestling of any male wrestler, and that fact is made all the more impressive because of his quick rise to fame. Debuting in 2002 in a challenging match against Kurt Angle, John Cena quickly impressed scores of young wrestling fans with his determination, grit, and refusal to back down from a fight. His aggressive and intense attitude earned Cena many detractors, who claimed he was too cocky and arrogant to be a champion, but he fought on nonetheless, earning his legacy as a top WWE Superstar in little time.

To this day, Cena’s “Cenation” fanbase is one of the largest in wrestling history, and he is known for his open call to any wrestler who wishes to challenge him in the ring. Cena’s unique charisma and talent has led him down a similar path to Dwayne “The Rock” Johnson, resulting in an extremely successful acting career, and even a music album. Recently, he has been praised for his role as the DC superhero Peacemaker in James Gunn’s The Suicide Squad, a role which earned his character an ongoing television series. In all, Cena’s wrestling career has also been monumental, resulting in a staggering thirteen WWE Championships, three World Heavyweight Championships, five United States Championships, four Tag Team Championships, one Royal Rumble competition, one Money in the Bank win, and various other accolades.

Who is the best men’s WWE wrestler of all time?

“Stone Cold'' Steve Austin is undoubtedly the most famous WWE men’s wrestler of all time. Between 1996 and 2003, Austin dominated the ring with his extreme blend of toughness, brutality, and brash attitude, winning six WWE Championships, two Intercontinental Championships, and three Royal Rumble events. His unique style marked the popular "Attitude Era" of the WWE, and continues to influence the sport to this day.

What men’s wrestler has won the most WWE Championships?

What men’s wrestler has the most WWE Wrestlemania wins?