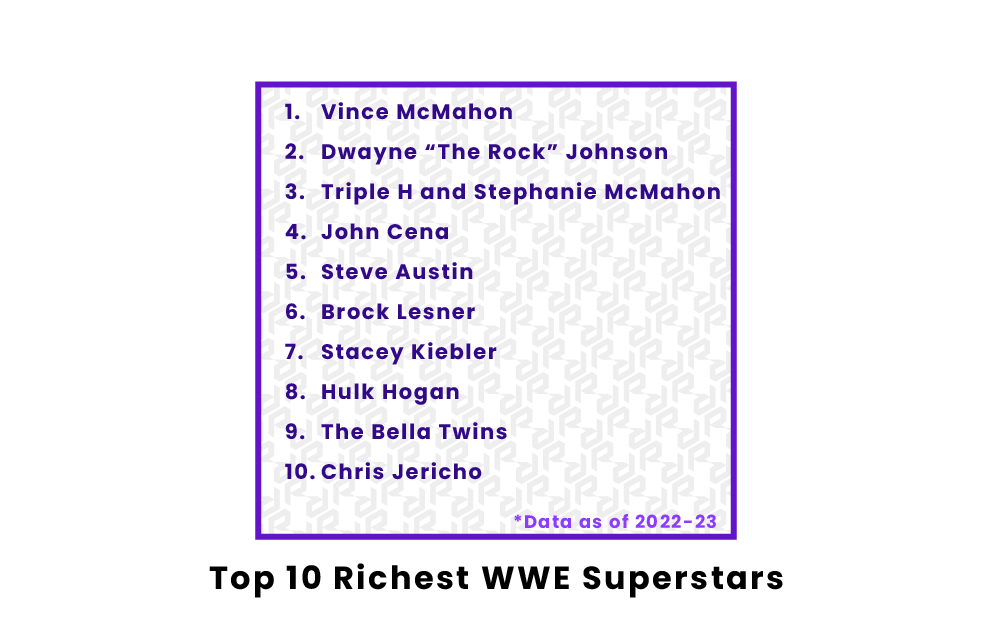 The WWE (World Wrestling Entertainment) has been a launchpad for international superstars since its reinvention in 1982. Aside from winning over the WWE’s own massive fanbase, some of its stars have had a broad impact on pop culture and become legends in their own right outside of the ring. Most of the wrestlers on our list accumulated their wealth by diversifying and maintaining multiple income streams even after retiring from the sport. Listed below are WWE’s top ten richest superstars.

Who are the richest WWE Superstars in the world?

Despite other wild WWE success stories, no net worth comes close to owner Vince McMahon’s estimated $2.4 billion. He was the villain audiences loved to hate for many years, carrying on a famous feud with crowd favorite “Stone Cold” Steve Austin. In 2022, he stepped down as CEO of the company after being accused of sexual harassment and misconduct. His daughter Stephanie McMahon now runs the company. Despite paying an estimated $14.6 million in settlements to the women he allegedly abused, McMahon still retains the majority share of the company and is the WWE’s only billionaire.

With an estimated net worth of $820 million, Dwayne “The Rock” Johnson stands leagues above his cohort as one of the richest professional wrestlers of all time. No one else from the WWE universe has experienced mainstream success at the level that The Rock has. He was able to transition to Hollywood with ease, starring in films like Get Smart, Moana, The Fast and the Furious, and Jumanji. He was also voted one of the 100 most influential people in the world by Time magazine in 2016 and 2019. His staggering annual earnings show no sign of slowing down as he continues to make a name for himself like no other WWE wrestler in history.

As one of the most successful WWE wrestlers of all time and the heir to her father Vince’s multi-billion dollar company, Triple H and Stephanie McMahon have a combined net worth of $150 million. Both are former wrestlers and even performed as a couple from 2013-2016. During this period, Triple H was reportedly one of the highest-paid WWE wrestlers, earning a whopping $15 million annual salary. However, Stephanie’s shares in the company account for the bulk of the couple’s impressive net worth, and both stars have transitioned to management. In 2022, Stephanie became CEO of the company after her father stepped down amid allegations of misconduct, and Triple H now serves as WWE’s Chief Content Officer and Head of Creative.

With an estimated net worth of $80 million, few WWE superstars have bridged the gap from WWE to mainstream fame as lucratively as John Cena. He is a record-holding 16-time WWE champion, as well as a prolific Hollywood name. He has starred in many movies, including Trainwreck, Blockers, Sisters, and The Wall, and earned himself a career as a bonafide movie star. He is, without a doubt, one of the richest professional wrestlers of all time and one of the most recognizable names from the WWE universe.

“Stone Cold” Steve Austin is one of the most notorious faces of the 90s “Attitude Era,” and has an estimated net worth of $35 million to prove it. His charisma, boldness, and everyman appeal garnered him a large international fanbase. Like many other wrestlers, the WWE also opened him up to many acting opportunities. He starred in movies like The Longest Yard and Expendables and even hosted his own reality competition show, Broken Skull Challenge. He’s also generated massive merchandise sales and, despite not actively wrestling anymore, still earns a yearly salary of $3 million.

With an estimated net worth of $28 million, Brock Lesnar is one of the most dominating physical specimens to set foot in the ring. He’s had a lengthy career with WWE, making his first appearance on the main roster in 2002. He took a long hiatus to compete in UFC and won the Heavyweight Championship in 2007. He then returned to WWE in 2012 and raked in an impressive $12 million annual salary, making him one of the highest-paid wrestlers of all time. As of 2022, he remains on the roster and still wrestles events from time to time, earning a remarkable payout each time.

Triple threat Stacey Kiebler is one of the richest WWE wrestlers of all time, having an estimated worth of $25 million. She had a relatively short wrestling career, though only performing for seven years before she retired in 2006. She quietly left WWE to pursue acting and modeling. She appeared on Dancing with the Stars and landed roles on several sitcoms, including How I Met Your Mother and George Lopez. It’s worth noting, however, that some percentage of Kiebler’s net worth is from her husband, technology entrepreneur Jared Pobre who she married in 2014.

Also with an estimated net worth of $25 million, Hulk Hogan ruled WWE in the 80s and 90s and is still one of the most recognizable faces of professional wrestling worldwide. At the height of his career, he was earning $10 million a year. However, like most wealthy wrestlers, Hogan’s income is heavily supplemented by endorsements and opportunities in entertainment. He starred in several movies and reality shows, including his own series Hogan Knows Best, and has made a fortune on his larger-than-life personality.21

With a combined net worth of $20 million, Nikki and Brie Bella were a successful tag team that transitioned their WWE careers into several other business opportunities. Both sisters are most known as former Divas Champions, with Nikki holding the record for the longest-reigning diva. They also starred in the reality series Total Divas and had several other entertainment roles that helped them land the big bucks. Since retiring from wrestling, the two still share several lucrative business ventures, including their podcast, YouTube channel, clothing line, and wine label.

Worth an estimated $18 million, Chris Jericho is widely regarded as one of the greatest wrestlers of all time. He was well-known for defeating giants like The Rock and “Stone Cold” Steve Austin throughout his lengthy career. Much of his success has also come from his ability to reinvent himself, and his activities outside of the ring are just as diversified as his in-ring personas. Aside from his incredibly lucrative wrestling career, Jericho’s high net worth is attributed to his band Fozzy, several book deals, and a highly successful podcast.

Who are the richest men’s WWE superstars in the world?

Vince McMahon,  Dwayne Johnson, and Triple H are the richest men’s WWE superstars in the world. Vince McMahon is the franchise’s only billionaire and the controversial former CEO of the company. Dwayne “The Rock” Johnson is a wrestler-turned-actor who made the majority of his fortune in acting; he was even the highest paid actor in 2022 according to Forbes. Triple H is a retired wrestler, a WWE favorite, who now works within the company and is married to current WWE CEO Stephanie McMahon.

Who are the richest women’s WWE superstars in the world?

Stephanie McMahon, Stacey Kiebler, and Maryse Ouellet are the richest women’s WWE superstars in the world. Women have had a complicated history at the WWE and in the wrestling world in general. For many years, they were nonexistent, used solely for aesthetics, or relegated to supporting roles. Wrestlers like Chyna, Trish Stratus, and Beth Phoenix helped fight for women to have a more meaningful place at the WWE, paving the way for today’s wrestlers to have better opportunities, showcase their athleticism, and accumulate wealth.