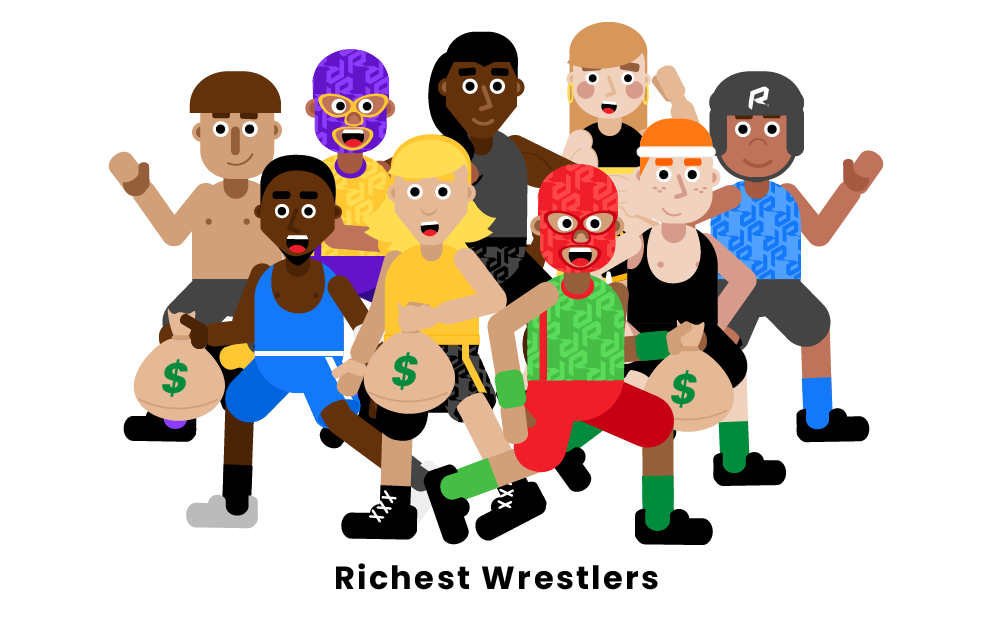 Organizations like the WWE have been creating larger-than-life personas for decades, and some of these wrestlers have become pop culture icons. Amongst these wrestling legends, a select few have become rich from their time spent in the ring. Read on to learn about the top ten richest wrestlers in the world.

Who are the all time richest wrestlers?

Vince McMahon is the richest wrestler in history with an estimated net worth of $2.3 billion. Vince is the CEO and chairman of the World Wrestling Entertainment (WWE) company. WWE brings in approximately $1 billion worth of revenue every year and now broadcasts in over 150 countries. In 1972, Vince joined his father’s company which was called the World Wrestling Federation at the time. Ten years later, he purchased the company and transformed it into a global phenomenon. He was also formerly a wrestler known as “Mr. McMahon” and participated in WWE.

Dwayne “The Rock” Johnson is the second richest wrestler as of 2020 with an estimated net worth of $320 million. He is a former wrestler and is currently known as an actor. He started his career as a professional wrestler in WWE in 1996. Over the years, “The Rock” has accumulated 17 championship titles. He is now known for his acting career in movies such as Baywatch, Jumanji, Fast and Furious series, and more. During his time, “The Rock” was one of the most beloved and popular wrestlers.

Stephanie McMahon is the third richest wrestler with an estimated net worth of $150 million. She is Vince McMahon’s daughter and a former wrestler. Currently, she is the chief brand officer for WWE. She held the WWF women’s championship once. She got engaged and married wrestler Triple H both on and off-screen. She has been known to make sporadic appearances on WWE Raw and Smackdown. McMahon has been working for WWE while growing up, taking up different roles such as model, receptionist, wrestler, and now a chief brand officer.

Paul Michael Levesque, also known by his ring name “Triple H,” is the fourth richest wrestler with an estimated net worth of $150 million. Triple H initially began his career in 1993 when he signed with World Championship Wrestling (WCW) and then signed with WWF in 1995. Triple H holds 14 world championships; he’s a five-time World Heavyweight champion and nine-time WWE champion. He is married to Stephanie McMahon, the chief brand officer of WWE. Outside of wrestling, Triple H has made multiple appearances on television and film.

John Cena is the fifth richest wrestler with an estimated net worth of $55 to $60 million., Cena began his professional wrestling career in 1999 with Ultimate Pro Wrestling but in 2001 signed a contract with WWE. He holds 21 championship titles, out of which 16 are world championships. 13 of those are WWE championships and the other three are World Heavyweight championships. John Cena has also appeared in movies such as 12 Rounds, The Marine, and Legendary. Cena is known for his catchphrase “You can’t see me.”

Steve Austin, also known as “Stone Cold” Steve Austin, is the sixth richest wrestler with an estimated net worth of $30 million., He is a former wrestler and began his career in 1989. He has wrestled for Extreme Championship Wrestling, World Championship Wrestling, and World Wrestling Federation/Entertainment. In 2003, he had to retire due to chronic injuries. He is known to be one of the most popular wrestlers in the history of WWE. He was the WWF Champion six times and WWF Intercontinental Champion two times.

Brock Lesnar is the seventh richest wrestler with an estimated net worth of $28 million. Lesnar is a wrestler for WWE and performs under Raw. He signed with WWE in 2000 and after debuting as the main roster in 2002, he won three WWE championships. Lesnar also pursued careers in mixed martial arts, UFC, and finally in 2006 signed with the Minnesota Vikings as a professional footballer. He once again signed with WWE in 2012 after taking an 8-year long hiatus. Since his return, he has won the WWE world championships four more times.

Hulk Hogan is the eighth richest wrestler with an estimated net worth of $25 million. Hogan is well known for his wrestling career at WWE, but he is also a television personality and actor. He was highly popular in the 1980s and 1990s in WWE and WCW. In 2005, he was inducted into the Hall of Fame at WWE. Hogan is a 12-time world champion with six WCW World Heavyweight championships and 6 WWE World championships. From 2010 to 2013, Hogan signed as an on-screen general manager with Total Nonstop Action Wrestling (TNA).

Kurt Angle is the ninth richest wrestler with an estimated net worth of $25 million. Angle is a retired professional wrestler and he was previously signed as an agent and producer for WWE. During the 1996 Summer Olympics, he won a freestyle wrestling gold medal. Angle has completed the amateur wrestling Grand Slam, making him one of the four people to do so. This includes NCAA, Junior Nationals, World Championships, and the Olympics. In 2016, he got inducted into the International Sports Hall of Fame for his success and achievements.

Chris Jericho is a Canadian-American wrestler who has been a part of the industry for over 25 years and carries a net worth of $18 million. Across his career, Jericho has wrestled in various leagues such as ECW, WCW, WWE, NJPW, and AEW. During his time throughout these various organizations, Jericho has secured 34 championships. This alone has allowed him to make quite the career for himself, however he is also part of a rock band known as Fozzy. The band has been together since 1999, and has played a secondary role in the formation of his substantial wealth.

The Undertaker is one of the most iconic names and brands in all of wrestling, and as such he has managed to accrue a net worth of approximately $17 million. He was a monumental figure in WWE for over thirty years, culminating in four WWE/WWF Championships, three World Heavyweight Championships, six WWF World Tag Team Championships, and much more. His long tenure in the WWE, which also resulted in his induction into the WWE Hall of Fame in 2022, has allowed him to put together a large net worth going into retirement.

Dave Bautista, also called “Batista,” is a former professional wrestler who is worth around $16 million. He competed in the WWE from 1999 to 2010, and has made a few returns to the ring since then. He was known for his animalistic style and hyper-aggressive persona. Bautista is a six-time world champion and even had a brief stint in mixed martial arts. Over the past half decade, Bautista has gained popularity as an actor, most notable for his role as Drax in Guardians of the Galaxy.

What are the major professional wrestling organizations?

In the United States, the major wrestling organizations are World Wrestling Entertainment (WWE), the National Wrestling Alliance (NWA), Ali Elite Wrestling (AEW) and Impact Wrestling. Out of these four, WWE is the largest organization and by far the most popular. WWE is signed with multiple major wrestlers, and are known for their alluring storylines. Fans all over the world are dedicated to watching WWE.

How do wrestlers from WWE make money?

WWE’s main roster players make a certain amount of money, roughly around $500,000. Top-performing wrestlers will make around seven figures. All wrestlers have a base salary, and that may increase or decrease depending on circumstances. They also make money from live events and are paid royalties. Overall, the majority of the money from WWE comes from live events and consumer products.

How many different WWE championships are there?