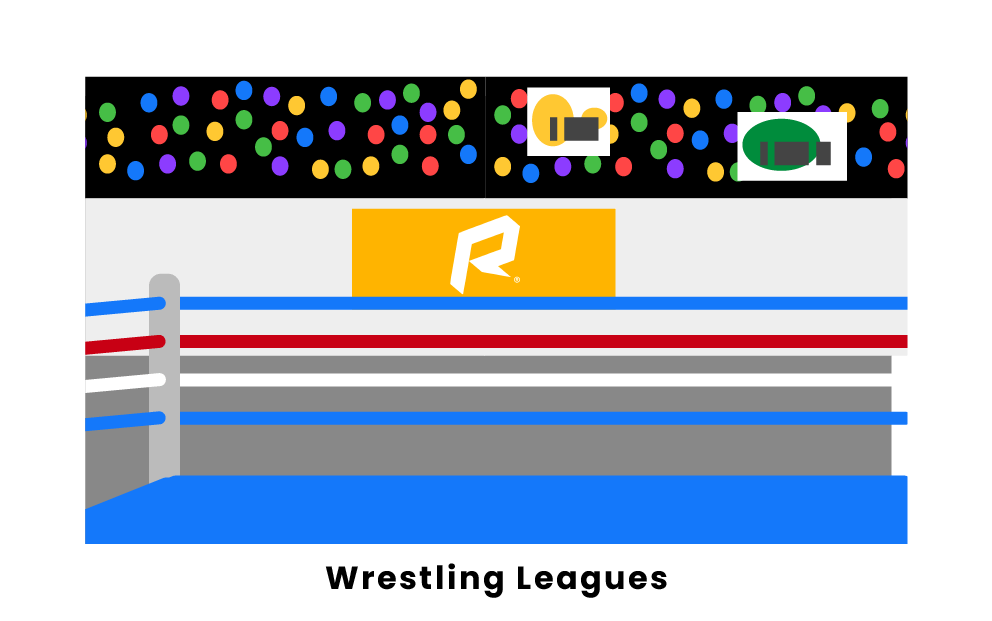 Wrestling leagues, also commonly referred to as wrestling "promotions," consist of any major media company or independent program that is created with the goals of providing wrestling content to fans of the sport and curating teams of wrestlers to deliver that content. Such content can consist of traditional wrestling matches, such as collegiate wrestling via the NCAA, to professional wrestling matches on a grand scale, such as programs run by WWE.

Wrestling leagues take on many forms, mainly due to their global historical context. Many different types of wrestling emerged throughout many civilizations, and it was believed to have originated over 5000 years ago. What can be considered "modern wrestling" was introduced in the early 20th century, as part of the 1912 Olympic Games in Stockholm. Thus, some of the first wrestling "leagues" were made up of the countries and their wrestlers who competed in official Olympic events.

There are many professional leagues in wrestling, and many have become household names. Some of the most well known and well regarded promotions in wrestling are listed below.

While we have covered the WWE and NJPW, not much has been said about the MLW, AEW, and Evolve. Despite their popularity not being as immense as the WWE, these other promotions have found niches within the wrestling community. Many offer different styles of wrestling, or simply a change of scenery from the bombastic shows of the WWE. Some of these leagues do have ties to the WWE. For example, Evolve has had their wrestlers premier on WWE programming.

In terms of professional wrestling, the WWE (which stands for World Wrestling Entertainment) is the largest and most popular wrestling promotion in the world. The WWE provides wrestling entertainment on a global scale, and has become somewhat synonymous with wrestling itself. Some popular WWE programs include WWE Smackdown, the WrestleMania series, the annual SummerSlam, and Raw.

As far as whose second in line to WWE, that would be NJPW (which stands for New Japan Pro Wrestling). The NJPW was founded in 1972 by a former WWE wrestler, and has since garnered a reputation of high prestige.

Outside of the professional wrestling scene, the NCAA has seen a respectable following for its collegiate wrestling events. Perhaps to their aid is the fact that the NCAA is made up of multiple conferences whose schools participate in wrestling activities, which amounts to the NCAA having hundreds of colleges with built in fan bases at their disposal.

While there is no one right way to start a wrestling league, there are a few things to keep in mind. Most importantly, the legality of your league is essential for maintaining a high level of respect throughout the industry and its regulators. Researching things such as taxes applicable to your business, athletic policy, and legal codes for the area in which your league will be established prior to forming your league are all important for ensuring its longevity and success.

Here is a list of some essential steps one should take in order to successfully create a wrestling league:

Wrestling seasons vary based on the level at which you are wrestling. Typically, high schools and colleges start the season at some point in September or October, although weight training often begins before then. The regular season will come to a close sometime in February, and championship meets will be held in March. A typical wrestling regular season at these levels lasts five months.

Surprisingly, professional wrestling does not experience a seasonal schedule similar to that of high school or college wrestling. Athletes in the professional wrestling circuit have no real off-season, and often tour and perform year round. Because of this, leagues such as the WWE have garnered a fair bit of criticism, as athletes are often pushed to their physical limits.

Cost To Join A Wrestling League

Luckily, for those eager to step into the world of wrestling while in high school, the cost to join these leagues is relatively cheap. Your school may ask that you pay a registration fee of some kind, but this and other upfront costs typically stay below $500.

However, wrestling also requires you to wear protective equipment and attire. Equipment costs may also be determined by the school system, or even required as a cost that the wrestler must make outside of the school system. Wrestling gear varies in price depending on the brand or the provider, and is an essential cost to keep in mind.

Club wrestling leagues typically vary more in price, depending on the prestige of the club and where it is located. The rates to be a member of a wrestling club usually use a monthly or annual payment system, though this cost may cover more than just membership (equipment, use of facilities, etc.). It is important to thoroughly research wrestling clubs in your area to compare general and price information.

Collegiate wrestling can vary heavily in many respects, as some colleges look for athletes at the high school level and offer them reduced tuitions or simply ask athletes to wrestle for them. On the flipside, some college wrestlers try out for the team once already at the university. Standard registration and general fees will be required for wrestlers at most universities.