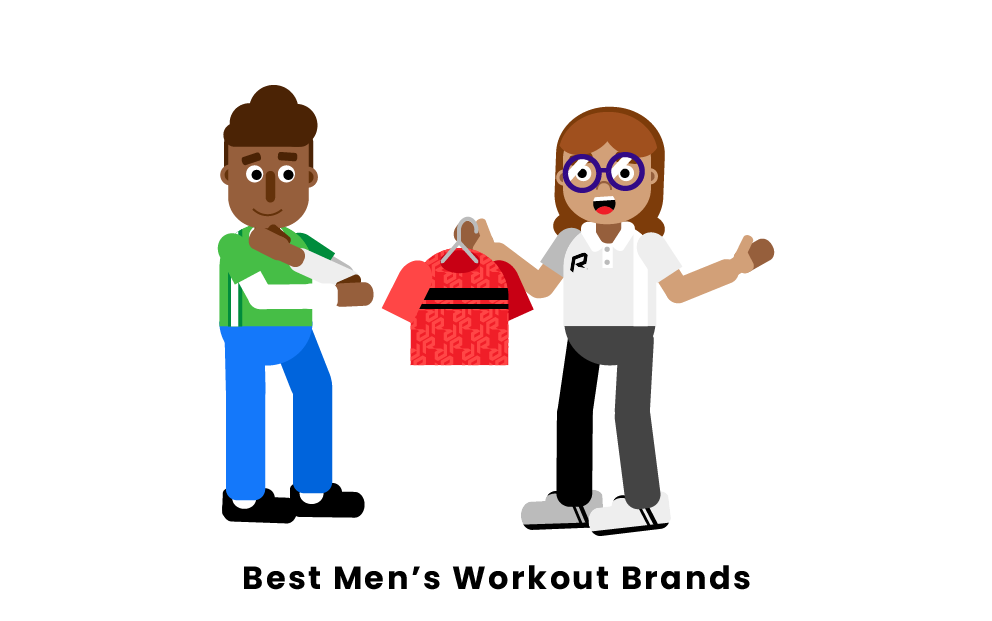 There are more ways than ever to work out, given the rise of at-home gym equipment and many unique training styles. One of the most important things any person needs for a workout is clothing designed to handle the workout. This list is a compilation of six of the best and most popular men's workout brands for clothing and apparel.

What are the most popular men's workout brands?

Gymshark is a fitness apparel brand started in 2012 in the United Kingdom by Ben Francis and a group of his high school friends. It began as a screenprinting operation out of a garage, but it has grown into a large international corporation with customers in over 130 countries. Gymshark is most well-known for its clothing items, like t-shirts, tank tops, sweatshirts, sweatpants, and shorts. The clothing items are designed to be worn while working out, but they also produce loungewear. One of their most popular items is a bodybuilding tank top known as a stringer. They also sell gym accessories like water bottles, duffel and gym bags, backpacks, socks, hats, and workout equipment. Gymshark doesn't sponsor many traditional athletes; they instead focus on sponsoring bodybuilders and fitness influencers that market their brand on social media. Some of their most famous sponsored athletes are David Laid, Steven Cao, and Steve Cook.

Nike first launched as a shoe company under the name Blue Ribbon Sports back in 1964. Phil Knight and Bill Bowerman of the track team at the University of Oregon had created the company to sell and distribute shoes from Japanese manufacturers, but they launched their own line of sneakers in 1971. The success of Nike shoes allowed them to begin acquiring other companies and producing clothing and apparel. One of the biggest reasons for Nike's extreme success was their partnership with Michael Jordan, which would later lead to the creation of one of the most successful subsidiary brands of all time, the Jordan brand. In addition to owning Jordan, Nike also owns Converse. Currently, Nike sells a variety of sneakers, ranging from basketball to track to cross-training to fashion, while also selling almost an incalculable number of different styles, clothing items, and accessories. The company is heavily involved in professional sports, sponsoring many of the world's most famous athletes as well as entire professional sports organizations. Some of Nike's current sponsored athletes include LeBron James, Alex Morgan, Kevin Durant, Chloe Kim, Mike Trout, and Odell Beckham Jr., among several others. Nike currently is the NFL and NBA's jersey sponsor, as they produce the uniforms for both leagues.

Chip Wilson founded Lululemon as a yoga-inspired fitness brand for women in Vancouver, Canada, in 1998. The company originally began as both a yoga and design studio, operating as a design company in the day and a yoga studio at night. Now, the company sells activewear and loungewear for both men and women. They produce t-shirts, sweatshirts, sweatpants, and shorts, all in a wide range of styles. Although the company's original focus was simply on athletic wear, they now produce clothing for other occasions, including button-down shirts, polos, and even bathing suits. Some of their most popular accessories are yoga mats, water bottles, gym bags, backpacks, and hats. Given that Lululemon originated as a leisure and lounge-style athletic wear company, most of their sponsorships are with athletes in more individual-oriented sports. Some of their most popular ambassadors are professional golfer Lydia Ko, competitive surfers Mark Healey and Malia Manuel, and marathon runners Charlie Dark and Rob Watson.

Under Armour was created in 1996 when University of Maryland football player Kevin Plank designed a new style of shirt that wouldn't get sweaty and bunch up under his gear. The company's very first product was a t-shirt nicknamed "The Shorty", which was a stretchy, skin-tight crop top that fit under football gear and wicked sweat. Under Armour then expanded its product line by creating two new clothing lines, HeatGear and ColdGear. In 2001, Under Armour became the official supplier of the NHL and signed a massive licensing deal with Major League Baseball. Under Armour eventually made its way into the footwear industry, starting with a launch of cleats in 2006. The company is similar to Nike because they offer an expansive selection of clothing items and shoes in almost every style, ranging from loungewear to workout clothing. They also offer a number of accessories like gym bags, gym equipment, water bottles, backpacks, hats, and a number of other products. Outside of their league and college team sponsorships, Under Armour sponsors some of the world's most popular and successful athletes including, Steph Curry, Tom Brady, Jordan Spieth, Michael Phelps, and Cam Newton.

In 1949, Adi Dassler founded the "Adi Dassler adidas Sportschuhfabrik" company in Germany. In the same year that the company launched, he designed a shoe that featured the classic three-stripe look that the brand still features today. The company's rise to fame was accelerated by its creation of cleats for the German National Soccer team to wear in its victory in the 1954 World Cup Final. Adidas would begin its journey into the clothing industry when it launched a tracksuit in 1967. Although Adidas is still most well-known for their sneakers, which range in use from pure fashion to running shoes and cleats, they produce a wide range of clothing items and accessories. Adidas produces t-shirts, jackets, golf shirts, sweatpants, joggers, shorts, and hoodies that all have several different designs and styles. Adidas sponsors a number of well-known athletes, most of which tend to be soccer players, including Lionel Messi, David Beckham, and Paul Pogba.

Rhone is a workout brand that was started in 2014, making it much newer than many other men's workout brands. Nate Checketts founded the brand based in Connecticut after receiving a pair of sweatpants that he determined were from a brand created for women. After conversations with his brother-in-law, they helped create a new style of workout clothing focused on men that were made with a special encapsulated silver thread, allowing the items to stay odor resistant for much longer than other workout clothing brands. Rhone sells a wide array of clothing items and styles. They produce t-shirts, tank tops, polos, button-downs, sweatshirts, jackets, sweatpants, shorts, underwear, socks, and even vests in several different styles. Due to the young age of Rhone and its diverse array of products, they haven't partnered with many famous athletes, instead opting for a social media marketing strategy.