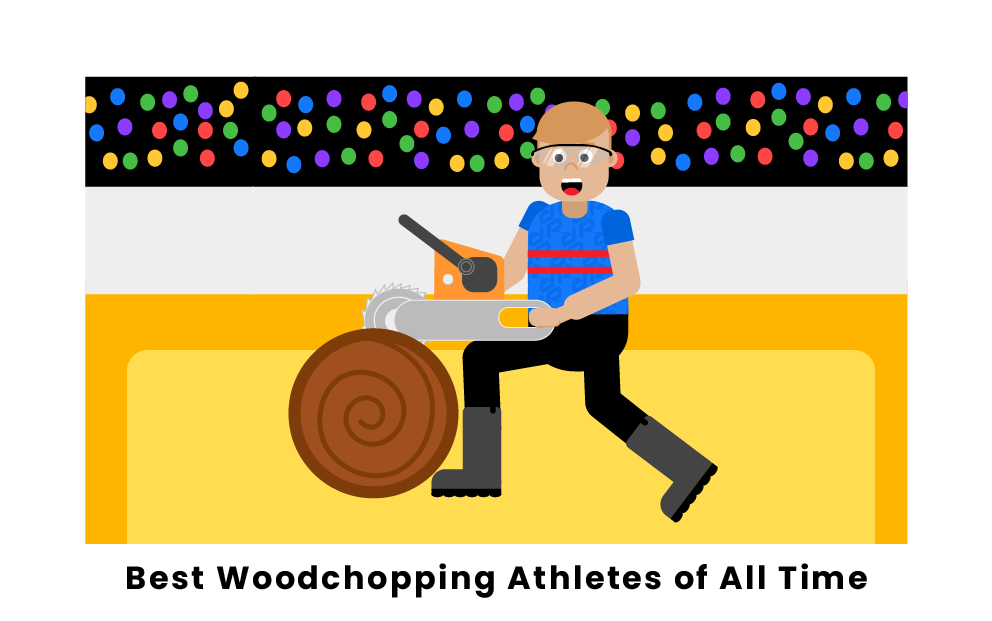 Timbersports feature some of the most high octane and entertaining athletes in six distinct disciplines; underhand chop, the stock saw, standing block chop, single buck, springboard chop, and hot saw. This list will highlight some of the best timbersport athletes ever to compete.

Who are the best timbersports athletes of all time?

Jason Wynyard is a New Zealand-born timbersports athlete and one of the best ever to compete. He has had numerous accolades over his illustrious career, including being a nine-time Individual World Champion, the 2011 Champions Trophy Winner, winning the National Championship in 2022, and the Team World Championship in 2017. On top of these impressive accolades, he also has won 14 STIHL Timbersports series titles and held the record for the STIHL Single Buck (with an assistant) event (9.39 Seconds), which he achieved in 2007 at the International USA Championship. Wynyard also holds world records for the Standing Block Chop event (12.11 Seconds) and the Single Buck event (9.395 Seconds).

Mel Lentz was one of the first great timbersport athletes that the world had ever seen, starting his career at age 20 and moving to Melbourne, Australia, in 1979 to train under a professional. He then went on to win the Sydney Royal Eastern show 15-inch underhand event, becoming the first American ever to do so and marking the beginning of a highly successful career. Melvin then competed in the first STIHL competition in 1985 and only took one year to earn his first victory in 1986; Melvin ended his career as a four-time STIHL World Champion and six-time STIHL Series Champion.

Matt Cougar is a highly decorated American professional timbersport athlete who also happens to be a RedBull sponsored athlete. Matt started his career at age 12 when he took sixth place in the chop contest at a youth competition, and less than two years later, he was coming in first against 18-year-olds; by age 23, he won his first STIHL US title in 2013. Cougar went on to win four more STIHL US titles and eventually set two separate records. He set the world record for the Standing Block Chop at only 11.03 seconds during the Individual World Championship in 2018 and the American Record for the Underhand Chop, done in 13.78 seconds and set in 2017.

David Bolstad is a New Zealand native pro timbersports athlete and one of the greatest that the sport has ever had the chance to witness. David had massive success over his career, including being a two-time STIHL Individual World Champion, winning back-to-back years in 2007 and 2008, winning the STIHL Individual World Championship five separate times, and being the World Championship runner-up another four times on top of that. His incredible career was recognized during his induction into the 2015 STIHL Hall of Fame, an award he was more than deserving of for his feats.

Rolin Eslinger was an American professional timbersports athlete and a mountain of a man, standing at an impressive 6 foot 4 inches tall and weighing 265 pounds; he was a literal and figurative giant of the timbersports world. Eslinger had numerous successes over his professional career, notably being a four-time US STIHL champion and winning the STIHL Championship Series an impressive three times over his illustrious career. He was not only recognized as one of the greatest by his peers, but he also was recognized professionally; Elsinger was inducted into the STIHL Hall of Fame as a part of the star-studded 2015 class.

Matt Bush is a United States-born timbersport athlete who competes at the professional level and, more often than not, succeeds, which is why he is on the list today. Bush is the 2005 STIHL Individual World Champion and a three-time STIHL National Champion, winning back-to-back in 1999 and 2000 and his third title in 2003. Bush also holds the world record for the Hot Saw discipline, which he set in 2003, taking only 5.085 seconds to cut through 19 inches. Matt Bush’s crowning moment of his career came in 2015 when he was inducted into the STIHL Hall of Fame.

Who is the best timbersports athlete of all time?

The best timbersports athlete of all time is an honor that falls upon Jason Wynyard. The New Zealander has an incredible amount of accolades collected over his career, such as winning the most STIHL Timbersports titles of all time, being a nine-time Individual World Champion, and being a member of the 2017 World Championship team. In addition, he also has three records to his name in the STIHL Single Buck with an assistant event (9.39 seconds), the Standing Block Chop (12.11 seconds), and Single Buck (9.395 seconds).

What timbersports athlete has won the most STIHL Timbersports titles of all time?

The STIHL Timbersports series competition is the highest professional competition for timber sports athletes. The athlete who holds the record for the most STIHL series titles of all time is timbersports legend, Jason Wynyard. Wynyard has won an astonishing fourteen STIHL Timbersport series titles. He won it four times from 1997 to 2000, then again in 2000, 2002, and 2006, before going on another streak of victories from 2009 to 2012, and then a final stretch of dominance from 2014 to 2017.

What timbersports athlete has set the most STIHL Timbersports records of all time?

Matt Cougar holds the most STIHL Timbersports records of all time; he has the STIHL USA record for four of the six main disciplines in timbersports. He set two records during the 2016 season, first in the Underhand Chop event, which he completed in 13.62 seconds in the qualifiers round, and the Springboard (two boards) record at 38.96 seconds set during the Championship round. He also holds the records for the Standing Block Chop, completed in 11.03  seconds, and the Stock Saw event in 10.89 seconds.

Pages Related to Top 6 Best Woodchopping Athletes of All Time