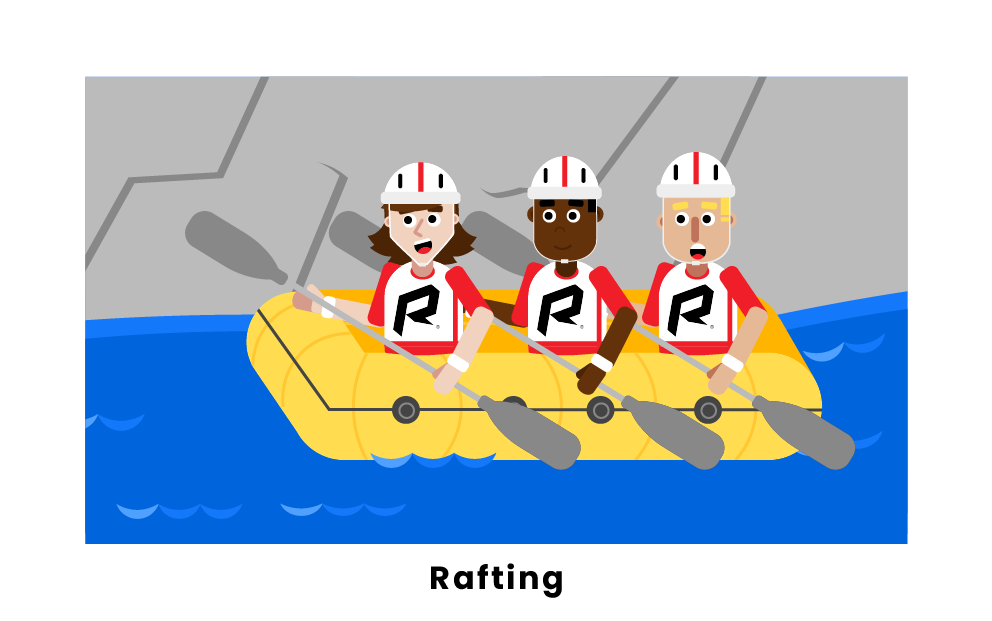 Rafting, also known as whitewater rafting, is a sport where teams of two to eight people in an inflated raft attempt to navigate fast-moving river rapids. A highly competitive and difficult sport, rafting can sometimes be dangerous and requires a great deal of cooperation and teamwork between the individual rafters. Modern whitewater rafting dates back to the year 1842 in which Lieutenant John Frémont, an American explorer and military officer. While exploring Colorado’s Platte River, Frémont and his fellow explorer, inventor Horace H. Day, created a rubber raft utilizing four rubber-cloth tubes and a wrap-around floor, the precursor of the modern inflatable raft. However, the first commercial whitewater rafting trip did not occur until 1940 on the Salmon River in Idaho.

After World War II, excess military rafts became a popular method of river travel, and in the 1950’s, John D. Rockefeller Jr. began to offer rafting trips down the Snake River in his newly-constructed Grand Teton National Park. In the 1960’s, whitewater rafting finally became a recreational sport, and attention was brought to various whitewater sports when kayak slalom was included in the 1972 Munich Summer Olympics. Modern whitewater rafting consists of two types of events: sprint, in which rafters must complete a course quickly using the best possible route, and slalom, where rafters must complete a series of winding turns through the rapids. Modern rafting is supervised by the International Rafting Federation (IRF), and the highest level event in the sport is the World Rafting Championships.

Rafting, also called whitewater rafting, is a sport where teams of people attempt to navigate an inflatable raft down a series of river rapids, often in the form of a race. Rafting is a challenging sport, as the fast-moving water makes navigating difficult, and the presence of jagged rocks can easily cause injury if a raft is capsized. Thus, rafting requires a great deal of teamwork and skill to be performed successfully and requires a lot of safety equipment.

Where are the best places for rafting in the world?

There are many popular places worldwide for whitewater rafting, some of which include Chile, Uganda, Costa Rica, Canada, and the United States. Chile’s Futaleufu River, located in the Andes Mountains, has many river rapids with Class IV drops, the third-highest class of difficulty in rafting. In Uganda, the White Nile River contains intense rapids after exiting the placid Lake Victoria, with some rising to Class V, expert-level rapids. The Pacuare River of Costa Rica features exciting rapids and views of tropical wildlife such as jaguars, monkeys, and exotic birds. In Canada, the Ottawa River contains a large variety of rapids tailored to rafters of many different skill levels. Finally, in the United States, the Colorado River, which runs through the Grand Canyon, offers intense Class IV-V rapids, along with hiking trails, ancient Native American ruins, and spectacular views of the Grand Canyon.

What equipment do I need for rafting?

A number of important pieces of equipment are needed to raft safely. Most importantly, the raft itself, which can fit anywhere from one to eight people, is made from tough, inflatable rubber. Oars and paddles are also needed to propel the raft through calm waters and help push off of rocks in rapids. Rafters themselves must wear life jackets and helmets while rafting to keep them afloat and protect their heads from rocks. Additional necessities for rafting include a raft repair kit, a first aid kit, sun protection, as well as appropriate clothing for warm or cold conditions, food, and camping supplies, depending on the rafting trip.

Pages Related to About Rafting