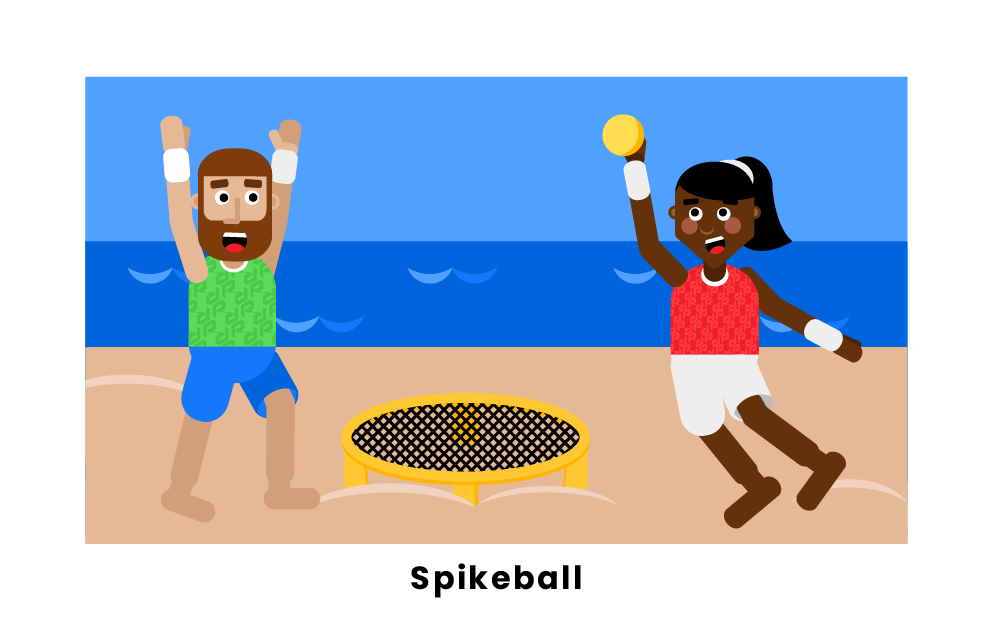 Spikeball, also known as roundball, is a popular outdoor game for both kids and adults. The game is designed for 4 players, but can also be played with 2 or 6. The game most closely resembles the sport volleyball and the game four square, but the gameplay and rules are very different. Keep reading to learn more about how to play!

Once you understand how to play, spikeball is very simple to learn. With four players split into two teams of two players, you will each stand around the circular spikeball net placed on the ground. A player on one of the teams will serve the ball by hitting it against their palm, aimed at the net. Once the ball bounces back up, the two players on the opposing team will have three touches to return the ball back to the net. They can hit the ball up, to their teammate, or directly back at the net to continue play. This is similar to volleyball, where players can bump the ball off of the hit, set up their teammate with a shot, and then spike the ball back.

Players will continue hitting the ball off the net to the opposite team for as long as possible, trying to score a point before the other team does. Players move around the net in a circular motion to hit shots, set up their teammate, or prevent the ball from hitting the ground. Teams earn points by hitting shots that the other team cannot return or forcing them to hit a bad shot, and the first team to 21 points wins.

Like other lawn games, spikeball has a lot of rules that are not always followed by recreational players. If you are interested in following the official rules set by the Spikeball Roundnet Association, here are some of the major ones to know:

While there are a lot of rules involved with the gameplay of spikeball, the scoring system is relatively simple. If the ball is not returned within 3 shots, hits the ground or the rim, bounces off the net and hits it again before it is touched, or rolls across the net, a point is awarded to the last team that successfully hit the ball off of the net. Games are typically played until one team reaches 21 points, but they must win by 2 points. 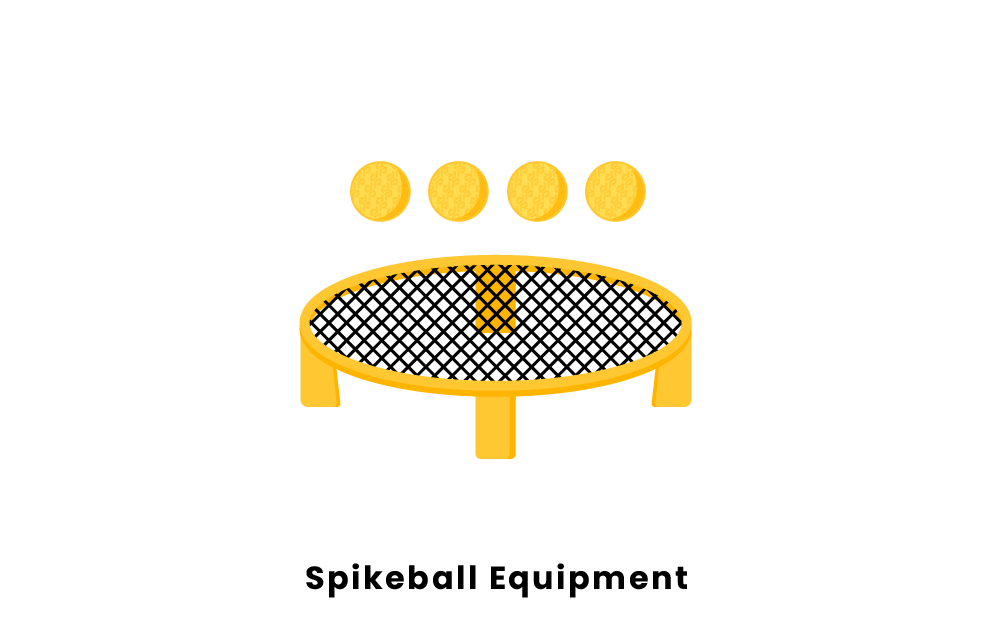 There is not much equipment involved in spikeball, making it an easy game to play! The only pieces of equipment you will need to play are the circular net, multiple balls to utilize while playing, and an open space to play. The spikeball net is 36 inches across in diameter, but some larger nets exist for beginner-level players. It stands on five legs to keep it off the ground so that the net can allow the balls to bounce off cleanly.

The balls used in spikeball are typically yellow, and have about a 12-inch circumference. Like the net, some larger balls exist for newer players. You only need one ball to play a game, but having a few extra will come in handy if any balls are lost.

Finally, you need an open space to play spikeball correctly. There is a lot of movement around the net that often involves diving or jumping to save balls from hitting the ground. Most people play the game on soft grass, but it can be played on sand or a carpeted floor, as well.

Can you play spikeball with two people?

Spikeball is designed to be played by four people, since teamwork allows for better shots and gameplay. However, it is possible to play with only two people. Players are still allowed to take three touches between shots, but they must alternate the hand hitting the ball each time. This can be very challenging and physically demanding, but is still a fun game to play with a family member or friend!

Can you play spikeball indoors?

Yes, you can play spikeball indoors, though it is generally harder to play than it would be outside. Make sure you have an area with high ceilings and a soft floor, since the ball can bounce pretty high when you hit it hard and you may want to dive to save some shots. Ensure that there are no sharp corners or objects that you could hurt yourself on before playing inside.

How much room do you need to play spikeball?

What ages can play spikeball?

For children who are very young, between the ages of 5-9, it can be difficult to play spikeball in the traditional way. There are beginner-level kits with larger nets and balls that make it easier to play, as long as they have a good understanding of what they need to do. The standard spikeball kit is generally designed for children who are 10 years of age or older.

Pages Related to What is Spikeball?