What are the rules of water polo? 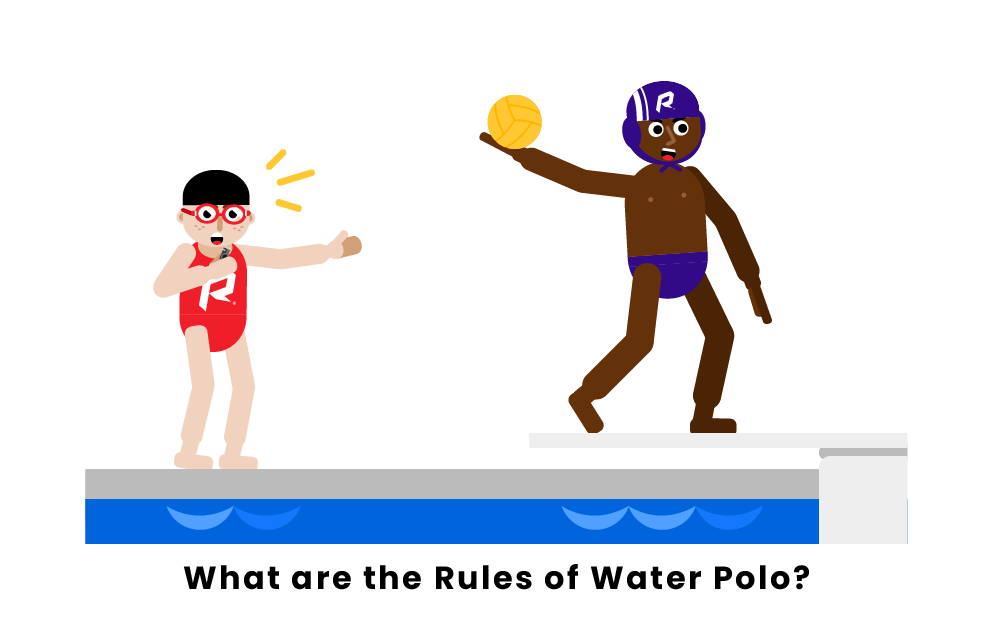 Water polo is unique compared to other sports, as it doesn’t have very many rules. In order for the game to be played, there must be 6 field players who play both offense and defense in the pool, and one goalie who defends the goal for each team. The playing field must be at least 25 yards long, 20 yards wide, and seven deep feet. Water polo games are divided into four 7-minute quarters. Field players cannot touch the bottom of the pool nor can they hang on the wall at any point during a quarter.

Each quarter begins with the teams lined up on opposing goal lines and this is the only time field players may touch the wall. The ref must drop the water in the middle of the pool while both teams sprint towards the ball and the first team to get to the ball is granted possession. Teams are allowed to substitute players after a goal is scored, between periods, or if a player is ejected from the game after fouling out.

Field players may only use one hand to pass, shoot, or catch the ball. Goalies are the only players that may touch the ball with two hands. Each team has 30-seconds to shoot the ball. If they do not shoot and regain possession or score a goal in those 30 seconds, it is a shot clock violation and the ball is turned over to the other team.

Minor fouls are frequent throughout a game and typically result in a free pass if called on a defender or a turnover when called on an offensive player. The most common minor foul occurs when a defender reaches over the player they are defending and makes contact with their body while trying to steal or reach the ball. On the offensive side, most minor offensive fouls occur when a player on offense pushes their defender to create space to shoot or pass, touches the ball with two hands, pushes the ball underwater, or goes within the 2 meter line without having possession of the ball.

Many major fouls result in ejections. These are more serious calls and result in a player being ejected from the game for 20 seconds or until the next goal is scored, whichever comes first. A player may also re-enter the game if there is a change in possession. The most common ejections are when a defensive player holds, sinks, or pulls back on an offensive player before they can possess the ball. Other fouls that result in an ejection are interfering with a free pass or talking back to the referee.

Penalties are another major foul in water polo. Penalties occur when a defensive player prevents a probable score by committing a foul within 5m of the goal. A penalty can also be called when the goalie or a defender pushes the ball underwater, if any player pulls or pushes down the goal, or when an offensive player who has possession of the ball while facing the goal is fouled by being held, sunk, or pulled back. Penalties result in the opposite team taking a free penalty shot from the 5m line. During the penalty shot, the player taking the throw is defended only by the goalie.

What is an ejection in water polo?

An ejection is the result of a major foul. The player who commits the foul is ejected from the game for 20 seconds or until the next goal is scored, whichever comes first. The ejected player must stay out of the playing field, on the outside of the lane lines running the length of the pool. At this point, the player might be substituted out of the game, but their substitute cannot enter the game until the ejection period is expired. If a player is ejected for brutality, intentionally harming an opposing player, they are ejected for the remainder of the game and their team may not substitute in another player, being forced to play the remainder of the game a man down.

What is a minor foul in water polo?

Minor fouls in water polo are lesser, more frequent fouls. These kinds of fouls typically result in an open pass for the player that was fouled if called on the defender or a turnover if called on the attacker. The most common minor foul is when the defender reaches over the player they are defending to try and grab or steal the ball away from them.

Can players touch the wall or bottom of the pool in water polo?

Players must tread for the entirety of the water polo game, which can be anywhere from 45 minutes to an hour. The only time a field player may hold onto the wall is at the beginning of each quarter before the referee drops the ball into the middle of the pool for the swim-off. If in the event that the pool is shallow enough on one-side for players to touch the bottom, only the goalie may touch the bottom, but it can actually hinder their ability to effectively goal tend.

Are water polo players allowed to touch the ball with two hands?

Pages Related to What are the rules of water polo?