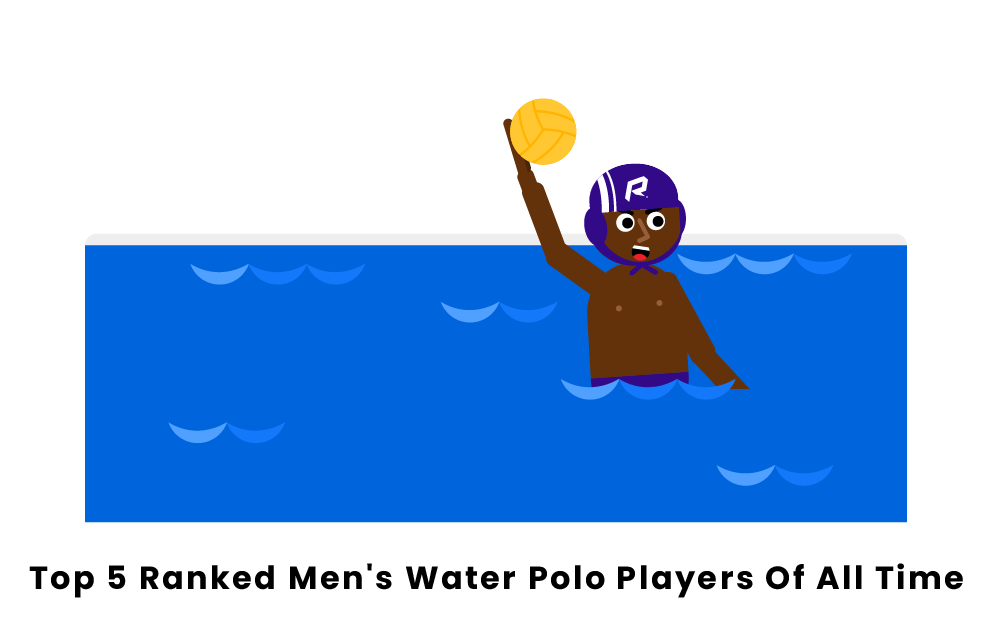 Even among Olympic sports, water polo is far and away one of the most intense team sports in the world. Players are tasked with fighting water resistance to surge up and down the pool in order to score goals. With such a strenuous nature to it, water polo has produced some of the best athletes the world has ever seen. Read on to learn about the best men’s water polo players of all time.

Who Are The Best Men’s Water Polo Players of All Time?

Dezso Gyarmati is hands down the most successful water polo player in the history of the Olympics. He has three gold medals, a silver medal, and a bronze medal. He is widely regarded as the most legendary water polo athlete of all time. As both a player and coach, he appeared in eight different Olympic Games with a total of four gold medals.

His first Olympic Gold came in 1952 in Helsinki, Finland. In the 1956 Melbourne Games, Gyarmati played a large role in what has gone down as one of the most famous matches of all time. In the semifinals against the USSR, during a time when the Soviet Army crushed the Hungarian Revolution, Gyarmati scored the first goal and was involved in the next three in what proved to be a victory for the Hungarians. The team then went on to win the gold medal for the second straight time.

After a bronze in 1960, Gyarmati and the Hungarians sought redemption at the 1964 Tokyo Games. He proved to be dominant in the final round, which included victories over Italy and the USSR, to give him a third gold medal.

Gyarmati then found great success as a coach, even leading the Hungarian National Team to a gold medal performance in the 1976 Olympics. He maintained a close link to water polo for the rest of his life.

Tony Azevedo was born in Rio De Janeiro but moved to California when he was only a month old. Suffering a near-death experience when he was four years old, doctors told his parents he would never be able to play sports. Despite that, he pushed against all odds and has gone on to become one of the best American water polo players of all time.

Azevedo attended Stanford University, where he won two NCAA National Championships and became the youngest member of the US Olympic team in 2000 at the age of 18. He also set an NCAA record with 332 goals, destroying the previous record of 235. Azevedo was the first player to win the legendary Peter Cutino Award four years in a row.

Azevedo was on every United States Olympic Team from 2000 to 2016 and was named captain in 2012. He played a large role in helping the team receive a silver medal in Beijing 2008, which was the country’s first medal since the 1988 games in Seoul. In 2004, Azevedo was named the American Water Polo Coaches Player of the Year for the fourth consecutive season. He also set a record in 2015 when he competed in his eighth FINA World Championship, the most out of any water polo player.  He also led the United States team to the championships in the Pan American games in 2011.

Aleksandar Šapić had a water polo career that lasted from 1993 until 2009, and he is one of the top athletes to ever play water polo for Serbia.

Šapić spent seven seasons in VK Becej, where he won six Yugoslav league titles and six Yugoslav Cups. He led the team to the 1990/2000 European Champions League title, as he scored five goals in the championship game. In 2006, he joined the Russian water polo club Shturm, which offered him $300,000 a season, making him the highest-paid water polo player in the world.

Still in the prime of his career, Dénes Varga has already made quite the name for himself. A member of the club team of Ferncvaros and representing the country of Hungary, Varga has found an immense amount of success in his young career.

Most recently, Varga led the Hungarian National Team to win the 2020 Men’s European Water Polo Championship held in Budapest, Hungary. In 2019, he was selected for the Total Waterpolo International best player award, as voted by 30 professionals and 18 editors and writers. Varga also led Ferncvaros to a perfect season in 2018, playing an instrumental role in leading the team to victory. He was also named the Male Water Polo player of the year in 2013 by the International Swimming Federation and the European Swimming Federation. In the 2013 World Championships, he was named the MVP. He was also the MVP of the European Championship in 2014 and then the MVP of the 2014 OB 1 League in Hungary.

Varga is a two-time Olympian, as he competed in the 2008 Beijing Games and the 2012 London games. In 2008, he scored a total of 10 goals and led Hungary to a gold medal against the United States in the final round.

A teammate of Gyarmati, Péter Rusorán was a renowned member of the Hungarian National Team. As a player, he won the Olympic gold medal at the 1964 Tokyo Games and also got the bronze at the 1960 Rome Games. He was also a part of the winning team in 1965 that took home the gold medal at the Summer Universiade in Budapest.

Born in Budapest, Rusorán began playing water polo at nine. In 1952, he joined the club Voros Meteor, where he played for nine years. He then played for Csepel Auto from 1961-1968 and Vasas SC from 1969 to the end of his career in 1972. In his final year with Vasas SC, he led the team to win the Hungarian national title.

Rusorán played in a total of 103 games for the Hungarian water polo team between 1959-1968. In the 1960 Olympic Games, where they won the bronze medal, he played in two matches and scored six goals. Four years later, the team won the gold medal. He was the best Hungarian scorer of that championship, with eight goals scored in six matches.

After he retired from professional water polo, Rusorán became the head coach for Vasas SC and led them to seven Hungarian Championship titles. They also won two European Championships on the continental level in 1980 and 1985. Whether it was as a coach or as a player, Rusorán proved to be one of the most noteworthy water polo names in history.

Manuel Estiarte is one of water polo’s most highly regarded and seasoned players. Originally born in Manresa, Spain, Estiarte joined the Spanish national team at only 15 years old. He represented his country for the next 23 years, claiming numerous victories and accolades. Estiarte played in a record six Olympic games in 1980, 1984, 1988, 1992, 1996, and 2000. He was often the team’s leading goal scorer and retired as the Olympics’ all-time leading goal scorer in men’s water polo, with a total of 127 goals. Impressively, Manuel Estiarte has one Olympic gold and silver medal, as well as a gold medal and two silver medals in the FINA World Championships. His longevity in the sport, along with his ability to drive his team to win, makes him one of water polo’s greatest athletes.

Tamás Kásás is a highly decorated Hungarian water polo player who retired after the 2012 Olympics. He is widely regarded as one of the top defensive players of all time. Besides just defense, he also had superior swim speed, shooting skills, and passing skills. From 1996 to 2012, Kásás played in five Olympic games and won three gold medals at the 2000, 2004, and 2008 Olympics. Throughout his career, he stacked up over twenty medals in other water polo tournaments, including the FINA World Championships, European Championships, and FINA World Cup.

Tibor Benedek was a Hungarian water polo player who was one of six players on the Hungarian National Team to win three Olympic gold medals. He joined the national team as a teenager and played with them for five different Olympic Games. He led the tournament in goals scored in both 1992 and 1996. Benedek ranks second in all-time Olympic men’s water polo goals and was named the Hungarian Water Polo Player of the Year in three consecutive years, from 1992 to 1994.

Which men’s water polo player has won the most Olympic medals?

With a total of three, there are ten different men’s water polo players who share the record for most Olympic gold medals. Out of these ten, six were members of the Hungarian Men’s Water Polo Team that won three consecutive gold medals from 2000-2008. However, there is one player who stands above the rest when it comes to overall medals earned. Deszo Gyarmati holds the record for most Olympic medals earned in men’s water polo, with three gold medals (1952, 1956, 1964), one silver medal (1948), and a bronze medal (1960). Gyarmati earned five Olympic medals representing Hungary, helping them become the most dominant country in the history of Olympic men’s water polo.

Who has the most goals in Olympic water polo history?

Manuel Estiarte of Spain is the leading goal scorer in Olympic men’s water polo history, with a total of 127 goals in 45 games. Estiarte played in six different Olympics from 1980 to 2000, taking home one gold medal and one silver medal during his Olympic career. He is far ahead of anyone else in terms of goals scored, nearly doubling the number of goals by the second-highest goal scorer, Tibor Benedek. Although Estiarte is now retired, it will certainly take some time for anyone to eclipse his record.

Which men’s water polo player has the most saves in Olympic water polo?

The Olympic men’s water polo player with the most saves is Stefano Tempesti, with a total of 87 saves on 147 shots. He completed this feat specifically at the 2012 Games in London. Tempesti represented Italy in five consecutive Olympics from 2000 to 2016, winning silver in 2012 and bronze in 2016. He also was the top goalkeeper in both the 2008 and 2012 Olympic Games.