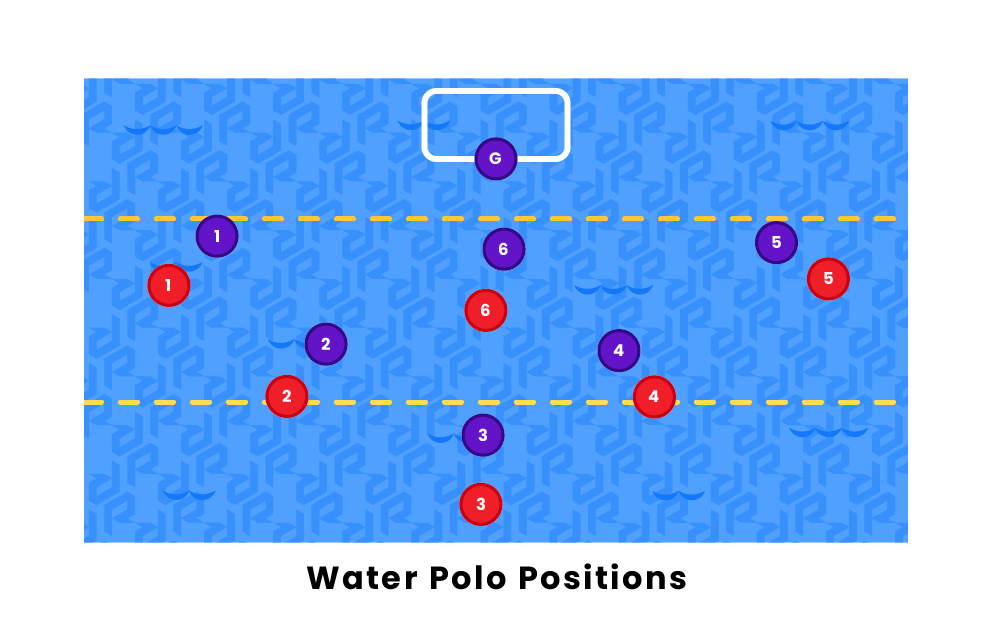 Water polo is relatively fluid when it comes to player positions. There are 14 players in the pool at once, seven for each team, including goalkeepers. Water polo is different from other sports because the pace and strategy of play require players to take up different positions at different points during a game.

What are the Positions in Water Polo?

There are seven main positions in water polo. These include: goalkeeper, left wing, left driver, point, right driver, right wing, and a center forward in the middle. These positions are all named after the initial position of each player when lining up on offense. Each position has its own roles and responsibilities, which are described below.

How are Players Positioned in Water Polo?

In water polo, there are certain positions that correlate to specific spots on offense or defense. Like other sports, these positions are indicated by both names and numbers for quicker recall. All six non-goalkeeping players for each team swim from one end of the pool to the other when possession of the ball changes teams. The one position that rarely moves is the goalkeeper.

As in other sports, there are different defensive approaches that can be taken, with some teams playing man-to-man defense and others opting for more of a zone or hybrid defense. Common to all defenses is the sentiment of getting in the lanes or directly in between the shooters and the goal. However, different defensive schemes may require defenders to switch around their positions. 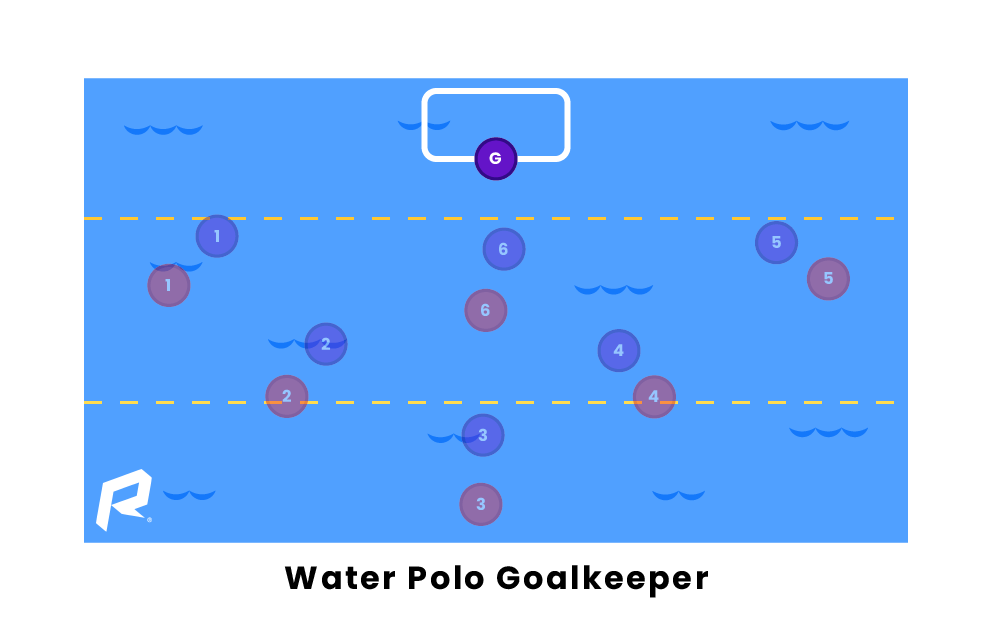 A good goalkeeper has to be incredibly athletic; the goalkeeper must be able to jump out of the water to track and save a shot. The goalkeeper is the only player allowed to use both hands or a clenched fist to control the ball. The goalie is not allowed to cross the halfway line of the pool and may not hold the ball underwater; this results in a five-meter throw (penalty shot) for the other team. 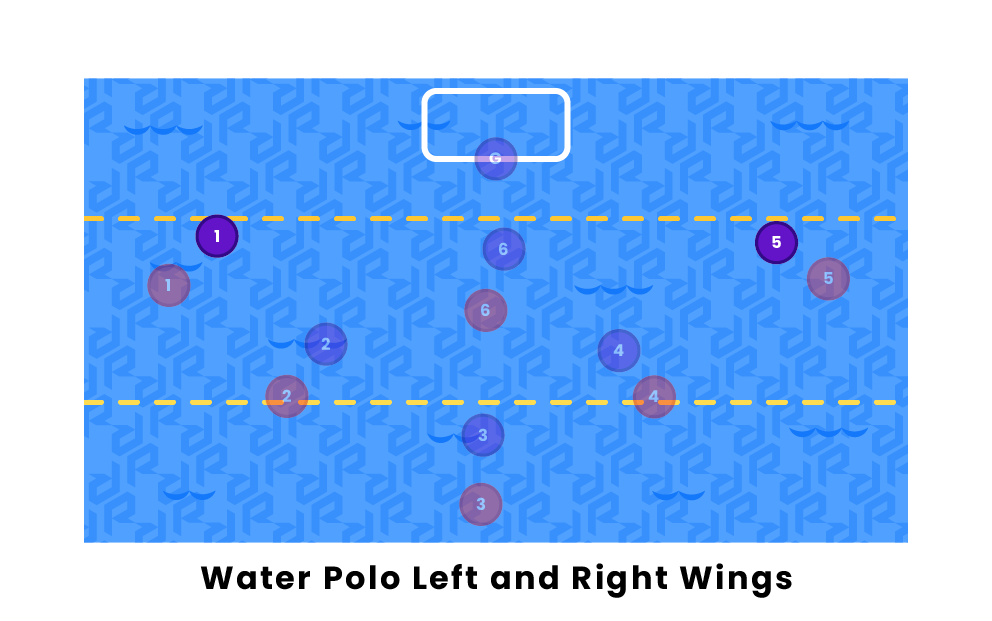 The left and right wing players must be quick movers and fast swimmers. They have the most ground to cover when possession changes, so they must act quickly to either get back on defense or present more attacking options. Left wingers are preferred to be right-handed, while right wingers are ideally left-handed. This is so that these players might cut back into the middle and get a better angle for shots at the cage. The wings initially guard the opposing team’s wings on defense, but offensive movements and defensive rotations can change this.

Size is not as much of a requirement for wing players as quickness of movement or arm strength is. These players need to be able to handle and distribute the ball, as well as participate in swift attacking movements and track back on defense to try and prevent breakaway chances by the opponent. 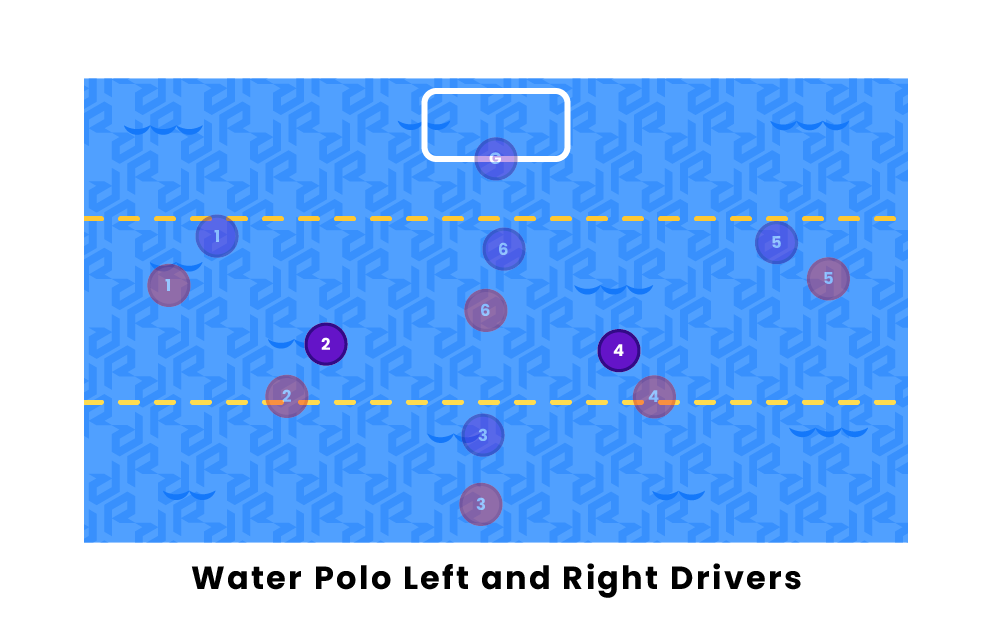 Drivers are positioned halfway in between the point (at the center) and the wings, who often start out at the two-meter line near the boundary. This position offers more advantageous shooting positions, but usually only from long range. Drivers are mainly used to feed the ball in towards the center forward.

It is not uncommon for one of the wings or drivers to tuck in and pair up with the center forward, essentially taking up spots in two post positions as part of a 4-2 offensive scheme. 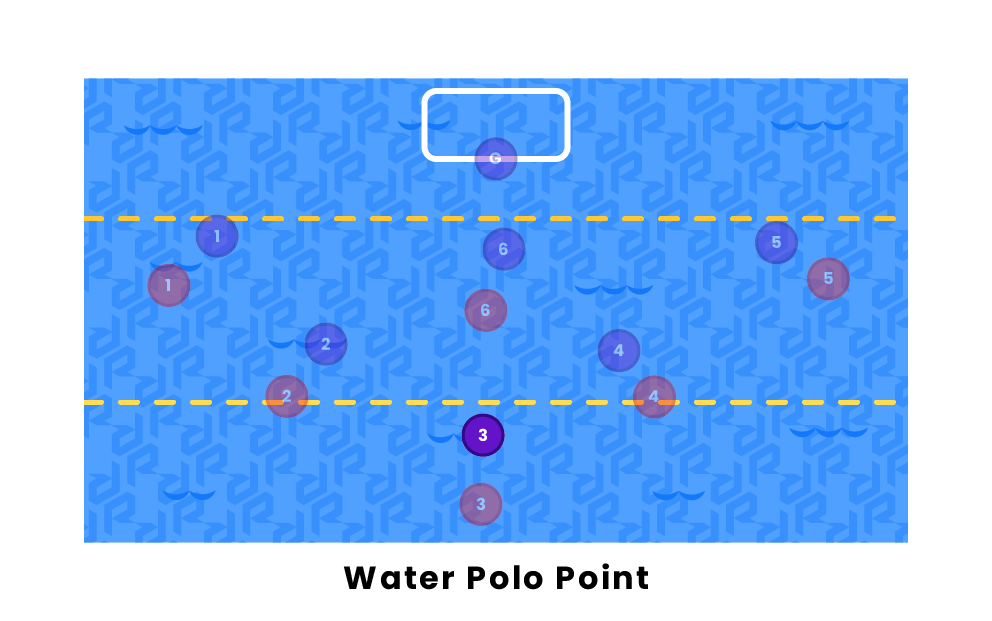 The player in the point position runs the offense. This player usually starts the attacking possession with the ball, directs the offense, and distributes the ball to teammates where necessary. The player in the point position should be experienced enough to recognize and exploit the defense’s weaknesses at will. The point player defends the opponent’s point on defense. This defensive role requires quick movements to block inside passes to the center forward. The point plays a similar offensive role to that of a point guard in basketball or a center back in handball, distributing the ball and leading the offense’s efforts. 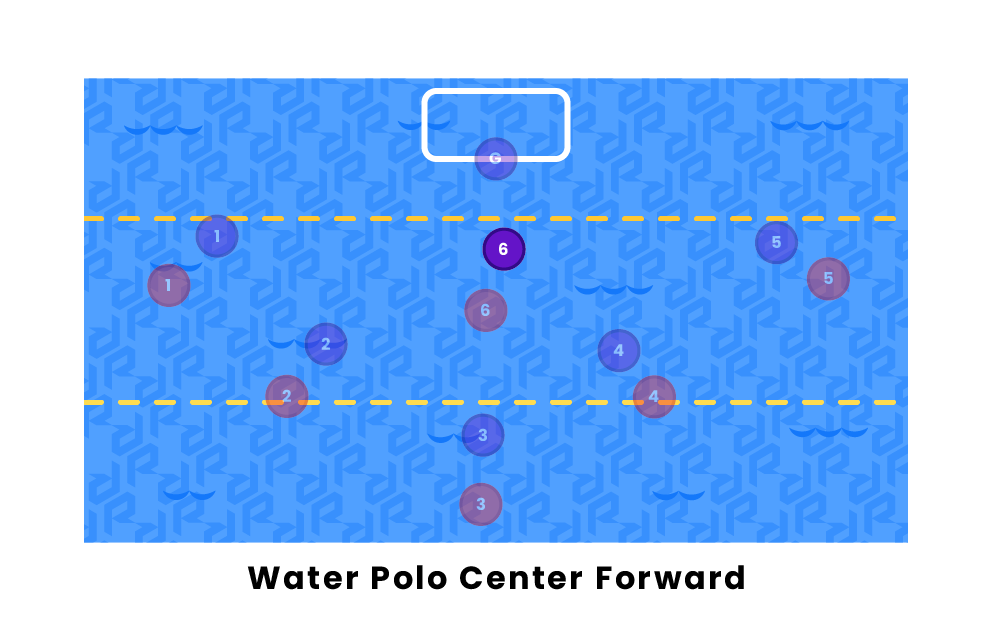 On offense, a team’s scoring prowess will heavily rely on the skill and effort of their center forward. Most of a team’s goals will be scored from this position. An ideal center forward is a player with creative flair and enough strength to receive the ball and get shots off from close range.

How many players are in a water polo game?

In water polo, there are seven players in the water for each water polo team at a time, including goalkeepers. Each side may have up to six substitutes. The goalkeepers usually stay in their team’s cage area so that one team attacks with six offensive players, while the team on defense has six of their own plus a goalie. This means there are usually 13 players on each side of the pool at a time with one goalie on the other side, although five-on-six matchups are common when players are penalized for committing a foul.

How many positions are there in water polo?

There are seven starting positions in water polo. There are, however, many more positions that players might be placed in due to shifts in offensive strategy. The main seven positions are as follows: goalkeeper, left wing, left driver, point, right driver, right wing, and a center forward in the middle. These position names indicate a player’s initial position when lining up on offense. Every listed position, except for the goalkeeper and center forward, are known as perimeter players due to their initial offensive positioning in a ring around the center forward.

What position in water polo scores the most goals?

While this isn’t always the case, the center forward will likely be the lead scorer on most teams. This is largely due to their positioning on the field of play, sitting between the goalie and the point defender. Center forwards will often find themselves in prime position to score, and most teams will thus make sure their center forward is one of the better shooters on the team to capitalize on these advantageous positions mid-game.