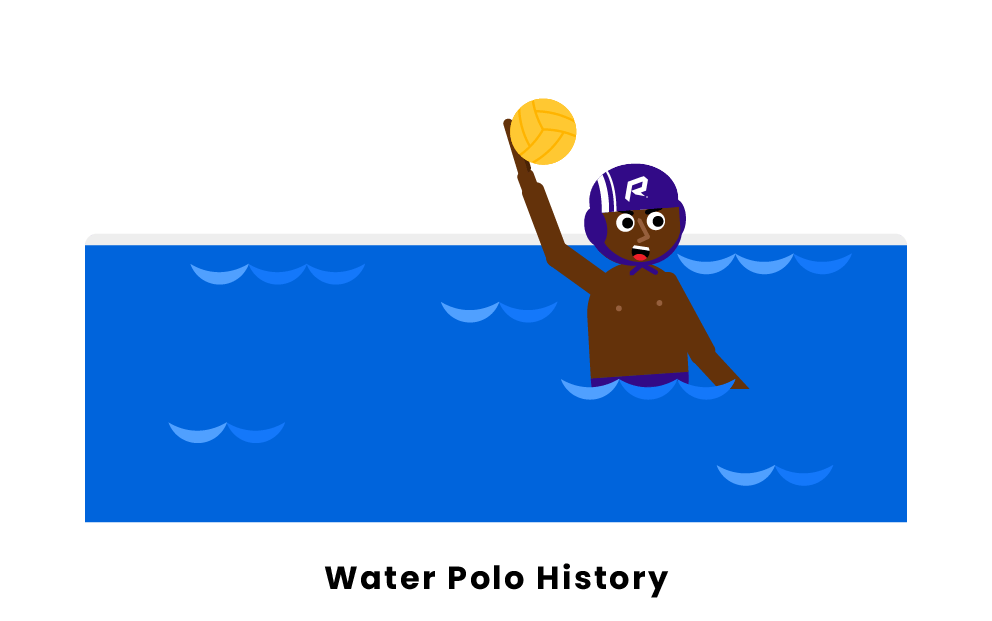 What are the basic rules of Water Polo?

Water Polo is a game played across the world that is very similar to the game of polo except there are no horses to ride, just water to swim in. The game is played in an olympic sized polo with a goal at each end of the pool where the objective is to score as many goals as possible. The game is played with 7 players on each team, 6 players out in the pool with 1 goalie standing guard. The ball used to play the game may be advanced through passing or dribbling motion and the ball can only be touched by one hand at a time by a player. There are a few different foul types including minor fouls, offensive fouls, and major fouls. Minor fouls happen often throughout a game and result in free passes for the offense while major fouls result in a player being removed for 20 seconds from play. Water polo can be an exciting game to watch and play, especially for those who are good swimmers.

Most of the early developments of the sport of water polo took place in the country of England. It is closed tied to the country of India as well, a colony of England at the time as the Indian word for ball is "pulu" which the English adapted into the game played with a ball, polo. Its name comes from the sport of polo played on horseback however that is the only similarity between the two sports between being played with a "pulu." The game that was created in England during this time is far from what we see that takes place in the pool in today's version of the game. The London Swimming Club began to create events surrounding this new sport and were pioneers in the early days of drumming up interest in this new activity.

Water polo in its earliest roots was not tied to one individual credited as the sole creator of the sport. However, a few decades into its existence a man by the name of William Wilson is given credit as the founder of the rules that governed the modern version of the game. Wilson was a Scottish swim instructor well known for his developments across aquatics. The rules that he wrote down for his newly created "aquatic football" game became what is today seen as the game of water polo. A different individual is credited with bringing the game to the United States, John Robinson, an English swim instructor. This took place soon after Wilson created the modern rules as the game was brought to the US shortly before the turn of the twentieth century. The game that Robinson brought to the United States was largely what became popular across the globe and was played slightly differently than its English counterpart.

When was Water Polo Established?

The sport of water polo was established in the mid to late nineteenth century and its developments soon after all took place rather quickly. Rules were formulated by the London Swimming Club in 1870 and the rules coming from William Wilson came about a decade later. Soon after this, the sport spread to the United States as well around 1888 brought by the aforementioned John Robinson. The sport spread rapidly establishing across many nations in the coming years and it was played in the Olympics game in the second modern Olympiad, the 1900 games in Paris. The roots of the sport were created across these three decades of time and they allowed water polo to flourish in the years after growing into a globally popular sport very quickly.

When did Water Polo Become Popular?

Water polo became immensely popular from its start across many different countries. The game was played in arenas such as Madison Square Garden and in Boston featuring crowds of thousands almost as soon as the sport landed on American soil. This development was not just in America either as water polo became the first team sport to be included in the Olympic Games starting in 1900 and it has been included ever since. The sport faced some changes after the first Olympic Games to its rules however this did not affect the sport's popularity which grew and is still a popular sport globally to this day.

The countries in the world that have some of the top water polo programs across both men's and women's include: