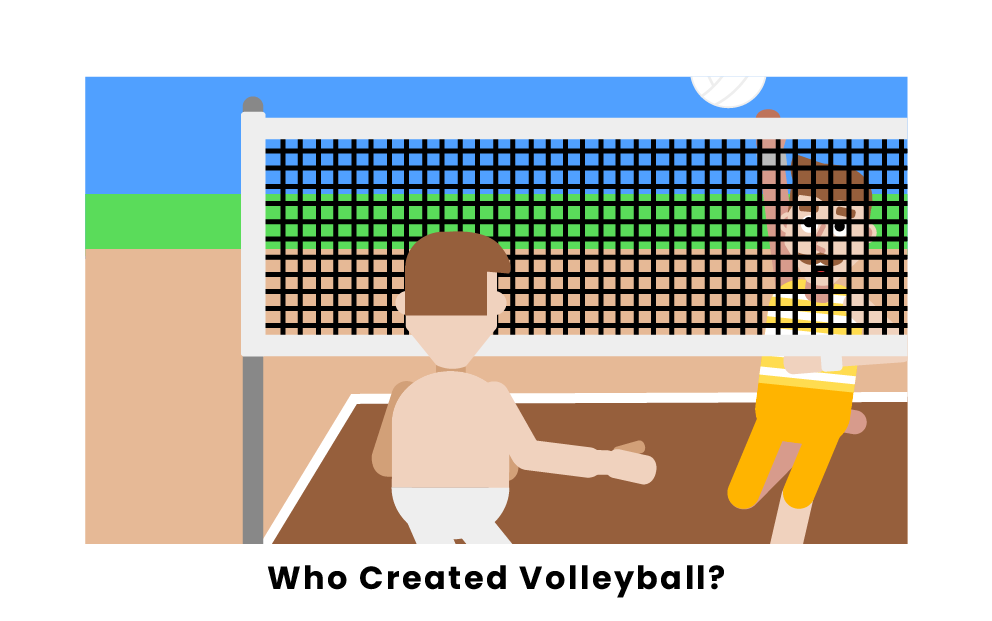 Volleyball is one of the most well-known sports of the modern age and is played worldwide in schools and professional leagues. However, many people don’t know the history of volleyball or the story of its creation. Who was the creator of volleyball, and where did he get the idea for the sport? Here we take a look at the fascinating history of volleyball, starting with the man who invented it, William G. Morgan.

William G. Morgan was born in New York in the year 1870 and was an athlete and lover of sports. Morgan attended the Springfield College of the YMCA (Young Men's Christian Association), where he met and befriended James Naismith. Naismith, who was eleven years older than Morgan, had made history in 1891 by inventing the sport of basketball, and after meeting him, Morgan became inspired to invent a sport of his own. Upon graduating from college, Morgan moved to the YMCA in Auburn, Maine, and again to Holyoke, Massachusetts, in 1895, serving as the director of physical education for that town’s YMCA. As the director of physical education, Morgan began to explore his interest in developing a program of sports classes for young men and had the opportunity to create and develop new sports as a result. It was here, in Holyoke, Massachusetts, that Morgan’s first ideas for the new sport of volleyball began to develop.

Upon achieving rapid success with his program for young male athletes, Morgan soon began to see a gap in his program that needed fixing. While the majority of his young athletes favored the new sport of basketball, Morgan saw that his older athletes needed a less intense sport to play. Short on options for less-violent sports, Morgan decided to invent one of his own by combining various aspects of other sports. He had initially considered tennis an option, but the amount of equipment necessary made it an impractical choice. However, Morgan liked the idea of a sport that included a net, and soon the idea of merging basketball and tennis led him to a new sport, which he initially named “mintonette.”

To design the sport, Morgan raised a tennis net approximately six feet off the ground and then practiced hitting a ball over it. He began with the air bladder inside of a basketball but found it to be too light and slow, while a full-sized basketball proved too heavy. To help, Morgan turned to the A.G. Spalding & Bros Company, who manufactured him a new type of ball at their factory in Chicopee, Massachusetts. The resulting ball was leather-covered, with a rubber inner tube, and was between 25 and 27 inches in circumference. The ball’s 9-12 ounce weight was perfect for hitting over the raised net and thus became the first volleyball.

After inventing the first volleyball, Morgan began to develop the rules of “mintonette” along with two of his friends, Dr. Frank Wood and John Lynch. In 1896, Morgan was invited to a YMCA conference in Springfield to demonstrate his new sport and brought along with him two five-man teams (one of which was captained by John Lynch) to demonstrate the 10 rules he, Wood, and Lynch had come up with. Morgan explained to the conference that his sport was designed for gymnasiums but could also be practiced outdoors.

After viewing the demonstration, the conference was impressed but suggested that the name of the sport be changed from “mintonette” to “volley ball,” in reference to the way the ball was volleyed back-and-forth by the two teams. Morgan accepted the name change, which has remained constant since then, with the only change being its shortening into one word, “volleyball,” in 1952.

The Growth of Volleyball

After Morgan’s presentation, volleyball was adopted by the YMCA as a sport practiced throughout all of their societies in America and Canada, which became the first non-American country to adopt volleyball in 1900. By 1913, volleyball had grown quickly, expanding to the Philippines, China, Japan, Burma (Myanmar), India, Mexico, South America, Europe, and Africa. In 1916, an article written by Robert C. Cubbon in the Spalding Volleyball Guide noted that there were around 200,000 volleyball players in America alone, both men and women. That same year, volleyball was officially adopted as a sport by the National Collegiate Athletic Association (NCAA), where it remains to this day.

After mainly being a leisure sport for many decades, volleyball took a major step forward in 1947 when the Federation Internationale De Volleyball (FIVB) was created. Two years later, in 1949, the first-ever Volleyball World Championships were held in Prague. Volleyball reached its biggest height as a sport in 1964, when it was first included as a sport in the Olympic Games in Tokyo. The sport remains in the Olympics to this day, with the additional inclusion of Beach Volleyball to the Olympic roster in 1996. Today, volleyball is played by an impressive 800 million people worldwide, proving that a sport with humble origins can easily take off and become an international treasure.

Who is the inventor of volleyball?

Volleyball was invented by William G. Morgan, an athlete and YMCA director from the United States. Morgan invented volleyball, which he originally called “mintonette,” as a sport for his program of athletic classes aimed at young men who were part of the YMCA Society in Holyoke, Massachusetts, where he worked. His invention quickly gained success and fame, leading to the volleyball we know today.

Where did volleyball originally come from?

Volleyball originated from William Morgan’s need to create a less intense and violent sport than basketball, which had been invented by his friend, James Naismith. Morgan saw that basketball was preferred by the younger men of his YMCA, but that the older men needed a less intense sport. To provide them with one, Morgan combined aspects of basketball with the sport of tennis, raising the tennis net and developing a new, smaller ball that could be easily volleyed over it. This led to the development of volleyball, whose rules were first written down in 1895 by Morgan, John Lynch, and Dr. Frank Wood.

What was the first volleyball made of?

The first volleyball was produced in 1895 by the A.G. Spalding & Bros Company of Chicopee, Massachusetts, whom William Morgan approached to create a new ball for his sport. Morgan needed a ball that was heavier than a basketball bladder–which was too light–but not as heavy as a full basketball, which was too hard to volley over a net. The resulting ball, produced in the A.G. Spalding & Bros factory, was a leather-covered ball with a rubber inner tube that weighed 9-12 ounces and was 25-27 inches in circumference. This became the first volleyball.

Pages Related to Who Created Volleyball?