Volleyball is one of the most popular sports in the world and has a presence on every continent. It can be played both indoors and outdoors and requires very little equipment to get started. Volleyball has evolved into an Olympic and professional sport since its inception over 100 years ago, and the sport continues to rise in popularity. Let’s take a look at what exactly the sport of volleyball is.

Volleyball is a team sport that generally takes place indoors. It is played with a ball on a rectangular, 18 meter by nine meter court that is divided in half by an elevated net. Each team plays on one side of the net and consists of six players. The game is broken down into sets and matches in which each team’s goal is to win enough points to win a set and then win enough sets to win the match. Beach volleyball is an internationally recognized sport with slightly different rules, though the base games are the same. Its first Olympic appearance was in 1996. 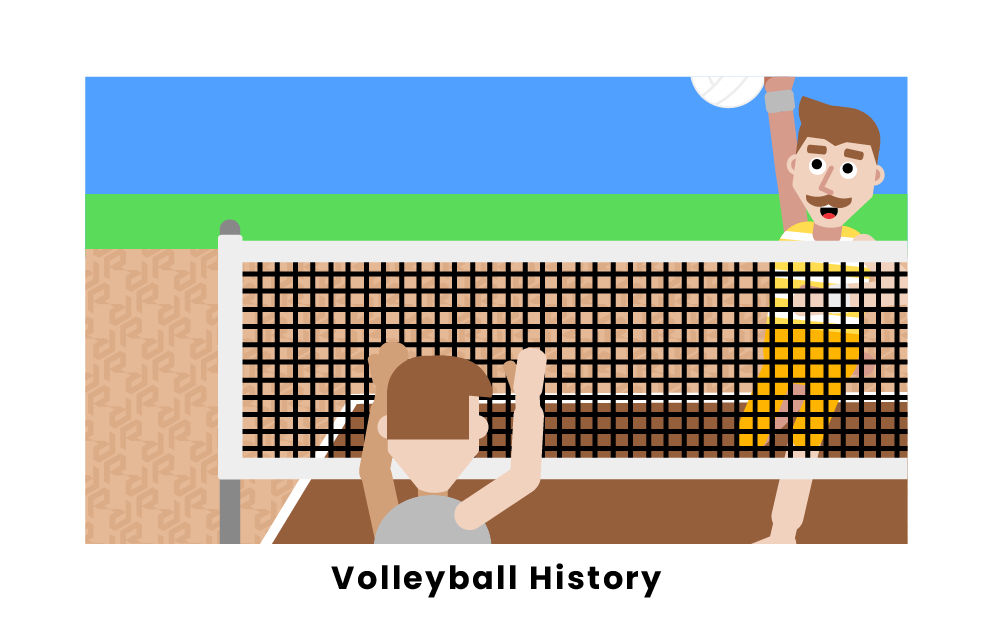 The creation of volleyball by William G. Morgan in Holyoke, Massachusetts came out of the need to give an older demographic a way to exercise without being too difficult to perform. Originally termed “Mintonette,” the game was renamed to volleyball soon after its inception as a sport.

There are two different playing surfaces in volleyball. There is the beach and there is a court. Obviously, in beach volleyball, the surface is leveled by sand. The height of the sand has to be at least 40 centimeters. In indoor volleyball, the game is played on a flat and horizontal surface. The surface must have light color and white colors are used to draw the lines on the playing surface. According to FIVB rules, only wooden or synthetic surfaces can be used for World and Official competitions.

Volleyball can be painful and sometimes even cause injury. It is important to have the proper equipment to make sure that you are always staying safe and are able to perform to the best of your ability. Important equipment includes: 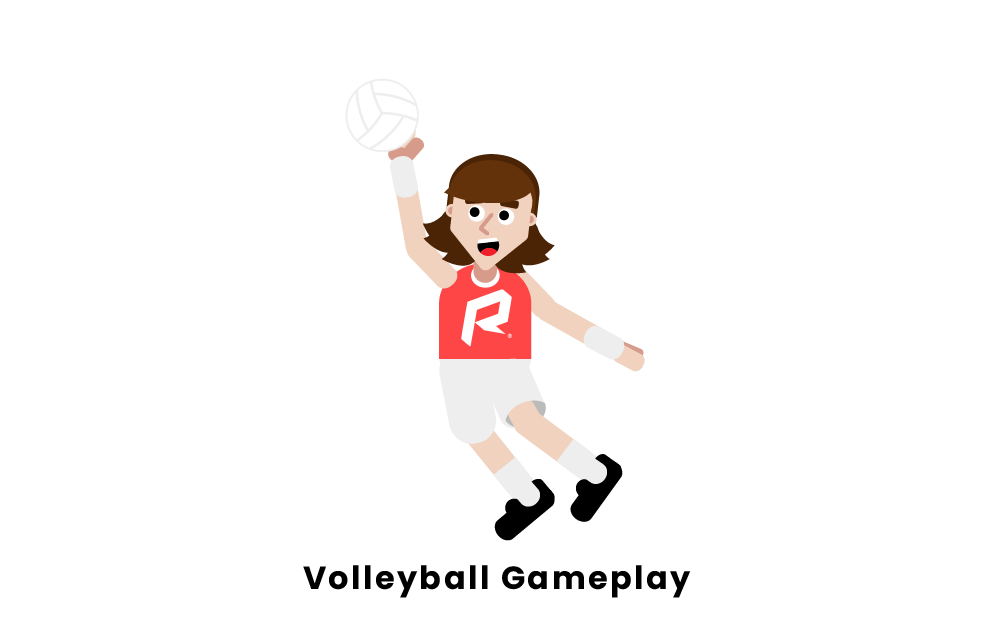 The objective of volleyball is to send the ball over the net in three hits or less so that the opposing team can’t return the ball or prevent it from hitting the ground in their court. Each team has three touches to attempt to return the ball. The game starts with a ball put into play by a serve that is hit by the server over the net to the opposing team. When the receiving team wins a turn (a volley) it will gain the right to serve and the players rotate one position clockwise.

Outside Hitter: Considered to be the focal point of the offense and completes most of the attack hits. The outside hitter is also one of the primary passers and plays in both the front and back row.

Opposite Hitter: This player tends to have the most versatility and can excel on both offense and defense. The opposite hitter also must have impressive jumping skills, and should be able to hit the ball from the front and back rows.

Setter: This is essentially the quarterback or point guard of the team. They must have strong communication skills as they direct the offense and make quick decisions on the court.

Middle Blocker/Hitter: This is typically where the team’s tallest athlete will play. They need to read the opponent’s hitters to set up blocks and use quick attacks on offense.

Libero: This is a position that focuses on defense, playing only in the back row and receiving the attack or serve. Players with good defensive and passing skills will find the most success at this position.

Defensive Specialist: This player will replace a player who may not have the skills for the back row. This position is limited to certain situations since it is dependent on the league's sub rules. 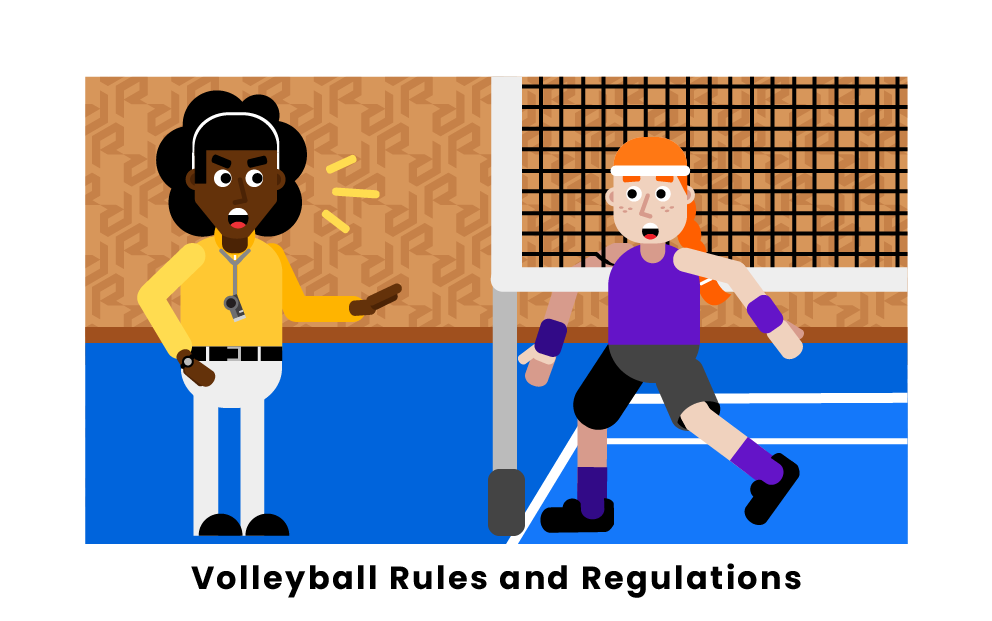 It must be noted that there are several very important rules that must be understood in order to effectively play the game of volleyball. For example, the ball cannot be hit by the same player twice in a row and can only be hit a maximum of three times by a team. After this, the ball must be hit over to the opposing team. The ball must also be hit rather than held and subsequently thrown. 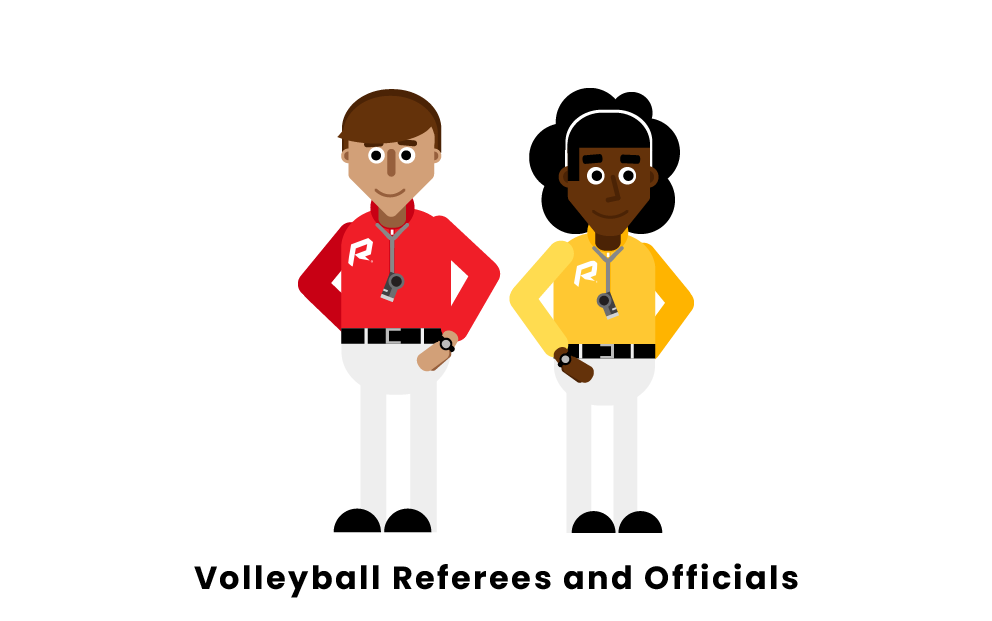 In volleyball, there is a first and second referee, as well as line referees. The first referee observes the action from a stanchion, which provides a clear view of what goes on above the net and down on the court. The second referee assists the first ref while at floor level. They are referred to as the “up referee,” and “down referee.”  The first referee watches for faults involving the ball, and the second referee will judge errors committed by the defending team. The line referees stand at opposite corners of the court and determine whether a ball has landed in or out. They also call foot faults on serves and watch the antennas on the net. 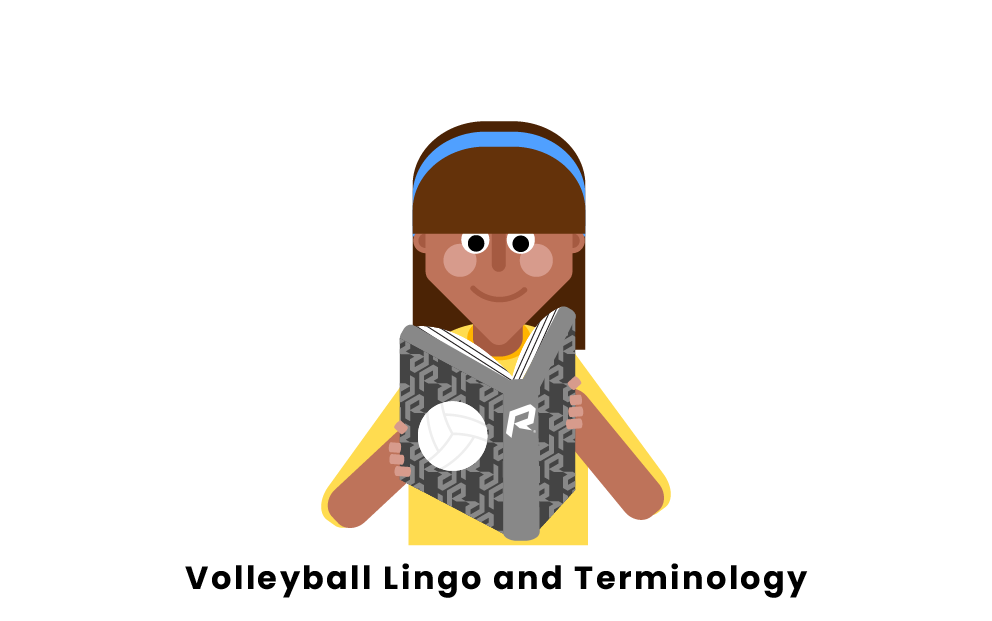 Knowing lingo and terminology is very important when watching or playing volleyball. To fully enjoy yourself and understand everything, you will need to know the lingo. Below are a few terms that are commonly used in the sport.

Ace: When a ball is served and it touches the ground without an opponent touching it or is unable to be kept in play

Kill: When an athlete hits, tips, or passes the ball to the other side of the net directly resulting in a point

Joust: Two players up at the net fighting for a ball at the top of the net

Dig: Occurs when the ball goes past the blocker, and the defender gets the ball before it touches the ground

Shank: Bad pass that flies into the audience or anywhere it was not intended to go to 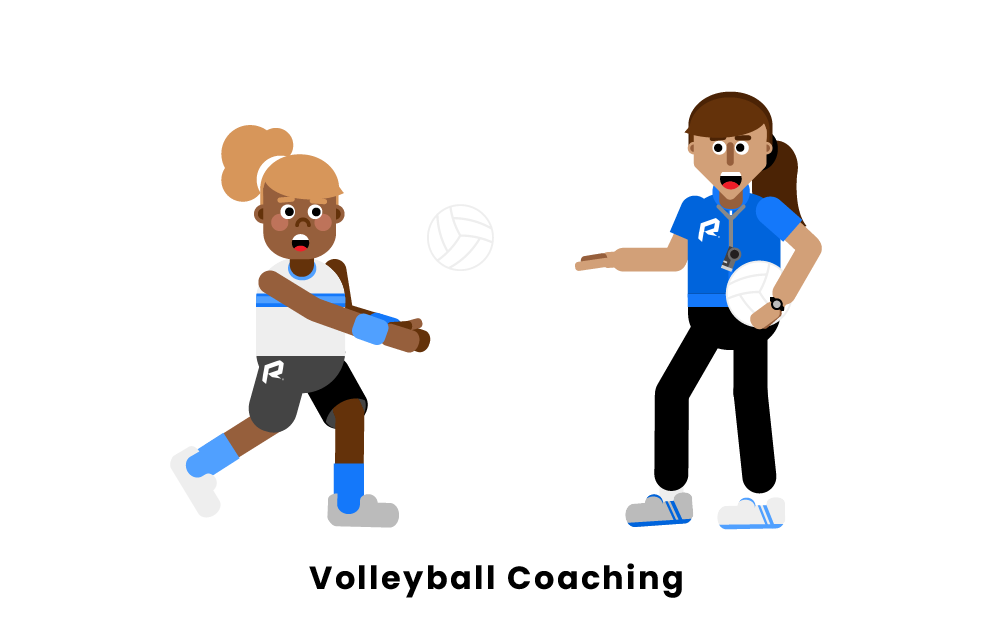 A coach needs to have great knowledge about the game of volleyball. They must be prepared for every practice and match to make sure that their players perform to the best of their abilities. The coach also must be able to treat their athletes with respect and support them no matter what. A good player-coach relationship is extremely important as it will often lead to the player performing better. Terry Liskevych, Mike Herbert, Russ Rose, and Doug Beal are among the top volleyball coaches. 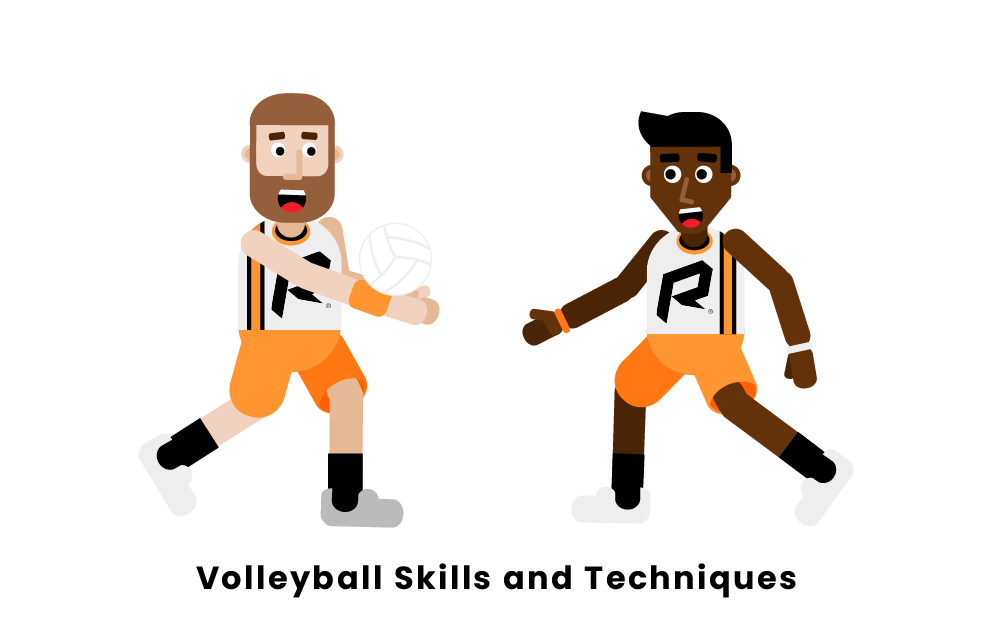 In volleyball, getting the ball to land on the other side of the net inbounds or forcing a hit by the opposing team that results in the ball landing out of bounds is dependent on a few basic skills. These include serving, passing, blocking, setting, spiking, and digging. Each of these skills are used in different scenarios throughout the game. 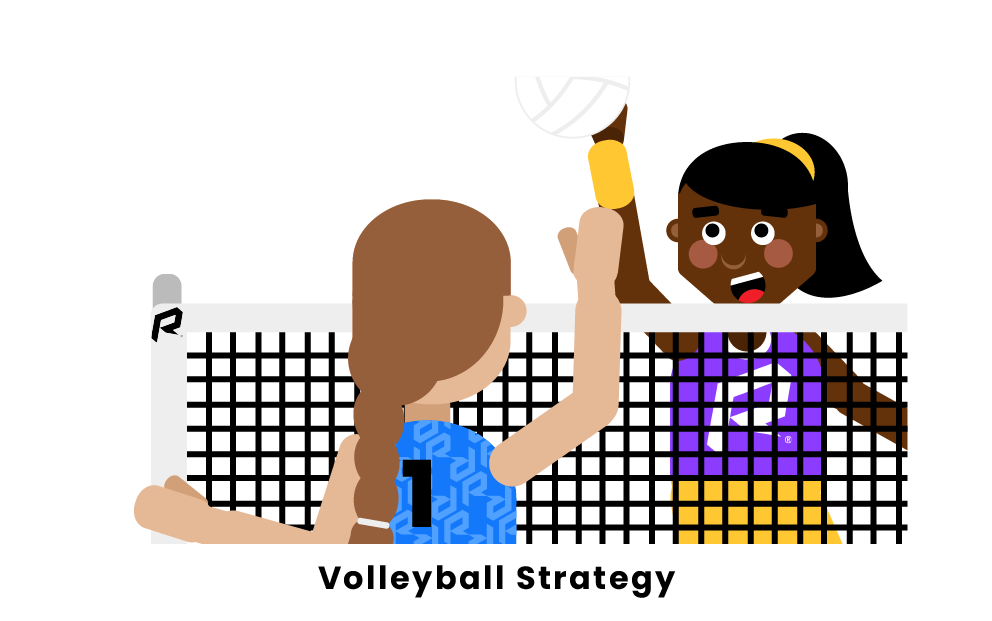 Strategies are extremely important for volleyball teams in order to emerge victorious in their matches. Without a set strategy, it will be very hard to find success in a match. There are plays and formations that a team needs to have mastered.

Passing and setting are essential for a team’s success. The ball must be passed around to a setter so he or she can focus on getting the ball into the air. Setting is when the ball is controlled for the positioning of attack. Forward setting or backward setting and volleyball are the popular strategies.

Attacking is the final shot in a sequence and among the most important. Dinks, spikes, dunks, dips, are effective shots that can give your team the point.

There are three main types of formations for most teams. They are 4-2, 6-2, and 5-1. Beginners often use a 4-2 with four attackers and two setters. An advanced team will use a 5-1 formation with a single setter and five attackers. 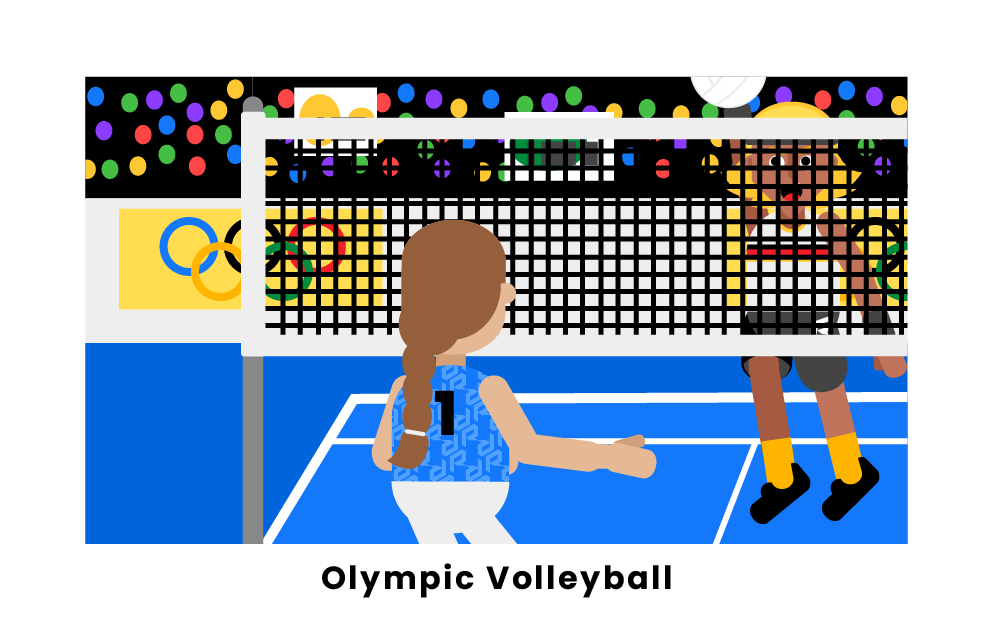 Volleyball had its Olympic debut during the 1964 Tokyo games. Brazil, the United States, and the Soviet Union are the only teams to win multiple gold medals in the men’s tournament. On the women’s side, only five different countries have won gold medals: Brazil, Cuba, China, and the Soviet Union. Beach volleyball became an official Olympic sport in 1996, and the United States has been dominant winning six golds since the tournament began. 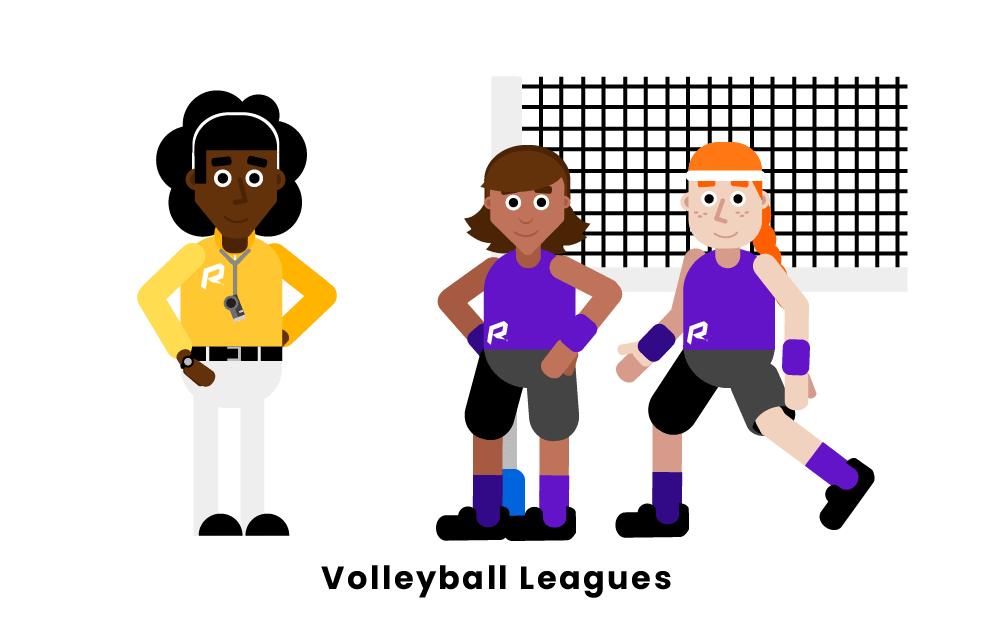 There are numerous different levels of competitive volleyball that can be played all over the world. The USA does not have an indoor professional league that compares to other countries. Most USA players will play in other countries. 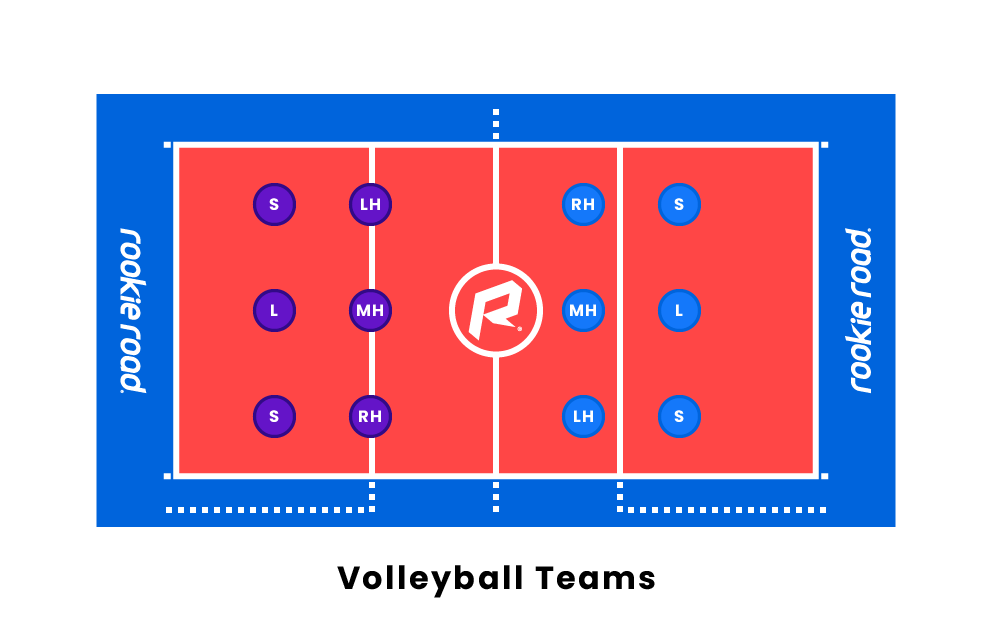 A typical volleyball team will have a total of 12 players. There will be six players on the court, and another six on the bench as substitutes. In FIVB rules, a team can have up to 14 players total. The most popular teams in volleyball are the international teams. Among the best teams include Brazil, Italy, United States, and Poland. 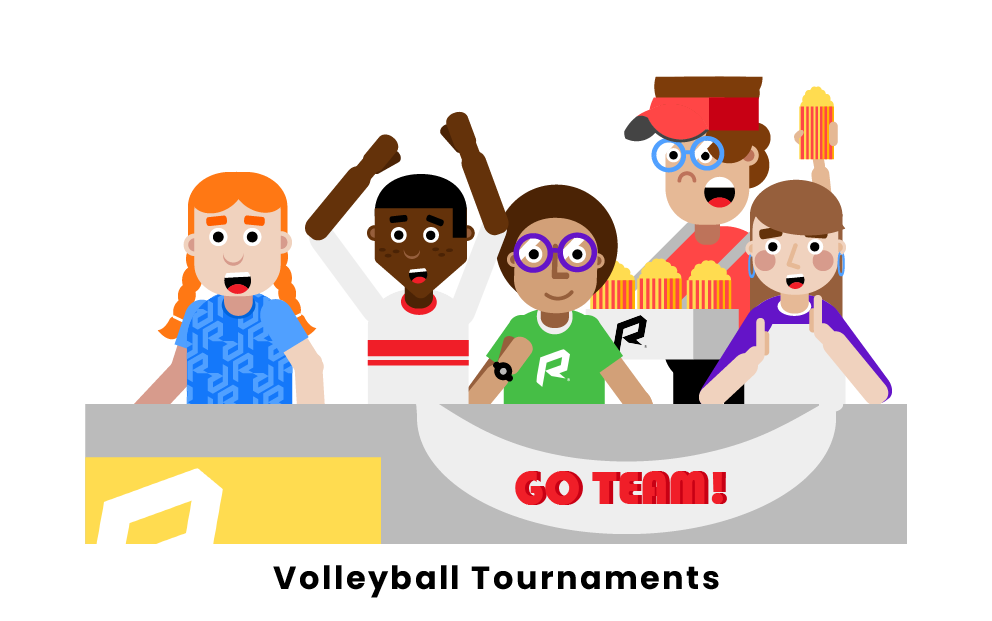 What are the basic rules of volleyball?

What are the six volleyball positions?

Why is it called volleyball?

Volleyball was originally called “Mintonette,” due to its resemblance to the game of badminton. However, it was later renamed to volleyball since the goal of the game was to volley the ball back and forth over the net.

How much does volleyball equipment cost?

A ball will cost anywhere between $20 and $50. Along with that, shorts and a jersey will cost another $40. You can find a nice pair of volleyball shoes for $115, and more affordable pairs for a price of $40.

Pages Related to What is Volleyball?