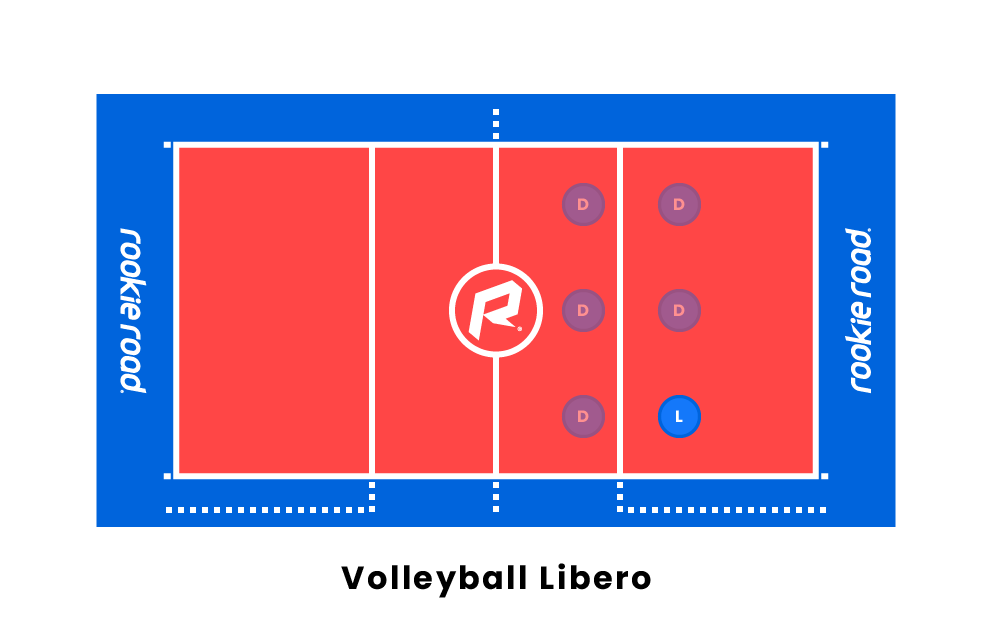 The libero is a very important defensive player that substitutes for another player in the back row (usually the middle blocker/hitter). They’re marked by their different colored jerseys and must be the designated libero for that game. The libero can exit and enter without substitution requests. They are the defensive leader and never rotate to the front row. Though libero is Italian for “free”, the libero has some limitations: they are not allowed to attack the ball from the front row above the net or block.

There are usually two on the team roster, but only one is allowed on the court at a time. The libero on the court is known as the acting libero, the other is the second libero.

Players are transitioning from offense to defense as the ball goes from side to side, so the goals of the libero shift as well.

The main goal of a libero on offense is to act as a backup setter if the initial pass is shanked. If the ball is shanked behind the attack line, the libero is allowed to set overhand like a normal setter. However, if the ball is passed in front of the attack line but the setter is unable to reach it, liberos are allowed to set but only with a platform pass. This makes it much more difficult to accurately place a ball and should only be used as a last resort.

Defense is the main purpose of the libero. They are meant to be the best passer on the team and should try to position themselves to receive as many serves and digs as possible. During a serve, the libero will try to pass the ball close to the net where the setter has the chance to set all three hitters. When the opposing team has the ball, liberos will try to position themselves towards the middle of the court or wherever the attacker is most likely to hit. As liberos are unable to block or attack, they should focus on performing high-quality digs and passes.

What Can A Libero Do?

What Can’t A Libero Do?

How Can Teams Use The Libero?

Each team has to choose a player to be the first and second libero for the rest of the game. Teams are not allowed to switch liberos during a game.

The main role of the libero is to keep the ball in play. This means diving, rolling, and doing whatever is necessary to make a save. Most of the defensive moves in volleyball will be used by the libero.

What is the role of a libero in volleyball?

The main role of liberos is to be the primary defender. Liberos cannot attack or block at the net, so they must focus on passing and serving as an emergency setter. Since liberos can technically play the entire game, they are usually the best passer and digger on the team. That being said, it is important for the libero to try and position themselves to receive a spike as best as they can

How do libero substitutions work?

Libero substitutions work differently than regular substitutions. Liberos are allowed to substitute in or out at any point and must do so from behind the attack line. Liberos typically line up across from a middle hitter. They do this so that when they rotate to the front row, they can sub out and then immediately sub back in for the middle hitter who is rotating to the back row. This cycle allows liberos to stay in the whole game and prevents a weaker player from playing the back row.

Can liberos serve in volleyball?

Liberos can in fact serve in volleyball, however they can only serve in one position of a team’s rotation. This means that, while a team’s libero may be a skilled server, they can only serve for a single player, in order to prevent an unfair advantage. However, it is worth noting that in some leagues, liberos are not allowed to serve at all.