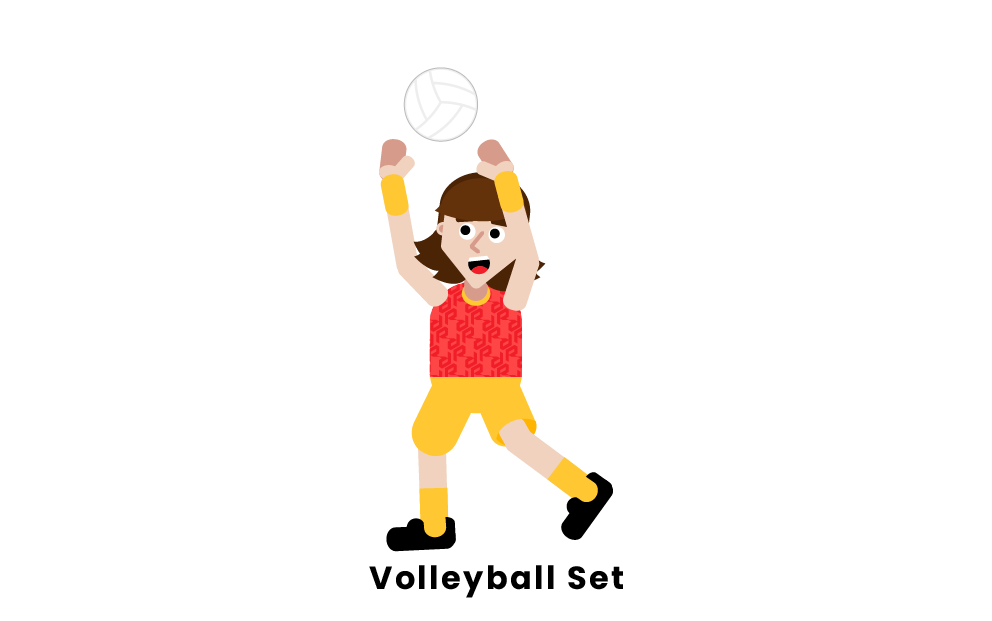 Setting is an extremely important component of volleyball. Having a good setter is imperative to any team’s attack. While setting is important, it can also be very difficult to execute properly. Because of this, it is important to know the rules of setting in volleyball.

What is Setting in Volleyball?

In volleyball, setting is one of the key steps in a rally between two teams. Specifically, setting is the step in a rally that occurs after passing, in which one member of a team receives the ball as it comes over the net and “passes” it over to a teammate, who is the setter. In order to set, the setter must use their hands to send the ball straight upwards. This is called “setting” because the action “sets up” the ball for a hit over the net, usually by a spiker, who will drive the ball over the net with a strong forward strike. There are many rules concerning the proper form of a set in volleyball. Read on to learn the position of the setter, types of sets in volleyball, how and when to set, and other vital rules of setting!

Position on the Court

The setter is the player on the court that normally gets the second touch on the ball. Their main goal is to place an accurate pass for one of the hitters to spike. Passers aim to get the ball to the setter because the setter is in charge of getting the ball to the hitters. Most often, a setter will play in the back row toward the right side, allowing them to move easily to the front right while having three available hitters in the front row. They are the player on the court who has the strongest skills in placing the ball in the right place for their hitters. Setters must be able to communicate with their players and know where specific hitters want the ball to be delivered to them. Setting is executed with a motion of the hands rather than typical passing, which utilizes the entire motion of the arms.

Types of Setting in Volleyball

There are many different types of sets in volleyball. Some of the most common types are listed in alphabetical order below:

There are many different ways for the setter to place the ball when they are setting. Typically, they use two hands to send the ball, but if they cannot get into a proper position, they can also set with a “platform,” which is the typical way players pass or bump the ball.

When setting with the hands, the setter must be sure to plant their feet on the ground steadily and spread their hands in the shape of the ball above their heads. They must come into contact with the ball with both hands at the same time, or the ball will spin, and a double can be called. Once the setter comes into contact with the ball, they must push it in their preferred direction both with their arms and with their body. For longer sets, they must use their legs and torso to push the ball. They must also follow through with their hands and the direction of their body to ensure the ball moves in the right direction.

Setters also have the opportunity to “dump” the ball if they feel they cannot get a good set to a hitter. They will pretend they are setting and then send the ball over the net instead, hoping to trick the other team and catch them off guard.

Setting occurs as the second touch on the ball when the setter is able to reach the initial pass. Players will pass the ball to the setter, and the setter then places the ball for their hitters. In most rotations, the setter will move so that they are in the front row, and another player will pass for them. If the setter passes the first ball, another player, often the libero, will step up and act as the setter.

The point of a setter is to put the ball in position for hitters to get the best hit possible. Setters often have to decide where the best place is to set the ball based on where they are on the court and on which players are hitting the best. Often, setters will set to one player over another because they are playing better or they are in an ideal place on the court to line them up to hit the ball.

One key skill for setters is communication. They must talk to their hitters so that hitters are prepared to hit, and they must be able to listen to the hitters' feedback on their sets so that they can improve. In many situations, if the setter feels they cannot get to the second ball, they can call for help so that other players might act as the setter. 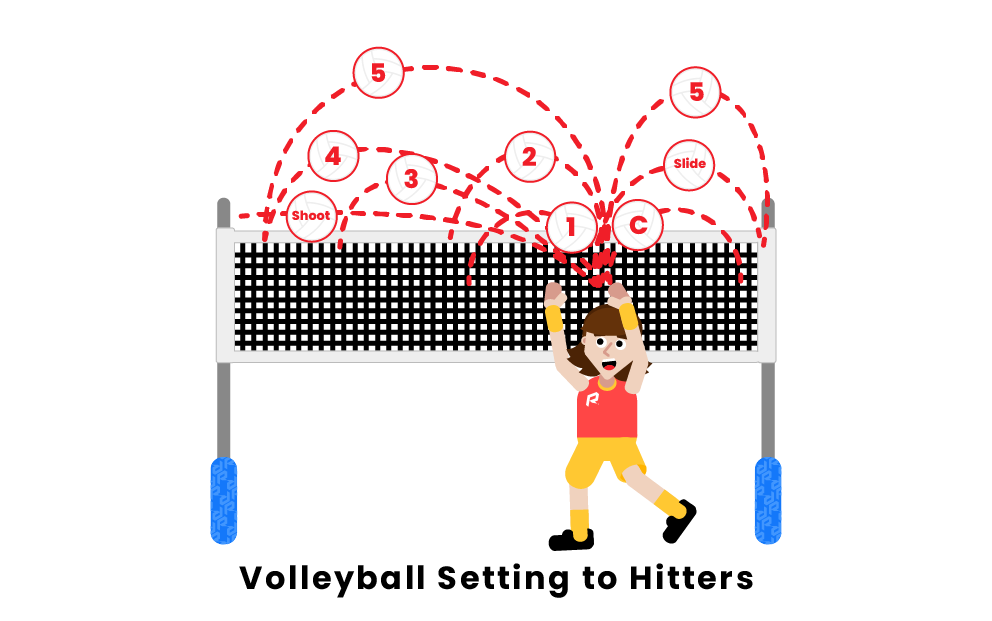 There are many places where the setter can place the ball. The three most typical sets are sets to an outside hitter, a middle hitter, or an opposite hitter. The set to the outside goes to the left side of the court, the middle goes to the middle, and the opposite goes to the right side. These players work with their setters in practice so that the setter knows how each of them hits and where they like the ball in the air.

The setter can also set a lower set to the middle, which is a quicker hit meaning that the other team may not be able to get a block up fast enough. Middles can also “slide” and move to the right or left side of the court, again to change position and confuse blockers. Setters can also set players in the back row. These players must hit from behind the 10-foot line, but these hits can be difficult to block as they do not fit into the typical front-row attacking hits.

The main rule that affects setters in volleyball is the team hits rule. Along with prohibiting four or more hits by a team during a possession, the rule forbids a single player from hitting the ball twice. If the same player hits the ball more than once, it is a “consecutive contacts” violation. Thus a setter must be careful to cleanly hit the ball with both hands at once, or only a single hand, in order to avoid breaking the team hits rule. Likewise, a setter must not set the ball to a teammate if the setter is the third player on their team to touch the ball. If the libero is acting as the setter, they are subject to libero restrictions, which prevent them from overhand setting in front of the attack line.

What is an illegal set in volleyball?

There are a few different types of illegal sets in volleyball. The most common illegal set is a double touch. This occurs when one hand touches the ball before the other, causing the ball to spin. Another type of illegal set is a carry or lift, which is when the setter makes contact with the ball for too long during their pass. It is also important to note that liberos are not allowed to overhand set the ball when they are standing in front of the attack line.

Liberos are allowed to set under certain circumstances. They can bump-set from anywhere on the court, which is similar to a bump pass. While this is allowed, it is not advised as it is much more difficult to accurately set with a bump. On the other hand, liberos are allowed to overhand set, but only from behind the attack line. Because of this, liberos commonly act as a setter on stray passes that the setter cannot reach.

Can you jump set in volleyball?

Yes, you can jump set in volleyball. In fact, in college and professional divisions, most setters jump set as their regular motion. If this skill is mastered, it can allow the setter to deliver the ball much quicker and at a better angle for hitters. It also allows the setter to better disguise their dump-offs by starting the ball’s trajectory at a higher point.

In volleyball, it is very important for setters to practice proper contact with the ball when setting. In order to contact the ball correctly, setters must stand beneath the ball so that it is falling towards their eyes, with their hands raised beneath it. Then, they must place their hands together with their fingertips touching, forming a triangle for the ball to touch. As the ball falls, the setter opens their hands and lets the ball come to rest on their fingertips, pushing it upwards immediately. In an ideal set, the ball will leave the setter’s hands straight up and not be spinning. Setters must be careful of not touching the ball twice, or of letting it touch their fingers long enough for the set to be called a catch.