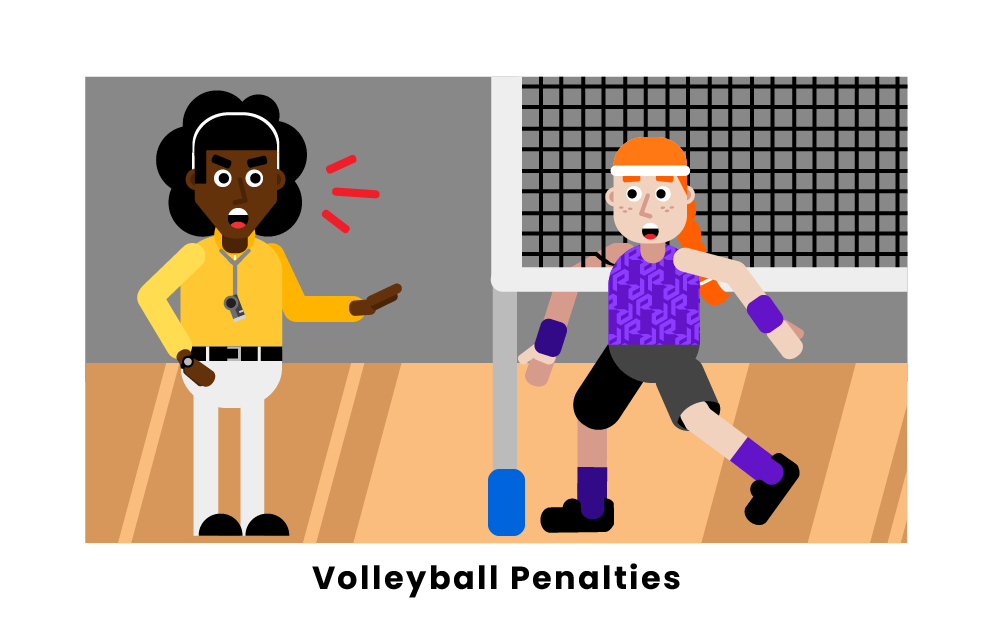 A penalty, or violation, is called by a referee on a player who breaks a rule during the volleyball game. Violations result in a side out, which means possession of the ball and a point for the other team. 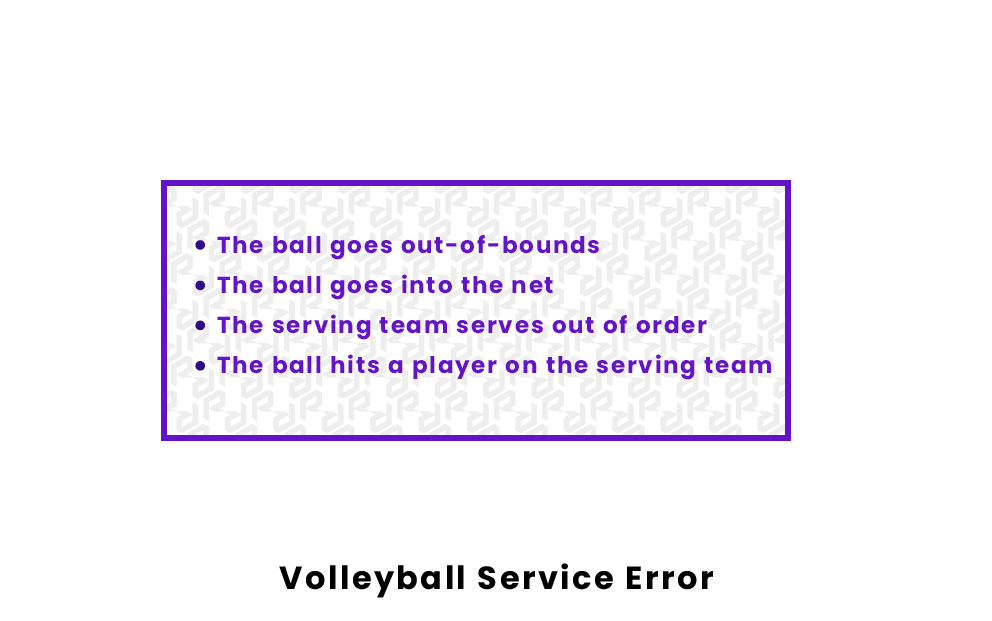 There are a few things that can go wrong during a serve. A referee will call a service error if:

If any of these penalties occur, a serving error will be given to the player who commits the violation. The team who committed the penalty will lose the serve and the other team will gain a point if using rally scoring. 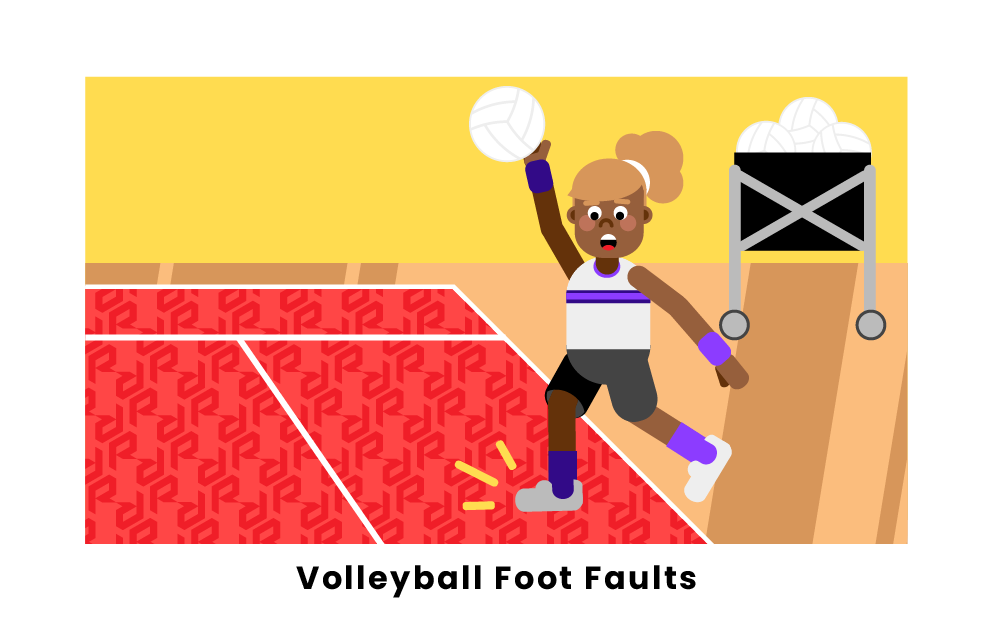 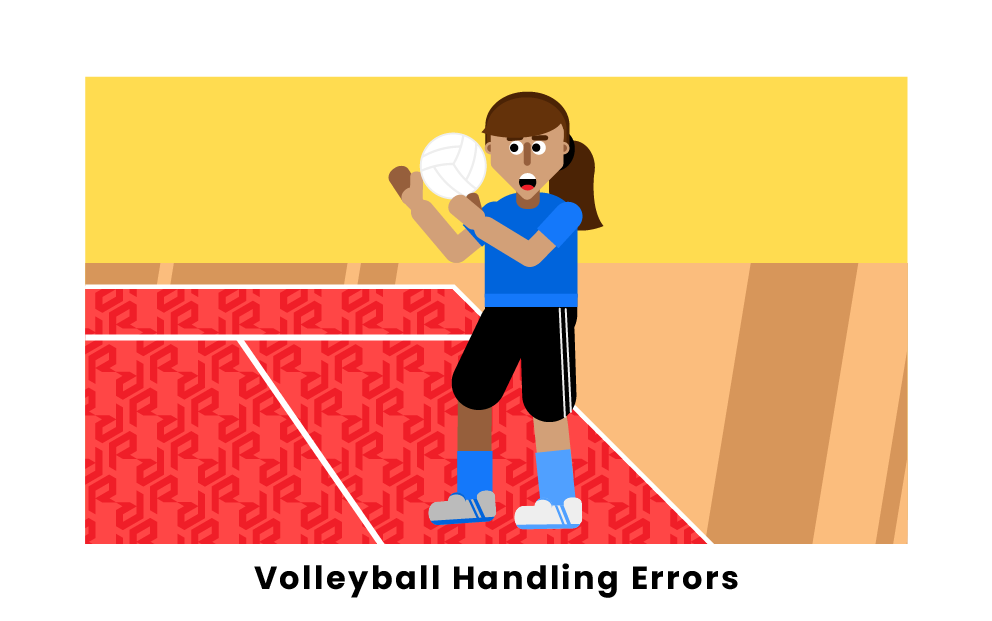 There are several ways to commit ball handling errors in volleyball. If a player contacts the ball illegally, the up or down referee will call for a violation and that player’s team will lose that point.

Touching the ball two times in a row, or committing a double hit, is a common ball handling error. It will most often be called when a player tries to set a ball with their hands but mis-hits it. This will cause the ball to spin, making the double-touch easy to detect.

Another form of a ball handling error is called a lift. This is when a player has elongated contact with the ball and essentially lifts it instead of hitting it upward. This penalty will also be called if a player attempts to underhand pass the ball with an open palm.

Similar to lifting, players can be called for carrying or throwing the ball. Again, this is where the player comes into contact with the ball and holds on to it, directing it instead of hitting it.

The last ball handling error is if there are more than three touches on the ball before it goes over the net. When the fourth player touches the ball, the referee will call a violation and that team will lose the point. 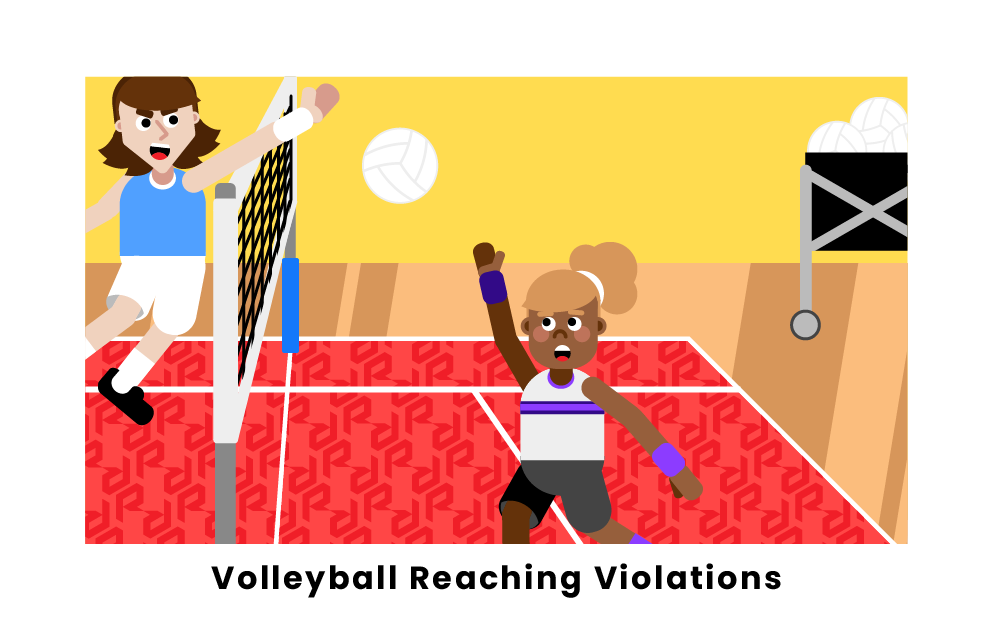 Reaching violations can happen both during blocking and hitting. Blocking players are not allowed to reach across the plane of the net to touch the ball if the opposite team has not touched the ball three times yet, and there is a player present who can get to the ball. Similarly, if there is an overpass, hitters cannot reach across the net to hit the ball if the ball has not yet crossed to their side of the net. Instead, they must wait for the ball to come to their side of the court before trying to hit it back over. If blocking an opponent’s third hit, a player is allowed to reach over the net once the opposing player touches the ball. 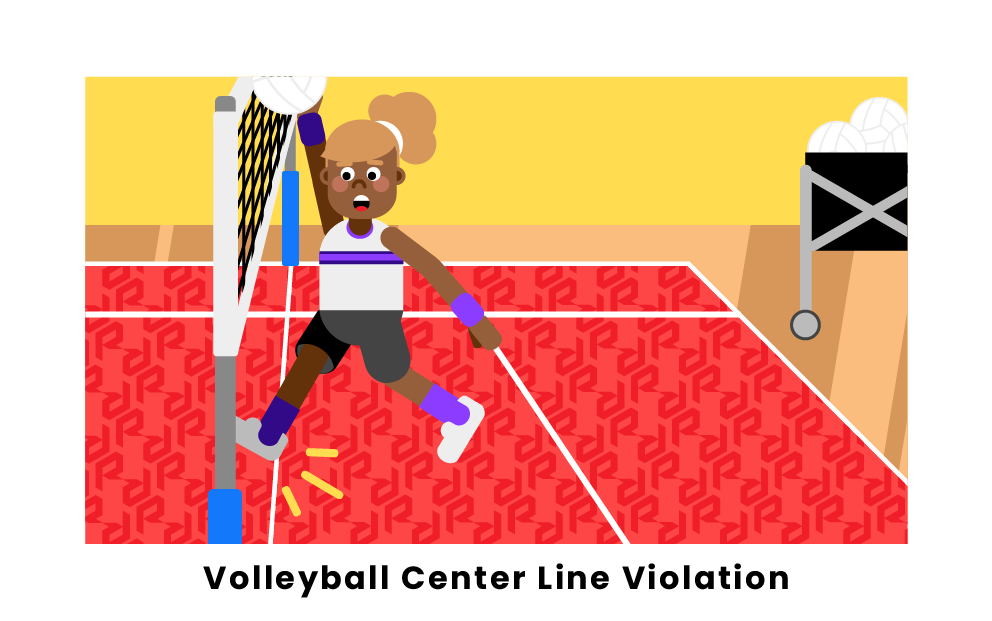 There is a centerline underneath the net that divides the two halves of the court. Players cannot have any part of their body cross this line, as if they do it will result in their team losing a point and they could also possibly cause an injury to the other team. In the case of a hand or foot, the entire hand or foot must cross the line for this violation to be called. This rule exists to ensure that players do not go under the net and get in the way of a player who is landing from a hit or a block.

One exception to this rule is if a player is running to save a ball. If the ball is overpassed and is going out of bounds, a player can go under the net as long as they stay out of the court bounds. They can return the ball to their side, outside of the antenna, for a third player to send the ball safely to the opponent’s side. 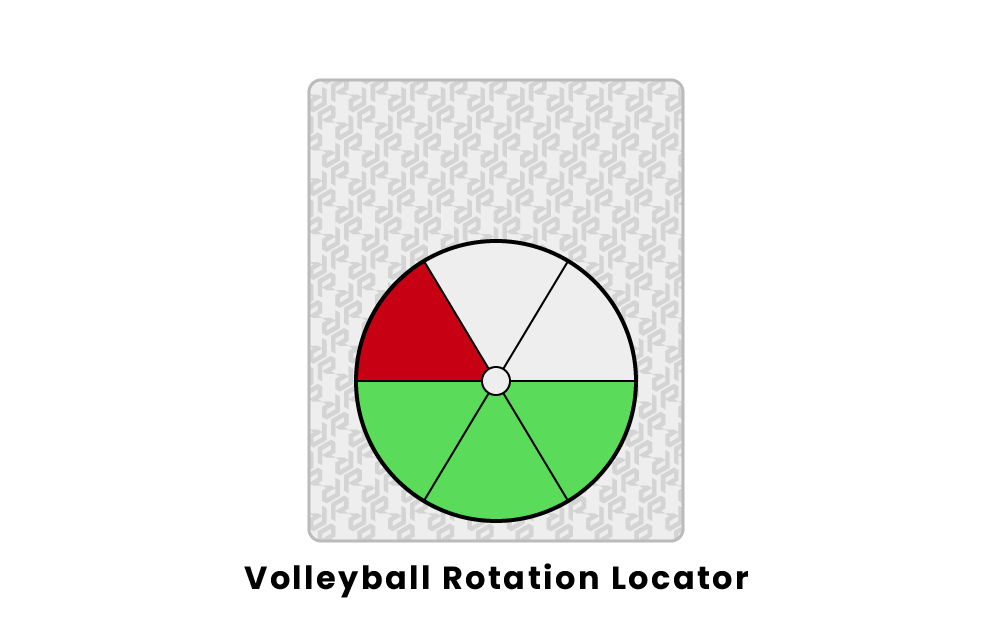 Before the beginning of a set, both team’s coaches must show the referees their rotations. The players on the court must stay in the order listed on that rotation throughout the whole set. If the players end up in different positions and serve out of order, a rotation violation is called and that team will lose the point and the serve.

There is a referee on the sideline who keeps track of substitutions and rotations to make sure that players do not get out of order. This rule ensures that each player on the court serves, rather than one player serving more often. It also ensures that teams cannot change their lineups in the middle of a game to change matchups of players at the net. However, players can be substituted in and out, but the player being substituted in must fulfill that player’s spot in the rotation. 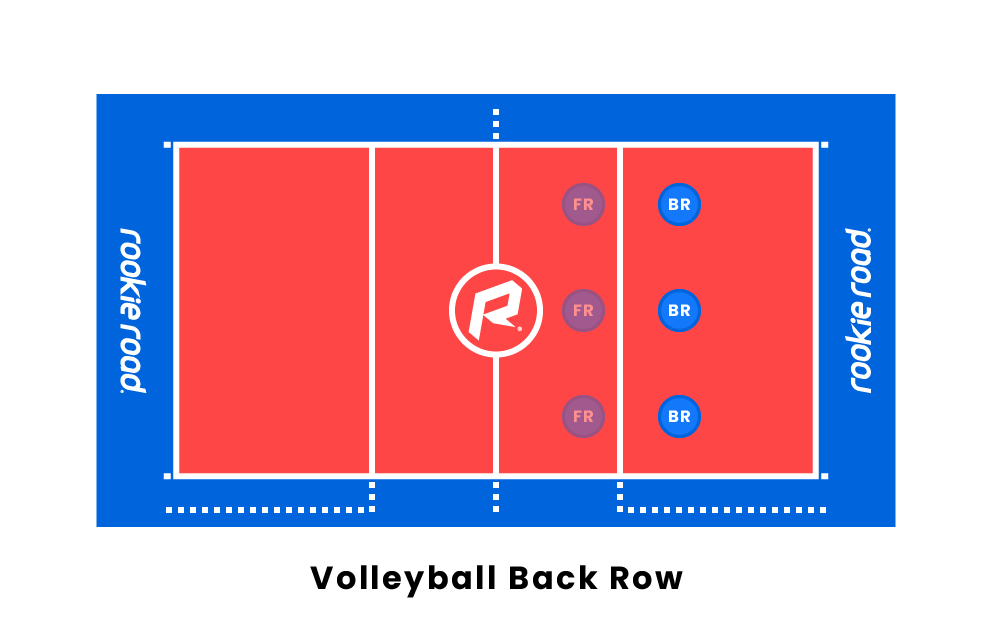 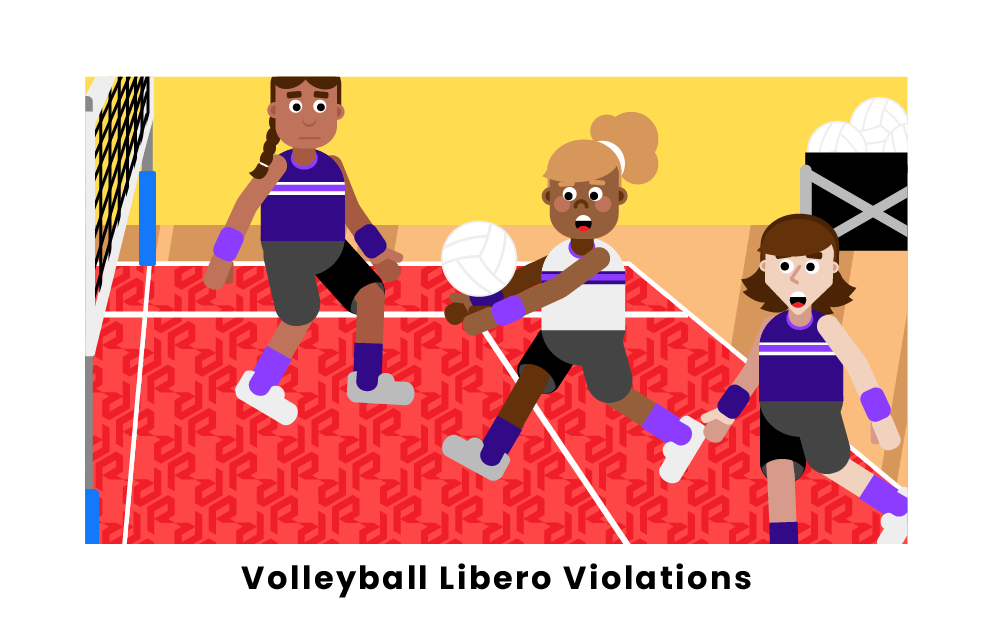 Liberos are a unique position in volleyball, but have their own set of rules and violations. Libero substitutions do not count as a regular substitution, but they can only play in the back row. Because of this, they must adhere to all of the back row attacking and blocking rules mentioned above. One rule that liberos must follow that regular back row players do not have to is in regard to setting. Liberos are not allowed to overhand set the ball while standing in front of the ten-foot line. If this occurs, the player who is being set is not allowed to attack the ball above the net, otherwise a penalty will be called. Liberos are allowed to overhand set from behind the ten-foot line or bump-set from anywhere on the court.

What is a lift in volleyball?

A lift, also called a carry, is a type of illegal hit in volleyball. A lift can occur in a few different ways. The first way a lift can occur is if a player attempts to underhand or bump pass the ball with an open fist. Underhand passing the ball with an open palm is illegal even if the contact is brief. The other way a lift can be called is if a player makes contact with the ball for an elongated period. As opposed to the ball bouncing off of a player, during a pass, attack, or tip, any prolonged contact will be called as a penalty.

Can a player touch the ball twice in volleyball?

In volleyball, it is illegal for a player to touch the ball twice in a row. There is one exception to this rule, however. If a player blocks the opposing team’s attack, ir does not count as a touch. Therefore, if a player blocks a ball, they are allowed to contact it again before a teammate touches the ball. Double hits are also commonly called on setters when both of their hands do not make contact with the ball at the same time.

What happens when a penalty is called in volleyball?