What Are The Best Seats At A Volleyball Game? 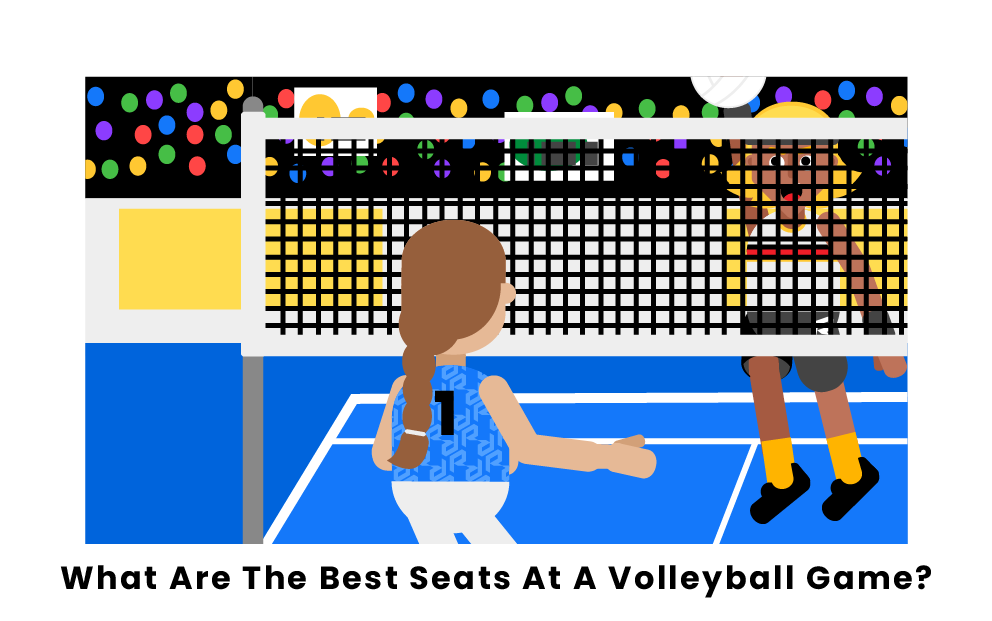 Like any other fast-paced sport, the vantage point from which you view a volleyball game changes how easily you track the movement on the court, and thus how much you enjoy the experience of the game itself. Listed below are the best (and worst) seats to sit in at a volleyball game.

The most popular spot from which to watch a volleyball game is near the middle of the court and as close to the floor as possible. As with sports like basketball, this is because midcourt is the best chance to view both sides of the action regardless of which team you are supporting, and the view is obviously better the closer you are to the action. If you are perfectly midcourt, that means you are aligned with the net that divides a volleyball court and are equidistant from the attack lines of each side. If you are closest to the net and the side of the court as possible, you have the best chance of seeing players from either team approach the net offensively or defend their side against the efforts of the other team. As a fan-favorite spot, seats in this area will often be the most difficult to get, and will be some of the most expensive, unless seat pricing is general admission.

Behind the End Line

Though midcourt and courtside seats are the favorite spots for fans wishing to simply enjoy the game, the best analytical vantage point of a volleyball game is behind the end lines. The end line refers to the service lines at the edge of the court that create the limits of where each team can move during the match. This section of seating is also the favorite viewing spot of both coaches and die-hard fans, because it gives the best angle from which to analyze positioning of players and see jersey numbers. From either end line, you can see the numbers of the players on the opposing team as they approach, as well as the numbers of your home team’s players, all while keeping a full view of the court. As with hockey, this view is less for viewing the action shots of the game and more for observing the overall mechanics. In that same vein, sitting at either end line is the best spot from which to judge the fairness of referee calls. Like midcourt seats, this section of seats sells out pretty fast, and can be some of the most expensive unless the stadium has general-admission seating.

Any highly competitive sport, especially at the collegiate, national, and international levels, will often have the option of luxury seating, and volleyball is no different in that respect. While courtside seating at either the midcourt or near the end lines are sought-after for their view of the game, reserved seating and VIP areas are mainly about comfort and luxury. Though VIP seating can certainly be special courtside seats, perhaps even permanent ones as part of a VIP season package, certain volleyball arenas and stadiums come with the option of rentable suites. As with other VIP sports experiences, these suites are closed-off areas with lush seating, and some can even come with their own refreshments or other hospitality services. Due to the high level of service and luxury that comes with VIP seating, tickets and reservations for access are by far the highest amounts you can expect to pay to view a volleyball game, some even requiring a sizable donation to the school before purchasing any actual tickets.

In direct opposition to the previously-mentioned seating areas, the worst place to be seated at a volleyball game is far away from the court in general, far from the midcourt, and far from luxurious. Because the action of volleyball does not cover an enormous area like certain sports, such as soccer or hockey, there is no advantage to a view far from above. Due to this fact, after a few rows, the rule becomes: the farther you are from the court, the worse your view will be. Some of the largest volleyball arenas, especially those that host national and international games, can have tens of thousands of fans attend each game, and that means there can be enormous distances between a fan and the players on the court.

While some people may be happy to simply be in attendance at any range, fans looking for specific experiences in terms of vantage point or luxury should save up and get their tickets early so that everyone can have the optimum experience while enjoying a volleyball game.

Pages Related to What Are The Best Seats At A Volleyball Game?