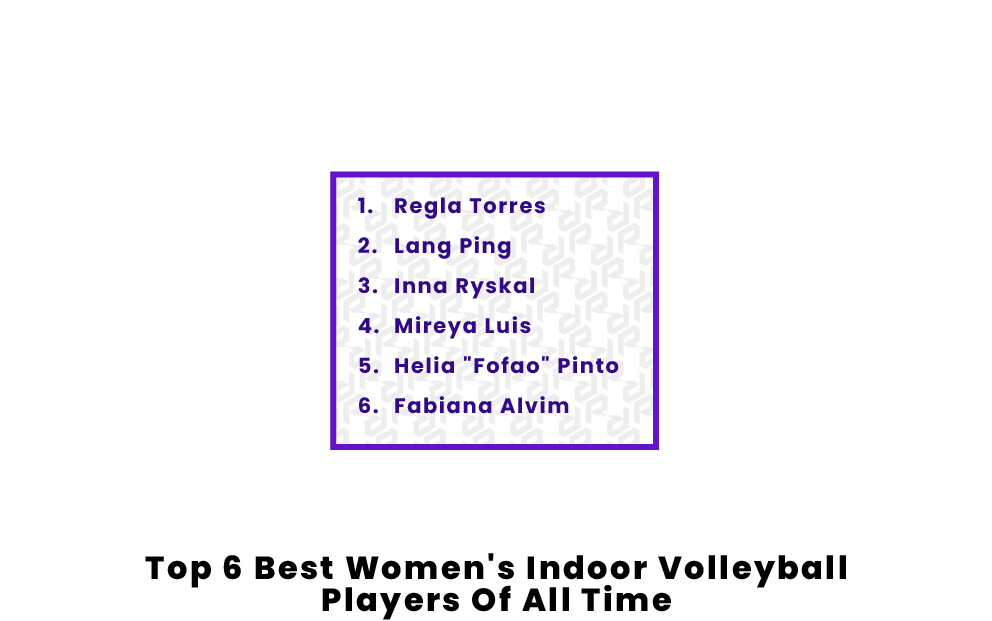 Who are the top 6 best women's indoor volleyball players of all time?

When looking for the best female indoor volleyball players of all time, one name stands out as the greatest of the greats; that name is Regla Torres. In her stellar career, Torres was the best player of one of the best teams in history, the Cuban National Team that won three Olympic Gold Medals and two World Championships in a row. Justified by her achievements in the sport, Regla was elected by FIVB the greatest female volleyball player of the 20th century, the ultimate honor that makes her the best of all time. Her volleyball career started early, and at the age of 16 she was already playing for Cuba's senior team. Her athletic and agile playing clearly matured fast, as at just 17 she won her first of three Olympic gold medals. Two years later, at 19, Cuba won the FIVB World Championships, and Torres was elected as the tournament's MVP. Cuba continued to dominate, collecting gold medals, and Regla continued to add individual awards in addition to those medals.

Regla Torres' talent and overall volleyball completeness can be seen through those awards. She has won individual awards in many disciplines, such as serving, receiving, spiking, and blocking. By the end of her career, Regla Torres had conquered 14 international medals, of which an impressive 11 were gold. Torres' career was filled with both individual and team success, a balance that some of the great athletes sometimes don't find. Nonetheless, she was the greatest among the greats, and Regla Torres' Awards and medals speak for themselves.

Lang Ping's volleyball nickname tells a lot about her career and style of play. The "Iron Hammer" was a vicious player, who besides having power in her play, was also smart and athletic, a combination that turned her into one of the greatest volleyball players of all time. A true leader on the court, Ping was captain of the Chinese National team that won the country's first Olympic gold medal in volleyball; she was elected by the FIVB as the Olympics' MVP. Her leadership traits would also be seen later in her career, as a coach. In 1985, Lang Ping and China won the FIVB World Cup and she was elected the tournamet's MVP. Immediately after, Ping retired to start a coaching career. She was only 25, the beginning of her prime. Lang Ping would still come back a few years later to win a silver medal at the 1990 World Championships, held in China.

Lang Ping's impact on volleyball could be much bigger if she hadn't retired so early, given her talent and volleyball mind. Retiring as a Chinese legend and beloved in her own country, Lang Ping had been a World and Olympic Champion, and a two time World Cup winner. Unquestionably she was a successful player, due to her unique talent. Lang Ping was as successful as a coach, if not more. In 1995 she took charge of China's Women's Volleyball team, winning one World Cup bronze, Olympic Silver, and World Championships silver in her first three years, while being named FIVB's coach of the year. Later on, she would lead the Chinese team to the Olympic gold in 2016, and the women's American team to a silver in 2008. Although her impact as a player may have been cut short due to an early retirement, Lang Ping's playing made her one of the best players in history. In addition to that, her impact on volleyball only grew, as she became an incredible coach.

Mentioned above, Lang Ping and Regla Torres were the center pieces of dominating teams in the 1980s and 1990s respectively. But before them, there was Inna Ryskal, the best player of the most dominant women's volleyball team during the 1970s, the USSR. Inna started playing for the senior national team in 1961, at 16 years old. It didn't take long for Inna Ryskal to find success on the court, as in 1962, she was part of the USSR team that finished second in the FIVB's World Championships. That would be Ryskal's first of three medals in World Championships, throughout her career she would win another silver, and one gold, in 1974 and 1970 respectively. Those World Championships are only a part of Inna's and the USSR's glories during the 1960s and 1970s. The team would take the court not to beat, but rather to dominate opponents in a playing style based purely on powerful attacking. The team's strategy was highly reliant on Inna herself, who was a powerful attacker, and thus she became the team's central piece. Inna's power would be showcased to the world at the 1964 Olympics, in Tokyo.

Due to her ruthless, strong attacking, she became known as the "Caspian Thunderstorm," yet another proof of her strength. In Japan she won her first Olympic medal, a silver after losing to the host team, Japan. However, four years later the USSR would have their revenge, and defeat Japan in the final, winning the gold, Inna's first. She would go on to repeat her results in the next two editions; with two gold and two silver medals in the Olympics, more than any other female volleyball player ever. Although she has unquestionably won enough titles, Inna Ryskal is one of the best players ever not only because of that, but also because of her unmatched attacking power.

Mireya Luis can easily be called a volleyball prodigy. By the age of 15, she was already a starter on the Cuban Women's Volleyball National Team. That was no ordinary team, it was one of the greatest teams in history, and Mireya was fundamental in their success. Not unexpectedly, Mireya, along with some of her teammates, are the only female volleyball players that have won three Olympic gold medals. The Cuban team was dominant all throughout the 1990s, and that doesn't only include the Olympics. Mireya Luis also won two FIVB World Championships, and finished second once. She also accumulated titles in Grand Prix's and World Cups, and Panamerican Games. When winning all those tournaments, Mireya was a brighter star on a team full of bright stars. She has collected individual awards such MVPs, Best Scorer awards, and Best Spiker awards.

Attacking and spiking were definitely Mireya's strengths. At only 5 foot 10, many wouldn't even think that Mireya could be a volleyball player, much less one of the best in history. However, she had a once-in-a-generation jump, breaking vertical jump records and impressing those who didn't know her game. With athleticism and scoring abilities, the Cuban team relied heavily on Mireya Luis for scoring, and she corresponded accordingly. Outside of the court, the volleyball player was also an MVP, always serving as a role model and as an idol in her country.

Helia Souza, nicknamed Fofao, had one of the most brilliant careers in volleyball history. Beloved throughout the world, she made her nickname, her number 7 jersey, and her incredible story well-known by being one of the best players ever. Fofao is a player that has found success at every stage of her career. She won titles in all countries where she played, for the national team, keeping the consistency from beginning to end. To set an example, after retiring from the Brazilian National Team, Fofao kept playing at the club level in Brazil. In 2015, at 45 years old, she won her third title of the Brazilian league, and was crowned the finals MVP. She has won more than 20 individual awards, mainly MVPs and Best Setter Awards. Those include twice Best Setter in the Olympics and many more in Grand Prix's.

Talking about volleyball Grand Prix, Fofao has seen plenty of them. She has 10 Grand Prix Medals and 7 golds, a competition record. However, there is one gold medal missing in Fofao's collection; she never won the FIVB World Championships, finishing with the silver twice. Nonetheless, that doesn't make her career any less brilliant, and Fofao anything but great. Her abilities as a setter, her medals, and her consistent success during her long-lasting career all speak for themselves, and Fofao is a must-have in any volleyball greatests discussion.

If Brazilians can call themselves two-time Women's Volleyball Olympic Champions, it is much because of Fabiana Alvim, or simply Fabi. Fabi was not only an exceptional player, but also a remarkable leader to whom players looked up to. Wildly successful throughout her career, Fabiana is widely regarded as the best libero of all time. Naturally, she had unmatching defensive talents, which propelled her to success and were alway an important part of her team's success, regardless of where she was. As a defensive specialist, her greatness can be seen through her individual awards. Although she was rarely elected a tournament's MVP, she was constantly being named Best Libero or Best Receiver, and without her playing, her teams probably wouldn't have a chance at the title. But most of the time, they did, and therefore Fabi is a volleyball multi-champ.

In addition to her Olympic Golds, she has 5 Grand Prix Titles, three silvers, and two World Championships silver medals. At the club level, Fabi Alvim is one of the Brazilian League's most remarkable and famous players. Staying her whole career in the country, she is beloved by volleyball fans all around Brazil, and gets sympathy from all fan bases. Being considered the greatest of all time in something is not easy. Yet Fabi Alvim is constantly being called the best libero ever. No one can erase her story in the sport, and thus she is one of volleyball's greatest players ever.