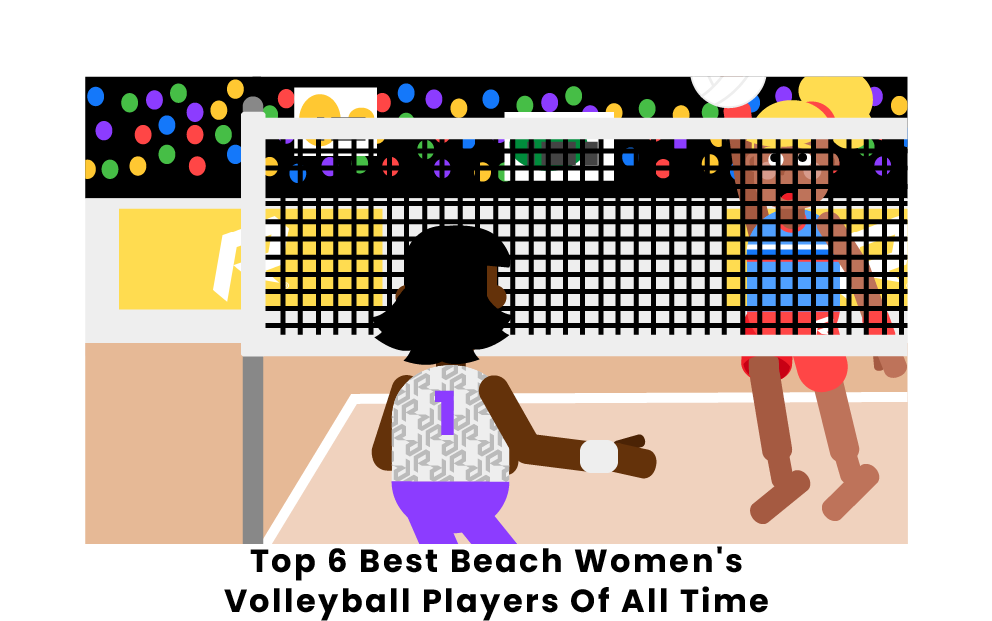 Beach volleyball is a highly competitive sport that has been played for over a hundred years. It takes place on a sand court with a net in the middle to divide both sides. Each team consists of two players who must work together to score points by landing the ball within the boundaries of their opponent’s side of the court. Beach volleyball is played both recreationally and professionally, and has been an official Olympic sport since 1996. Below are some of the world’s best women’s beach volleyball players to ever play the sport.

Who are the best beach volleyball players of all time?

Kerri Walsh Jennings has been an absolutely dominant figure on volleyball courts since her college years, where she was a four-time All-American and won two National Championships with the Stanford University indoor volleyball team.

Walsh Jennings partnered up with Misty May-Treanor in 2001, and the pair finished ranked fifth worldwide after their first ever beach circuit together. The duo’s success was far from over, though. A year later they seized the number one ranking and by 2003 they were setting the world record for wins in a row at 90.

Walsh Jennings and May-Treanor continued their unprecedented success throughout the 2000s, breaking their own record for consecutive wins in 112 matches.

It would be hard to find a more accomplished player than Walsh Jennings. Over her 16-plus year career, she has earned over 70 international medals, including a three-peat of gold medals at the World Championships in 2003, 2005, and 2007. She also three-peated in the Summer Olympics, winning gold in 2004, 2008, and 2012 before earning bronze at the 2016 Olympics in Brazil.

Walsh Jennings’s 6-foot, 3-inch frame allows her to get up above the net and block shots, but she can also be devastatingly good on offense, striking the ball past opponents for points.

Walsh Jennings holds the records for most career tournament victories (with 135) and most career winnings (over $2.6 million).

Making up the other half of the most legendary duo in the history of women’s beach volleyball, Misty May-Treanor teamed up with Kerri Walsh Jennings in 2001. The pair went on to win countless competitions, both domestic and international.

This included winning streaks of 90 games in a row and 112 games in a row, both set world records at the time, and the streak of 112 still stands today.

May-Treanor earned four consecutive AVP Most Valuable Player honors from 2005-2008. She also earned the FIVB’s Most Outstanding Player award in 2005 and 2008. May-Treanor’s other AVP awards include three-time Best Defensive Player (2006-2008) and five-time Best Offensive Player (2004-2008). Additional FIVB accolades include two-time Best Defender, three-time Best Attacker, 2005 Best Setter, and Sportsperson in 2007 and 2008. May-Treanor was inducted into the Volleyball Hall of Fame in 2016.

At 5-feet 9-inches, May-Treanor had to rely on a smaller frame to contribute. She usually played as the defender while Walsh Jennings took on the block position up front. The chemistry between these two was unmatched, and together they are frequently referred to as the greatest duo to ever play beach volleyball.

Jackie Silva was much more than a dominant force on the sand, she helped cultivate beach volleyball when it was still very much a developing sport.

Like most beach volleyball players, Silva began her volleyball career playing on indoor teams. After being selected to the Brazilian national team at age 14, Silva helped bring Brazil to their first ever Olympics in Moscow 1980 and four years later in Los Angeles 1984.

In 1987, Silva decided to move to Italy to pursue a career in beach volleyball. She then relocated again to the United States a year later. Silva joined forces with American Linda Chisolm before partnering with Sandra Pires in 1993. Silva and Pires became longtime teammates, winning an Olympic gold medal (in Atlanta 1996) and the first ever women’s beach volleyball world championships (in Los Angeles 1997) together.

Jackie Silva was known for being a fierce player on the court and in the sand. She was extremely competitive, and her temper even got her cut from the Brazilian national team three different times. This fire was part of the reason she was so successful on the court, though.

Silva’s ambition continues to shine after retiring in 2004. In 2016 she was awarded by the Olympians for Life project for her work with impoverished communities, and she continues to be a steward for the sport both in her home nation and abroad.

Natalie Cook makes this list as the best Australian beach volleyball player of all time, and probably the best outside of the Americas. Having competed in every Olympiad from the inaugural beach volleyball competition in 1996 to the 2012 London Olympics, it would be hard to find a more experienced player than Cook.

Cook began her volleyball career in 1993. Over her 20-year professional career, she played in a record 165 international FIVB events.

The highlight of Natalie Cook’s extensive career was the 2000 Summer Olympics. Hosted by their home nation of Australia, it was vital for Cook and longtime partner Kerri Pottharst to take home the gold medals. They did so in stunning fashion: After comfortably winning their way to the final, Cook and Pottharst faced two more Brazilians, Adriana Behr and Shelda Bede. A thrilling final match saw the Aussies defeat the Brazilians in two sets.

After the gold medal victory, Cook and Pottharst were given Medals of the Order of Australia, which are given for highest recognition of outstanding achievement of service.

Cook’s other significant international achievements include bronze medals at the 1996 Atlanta Olympics and the 2003 World Championships in Rio de Janeiro.

Adriana Behar was born in Rio de Janeiro, Brazil in 1969. At age 13 she started playing volleyball and in 1992 she began playing beach volleyball. In 1995, Behar teamed up with Shelda Bede. This pairing proved to be one of the best in the history of the sport.

In the history of the FIVB World Tour, no duo has won more gold medals or prize money than Behar and Bede. The two were FIVB World Champions in 1999 and 2001, earning bronze medals in 1997 and silver in 2003. However, they never took home Olympic gold, falling just short in both 2000 and 2004.

The 2000 silver medals were a product of a loss to Australians Natalie Cook and Kerri Pottharst in Australia, while in 2004 they avenged their loss to the Aussies but ultimately fell to Kerri Walsh Jennings and Misty May-Treanor in the final. Behar and Bede did manage to become the first pair to win multiple beach volleyball medals at the Olympics, though, and took home gold in the 1999 Pan American games.

Holly McPeak rounds out this list over more accomplished players because of her height. At 5 feet 7 inches, McPeak is one of the shorter players in beach volleyball history. Despite her small stature, McPeak is a huge force to be reckoned with between the lines.

While McPeak only has two major international medals to her name (bronze at the 2004 Summer Olympics and silver in the 1997 World Championships), her domination at the lower levels is quite astonishing. She was a three-time Olympian, and had more major beach volleyball competitions been introduced sooner, she would have likely won some of them.

McPeak won the NCAA women’s indoor volleyball championship with the UCLA Bruins in 1990, but had already shifted to beach volleyball by the time she graduated. During her professional career, McPeak earned five different MVP awards and an AVP Outstanding Achievement Award in 2004.

Laura Ludwig is yet another dominant women’s volleyball player who didn’t quite make our list of the top six best all time. Ludwig has a long history in international competition, representing her home country of Germany. In her only Olympic beach volleyball appearance thus far, in 2016, she and her partner Kira Walkenhorst secured Germany its first ever Olympic gold medal in women’s beach volleyball. Further, she has also secured four gold finishes in the European Women’s Volleyball Championships. With such a strong track record of success in international competition, and her consequential role in the history of German beach volleyball, Laura Ludwig has certainly cemented herself as an all time great of the sport. In fact, at the age of 35, she is in a great position to build upon her already impressive beach volleyball resume.

Which country has the most Olympic gold medals in women’s beach volleyball?

The United States currently has the most Olympic gold medals in women’s beach volleyball with a total of four. The first three of these medals came consecutively in 2004, 2008, and 2012 due to the excellence of Misty May-Treanor and Kerri Walsh Jennings as a duo. In 2020, the USA reached the top of the podium once again when Alix Klineman and April Ross brought home the gold. The country with the second most Olympic gold medals in women’s volleyball is Brazil, who currently holds three.

Which women’s beach volleyball player has the most career tournament victories?

The winningest women’s beach volleyball player of all time is Kerri Walsh Jennings. In her immaculate beach volleyball career, Jennings amassed a grand total of 135 victories. The most remarkable part of this astonishing statistic is that Jennings is actually still an active member of the sport, meaning she will likely add to this win total before she closes out her career. Along with this plethora of career tournament victories, Kerri Walsh Jennings also has three Olympic gold medals representing the USA in the 2004, 2008, and 2012 Olympics. These Olympic accolades were accomplished alongside her long time partner and fellow all time great, Misty May-Treanor.

Who is the greatest women’s beach volleyball duo in the history of the sport?

The greatest women’s beach volleyball duo is undoubtedly Kerri Walsh Jennings and Misty-May Treanor. The pair has won countless beach volleyball matches, and hold the record of an astounding 112 match win streak. To add to the impressive nature of this feat, this record replaced their own former record of 89 consecutive match wins. Further, the pair also secured three Olympic gold medals. These instances of Olympic dominance occurred in the 2004, 2008, and 2012 Summer Olympics. This duo is one of the most dominant in the history of sports, with more than enough success and accolades to back it up.