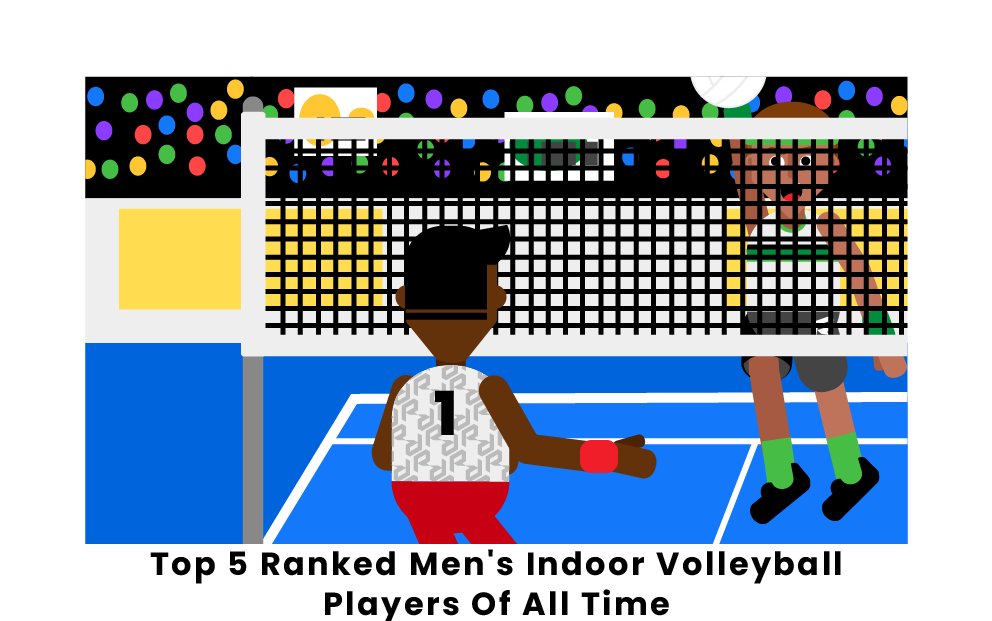 Who are the top 5 men's indoor volleyball players of all time?

Karch Kiraly is probably the most talented and overall best volleyball player ever. Not only was he widely successful on the court, but also he transitioned into beach volleyball and was dominant, earning himself some praise also as one of the best beach volleyball players ever. But here, let's focus on Kiraly's glories indoors. Kiraly was successful at every point at his volleyball career, from his teenage years playing high school volleyball all the way to his coaching career, after retirement. Kiraly was a fierce competitor, with a desire to win above all else. The combination of his mindset with the talent of a once-in-a-lifetime player are why he is considered to be the best volleyball player in history. Kiraly established himself as a winner early in his career, only losing 5 games in four years as a student-athlete at UCLA. While taking his team to three national titles, Kiraly also earned All-American honors all his four years.

With such a successful college career, it was unquestionable that Kiraly would become a great volleyball player. Only one year after graduating college Kiraly was part of the team that would end up winning the Olympic Gold in the 1984 Games, held in Los Angeles. Four years later, he would repeat the result, and be back-to-back Olympic champion, being named the tournament's best player by the FIVB. After an immensely successful career at the international indoor and beach volleyball levels, Karch Kiraly became coach Kiraly, teaching new athletes about the ways of volleyball. As a coach of the United States Women's volleyball team, Kiraly won one World Championship and one bronze medal in the 2016 Olympics, extending his legacy even more. Kiraly's accomplishments, talent, style, and history in volleyball are what make him the best volleyball player in history. It will be hard to ever be anyone in volleyball like Karch Kiraly.

Gilberto Godoy Filho, known globally simply as Giba, is one of the greatest indoor male volleyball players ever. Looking back at the history of volleyball, it is hard to find a player that has won more than Giba, especially one that has won being so important to his team as Giba has been. Plain and simple, he has won every single major volleyball title a player can win. Besides being widely celebrated in Brazil, he has also gained international fame for his accomplishments in volleyball. The three-time World Champion was a leader on the court, and alongside some extremely talented teammates Giba was crucial in maintaining Brazil's legacy as a volleyball powerhouse.

Never being the tallest player on the court, Giba made up with intelligence, leadership, energy, and physicality. Those characteristics made him into one of the best volleyball players in history, and helped him inspire his teammates and his country. There is no better word to describe Giba, if not "a winner." To understand why he was so important in the history of volleyball, and why he is so high in the "Top 5 Men's Indoor Volleyball Players" list, remember that he has won: 3 Olympic Medals, 3 World Championships Gold medals, 4 World Cup medals, and 12 World League medals. Also keep in mind that in most of those wins, he was the team's leader and centerpiece. Truly, Giba is one of the best to ever do it, and deservingly, he was inducted into the International Volleyball Hall of Fame.

Much like Giba, Sergio Santos, or Serginho, was an important part of maintaining Brazil as a volleyball powerhouse, and in creating an almost unbeatable squad during much of the 2000s. A well rounded volleyball team has a balance between offense and defense. While Giba was Brazil's offensive pillar, Sergio Santos was the main piece of the defensive system of a team that has won everything. Serginho's defense can be seen through his many, many individual awards in categories such as Best Libero, Best Digger, and Best Receiver. But Sergio is also not short of glories of his team, he played up to the age of 40 with the Brazillian national team, winning countless medals, and played beyond his 40's at the club stage, still as a crucial player to every team he was part of. What made Serginho a special player, besides his defensive talents, was his dynamism, being able to create good offensive situations when necessary.

One of the greatest volleyball players ever, Sergio Santos is the only male player to make it to four straight Olympic finals, and getting medals on all of them. The most remarkable of all of them was his last one, in 2016. Playing in Rio, in front of his country, Serginho was the most important player in Brazil's team throughout the tournament, leading them to the Gold medal. At 40 years old, Serginho, was elected the tournament's MVP, and with his second Olympic gold and tears in his eyes, he retired from the national team.

With one of the longest and most consistently successful careers in volleyball history, Sergey Tetyukhin is unquestionably a sport legend. Sergey's time with the Russian National team started early. He was part of the team that was crowned U21 World Champion in 1995, and just a year later he would join the senior team, going to his first Olympic Games, taking the biggest stage in sports at only 21. From 1996 until 2016, Tetyukhin competed in every edition of the Olympics, winning four medals on the way. Before the 2012 Olympics in London Sergey had still not achieved the ultimate goal and won an Olympic Gold medal. At 36, many saw this as his last opportunity to reach the highest place on the podium. Russia made it to the final against the favorites, the Brazilians. It seemed unlikely that Tetyukhin would win his Gold medal, especially after Brazil opened a 2 set advantage and had the chance to end the game. Somehow, the Russians came back, and Tetyukhin had achieved his career's greatest success. Still, he was not done, and came back for his 6th and final Olympic Games in 2016.

In addition to his four Olympic medals, Tetyukhin has also won two FIVB World Cups and one FIVB World League. At the club level, Sergey Tetyukhin played in two of the strongest leagues in the planet, the Russian League and the Italian League. His teams were always widely successful, winning not only national titles but also continental trophies. Tetyukhin's career and longevity made him a Russian legend. For that reason, at the opening ceremony of his last Olympics, he was chosen to carry Russia's flag into the stadium, representing a whole nation, for which he left it all out on the court.

The power of his spikes and what he accomplished with it is what makes Steve Timmons one of the best volleyball players of all time. One of the best and most talented offensive weapons in volleyball history, Timmons was part of the American generation that won two consecutive Olympic Gold medals. Alongside Karch Kiraly and others, Timmons is part of the reason why the United States has a tradition in volleyball, and is considered one of the sport's powerhouses. Known as a merciless and strong spiker, Timmons took pride in having an unstoppable spike, a part of his game that really worked on to get to a high level. Besides having three Olympic medals, Timmons is also a World Champion, winning the title with the United States in 1986. During his time playing volleyball Timmons was also recognized for his talents with individual awards. Probably the most important award in his career, Steve was chosen as the MVP of the 1984 Olympics, when he took home his first gold. In addition to that, he was selected as the FIVB's Best Blocker, and chosen as America's best men's volleyball player by the USOC. Part of a generation that will never be forgotten by the volleyball world, Steve Timmons stapled his name as one of the sport's greatest.