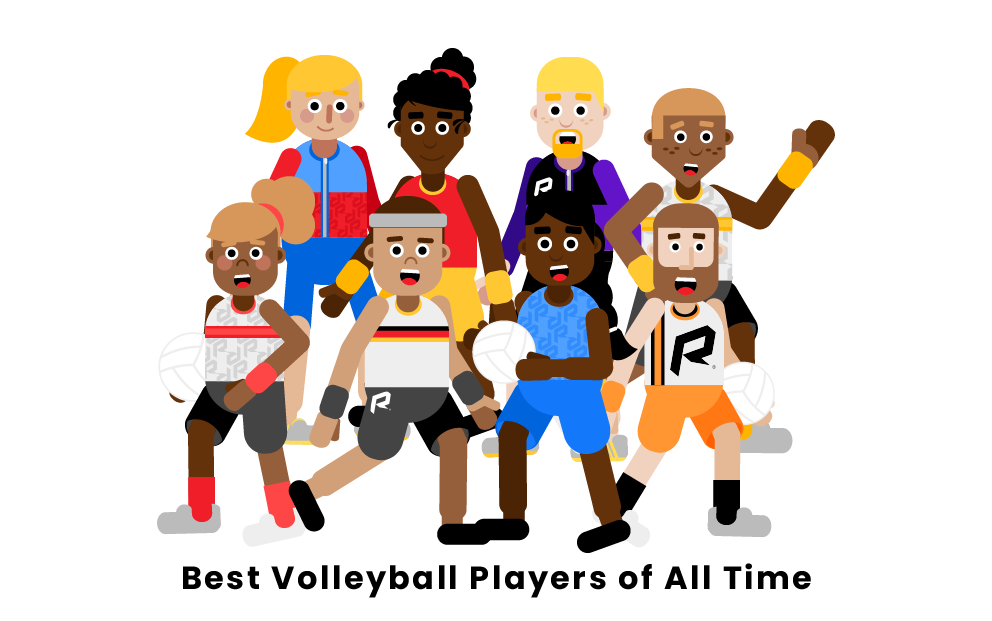 Who are the best volleyball players of all time?

The scope of Kiraly’s accomplishments in volleyball far outweighs any other player. His journey began with Santa Barbara High School, U.S. Junior National Team, and UCLA, where he won a combined five championships or tournaments. Later in his career, he earned volleyball’s triple crown, meaning that he won gold medals at the Olympic Games, the World Cup, and the World Championships back to back. He won two more Olympic gold medals, the most notable being how he won its first-ever beach volleyball competition. Also, as a beach volleyball player, he has won the most ever, with 148 wins.

After he retired, Kiraly decided to coach the U.S. Women’s National Team and since led them to their first-ever Olympic gold medal win in 2021. He’s also won a world championship as a coach and a player and is among only four ever to accomplish that.

However, her best accomplishments were when May-Treanor was her partner. They won three-straight Olympic gold medals from 2004 to 2012, winning 21 consecutive matches and only losing one set to Austria during their eleven years together. They also won three straight FIVB World Championship medals and 40 FIVB tournaments as a pair.

Misty May-Treanor entered the game before Jennings; in fact, when Jennings was in high school, she asked for her autograph. May-Treanor also won the Honda Broderick NCAA Athlete of the Year Award in 1998. The Olympics were also not new to Jennings when she came along. Before becoming Jennings' partner, May-Treanor tied for fifth in 2000. She was also the first to make it to 112 tournament wins, but Jennings beat her record in 2013. Along with these, she was able to earn 19 straight tournament victories.

However, like Jennings, May-Treanor’s best accomplishments came from their partnership. While on their Olympic gold-medal run, May-Treanor won women’s beach volleyball’s Most Outstanding Player distinction for their first two gold medals in 2004 and 2008. The three-straight championships in 2005, 2007, and 2009 with Jennings is another accomplishment that sets May-Treanor apart from other volleyball players.

Regla Torres is the best woman’s volleyball player of the 20th century. After all, at only 26 years old, she won the FIVB Player of the Century Award. She has played volleyball ever since she was eight, and by fourteen, she was playing for the Cuban Youth Nation Team. Then, by sixteen, she was on the Cuban National Team. She continued to improve and became the youngest player in volleyball history to win an Olympic gold medal at just seventeen in 1992. With Torres, the Cuban National team won two more Olympic gold medals in 1994 and 2000. They also won two World Championships and three FIVB World cup titles with Torres on the court.

She was inducted into the International Volleyball Hall of Fame in 2001 along with Karch Kiraly. She won many awards during her run, including three MVPs, two for Best Receiver, two for Best Blocker, and one for Best Hitter.

Gilberto Amaury de Godoy Filho, also known as Giba, was one of the best volleyball players in the world during his time. Every time that Brazil has gone international with Giba, they have always managed to make it to the podium. Known for his speed, skills, and leadership, he has played for a total of 11 teams, starting in 1996 and ending in 2014. He was also at the World League with Brazil a whopping eight times while earning the Best Server in the same league. Also, when he was captain of the Brazilian team, they won the Pan American Games. Not only that, but Giba and his team won three world championships in 2002, 2006, and 2010 and won MVP in 2006. Giba’s most significant accomplishments, though, are his gold medal and two silver medals at the Olympic Games. At the 2004 Olympic Games in Athens, in particular, he won MVP once more for his gold medal performance.

The FIVB considered Lorenzo Benadri to be at the same level as Karch Kiraly, but his accomplishments aren’t as many. The International Hall-of-Famer played for Italy during his career, and he is known for being a well-rounded player. Starting as a setter, he moved to be a hitter and a passer and had an overpowering presence on the court when he switched. He won a total of nine Italian Championships and was a part of nine Italian League teams. With Bernardi, Italy was able to win gold and silver at the  European Championship. They were also able to win silver in the FIVB World Cup. He was also elected MVP at the 1992 FIVB World League when the Italians won for their third time; he won five total FIVB World Titles with Italy. Italy also won the World Championship two times in a row, and the second time, Bernardi was awarded Best Player.

Mireya Luis is known for her insane spiking ability, which is attributed to her 36-inch vertical leap. She is only 5 foot 10 inches, which makes the height that she can jump impressive, as well as why she could easily keep up with other taller women. During the 1990s, Luis’s offensive game helped Cuba dominate Indoor Volleyball. Her offensive force helped Cuba; one of her notable accomplishments is that she has won a total of three FIVB World Cups with Cuba. In these World Cups and others that she has competed in, she has won a total of three MVP awards. Also, with Cuba, she has won two World Championships. Perhaps even more admirable is how she helped Cuba win silver in the 1986 World Championship after giving birth to her daughter only a few weeks earlier. She also won two Grand Prix, and the second won she won right before she retired.

When she was only eighteen, Lang Ping began her indoor volleyball career on the Chinese National Team, which was a new team at the time. She is known as the “Iron Hammer” and played outside hitter. She has won one bronze medal at the 1978 Asian Games, silver at the World Championships, and two gold medals at the 1981 and 1985 World Cup. The Hall of Famer’s greatest accomplishment is that she led China as the team captain to win the gold medal at the 1984 Olympic Games. Also, like Karch Kiraly, Lang Ping has a triple crown with her wins at the 1982 World Championships, the 1984 Olympic Games, and the 1985 World Cup.

After her playing years, Ping became a coach. She was the first woman to coach the Chinese National Team and coached her team to a bronze at the World cup, silver at the Olympic games and the World Championships, and gold at the 1998 Asian Games.

Renan Dal Zotto first began his indoor volleyball career at 16, and he started playing for Brazil right off the bat. The Hall-of-Famer had a 13-year career, and it was full of success. He played for five Italian clubs and, while doing so, won two Italian League Championships and two Italia Cup titles. Also, during his time there, he won three European Super Cups and one European Champions Cup. Then, Dal Zotto represented Brazil in three FIVB World Cups. His most notable successes are a silver medal at the 1984 Olympic Games, a gold at the Pan American Games in 1983, and a silver medal at the World Championship, all playing for Brazil. He was also a runner-up for the FIVB Player of the Century Award.

Renan Dal Zotto also became a coach after his indoor playing career. He coaches in the Brazilian Super League and chose to lead the Palmeiras/Parmalat team, and also coached the Brazil Men’s National Volleyball Team.

Sinjin Smith also won five International Championships from the Association of Volleyball Professionals (AVP) in 1979, 1981, 1982, 1988, and 1990. He has also played in a total of 416 career tournaments. He falls just short of Kirlay’s record of career victories with 139. He also won USA Volleyball All-American in 1983 and 1984, along with being named AVP Best Defensive Player from 1990 to 1992. His specialty as a player is a move called the Sideout, and he was called King of the Beach in his induction to the International Volleyball Hall of Fame.

Who is the best volleyball player of all time?

Karch Kiraly is the best volleyball player of all time, with three gold medals at the Olympic games and 148 beach volleyball tournament wins. He’s also the only person to win gold in indoor and beach volleyball. Kiraly's also successful as a coach, leading the U.S. Women’s National Team to their first-ever Olympic gold medal win in 2021. He is one of four in any sport to win a World Championship as a coach and player.

Who has won the most volleyball championships?

Pages Related to Top 10 Best Volleyball Players of All Time