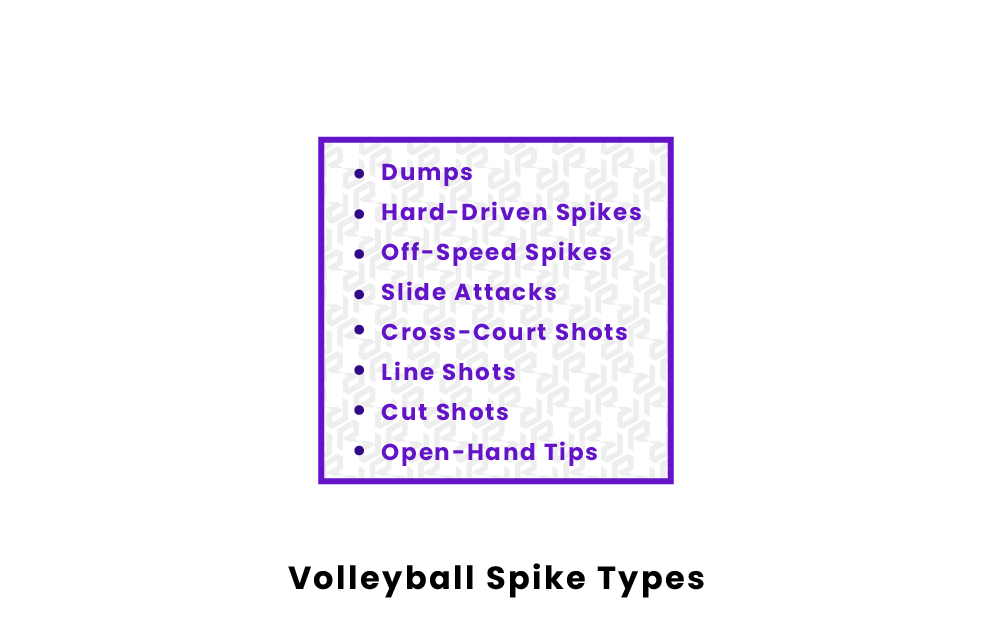 Hitting is one of the most important aspects to a team’s attack. Not all hits serve the same purpose, and they can come in a wide variety of speeds and angles. It is important to practice hitting in different scenarios as different types of shots may be better under certain circumstances.

What are the types of hits in volleyball?

The different types of volleyball hits include:

Dumping is a method of scoring where the setter touches the ball over the net instead of setting it (or simply spikes it instead of setting it). While the physical aspect of this skill is not difficult, the misdirection required for its success can pose quite a challenge. If the dump is telegraphed to the opposing team, it will be relatively easy to block, as the surprise aspect that gives the setter the advantage is now gone. It is important to make the opposing team fully believe that the setter is going to set the ball until it's already over the net.

Hard-driven spikes are a downward driven spike, relying fully on power to blast through the defense. This an effective method of scoring, however, what the spike has in power, it lacks in accuracy, and as a result can sometimes be easily blocked or received by a skilled defense. A well-placed hard-driven spike is extremely difficult to defend.

Off-speed spikes are the opposite of the hard-driven spike. This type of spike relies on accuracy to spike the ball towards an open or undefended area of the opponent's court. However, due to the focus on accuracy, it lacks power, and as a result is an easy receive if anticipated. This type of spike is useful against defenses with a strong block or defenses that have holes.

A slide attack is a spike done after a one-legged push off in a lateral direction, in order to lose the blockers before the spike. This is a more difficult spike as it requires advanced jumping power and the ability to spike while moving through the air laterally. This type of attack requires a lot of repetition and practice in order to get the timing down.

A cross-court shot is a spike that is hit from one side of the net, towards the opposite back corner of the opposing team’s court. This is a diagonal spike done in order to avoid blockers, forcing a skilled dig. This also gives the attacker the most room to land the spike in bounds as they are hitting to the largest part of the court from their angle.

A line shot is a spike hit directly along the opponent’s sideline. Not only is this difficult to defend, as it requires extreme precision to keep it along the line without landing out of bounds, but can also force a block-out (a failed block where the ball goes out of bounds after hitting the blocker) or a poor receive that goes out of bounds due to the balls close proximity to the line.

A cut shot is a spike somewhat similar to the cross court shot, except hit from a far sharper angle. The idea of this spike is to hit the ball as horizontally as possible, so that it never goes very far from the net, where it is extremely hard to receive the ball. This spike is effective against blockers as well, as the blockers directly face the spiker, meaning that they can only block shots hit forward, whereas a cut shot is hit sideways.

An open-handed tip is an open handed soft touch over the net. Similar to a dropshot in tennis or squash, this type of hit is used in order to catch opposing blockers and receivers off guard when they are expecting a spike. This is also similar to a dump from setters and focuses on catching the defense off-guard by placing the ball in an empty area.

A standing spike, also known as a down ball, is executed with both feet on the floor. If an attacker wishes to utilize surprise, they may use a standing spike rather than jumping to hit the ball. A standing spike is best performed by a back-row player and the setter must place the ball perfectly. When the ball is directly over the attacker’s forehead, they will quickly make a standing spike over the net, hopefully catching their opponent off-guard.

What are the most important hitting skills in volleyball?

The most important hitting skills in volleyball are spikes, which can take many different forms. A spike is the third contact with the ball, and it sends the ball over the net, ideally scoring against your opponent. Some of the most popular types of spike are hard-driven spikes, off-speed spikes, line shots, cut shots, and slide attacks. In addition to spiking, bumping, setting, and serving are also key skills to master when playing volleyball.