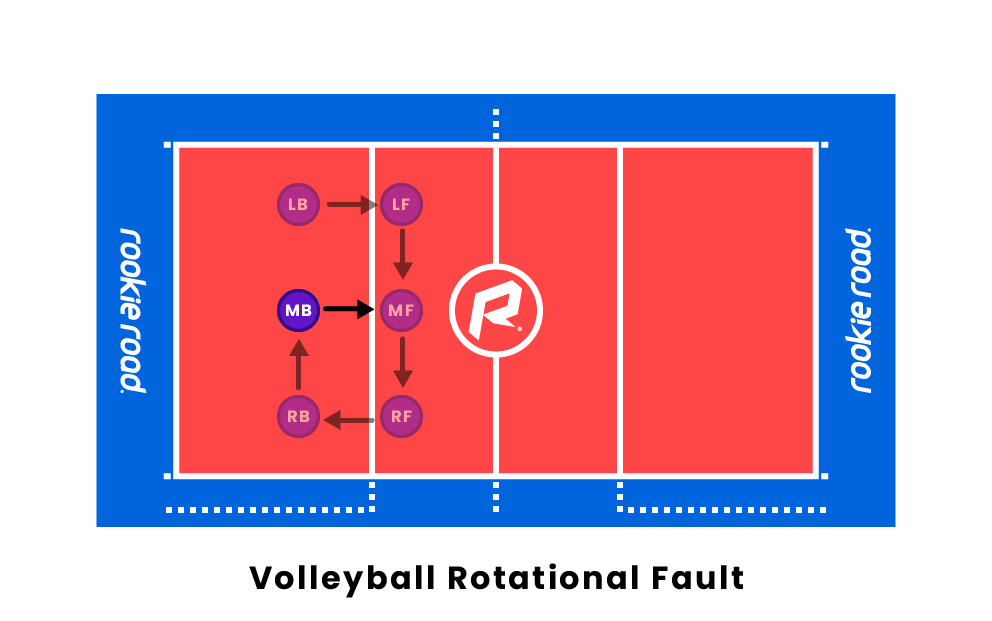 Like many other sports, volleyball is made up of athletes who play specific positions. An important facet of the game is the rule requiring that players move in a certain order. Whenever athletes get out of order or disrupt the rotation, they have committed a fault.

To learn what a rotational fault is, one must first understand the concept of positions in volleyball. There are six positions on a volleyball court that are numbered counterclockwise, starting from the far right position in the back row. That means that position number one is the spot where the server enters the court, number two is directly in front of that, and it goes all the way around, with position six directly to the left of position one. All volleyball players know these positions and must be aware of which one they’re supposed to be in before each set.

While the positions in volleyball are stationary, the athletes are not. Everyone, with the exception of the libero, is expected to rotate through each position on the court unless one player is substituted for another, who rotates into the newly vacant position for their teammate. The entire team rotates together every time the receiving side has a turn to serve. For example, if the receiving side blocks a spike from the other team and scores a point, it is now the receiving team’s serve. The receiving team will rotate clockwise, sending the player in position two to the back row (position one) to serve. If the team fails to do this, a rotational fault has taken place. Referees will call this anytime a player hasn’t rotated before the serve or if a player rotates into the wrong position.

If a team is out of rotation and the referee notices, resulting in the team being called for the fault, two things are likely to happen depending on whether the team was serving or receiving at the time of the fault. The first penalty is a point awarded to the opposing team, and the second action is the opposing team gaining the opportunity to serve. Of course, this action is irrelevant if the opposing team was already serving. These consequences are the same across all levels of play. 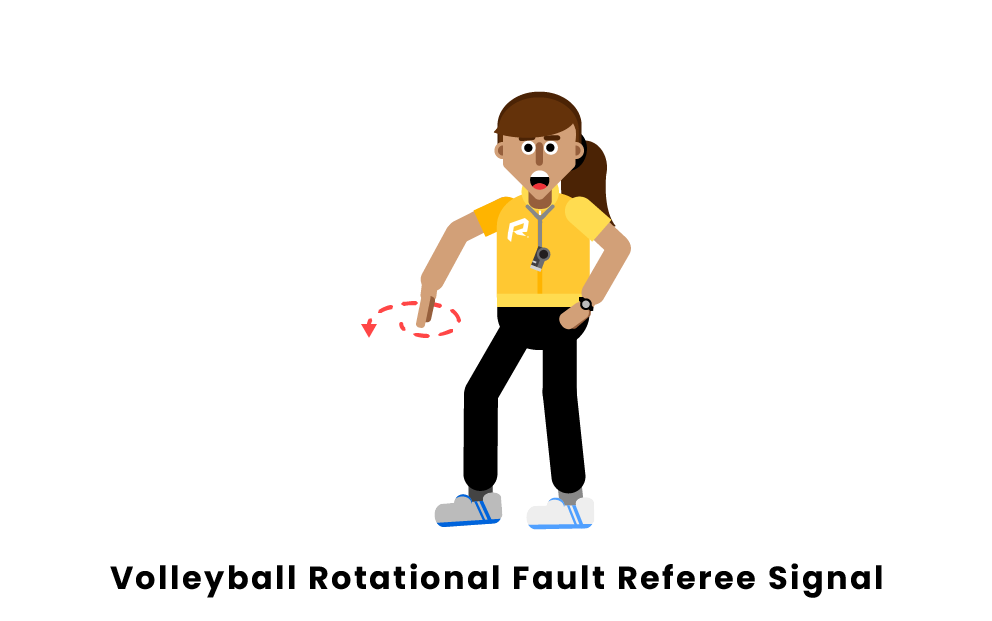 To signal a rotation fault, the referee will make a circular motion with their forefinger. The forefinger is pointed downwards, and the direction of the circle is clockwise. This signal is made at the waist level and circles no more than twice. After that, the referee will indicate the player or players who have committed the fault. The same signal is also used to call positional faults in volleyball.

What is a rotational fault?

A rotational fault is an error in which a player is not in the position that they are supposed to be in before a serve. Most commonly, this player has overlapped another player on their team or failed to move to the correct spot. The positions in volleyball are very important, and referees keep track of where every player on the court is supposed to be during each set. Players must rotate clockwise each time the receiving team becomes the serving team.

What are the consequences of being called for a rotational fault in volleyball?

The answer to this question relies on whether or not the team being called for a rotational fault is serving or receiving. If the team being called for the violation is receiving, the opposing team is given a point. If the team guilty of the offense is serving, they lose their chance to serve, and the other team gets a point. In the second instance, the opponent is given a chance to serve and a point.

How does the rotation work in volleyball?

There are six positions on a volleyball court. The far-right position in the back row is number one, and the rest of the positions are numbered counterclockwise from there. This means that the front row is numbered four, three, two from left to right, and the back row are five, six, one from left to right. Although the positions are numbered counterclockwise, players move clockwise through the positions. A team rotates every time they switch from receiving to serving.