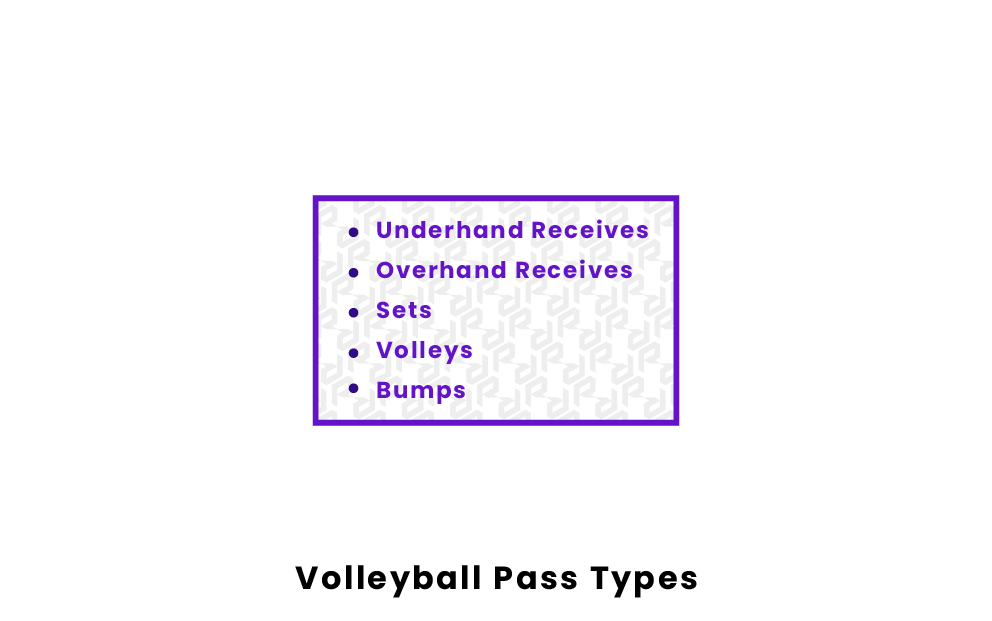 Passing is a type of skill used during every rally in volleyball. Passing typically makes up the first two touches of a rally, being the serve-receive and set. Without successful passing, a team will be unable to perform attacks and score points.

What are the types of passes in volleyball?

The different types of passing skills in volleyball include:

This is the common technique used in volleyball in order to receive the ball, done by clasping one’s hands in front of them and aligning their thumbs pointing straight forward. This creates a flat surface, making it easier to control the ball’s trajectory when received. While this is a basic move, the difficulty of the actual reception depends on the ball hit over. An underhand serve from a beginner is infinitely easier to receive than a spike from a professional.

While the underhand receive is the ideal approach to making a pass after the opposing team puts it over the net, it is not always possible. Sometimes a spike or serve will be higher than the receiver anticipated, and with a ball coming right at their chest or head at full speed, they do not always have time to readjust for an underhand receive. In these situations, an overhand receive is ideal. This is done by using all ten fingers with finesse to push the ball into the air. While this is similar to a set, there is a slight difference. While a set is meant to be hit at its peak height, just above the net, an overhand pass or receive should be pushed as high as possible towards the setter, in order to imitate an underhand receive. This then makes it easier for the setter to go right into a set.

A set is a lofted pass that peaks above the net, ideally around the height that the spikers hand can reach at a full powered jump. Only the setter has to set the ball during the game. However, other players, including middle blockers and even liberos will learn to set in case of a bad receive that does not go to the setter.

A set must be delicate, accurate, and well-timed for the spiker to hit. They also must be sure to avoid putting spin on the ball. If there is spin, the referee will sometimes call this as a double touch. Setting is one of the more difficult base skills in volleyball, and it can be even more difficult depending on the speed of play, position of the setter, and the quality of the pass to the setter.

Volleys are used to slow the ball down and pass it to teammates with control. To perform a volley, a player holds their hands above their heads at about a volleyball’s width apart. They get under the ball and point their body in the direction they want to pass. Then, using only their fingertips, the player receives and passes the ball to their teammate. A good volley will reduce the ball’s speed, setting a teammate up for a bump or spike.

Bumps are the most basic and most used form of pass in volleyball. To properly do a bump pass, a player must make a diamond shape with their arms and put their hands together with thumbs in parallel in the shape of the ball. With bent knees, the player must then center themselves behind the ball and hit it with the flatter inner part of their forearm. A good bump will propel the ball forward so that their teammate can pass the ball quickly or serve it up at the net.

What are the most important passing skills in volleyball?

The most important passing skills in volleyball are bumping, volleying, setting, and receiving. Bumping and volleying are the most basic forms of passes and they are essential to moving the ball around the court and scoring. Setting is a more advanced form of passing that is helpful for setting teammates up for a spike. Receiving is also important to master, as you must receive the ball with control in order to pass it well.