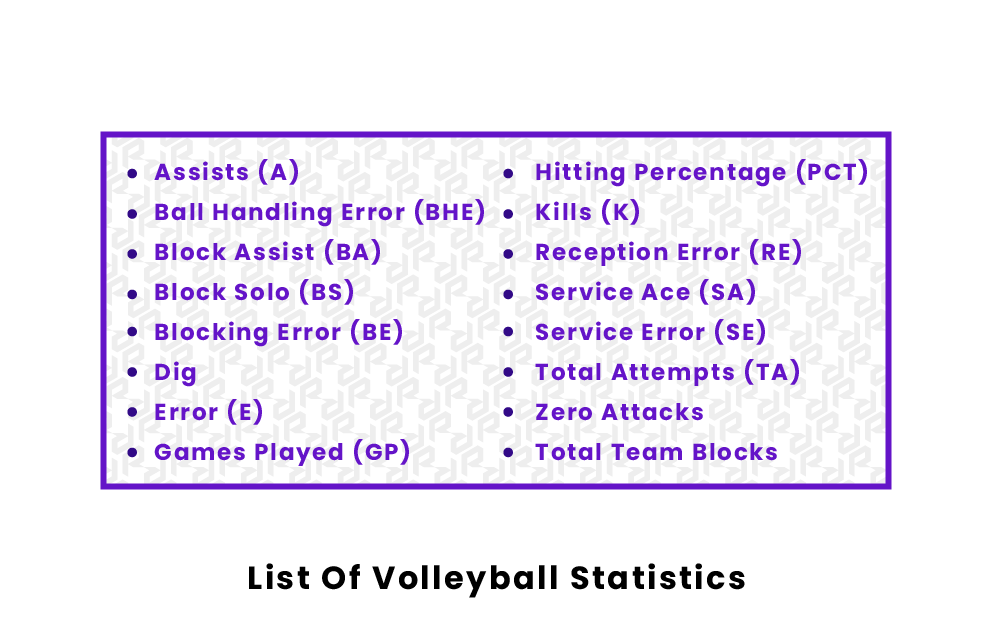 Volleyball is a quickly growing sport around the world, and has its own unique set of statistics that are recorded and interpreted in any given match. That being said, it is important for the casual learner, player, or observer to have a general understanding of these statistics so they may better and more properly be able to enjoy the game.

An assist is recorded for any player who makes the pass directly before a kill is made by their teammate. This pass can come from a regular pass, set, or a dig. The assist only counts if it is made before a kill; so not every point that is scored requires an assist.

A blocking assist happens when a receiving pair of players make a block together. If a kill attempt is blocked by two players together, a block assist is counted for both. However, even if only one of the two players makes contact in the block, it is still recorded as a block assist for both players. Block assists help show a team’s level of defensive teamwork.

As you may expect, a block solo occurs when a player makes a block entirely on their own accord, without the help or assistance of any of their teammates. Block solos, or solo blocks, are a very important skill for talented volleyball players to have. Middle hitters tend to get the most solo blocks as they are responsible for blocking quick hits towards the middle.

In a straightforward way, a dig is anytime a player is able to keep an incoming ball from hitting the ground on their side. More technically, a dig is recorded when a player successfully returns an attacking serve or attempt in a way that the ball goes over the net or makes it to a teammate as a pass.

Errors are made up of the various ways a team makes a mistake within their own attacking or defensive sequence. An attack error results when a team unsuccessfully gets the ball to the other side. There are several ways this may happen, including but not limited to hitting the ball out of bounds, being blocked by the opponent, or hitting the ball into the net.

Not quite as simple as it sounds, there is an important distinction to be noted between games and matches. A match is the whole event, made up of usually three to five games, or sets. Games typically go to 25 points. The games played metric represents the total number of games a player has played in a given match.

An important attacking statistic, hitting percentage shows how well a team or player is making successful kill attempts. Hitting percentage is calculated by subtracting errors from kills, and then dividing that by total attempts. This statistic is useful in determining how well a player or team is capitalizing on kill opportunities.

A very common statistic referenced in volleyball, kills happen when a player gets the ball over the net without the opponent returning it. More specifically, a kill results in a point no matter what, and is awarded to the player that hits the ball to the opposing team. Kills are most often highlighted with high velocity spikes that give the opponent no chance to return.

A service ace, most commonly referred to as just an “ace,” happens when a player’s serve makes it to the ground on the other team’s side without being touched by a player on that side. However, a serve does not have to hit the ground untouched to be awarded an ace. In fact, an ace is recorded for the server anytime a player makes a reception error when trying to receive the serve.

Service errors are similar to reception errors except they occur on the other side of the court. Service errors happen when a player unsuccessfully attempts a serve, and a point is awarded directly to the other team. Examples of service errors include when the ball does not make it over the net or goes out of bounds as well as when the server makes a line violation or serves out of rotation.

Generally not recorded in a box score, zero attacks are attacking hits that result in continued gameplay. This means that after a kill attempt, the returning team successfully digs and plays the attack and the normal game flow continues. In a zero attack, neither team has yet scored a point.

What is the most important stat in volleyball?