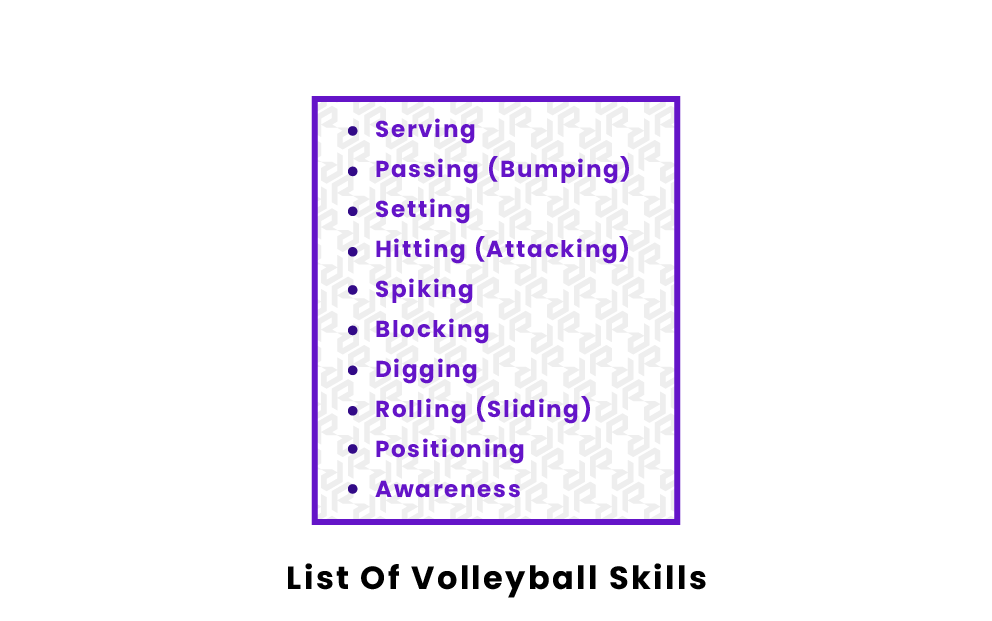 Volleyball is a highly technical sport that requires players to be proficient in a wide variety of skills. There are seven fundamental skills that every volleyball player must learn. Read on to learn more about various skills needed in volleyball.

Serving is one of the most crucial skills in volleyball, as it is how the ball is brought into play. A good serve can also put your opponent out of position, which will result in your team likely winning the point. Serves can either focus on power, accuracy, or both. Since players rotate through serving, it is important that all players are able to serve correctly. Serving in volleyball can be both overhand or underhand, so it is important to practice both types.

After serving, passing (also known as bumping, in reference to an underhand pass) is the most vital volleyball skill. Passing involves being the first person to come into contact with the ball after it crosses over the net. Passing can be underhand, which involves using the forearms as a bridge to bump the ball upward, or overhand (also known as setting, which we will discuss further below). Passing is crucial, as it sets up the next stage of a volley, which is the attack.

Setting in volleyball is the second hit after a bump or dig that sets up a teammate for a spike. Setting is crucial in volleyball, as a good set can enable your opponent to win the point with a well-placed spike, while a bad set will put your team out of position and possibly cost you the point. Volleyball players must practice setting the ball in training, which can be done individually or with teammates.

Once the first and second players on a volleyball team have contacted the ball by passing or setting, it is up to the rest of the players to set up an attack in order to send the ball back over the net. The most common way to do this is by hitting, which is a sharp, usually overhand blow to the ball designed to send it over the net. Hits come in various forms, but they require good passes and sets to make them work, and timing is crucial.

Spiking is a form of hitting that is very common in volleyball, and which most people are familiar with. Spiking involves a volleyball player making their team’s third contact with the ball by taking a few steps forward, jumping into the air as the second player sets the ball into position, and then driving it over the net with a hard, overhand strike that aims it towards the court on the other side. An effective spike can be lethal to the opposing team, as they are very hard to defend, which is why spiking is such a vital skill.

The key defensive tactic in volleyball, blocking involves players on the side of the net that is receiving the ball attempting to prevent the ball from coming down on their side. To block, players on the defending side jump vertically in front of the net when they sense that the ball is about to be hit over by the other team. They extend their arms vertically upwards, using their hands to form a wall that the ball can rebound off of. Blocking can be extremely effective against hits, and sometimes even against spikes, so it is a crucial skill to master. However, when blocking, it is vital to avoid touching the net, as this may result in a foul.

Digging in volleyball is a crucial defensive technique to learn that involves a player bumping a ball below their waist, closer to the floor than a regular bump. Digging is one of the more advanced skills in volleyball, but is extremely important. A player that is a solid digger will be able to keep rallies going for longer and also can lead to another player performing a set, which will result in their team winning more points.

Maintaining a proper defensive position helps players get ready to block a spike. Once the ball crosses the net to the other side, blocker should immediately bend their knees, get their hands above their head, and keep their eyes on the ball. This position will allow them to immediately react and defend against spikes from any direction.

One of the key components of blocking is identifying who on the opposing team you think will attack and how they will do so. Half of that battle is knowing basic game-play and volleyball strategies so you can see the best opportunities for an opposing player to spike or pass to another teammate. The other half of identifying attackers is seeing through misdirection. Other teams may try to fake a set or another move to get an easy opportunity, and a key part of blocking is seeing through that attempted misdirection.

What is the hardest skill to master in volleyball?

In a general sense, the most difficult skill to master in volleyball is serving. Serving is an extraordinarily important part of the game of volleyball, so much so that certain players earn their keep on volleyball teams as serving specialists. There are a variety of different serves one can master, with various different challenges to get the hang of each, making the art of the serve an extremely difficult skill to master in the game of volleyball.

What is the most important skill in volleyball?

There is no certain skill that is most important in volleyball. That being said, certain skills are more important for certain positions to learn. For example, setters should first learn how to set, as opposed to receiving. Front row players should also learn how to block and hit, as opposed to passing. Nonetheless, every player should learn nearly every skill in case they need to fill in for another player.

What skills are used to receive a serve in volleyball?

The two main skills used to receive a serve are the underhand receive and the overhand receive. The underhand receive is the most common and is when a player uses a platform to bump-pass the ball to the setter. This type of pass is better suited for controlling high velocity balls and topspin balls such as serves. Overhand receptions are usually used when a player misreads a serve and cannot position themselves for an underhand serve. This type of reception is less strong because it is much more difficult to control high-velocity serves with one’s fingertips.