How Long Is A Volleyball Game? 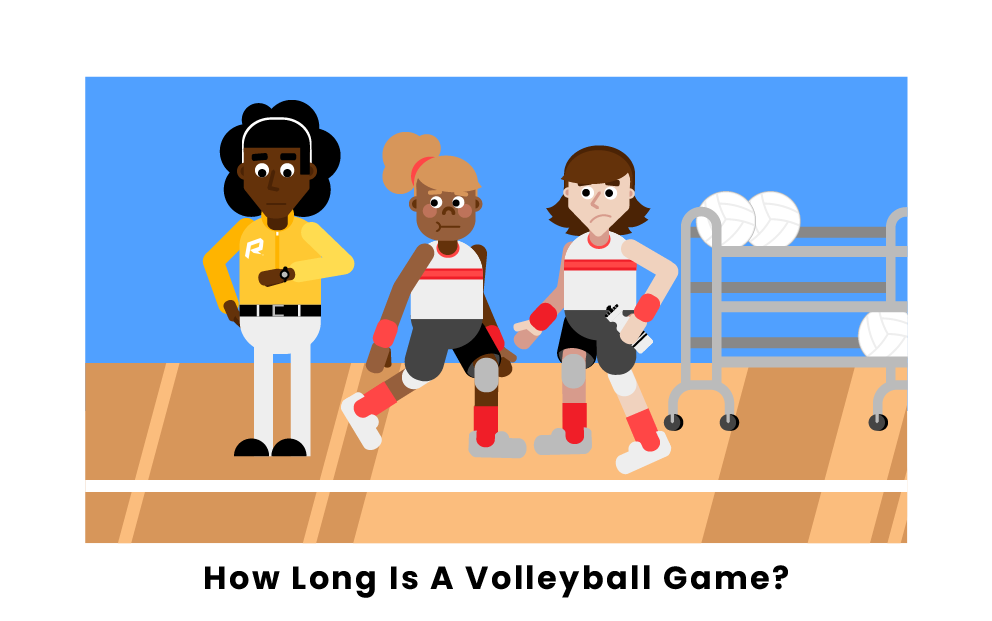 Unlike sports like football and basketball, volleyball is not played with a running game clock but instead in sets, with a designated amount of points to win a set and a certain amount of sets to win the game. Generally, volleyball games are played in a best 2-of-3 or best 3-of-5 set style. The format in which the game is played depends on the competition level, along with the style of play and individual match/tournament.

Depending on the level of play and specific competition, the amount of points needed to win a volleyball set varies. When it comes to indoor volleyball, a team needs to score 25 points to win a set. If the match goes to a tie-breaker set (third set in best 2-of-3 or fifth set in best 3-of-5), a team only needs to score 15 points to win the set. For beach volleyball, teams need to score 21 points to win a set, and, in the case of a tie-breaker set, only 15 points are needed to win. In both types of volleyball, teams need to win a set by at least two points. For example, if a team is the first to reach 25 points in an indoor volleyball set, but the opposing team has 24 points, the set will continue until one team leads by two points.

In a best 2-of-3 volleyball match, the team that wins two sets first wins the competition. Since the match can last for either two or three sets, there is no set time limit for this particular type of game. Generally, a single volleyball set will last anywhere from 20 to 30 minutes, so a best 2-of-3 match can be expected to last from 60 to 90 minutes. While these types of sets can be played at any skill level, they are most often found at the middle school, junior varsity, and international beach volleyball levels.

Similar to a best 2-of-3 volleyball game, a particular time limit does not constrain a best 3-of-5 game. The match can last anywhere from three to five sets, and the first team to win three sets wins the game. These games will last anywhere from 90 minutes to around two and a half hours, including breaks. Best 3-of-5 sets are often played at the varsity, college, and international indoor volleyball levels.

While less common, best of 2 matches are sometimes played at volleyball tournaments where there is a specific schedule and games are needed to be played within a certain time window. Unlike the other two types, these matches are timed, and two sets are always played. Within each set, teams try to score as many points as possible. At the conclusion of the two sets, the team’s points from both sets are tallied together, and the team with the higher score wins the game.

How long is a high school/college volleyball game?

A high school/college volleyball game is usually played in the best 3-of-5 set format. Therefore, the match can last between three and five sets, with the first team to win three sets declared as the winner. This typically equates to around 90 minutes up to two and a half hours. The first four sets are played to 25 points, and if the game goes into a fifth set to determine the winner, the set is played to 15 points. A team must lead by two or more points to win and conclude the set.

How long is a junior high volleyball game?

A junior high volleyball game will typically be shorter in duration than a high school or college match. Instead of best of five, games at this level are often played in the best 2-of-3 set format. Thus, a team needs to win only two sets to win the game, and games can last from two to three full sets. While games at this level have fewer sets, they may last as long as higher-level games due to the lower skill set and less aggressive playing style. Due to the number of sets they play, junior high volleyball games typically last anywhere from one hour to 90 minutes.

What is the longest professional volleyball game of all time?

The longest professional volleyball game of all time lasted a total of 85 hours. This game was completed by players from SVU Volleyball in the Netherlands in December of 2011. The competition consisted of 63 matches, 338 sets, and 14,635 total points scored. When it comes to the longest single volleyball match, it lasted for a total of 25 hours and was played between teams from Germany and Poland. The match began on a Saturday and was played overnight into Sunday morning before reaching a conclusion.

Pages Related to How Long Is A Volleyball Game?