How Does Scoring Work In Volleyball? 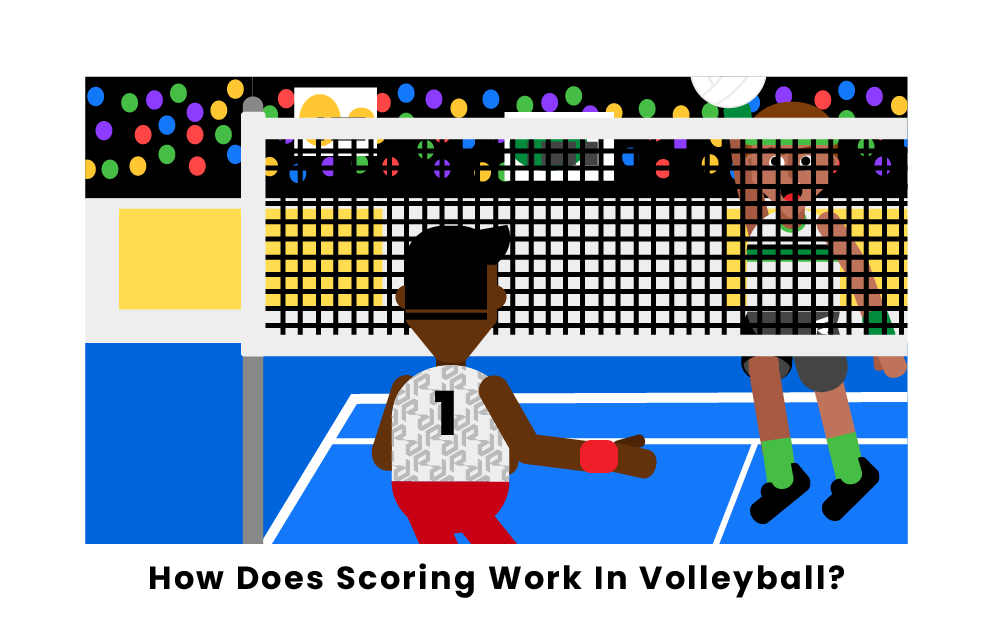 Volleyball games are played to 25 points with the need for a two-point margin of victory. Games consist of five sets, and teams must win three out of five sets to win. The final set is first to 15 points. In some tournaments, a score cap may be imposed by which if a team is winning and gets to 17 points, they will win the game regardless of the point margin.

Two different scoring methods are used in volleyball: side out scoring and rally scoring.

Side out scoring is a method of scoring in volleyball where only the serving team can earn a point by winning a rally.

Rally scoring is a type of scoring in volleyball where a point is awarded to one of the teams after each rally regardless of who is serving.

Unlike side out scoring, teams do not need to be serving to score points. If a team wins a rally, they will receive both the point and the serve regardless of whether or not they were serving during the previous play. Any stoppage of play during a game will result in a point for one team.

Rally scoring is the method of scoring used in Olympic Volleyball. These matches are played in a best of five sets format. Sets are played until one team reaches 25 points. If a fifth set is played, it will go until a team reaches 15 points. A team must win by a margin of two points to win the set.

Olympic beach volleyball uses rally scoring, where a point is earned on each service regardless of which team is serving. Games are played to 21 points in a best of three format. If a third set is required, the game will be played until one team reaches 15 points. All Olympic Volleyball games must be won by two points.

Professional volleyball matches in leagues around the world are sanctioned by the Fédération Internationale de Volleyball (FIVB). All volleyball games in FIVB-controlled leagues are scored using the same rules as in Olympic indoor volleyball, with matches played to the best of five sets, each set played to 25 points, and the final set played to 15 points.

In NCAA and other levels of college volleyball, matches are played in best of five sets. Much like Olympic volleyball, rally scoring is the scoring system used in college volleyball. Non-deciding sets are played until one team has scored 25 points and has a two-point advantage over the other team. The deciding set, or final set, is played to 15 points with the same two-point advantage rule in place.

High school volleyball games use scoring rules similar to those in collegiate and international play. Games are played to the best of five sets, and each set is played to 25 points, using rally scoring with a required two-point margin of victory. The final set is played to 15 points. Certain rules vary depending on the league.

Volleyball scoring works by athletes continuously attempting to earn points by putting the ball over the net in a way that their opponent can’t return. Scoring is based on a points system.

What is the scoring system in volleyball?

What is a volleyball game played to?

How does volleyball serving work?

A volleyball server will hit the ball over the net to the opponent, and the rally will be played until one team wins a point. When the team that serves the ball loses a rally, the other team will gain the service. A server cannot step over the serving line before hitting the ball, and they will lose the point if they serve out of bounds or into the net. The person in Zone 1, or the back right corner of the court, will be in the serving position.

What are the two types of scoring in volleyball?

There are two main types of scoring in volleyball: side out scoring and rally scoring. With side out scoring, only the serving team can score points after a rally. The team that is receiving the ball hopes to gain possession of the service so that they have the opportunity to earn points. In rally scoring, teams earn a point after each rally, regardless of which team has possession of the ball.

Pages Related to How Does Scoring Work In Volleyball?