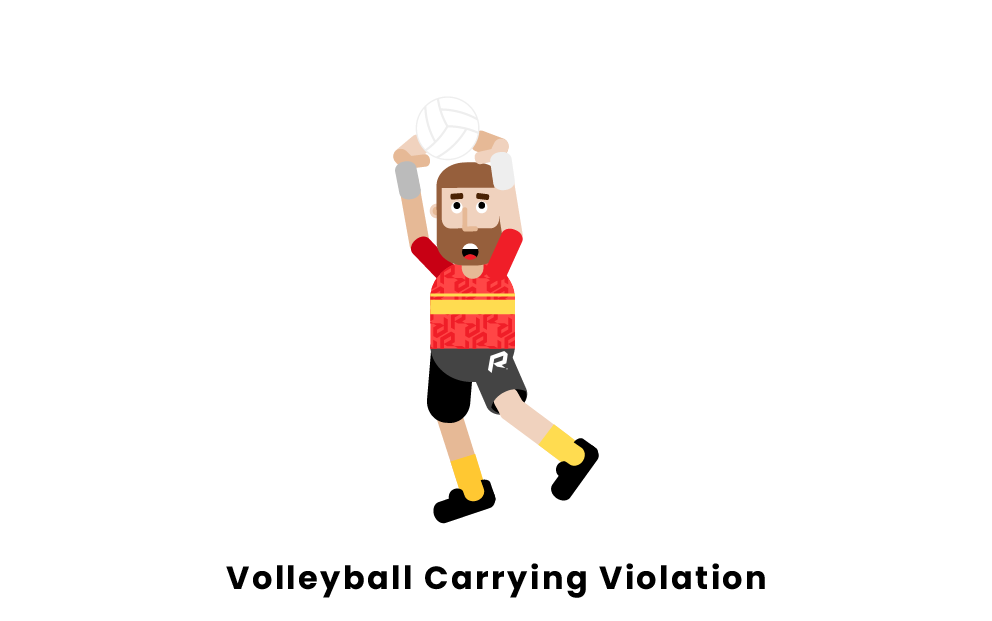 In volleyball, various violations can occur during play. One of the common forms of violation is a carry, also known as a lift or catch. Carrying occurs whenever a ball does not rebound from a player hitting it from their arms or hands but rather is caught or thrown with extended contact, often with the palms facing upwards.

In volleyball, there are strict rules regarding playing the ball during a rally. After the ball is served by one team, each team that receives the ball over the net has up to three touches before they must return the ball to the other side of the net. In order to volley the ball back over the net, players may strike or hit the ball with their arms or hands in various ways. However, many forms of contact with the volleyball are forbidden and will result in violations. One of these is the carry, also known as a lift or a catch. This occurs whenever a player has extended contact with the ball that does not cause the ball to rebound off of them. The Federation Internationale de Volleyball (FIVB), which is the worldwide governing body for volleyball, prohibits carrying in Rule 9 of the FIVB Volleyball Rulebook.

There are multiple ways in which a player can receive a carrying violation. The most common form of carrying violation is the carry while setting. This type of violation is caused by the setter, which is typically the player performing the second touch on the ball, which “sets” the attack for the third player, who strikes the ball over the net. Setters often commit carrying violations by allowing the ball to come too close to their face or chest while setting with their palms upright, which can cause the ball to remain in their hands too long before it is rebounded. This constitutes the ball being carried or lifted away. Another type of carrying that can occur is the carry while passing, which can occur if a player performs an incorrect platform, allowing the ball to contact the inner elbows, which can provide an illegal lift to the ball. A third type of carrying is the carry while attacking, in which a player attempting to strike the ball over the net may be caught attempting to guide or direct the ball towards a target with extended contact from the hand, rather than a clean hit. Finally, a carry can occur during an attempt to save the ball from landing out-of-bounds if the saving player contacts the ball for too long while trying to keep it inside the court’s boundaries.

In general, the rule against carrying should be interpreted as making sure that players do not allow the ball to make contact with their hands or arms for too long in such a way that they could be seen as carrying or lifting the ball. In volleyball, it is important that all strikes to the ball be clean, direct hits that rebound the ball successfully off of the hand or arm, and do not attempt to guide or throw it in a certain direction. 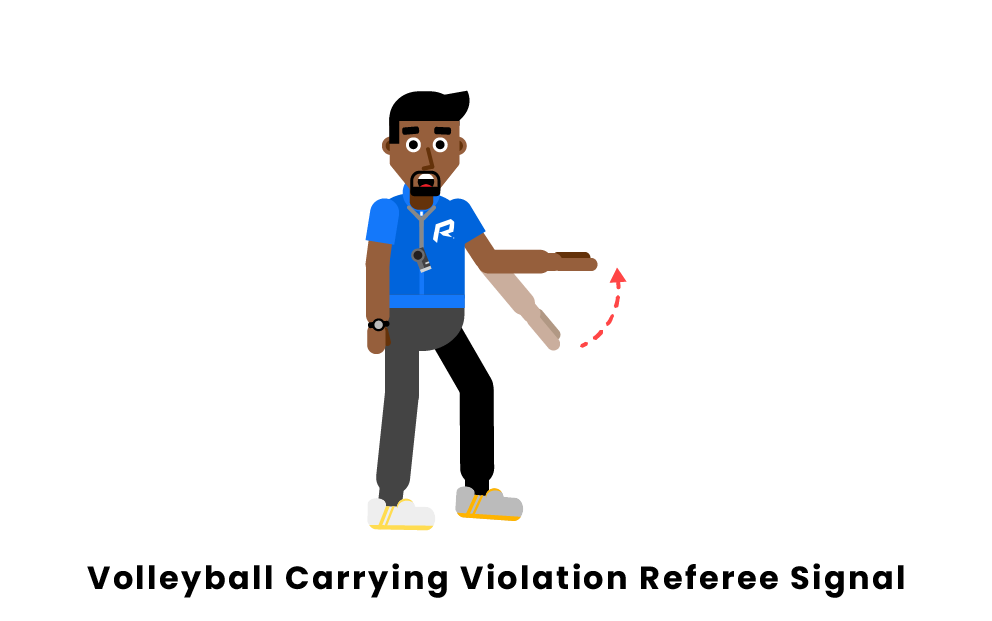 According to the FIVB Volleyball Rulebook, the official signal for a carrying violation, known as a “catch,” involves the referee holding out one arm with their palm facing upward. They then slowly bend the elbow to lift the palm upwards in a scooping motion, which is reminiscent of the motion used to lift or carry the ball.

What is carrying in volleyball?

What are the consequences of being called for carrying in volleyball?

If a volleyball player is called for a carrying violation, they receive a fault, and the usual consequence is a side-out. A side-out is a term in volleyball that indicates that the team causing the fault has lost the rally. Side-outs result in the non-fouling team receiving an automatic point and also the ball to serve.

Can you catch the ball in volleyball?

In volleyball, it is illegal to catch the ball during a rally. If the ball has been served by one team, a rally has begun. Both teams must pass and return the ball over the net with clean hits to keep the rally going, ending only when the ball lands on one side without being touched or lands out of bounds, which leads to a point being awarded to the appropriate team. If a player on one team deliberately or accidentally catches a ball while it is being rallied, they will receive a carrying, or “catching,” violation. Once this occurs, the offending team will receive a fault, losing the point and surrendering the ball to the other team for a serve.