The Top 10 Rules Of Ultimate Frisbee 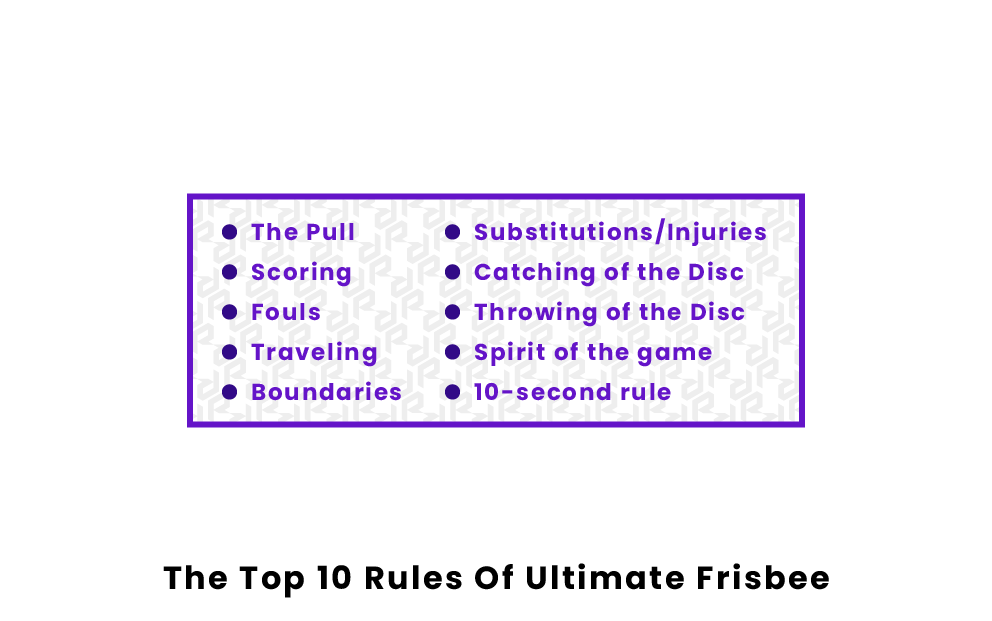 Ultimate Frisbee is a non-contact sport played with a disc on a rectangular field. Ultimate frisbee, also known as “Ultimate,” originated in Maplewood, New Jersey in 1968 when a man named Joel Silver brought up the idea at a student council meeting. Once approved and supported by staff and students, Silver and friends, Buzzy Hellring and Jon Hines, began writing the rules, working out the kinks as they completed a variety of rough drafts. Upon completion of the rulebook, the first high school game was played in 1970, and the first collegiate game was played in 1972, when Rutgers beat Princeton 29-27. The sport continued to grow throughout the 1970s, eventually culminating in the formation of the Ultimate Players Association (UPA) in 1979. Today over 5 million players play the game in the United States in one way or another, mostly because it can be played competitively in league or casually with friends and family. Overall, Ultimate Frisbee is one of the fastest growing sports in the United States today because of its simple and low-maintenance nature.

What are the rules of ultimate frisbee?

In Ultimate Frisbee, the initial throw-off from one team to the other team is called the pull.  A coin toss determines who “pulls” first and the action signifies the beginning of game action. In addition to the beginning of the game, a pull will take place after one team scores. In this case, the teams will switch sides, allowing a few minutes of real time to pass before the scoring team continues the game by pulling the disc again. If the pull goes out of bounds, the receiving team may pick up the disc in an approximate location on the same side of the field that the disc left the field or they may call a “brick,” meaning that play will begin at the predetermined brick location. This location is often 20 yards removed from the end zone, giving the receiving team a small advantage on their next possession as a consequence for the bad pull.  In many ways, the process of a pull is extremely similar to what we know as a kickoff in American football in terms of the timing and procedure of the action.

In order to score in ultimate frisbee, you must catch the frisbee in the designated area called the “end zone.”  In order for a score to count, the player catching the disk must touch at least one body part down in the end zone with full and complete possession of the disc. There are end zones on both sides of the field, but each team may only score on one of them at a given time. In other words, one end zone can be used for one specific team to score, and the other will be used by the other team. After a team scores, the teams may switch end zones; however, there will never be a time when both end zones can be used for one team to score at the same time. In most official ultimate frisbee leagues, the first team to score 15 goals wins the game, but theoretically, recreational games can be played to any amount of goals.

As opposed to most other sports, ultimate frisbee relies on self-officiating for the most part. Although referees are present in professional/league games, they are mostly used to verify the score and keep game-flow moving forward.

All the fouls/infractions listed below result in the defensive team gaining possession of the disc.

One of the most essential rules in ultimate frisbee is that a player may not run while the frisbee is in his or her hands. If a player runs with the frisbee, it is deemed a travel, and the other team will get control of the disc. There is one exception to the rule above in that a player who is running to catch a frisbee is given a 3 stepp grace period upon gaining control of the disc. This is the case because players are often running at high speeds to catch up to the disc, and it only makes sense that they should be given a few steps to collect themselves. This is a fundamental rule in ultimate frisbee, while also serving as one of the main differentiating factors of the sport in general.

Recreational games of ultimate frisbee can be played on any size field, but official games played at the highest level have a few unifying characteristics. For one, it will always be played on a rectangular field, with endzones on each of the short sides of the field. In total, the longer sides of the field will be about 100 meters and the short sides will be around 35- 40 meters. In fields of this size, the end zone line will be 18 meters in on each side of the long side, creating 64 meters of play in between these scoring zones. If a player goes outside of this rectangular field, it is deemed out of bounds and the other team gains possession of the disc. Remember, a player is deemed out of bounds if they pass the boundary on either the short or long side of the field.

Listed below, are a few of the most common situations that permit a stoppage in live game play (other than scoring).

Each team is permitted 2 timeouts, or pauses in play, per half of game play. Once the disc has been pulled, the only player who may call a timeout for his or her team is the offensive player with possession of the disc. This timeout will last 75 seconds.

Similar to catching the disc, passing the disc is also a pretty simple rule. However, there are a few main ways to go about passing the disc. An offensive player may throw the disc with one hand, either using forehand (right to left) or backhand technique (left to right). They may also throw the disc with both hands for shorter passes, but this is fairly rare. An offensive player is not allowed to knee, kick, or headbutt the disc as a means to advance the disc.

There are two main ways for the opposing team to get possession of the disc without a score from the other team. The main way would be an incomplete pass, which consists of any pass that hits the ground upon its release from the throwing player. This can occur if the pass is batted down by the opponent or dropped/thrown away by the offensive player. The second way would be an out of bounds throw. An out of bounds throw is exactly what it sounds like. If the disc is thrown/caught outside the boundary then the other team will gain possession of the disc. However, the offensive player may jump outside the boundary and throw the disc in mid-air in attempt to save the turnover. These plays are rare, but still occur every once in a while.

In ultimate frisbee, the 10 second rule prevents players who successfully catch a disc from holding onto the disc for more than 10 seconds. In recreational play, it is up to the defending team to call the offensive player out on this violation, while in official league play, a referee has the authority to step in and call the violation. If it was not part of the game, then the offensive team could theoretically hold on to the disc until a player becomes wide open, at which point the player could make an easy pass to his or her teammate. Overall, the 10 second rule is a part of the ultimate frisbee rulebook in order to keep the pace of the play going, similar to that of the play clock in football or the shot clock in basketball.

Pages Related to The Top 10 Rules Of Ultimate Frisbee