How Long Is An Ultimate Frisbee Game? 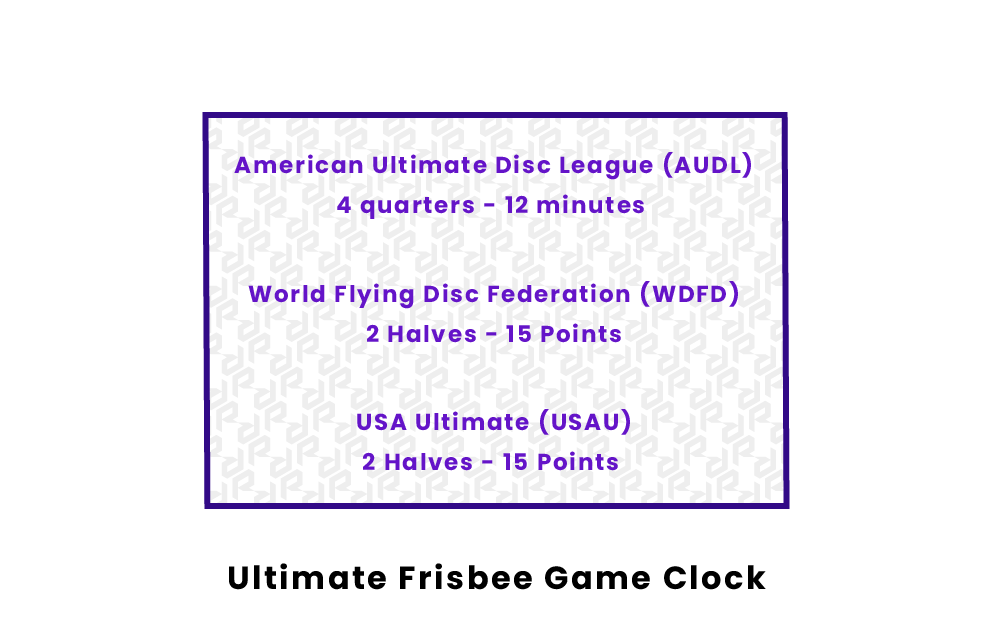 A game of ultimate frisbee can vary in length, depending on what league you are playing in. Teams playing under the American Ultimate Disc League (AUDL) play in four 12-minute quarters with a 10-30 minute halftime chosen by the home team 24 hours prior to the game. On the other hand, teams playing under the World Flying Disc Federation (WDFD) have to get 15 goals to win, with halftime occurring when one of the teams scores eight goals. Although there are more specific rules regarding time caps, the USA Ultimate (USAU) rules are mostly compatible with the WFDF rules, with the team to reach 15 goals being the winner and halftime occurring at eight goals and lasting 10 minutes.

A game under the American Ultimate Disc League (AUDL) rules lasts around 48 minutes, broken up into four 12-minute quarters, with the possibility of overtime; halftime lasts 10-30 minutes. There are more technical rules for timing with pulls. Pulls occur when the defense throws the disc to initiate play. This can happen at the start of the game, after halftime, or following a goal. For the 2nd quarter, 4th quarter, and overtime pulls, there’s a 2.5-minute time limit. In the event of a goal, the receiving team has 30 seconds to prepare, and the pulling team has 50 seconds. Teams are penalized if they cause a delay. There are also timeouts that last 90 seconds, injured players must stop bleeding within 60 seconds or they are replaced, and ejected players have 30 seconds to be replaced. Two overtime periods are possible, with the first one lasting five minutes and the second one, if needed, lasting until one of the teams scores.

According to the World Flying Disc Federation (WFDF) regulations, a game is won by the first team to score 15 goals. When one of the teams scores eight goals, halftime is called. Normally, play also stops when a team foul occurs, but if the fouled player calls for a “play on” and their team retains possession, then play can continue.

There are also safety stoppages, including injury and technical stoppages. Injury stoppages can be requested by the injured player or by the injured player’s teammates. They should be called at the time of injury unless the injured player decides to continue playing before stoppage is called. A technical stoppage occurs when a player on either team thinks another player is endangered from a wound. The wounded player is then given 70 seconds to solve this problem. Technical stoppages can also occur if the thrower finds that the disc is damaged severely. If a technical call is being made while the disc is in the air, the outcome may vary, depending on if the call affected play or not. If play is impacted, the disc is returned to the thrower; otherwise, the completion or turnover remains in place, and the game resumes from that point.

The USA Ultimate (USAU) rules state that a game finishes when a team reaches a total of 15 points. Halftime lasts for 10 minutes and happens when one team scores eight goals. The receiving team should be ready as soon as halftime ends, while the defense has 15 seconds to release the pull.

The USAU rules also have time caps that are implemented after a predetermined length of time has passed; the exact time varies by game. Play continues after a soft cap until the attempt of scoring is finished. If the game total is not reached after this try, a new target score is decided by adding one goal to the team with the higher score. A hard cap is used at the end of the game, and play also continues until the scoring attempt is finished. If the game is still tied after this, then play will continue until one of the teams scores. If it is not tied, the team with the higher score wins. There’s also the halftime cap, which continues play until the current scoring attempt is finished. Afterward, if the halftime target (eight points) has not been reached, then one goal is added to the higher score, and that number is the new halftime target.

Pages Related to How Long Is An Ultimate Frisbee Game?