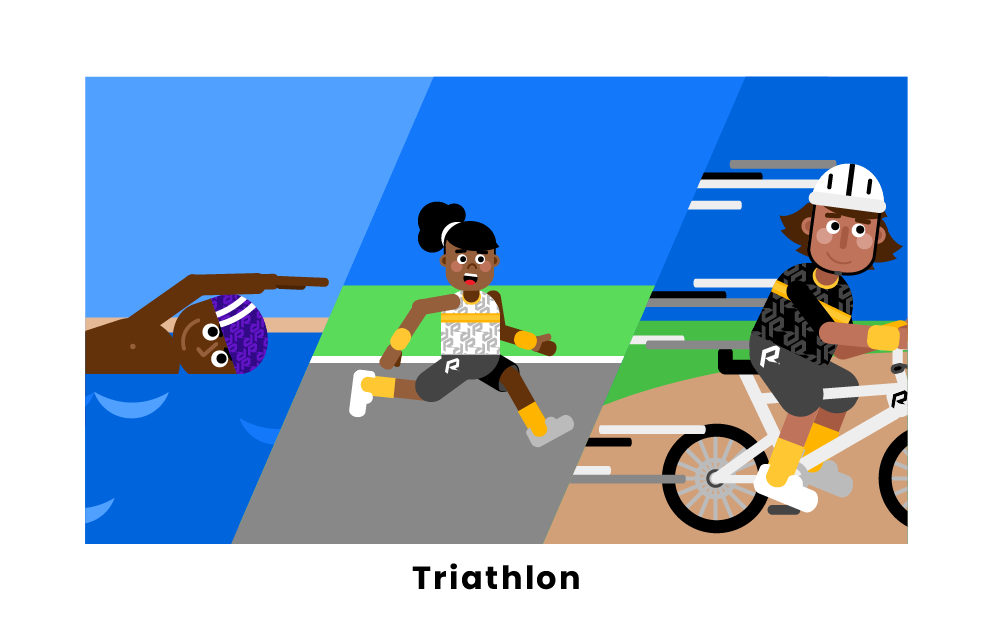 A triathlon is a race event consisting of three consecutive parts, each a race of a different sport. There are multiple variations of the triathlon but the most popular form involves swimming, cycling, and running as the three parts of the race.

Each of the three parts of the race are completed sequentially with short breaks between each segment, called a transition stage, where competitors may take a short rest and change equipment for the next stage of the race. The most common form of triathlon has participants swim, then cycle, then finish with running. 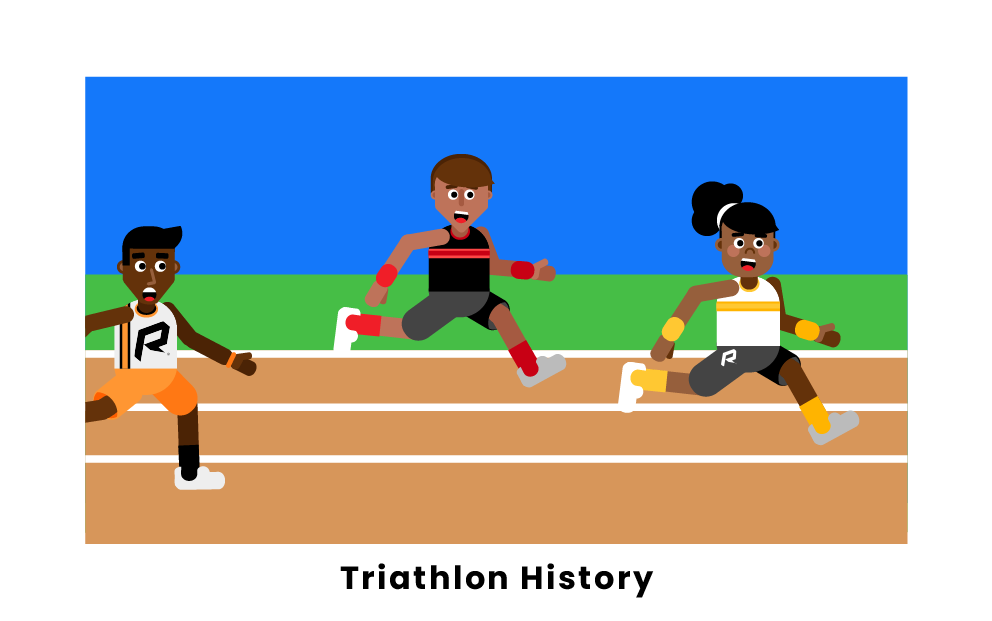 The triathlon has its origins in 1920s France where athletes competed in an event called, "Les trois sports," which literally translates to, "the three sports." The original triathlon had competitors swim across the Marne river, bike for 12 kilometers (about 7.5 miles), and finish with a 3 kilometer (about 1.8 miles) run.

Triathlons in America began to become more popular in the 1970s in Southern California. The International Triathlon Union (ITU) was founded in 1989 and is the highest governing body of the sport. 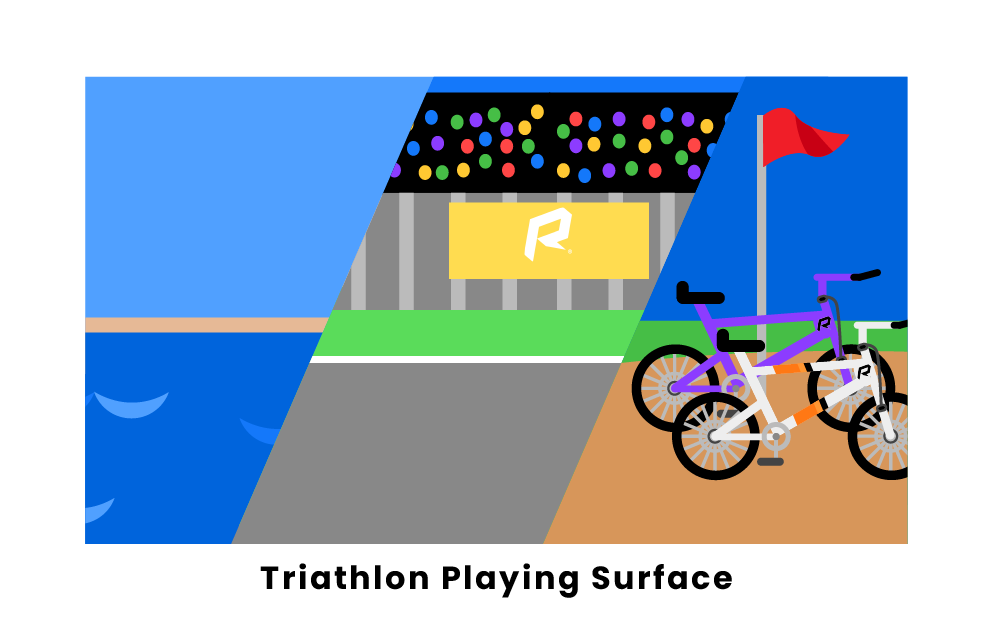 You may experience various running surfaces while competing in a triathlon, but nothing ever too difficult to handle easily. Let's tackle each of the three main events and some surfaces you may encounter.

The swimming segment of the triathlon only consists of being in water, so there aren't very many different surfaces you can encounter. However, the cycling and running stages of the event can have you travel through various surfaces.

You may also encounter inclement weather during a triathlon, assuming the event is not cancelled. If that is the case, expect some of the surfaces listed above, such as asphalt and dirt, to become more difficult to navigate. 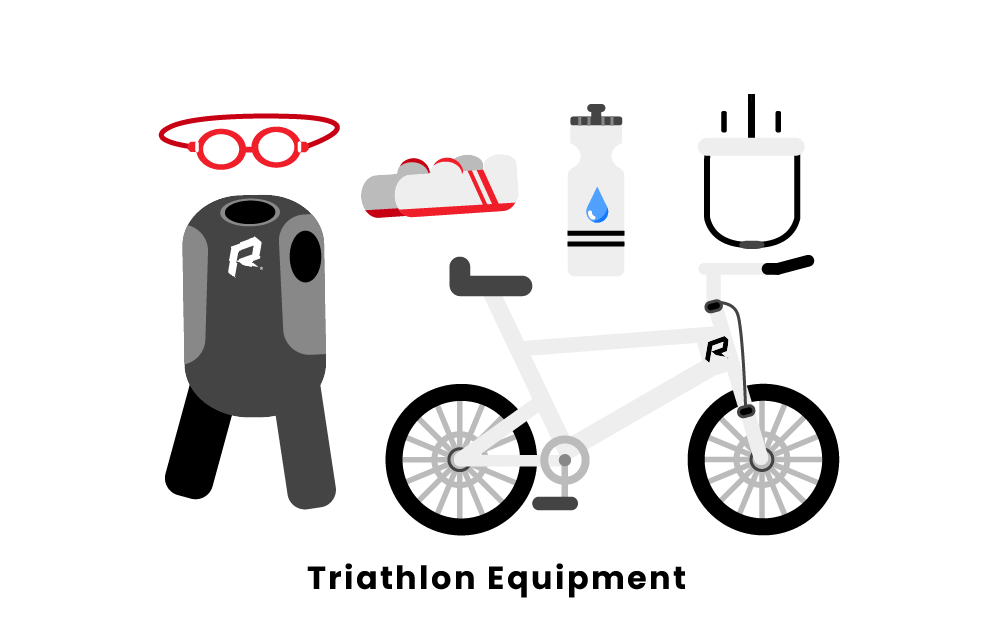 If you want to be more competitive and perform at your best, here is some additional gear we recommend to get an extra edge on your competition: 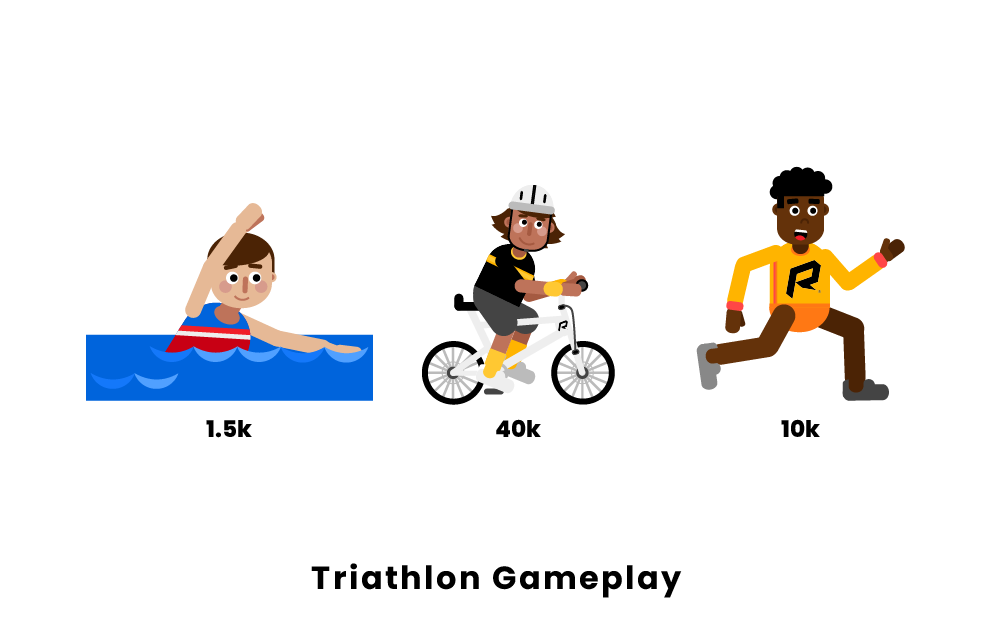 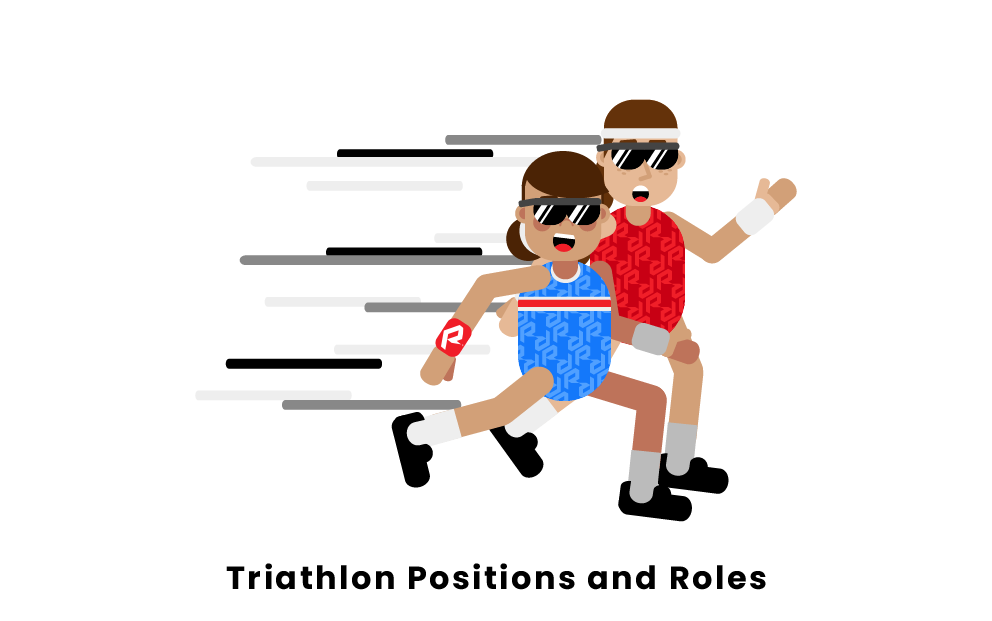 Triathlon can be a team event but aforementioned, there are no named roles or positions for each of the members of the team to fill. 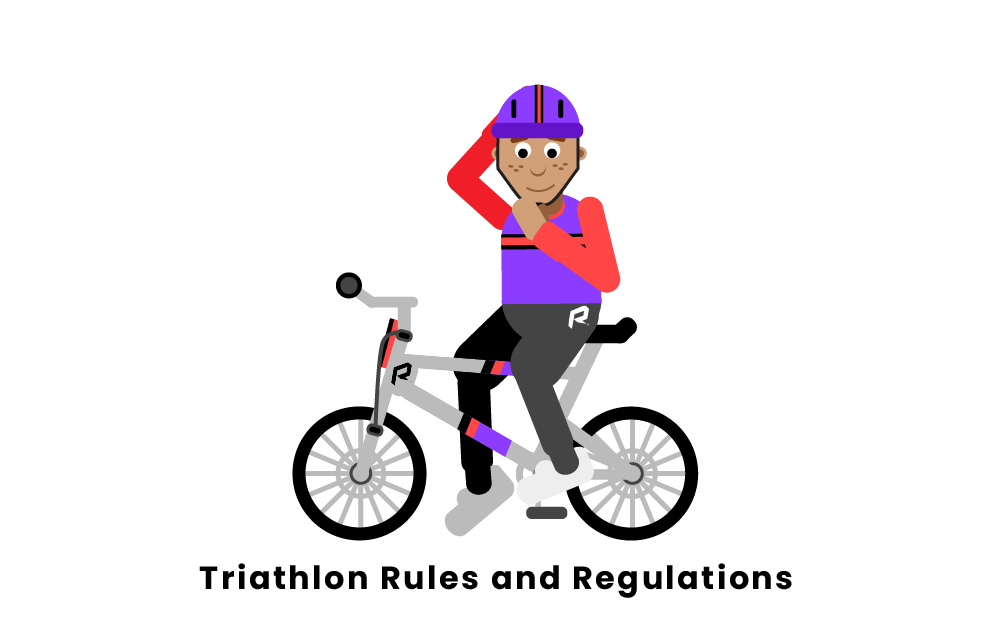 There are many rules in triathlon, and rules can vary from event to event. To best grasp as many rules as possible, let's take a look at Team USA's most common rule violations and the penalties associated with each of the violations.

Helmets: Only pre-approved helmets may be worn; helmets must be on at all times while riding a bike.

Chin Straps: The chin straps of the helmet must be buckled while riding a bike.

Unsportsmanlike Conduct: No foul or harsh language or unsportsmanlike conduct directed at race officials, other athletes, or outside viewers.

Outside Assistance: No assistance except for race officials or medical staff.

Transition Area: All equipment must be stored properly; no tampering with other competitor's equipment; no outside assistance in the transition area.

Course: Participants must remain on the course at all times and obey all pertaining traffic laws. 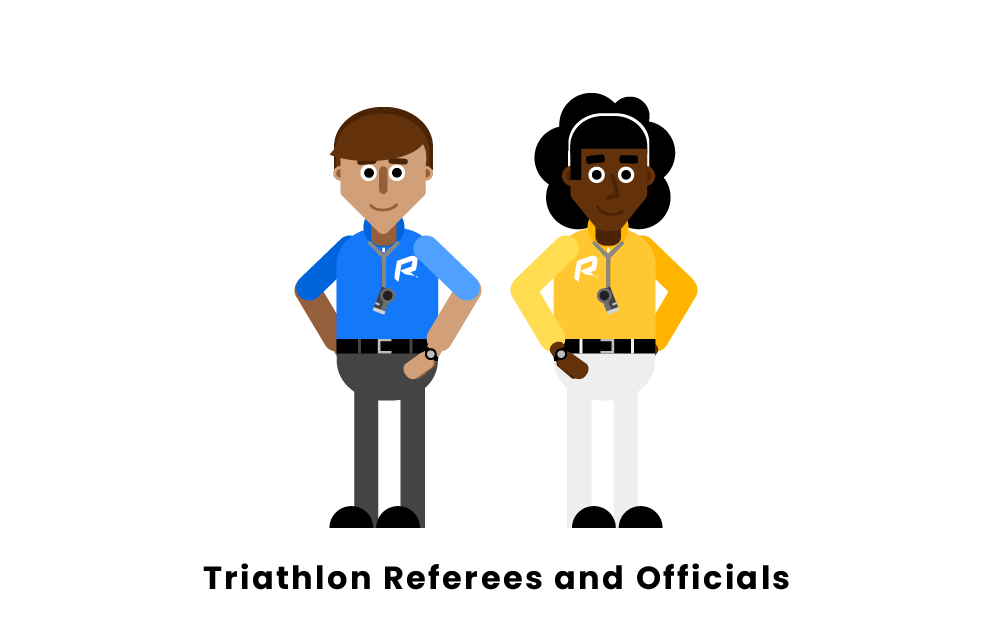 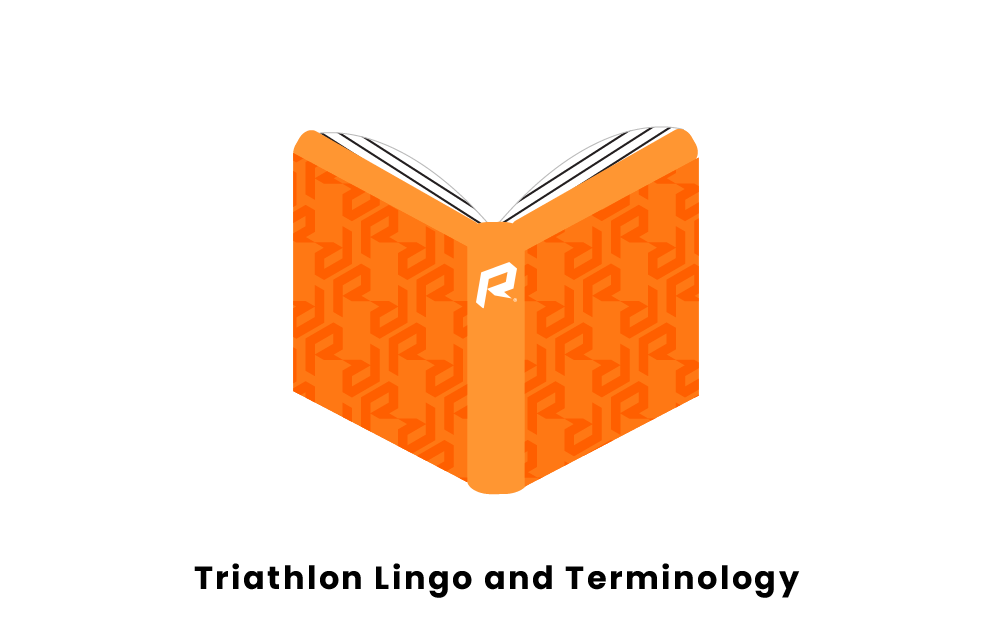 Just like every other sport, triathlon has lingo and terminology that is completely unique to the sport. Many of the terms relate to actions while competing or shortened acronyms. Check out a list of terms below:

Bonk: When an athlete begins to run out of energy and seemingly hit a wall.

Hammer: When an athlete begins to go very quickly on a bike, hammering forward.

Tuck: An aerodynamic position that racers use on a bike to maximize speed.

Beans: Refers to small bean-like tablets that competitors carry. They are used as an energy boost. 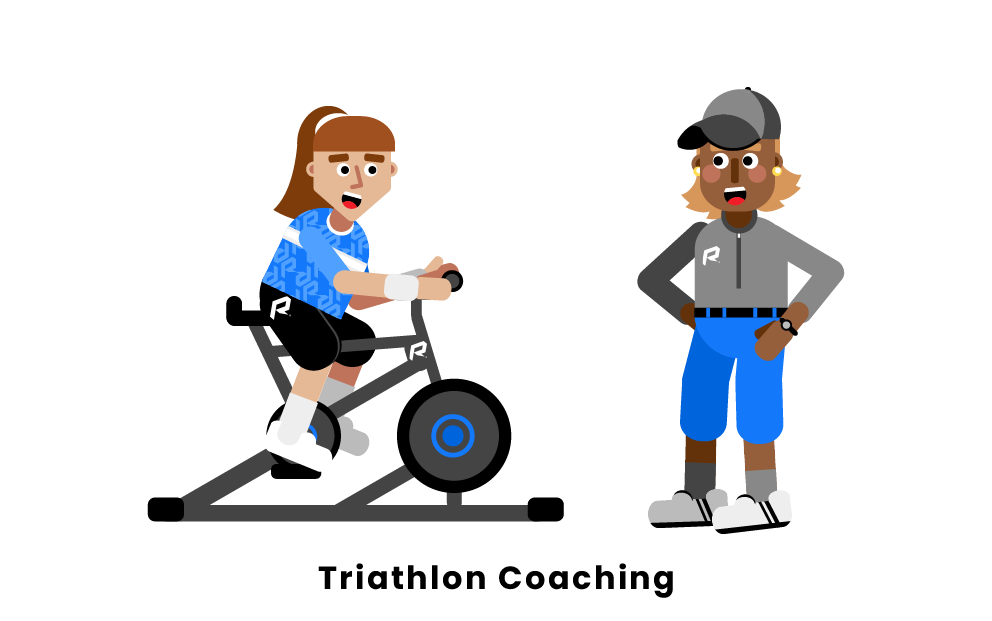 When picking a coach, you should identify areas you need to improve in before the triathlon, whether it be pacing, strategy, or fundamentals. A coach should understand all of the rules of a triathlon and help you prepare for multiple situations. 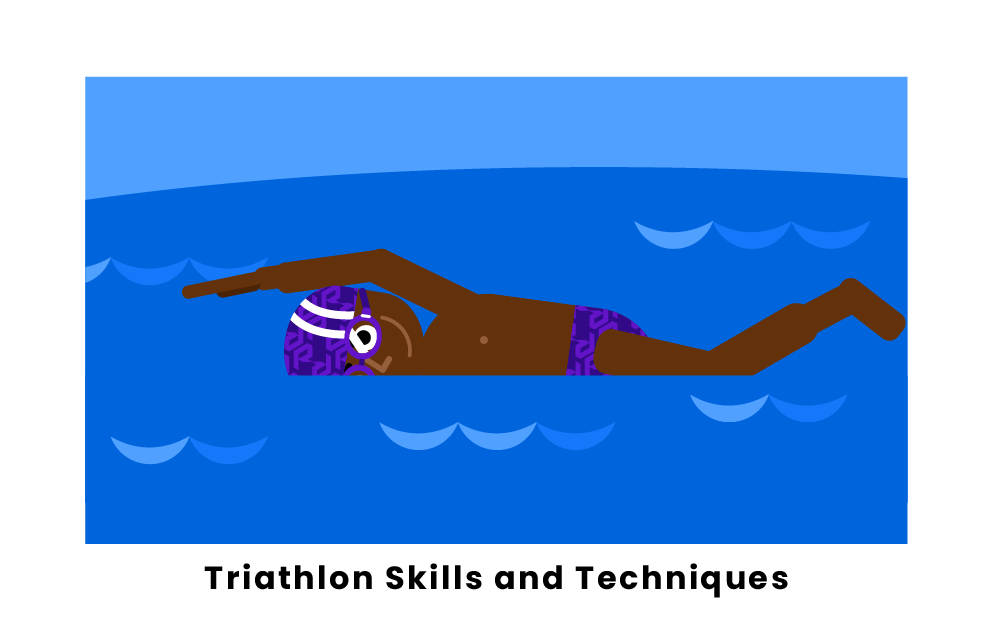 There are three core segments of a triathlon, so improving on fundamental techniques for each stage of the race is vital for success. Here are some tips for each section of the race:

Slice your hand into the water at the goggle line and drive it forward to maximize efficiency. Minimize kicking to improve balance in the water.

Learn how to corner smooth and fast to shave seconds off your time. Shift early and often to prevent becoming stuck in a low gear early on.

Practice planting your foot near your center of gravity to maintain balance and get the most out of each step. Loosen your arms and shoulders to prevent cramping and maintain a smooth running motion. 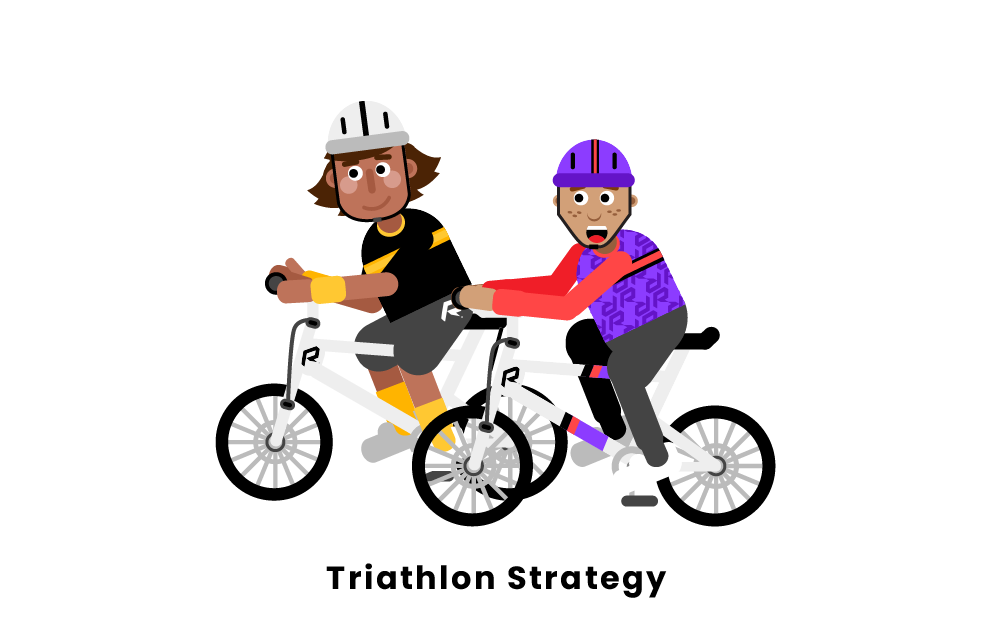 Most strategies involved in triathlon revolve around pacing and when to attack the front of the group to take the lead. These strategies rely heavily on a racer knowing their own personal limits and just how far they can push themselves.

Another important element of pacing is timing and knowing when to begin pushing forward. Much of this has to do with knowing the track you are racing on, as well as the environment you are racing in. You may not be able to push as hard on a hot day or on a wet surface, but you may feel confident pushing yourself a little harder in cold water. Some racers may choose to avoid grabbing water from volunteers in fear of losing time. 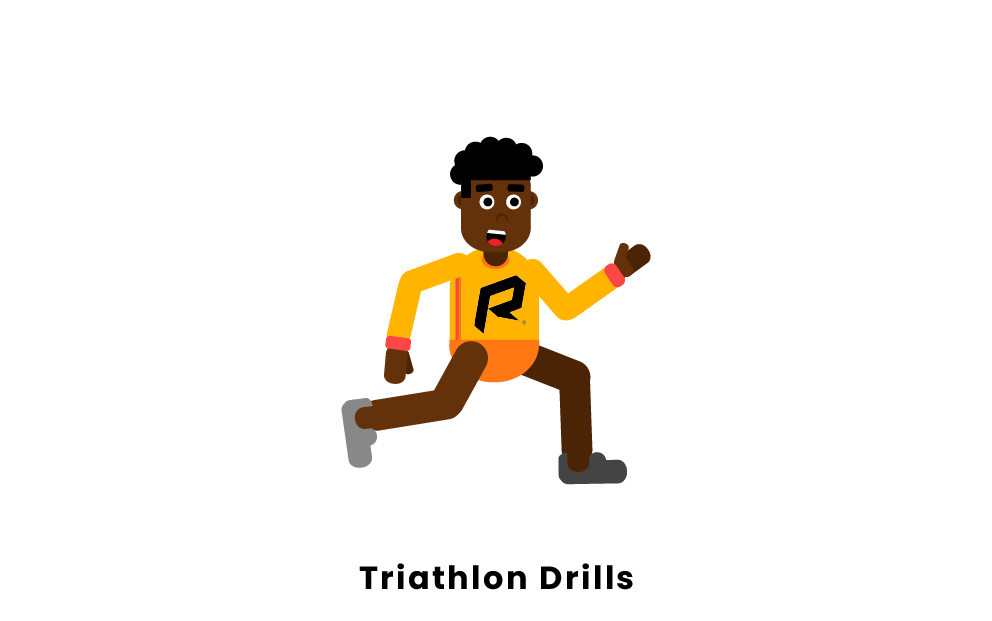 Training for triathlon can be a complicated process, especially for newcomers. Many casual athletes may not know proper running techniques, but that can be remedied very quickly compared to swimming, which may take much longer to perfect.

Here are some drills to help you nail down swimming fundamentals, as running and cycling can be trained through regular practice and pacing drills: 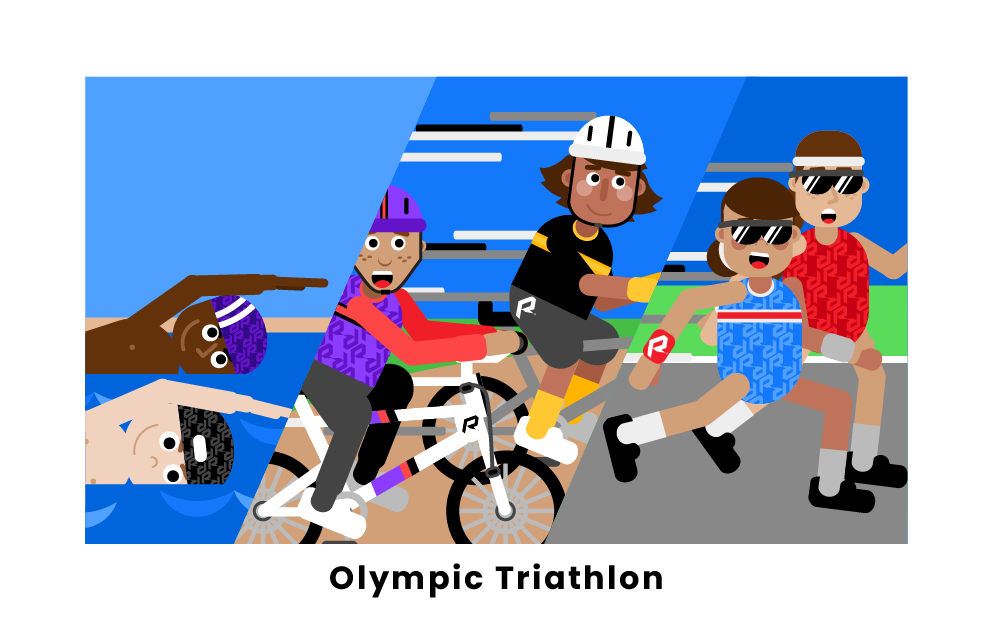 Triathlon made its debut at the Olympics during the 2000 Summer Olympics in Sydney, Australia. The event was governed by the International Triathlon Union and used the standard format for the distances of each segment, which is now referred to as 'standard/olympic distance.'

Triathlon has two different events, one for men and one for women. Men's and women's events are competed on the same track, just on different days. Canadian Simon Whitfield was the first ever triathlon gold medalist. 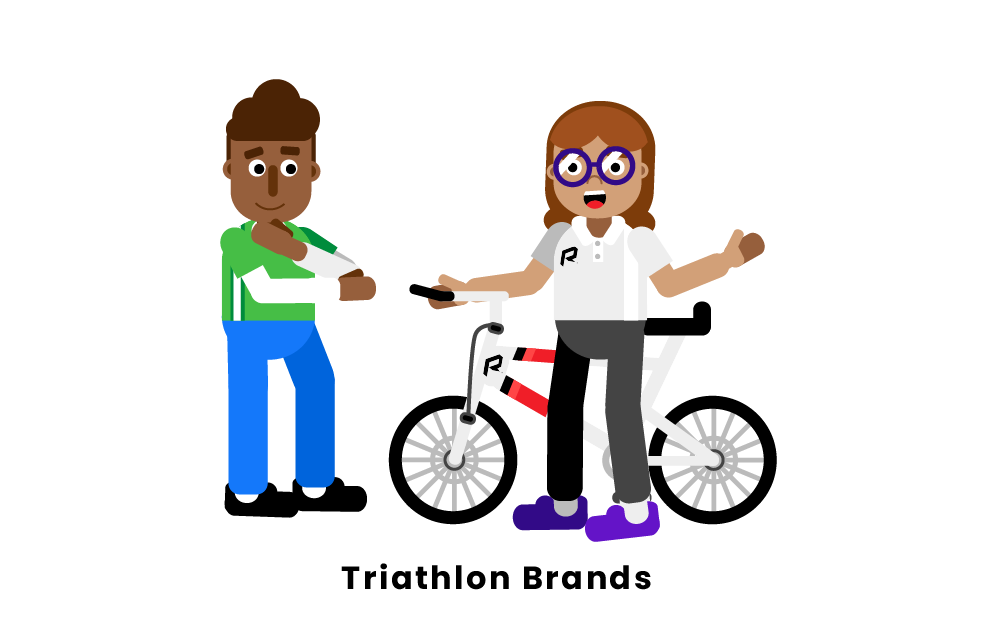 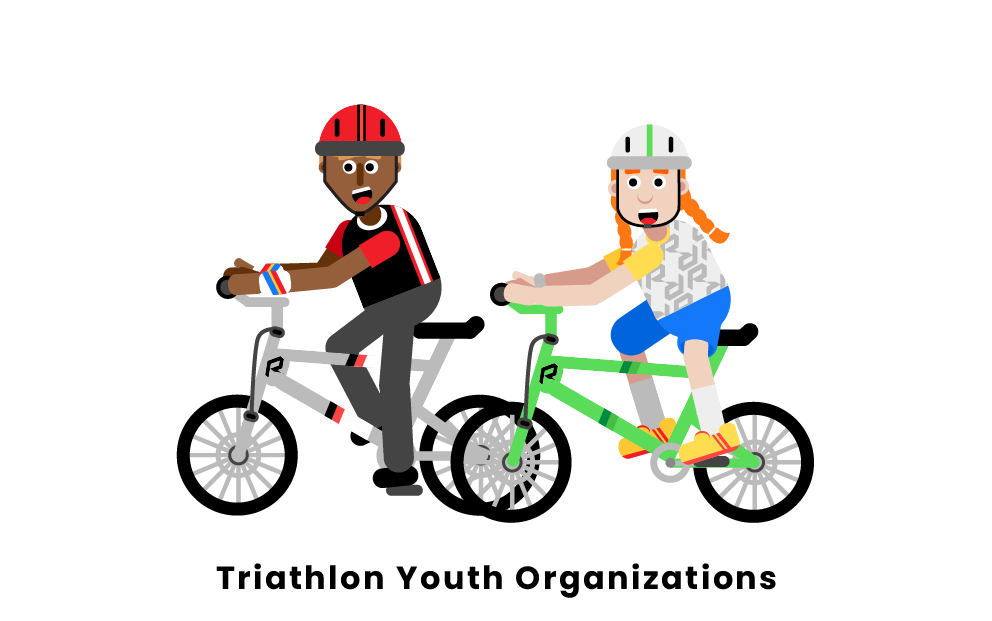 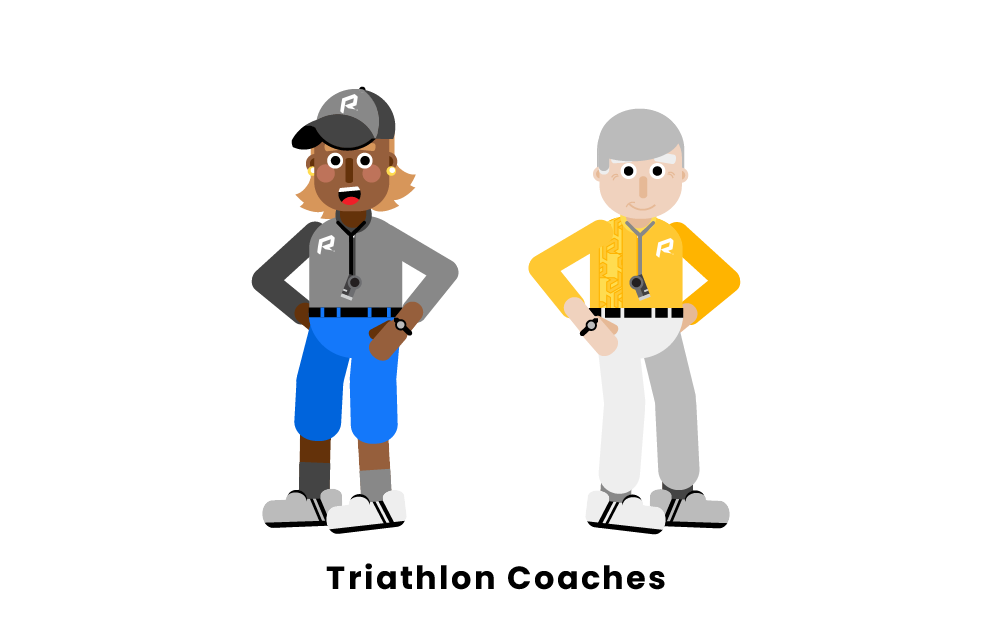 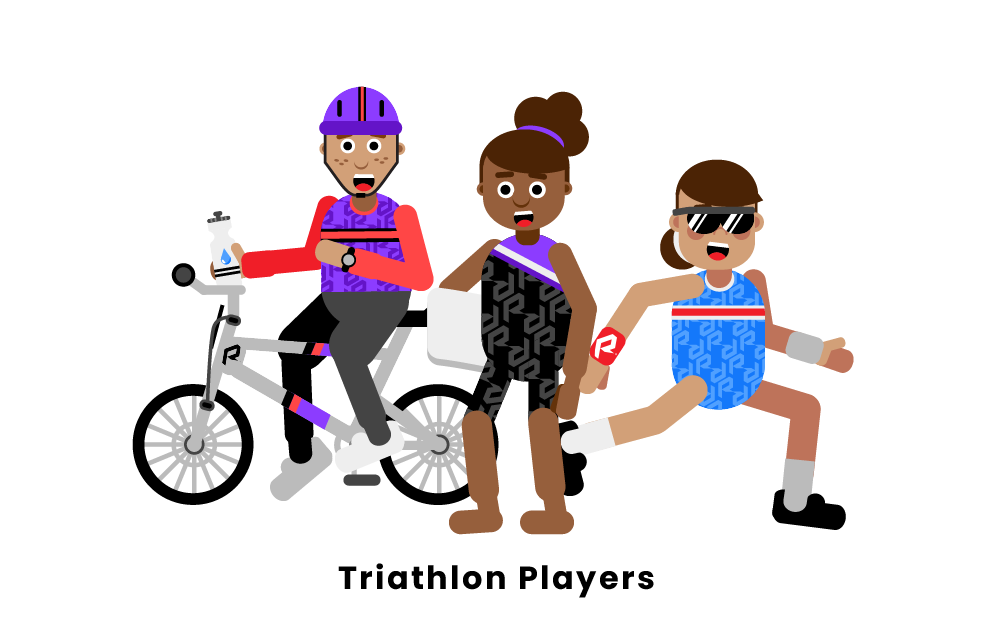 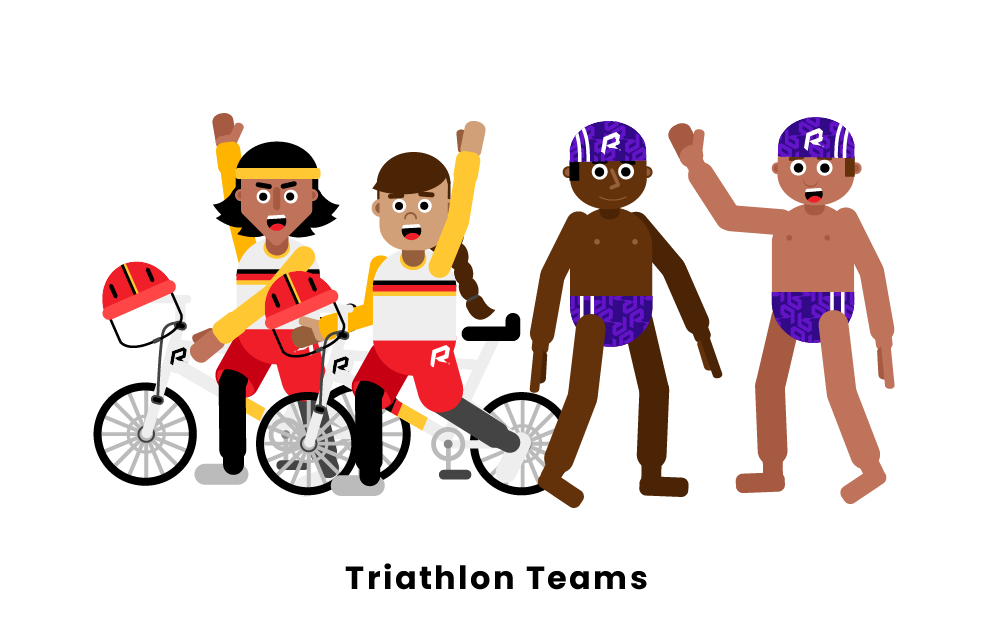 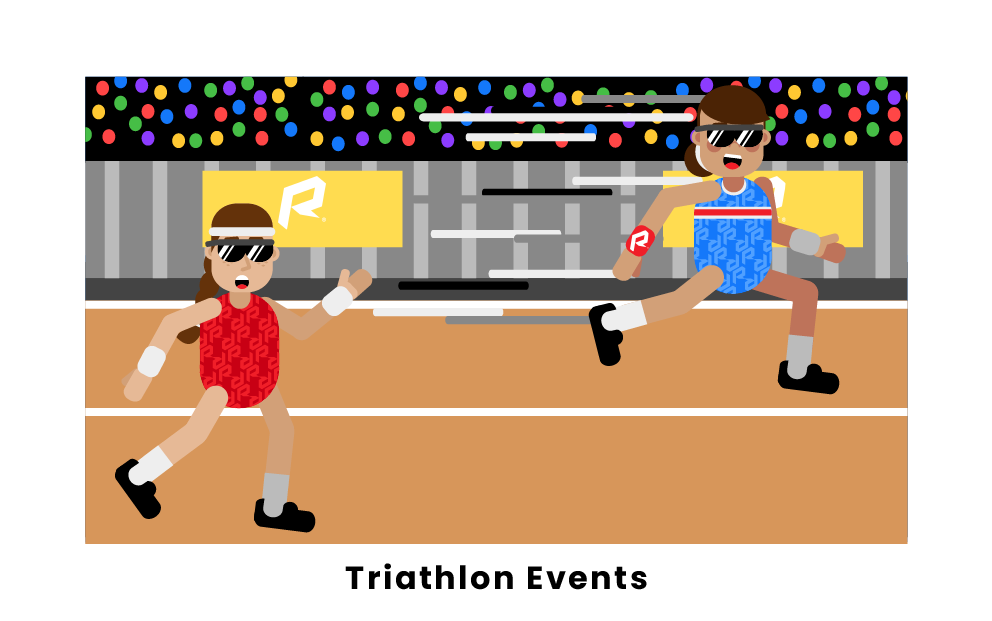 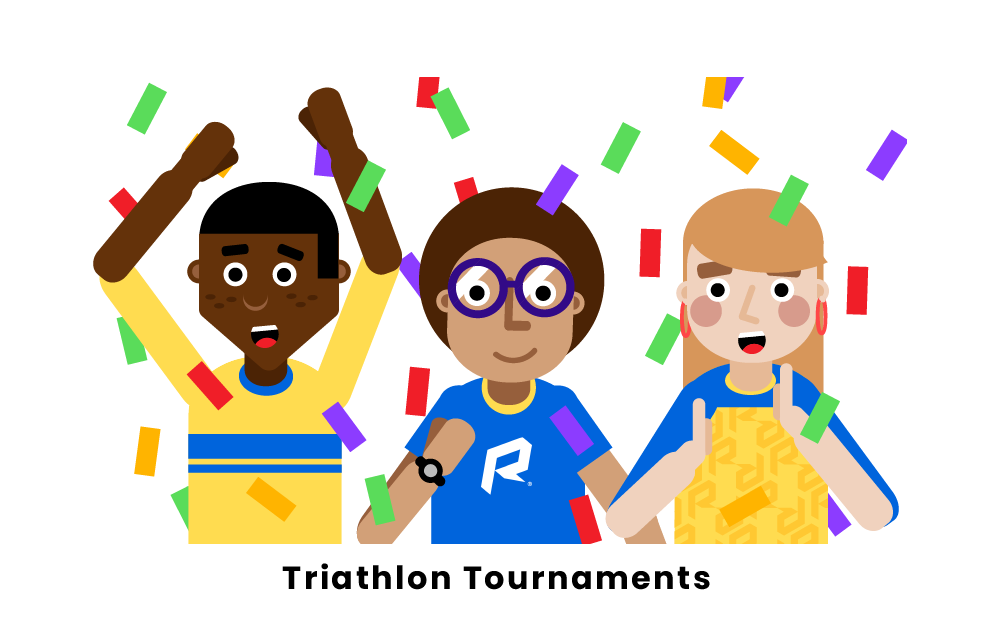 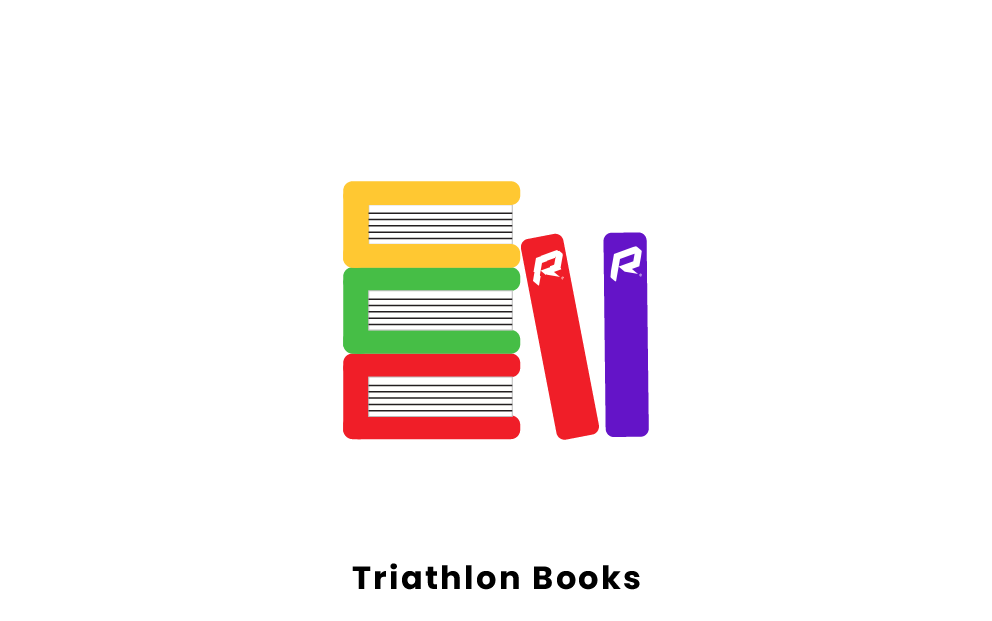 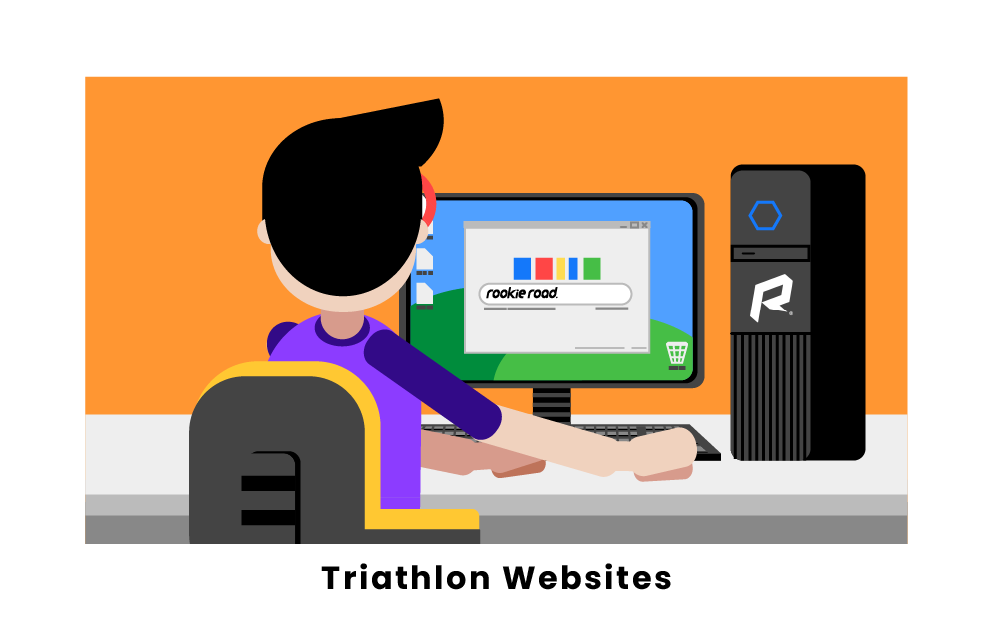 Triathlon is a three stage race that has competitors race by swimming, cycling, and running.

What are the types of triathlons?

There are a variety of different types of triathlons, but the standard triathlon consists of 1,500 meters of swimming, 40 kilometers of cycling, and 10 kilometers of running. Transition areas are set up in between different segments of the race for athletes to switch gear and prepare. Don't forget, transition time counts towards the full triathlon time. Another extremely popular form of triathlon called the Ironman, is only for the most physically and mentally fit athletes; it consists of a 3.8-kilometer swim, 180-kilometer bike, and 42-kilometer run.

Is Triathlon an olympic sport?

Yes! The triathlon has been an Olympic sport ever since the 2000 Summer Olympics.

What does it take to compete in a Triathlon?

Triathlon continues to be an extremely popular sport for amateurs and professionals alike. Completing a triathlon is no easy task, so many use it as a method for getting in shape and goal setting. Triathletes go through intense phases of training in order to prepare for triathlons, at times beginning training years before the race. They must be in peak physical shape, build endurance, and master transitioning between different parts of the race. Triathlon is an exciting way to test your endurance and train with some of the best athletes in the world.

What is the history of triathlon?

While the components of triathlon have been around for a long time, triathlon itself is relatively new. It's modern roots first began in the 1970s at the San Diego Track Club, who encouraged their athletes to practice all three sport disciplines in order to lessen the strain it had on their bodies while running track. Ever since, triathlon's popularity has spread its way quickly across the U.S. and worldwide. Triathlon made its first appearance in the Olympics in Sydney, Australia during the 2000 Olympic games.

Pages Related to What is Triathlon?