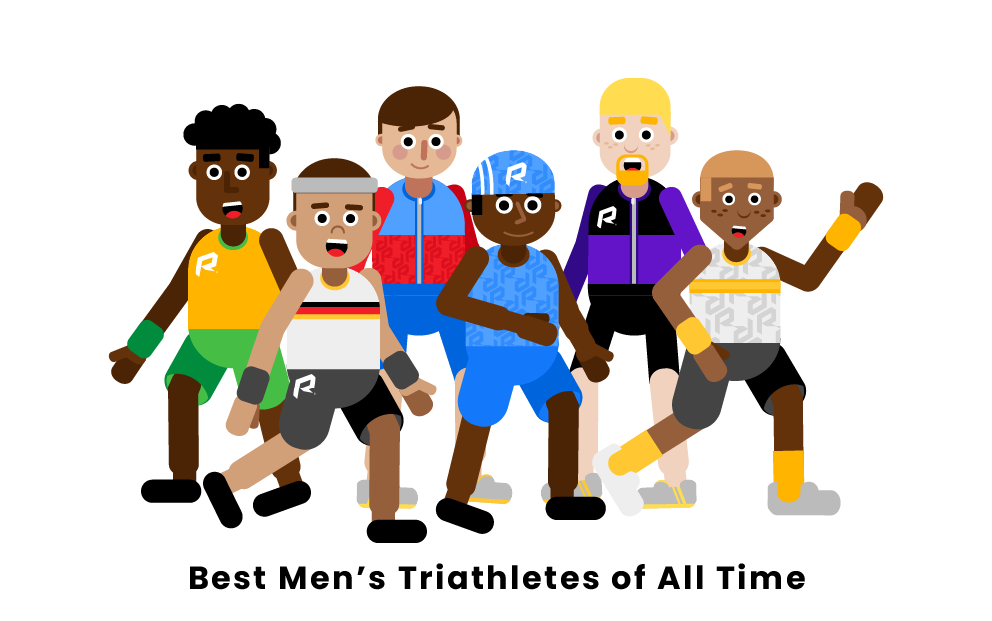 A triathlon is a true test of athletic ability and endurance, requiring athletes to perform three different sports, including swimming, running, and cycling. While many athletes may be talented at each of these individual sports, the best triathletes of all time can perform in all three at a high level.

Who are the best men’s triathletes of all time?

Mark Allen is considered to be the best triathlete of all time. Allen competed in his first triathlon, Ironman Hawaii, in October of 1982 but was unsuccessful at finishing the competition. He refused to give up and participated in the event again in 1984, where he finished in fifth place and improved even more in 1986 by finishing in second place. Allen developed a fierce rivalry with fellow triathlete legend Dave Scott throughout the years. Their most notable competition was the Ironman Hawaii in 1989, later known as the “Iron War,” where the two were neck and neck until Allen broke away at the 37km mark of the run and finished the marathon in 2:40 hours to beat Scott’s previous record by 20 minutes.

Jan Frodeno is another one of the best male triathletes of all time. Frodeno grew up in South Africa, where he swam competitively. He began to make a name for himself in the 2008 Summer Olympic Games in Beijing, where he pulled off a huge upset, taking home the gold medal in the triathlon ahead of fierce competitors including Simon Whitfield, Javier Gómez, and Bevan Docherty. After retiring from ITU racing in 2013, Frodeno pursued the Ironman World Championships. In his first World Championship competition in October 2014, he finished in third place, and the following year, he won the Ironman 70.3 World Championships in Austria. In 2016, he broke the iron-distance record at Challenge Roth with a finish time of 7:35:39, and in 2019, he broke the Kona course record with a finish time of 7:51.

One of the greatest rivals to Mark Allen, Dave Scott proved to be one of the best triathletes in history. Scott competed in his first triathlon, the Turkey Triathlon in San Francisco, in 1976, where he finished in second place. He participated in his first Ironman competition in 1980, where he dominated the race and became the first man to finish in under 10 hours with a time of 9:24:33. Scott’s Ironman success continued, as he won all five of the next competitions he competed in between 1981 and 1989. Although he was not victorious in the 1989 “Iron War” race in Kona, Scott battled with Mark Allen in one of the most memorable competitions of all time.

Javier Gomez is one of the most decorated triathletes of all time and is still building his resume today. Gomez began to dominate local junior competitions in Spain at only age 15 before an incident in 1999 with the Spanish government agency for sport, who detected a potential cardiac issue and took away his international race license. Gomez finally reclaimed his racing license seven years later, and his career took off. From 2006 to 2015, he competed in 97 ITU-sanctioned races, where he finished in the top ten 80 times, won 37 races, and made it to the podium 73 times. Throughout this time, he won the ITU World Championship title five times and three ETU European Championship gongs along with two Ironman 70.3 World Championships in 2014 and 2017.

Alistair Brownlee began competing at a young age, winning the 2006 ITU Junior World Championship at age 17 and breaking the course record in the 2007 Helvellyn Triathlon. After finishing in 12th place in the 2008 Olympic Games, Brownlee went on to win 15 out of 20 ITU races that he competed in, including two ITU World Championships and two European Championship titles. He returned to the Olympic Games in 2012, where he took the gold medal in a tight race with Javier Gomez. Four years later, Brownlee established himself as one of the greatest of all time by taking home the gold medal once again in the 2016 Olympic Games.

Peter Reid is one of the greatest triathletes to compete at Kona of all time. Reid experienced his first taste of a triathlon in 1989 and fell in love with the sport, going on to win the 1993 Astroman duathlon in Japan. In 1994, he competed for the first time in Hawaii and finished in fourth place, followed by another fourth-place finish at Kona in 1997. After he began training alongside star athlete Tim DeBoom, Reid began to dominate, winning the Ironman World Championship three times in 1998, 2000, and 2003. In 2002, he came in second place in the World Championship after a tough battle against DeBoom.

Who is the best men’s triathlete of all time?

What men’s triathlete has won the most Olympic gold medals?

What men’s triathlete has won the most Ironman World Championships of all time?

Pages Related to Top 6 Best Men's Triathletes of All Time