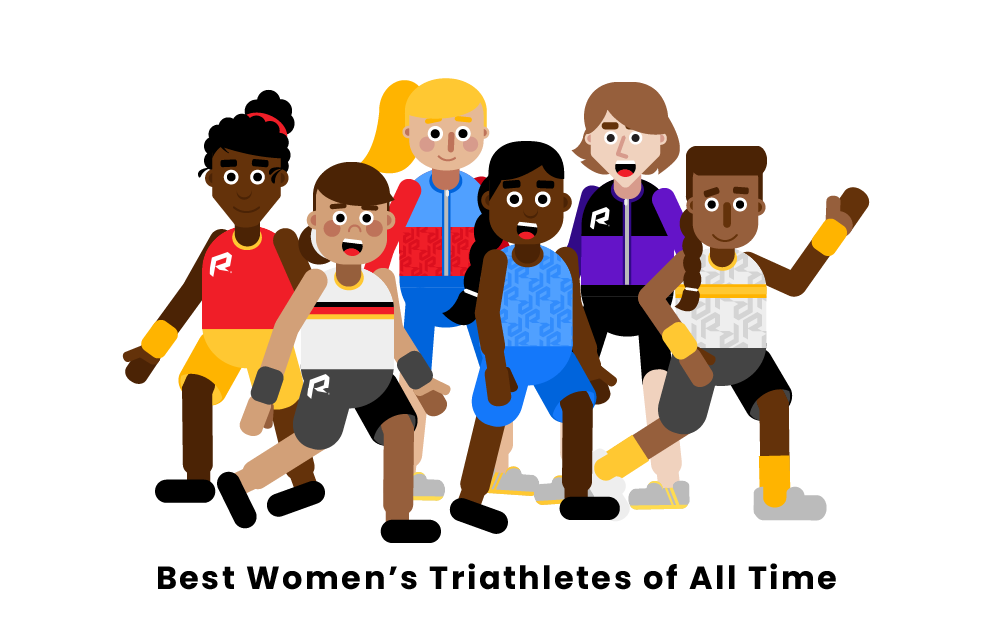 While the sport of women's triathlon has only been around for less than 50 years, it has produced some of the best female athletes on the planet. The sport began in 1974 in San Diego when the San Diego Track club held the inaugural Mission Bay Triathlon. Women's triathlon has helped move the needle when it comes to gender equality in all sports. Read on to learn about the top five women’s triathletes of all time.

One of the greatest female triathletes ever, Paula Newby-Fraser, has done it all in the sport during her illustrious 16-year career. Newby-Fraser is from Harare, Zimbabwe, where she was the youngest of two children. A natural swimmer, Newby-Fraser earned a national ranking in the sport when she was in high school. She took a break from competitive sports while in college, not training seriously for an extended period.

After graduating college in 1984, she attended her first triathlon as a spectator with her boyfriend at the time. Initially overwhelmed by the endurance required to even complete the event, with the encouragement of her partner, she began training to compete in a triathlon the following year. In her first-ever event, she won, setting a new women's record at the course she competed at and finished with a top-ten best time for men and women. Three months following her first race, she won the South American Triathlon, earning a trip to the World Championships in Hawaii.

Badmann’s infamous nickname, “Swiss Miss,” didn't come about for no reason. She would go on to dominate in the sport years after her first victory, winning the 2000, 2001, 2002, 2004, and 2005 Ironman World Championships as well. A serious fall in the 2007 World Championship would derail her career for a year, as she endured numerous operations during that time off. She competed in the sport for another nine years before she retired in 2016.

Gwen Jorgensen was a successful NCAA swimming and track and field athlete before her career as a triathlete. She began her professional triathlon journey in 2010. In her first season as a professional, Jorgensen won a silver medal at the World University Triathlon Championships in Spain, capturing the USA Triathlon Rookie of the Year and Elite Duathlete of the year awards in the process. In the remaining seven years of her triathlon career, Jorgenson won 25 events, had 37 podium finishes, two Triathlete of the Year awards, and one Olympic gold medal from Rio in 2016. In late 2017, Jorgensen transitioned into marathon running with the goal of winning a gold medal at the Summer Olympics.

Baker was born in Kaiapoi, New Zealand, in 1961. She began her career in 1989, competing in the inaugural International Triathlon Union (ITU) World Championship race. Although she was never officially coached by a trainer, she mainly self-trained, consistently pushing her body to its limits. That strategy seemed to pay dividends during her career, and in her first year as a professional, she won the ITU World Championship race. She also competed in the ITU World Cup Series and won three times during her career. She won two Ironman World Championships during her career, in 1987 and 1990. When her illustrious career was all said and done, Baker walked away with the 1980s’ “Triathlete of the Decade” title from the American magazine, Triathlete.

Who is the best women’s triathlete of all time?

Paula Newby-Fraser is highly regarded as the greatest female triathlete in history. Newby-Fraser’s 24 Ironman race wins over her 16-year career are simply legendary. She also won eight Ironman World Championships over the course of her illustrious career and the 1990 Sportswoman of the Year award. Her impact on the sport transcended her career, as she now coaches aspiring endurance athletes. Her career accomplishments and legacy make her the best triathlete of all time.

What women’s triathlete has won the most Olympic gold medals?

For each Olympics since 2000, there has been a new winner of the women’s triathlon event. This means that no female triathlete has won an Olympic gold medal more than once. Most recently, at the 2020 Summer Olympic Games, Flora Duffy won the triathlon by finishing the race in 1:55:36, beating silver medalist Georgia-Taylor-Brown by only 14 seconds.

What women’s triathlete has the most World Triathlon Series wins of all time?

Michellie Jones is the winningest woman triathlete in the World Triathlon Series history, with seven wins to her name. Jones also won two ITU Triathlon World Championships and an Olympic Silver Medal in Sydney 2000, which was the first time the event was held on the Olympic stage in the sport's history. All in all, Jones became one of the most consistent athletes in women's endurance running, with over 175 wins across Olympic, off-road, and long-distance events.

Pages Related to Top 5 Best Women's Triathletes of All Time