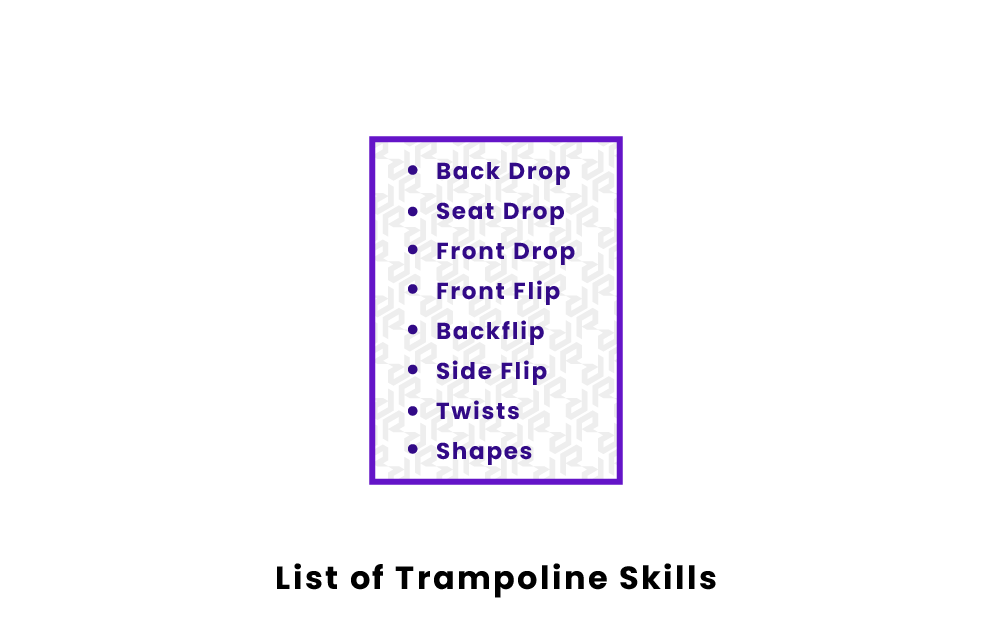 With every sport comes a multitude of different skills that help the player improve their own overall ability and performance in the sport. This applies to traditional sports such as soccer, basketball, football, baseball, etc. However, it also applies to less popular and more niche sports, such as trampolining. As an Olympic sport, one can be sure that trampolining comes with a list of skills ranging from beginner to advanced that are important for trampoliners to know.

A back drop is one of the most basic techniques when it comes to trampolining. This move is performed by jumping at a slanted angle and then rotating in the air to land on your back. To prevent injury, it helps to keep your chin close to your chest. The second part of this trick is the return to your original position by standing upright. This is performed by kicking your feet forward as you land on your back to direct the momentum back onto your feet.

A seat drop is similar to a back drop, and is another one of the most basic techniques in trampolining. The difference between a seat drop and a back drop is that the landing is seated on the bounce, instead of on your back. This technique is improved by keeping your legs straight out and parallel to the trampoline, with your hands at your sides in order to help push back up into an upright standing position.

A front drop is similar to both a back drop and a seat drop. As the name suggests, the difference is that instead of bouncing on your back or in a seated position, this move is performed by landing with your stomach and chest flat on the trampoline. Your arms should be stretched forward, parallel with the trampoline, which are then used to push back up into an upright standing position.

While a front flip may seem daunting, as far as trampoline skills go, it is still one of the more basic moves. A front flip is performed by jumping forward high into the air, while tucking your head down to your chest in order to rotate through the flip before landing on your feet.

Though a back flip may seem daunting, within the sport of trampolining, it is actually considered rather basic. The move requires a backwards jump, followed by tucking your legs up to your chest, in order to rotate backwards until you land on your feet.

A side flip is more difficult than any of the previous moves listed. It is similar to a front flip or back flip, and is done by doing a sideways rotation rather than rotating backwards or forwards. This is done by jumping to the right or left, tucking your chin and knees up to your chest, and rotating sideways.

Twists are spinning while in the air. A full-twist is when you perform a 360 degree rotation in the air. They can be done to an even more extreme degree, as the number of twists that can be pulled off in a single jump is up to the trampolinist's skill.