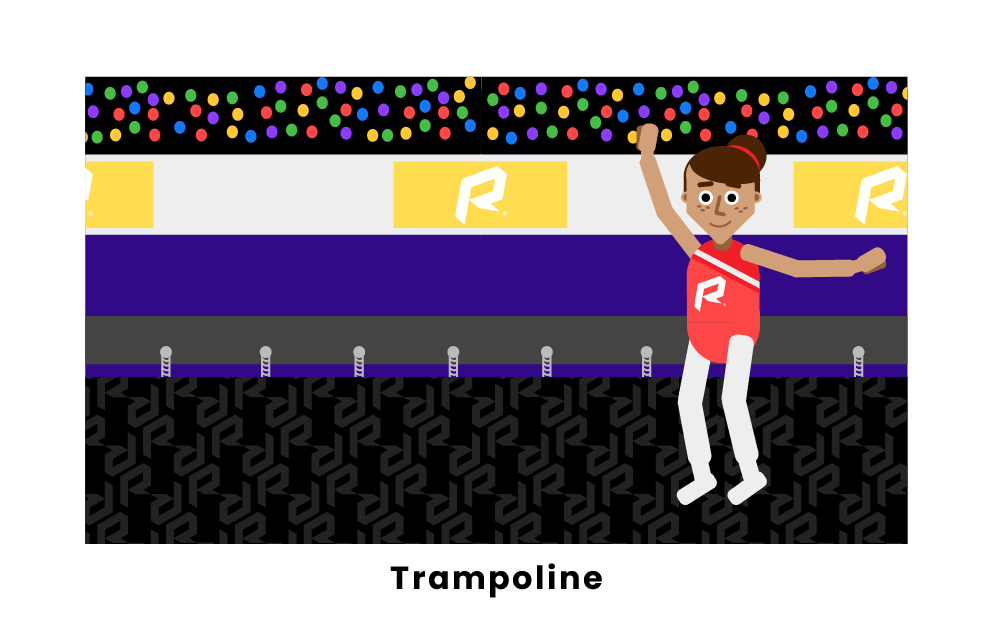 Trampolining is an Olympic sport where athletes perform acrobatics while bouncing up and down on a trampoline. It is a sport that requires sheer athleticism, and a lot of courage and determination. It is quite dangerous since they are performing extremely difficult tricks while very high in the air, which is what makes it exciting and thrilling for both the athletes and the fans.

Trampolining is both a recreational activity and an acrobatic sport where individuals need to perform skills when rebounding from the air and the trampoline. The trampoline is used as an acrobatic training tool and is also considered a competitive Olympic sport, so the levels of performance range greatly in this sport. Players perform this sport on a trampoline, which is essentially an elevated piece of strong elastic fabric that is stretched between a frame with coiled springs.

Trampoline and tumbling can be traced back all the way to ancient China, Egypt, and Persia. The trampoline was a method used to allow athletes to have more time in the air and perform different tricks. It was not until Geroge Nissen created the event in 1936 that it became a competitive sport. Between 1947 and 1964, trampoline was included as an event in gymnastics competitions by both the AAU and NCAA. The first ever Trampoline World Championships was in 1964, and it became recognized as a sport in the United States in 1967.

With the first modern trampoline developed in 1934 by George Nissen and Larry Griswold, they were intended to train astronauts, improve acrobatic skills and as a training tool in other sports. Soon after, many people started trampolining just for fun, and it began to become popular for recreational purposes, and then grew to be competitive. In the early 1960's, trampolining was finally considered a sport, but by 1977, it was finally included in the Olympic Games. 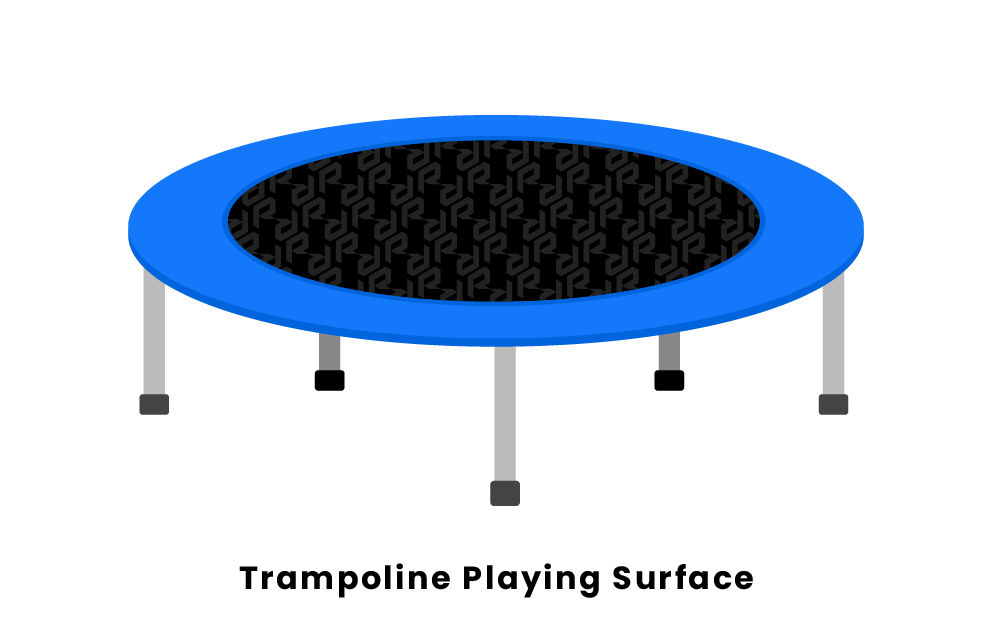 Outside of the trampoline itself, there is not much equipment that is needed when jumping on a trampoline. In a non competitive setting, boys can simply just wear shorts and a t-shirt that is comfortable and not too baggy. Girls will often wear a leotard or a unitard. In competition, girls wear a leotard that is either sleeveless or long sleeve, whereas boys wear a fitted, leotard style tank top and gymnastics pants or shorts. There are also team uniforms that have coordinating variations for boys and girls. There are some shoes that are designed for gymnastics, but a lot of gymnasts prefer to go barefoot. One last piece of equipment that is recommended for training is the safety mat. This is a big mattress-like object that is extremely soft that a coach can throw onto a trampoline when the gymnast is performing a new trick.

A typical trampoline event will start out with two qualifying rounds, with the highest scoring athletes over the two rounds advancing to the finals. There are ten consecutive maneuvers that take place in a routine, and scores are composed by adding a difficulty score, scores for execution, and total airtime. There are different events in professional trampolining. These include single trampolining and synchronized trampolining. In the synchronized event, there are two athletes who are performing the same exact skills at the exact same time. 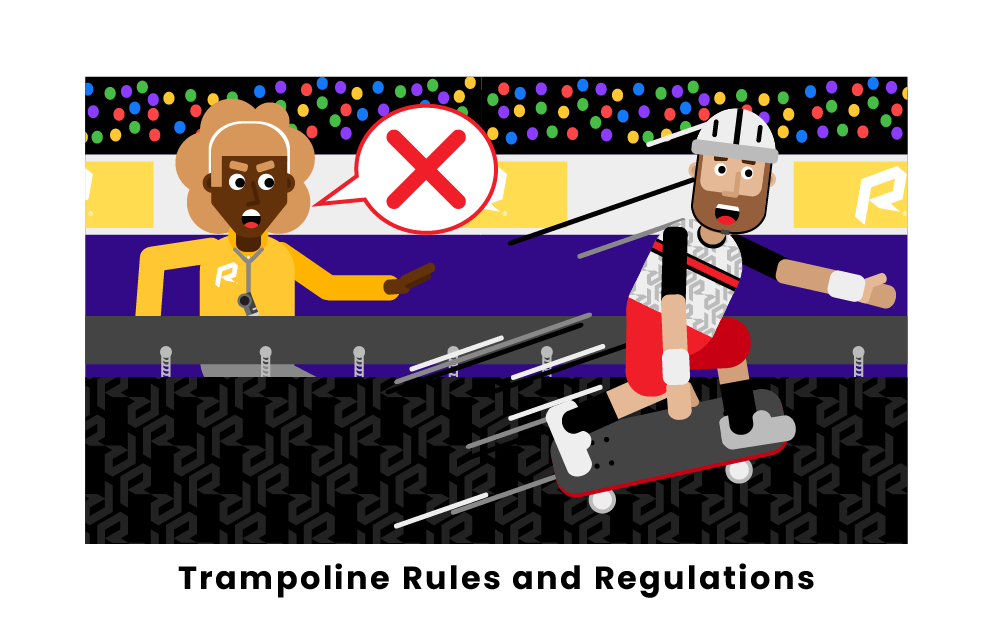 Like any sport, professional trampolining comes with a handful of rules to make sure that everything is fair and that all the athletes are safe. For example, every athlete is allowed to have spotters during an event. The spotter is there to protect the trampolinist from any accidental falls by the help of spotter mats. If the spotter makes contact with the athlete, then there will be no points awarded during that round. Along with that, there is a 0.3 deduction for every time the spotter verbally communicates with a player.

Judges are a very important part of a trampoline competition, as they are responsible for determining who the top performers are. They judge based on execution, degree of difficulty, and air time. For execution, there are five judges that each score the routine. The score will begin at 10, and judges will deduct for errors such as a break in form or an extra bounce. The difficulty score starts with 0.0 and increases with every skill performed. 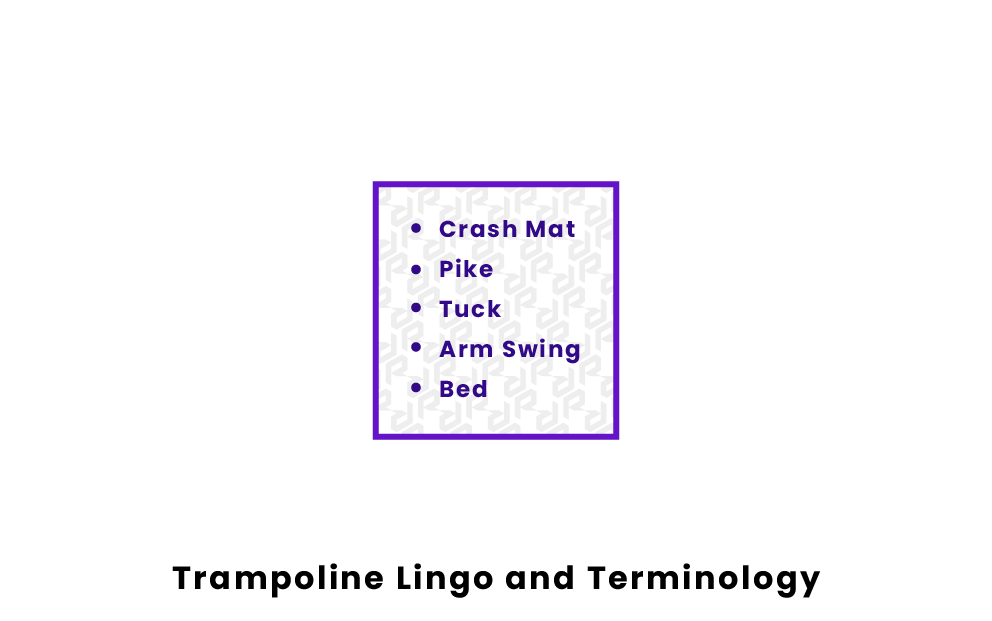 Trampoline is a sport that is full of different terms and lingo that is important to understand. Whether you are going to be watching the sport on TV or practicing at a camp, you should learn some of the below terms. 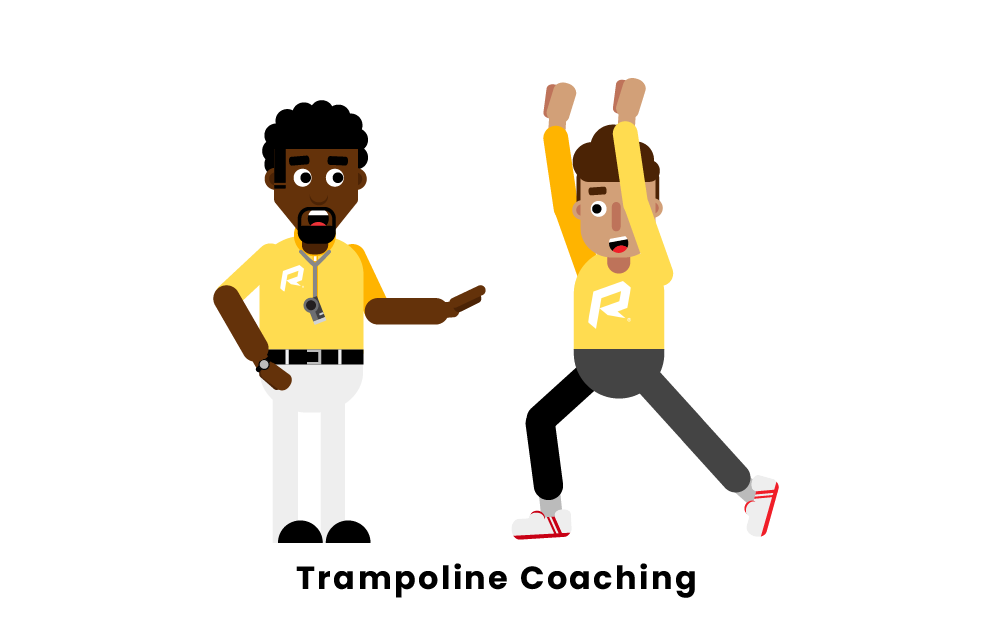 A coach is an extremely important part of an athletes success on the trampoline. Athletes on the trampoline are performing extremely difficult maneuvers while very high up in the air. Not only is it extremely hard to execute these maneuvers, but it can also be quite dangerous. The coach is there to make sure that not only that the athlete is executing their skills properly, but to also make sure that the trampolinist is staying safe. The coach will spot the athlete on new skills, and will assist in polishing the form once the athlete is able to perform the new skill. 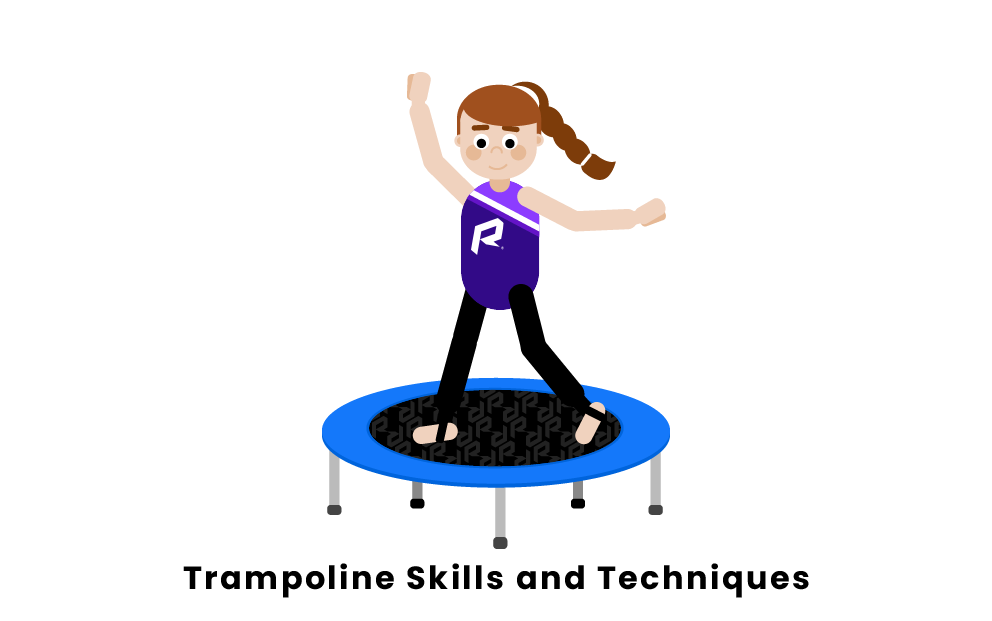 Performing these complex maneuvers in the air is something that does not come easy. A trampolinist requires great strength and athleticism. One quality that is pretty much a requirement for all trampolinists is a strong core. Performing these skills while staying in control requires you to squeeze your core as tight as possible to make it look as clean as possible. Along with that, these athletes need great lower body strength so they can get as high as possible on the trampoline. Finally, they also will need great air awareness. Being in the air for that long can lead to some mistakes when performing skills. It is important for a gymnast to be able to recover.

For these Olympic athletes, jumping on the trampoline is far more than just jumping up and down. The routine is not complete until they perform all ten jumps, so the athletes need to strategize on how they can balance their endurance so they do not get out of breath in the middle of the set. These athletes need to strategize how their routines need to look. There are a variety of different things they need to focus on such as airtime, form, and degree of difficulty. The coaches and athletes will work together to determine how they can best balance those elements into the best routine possible. 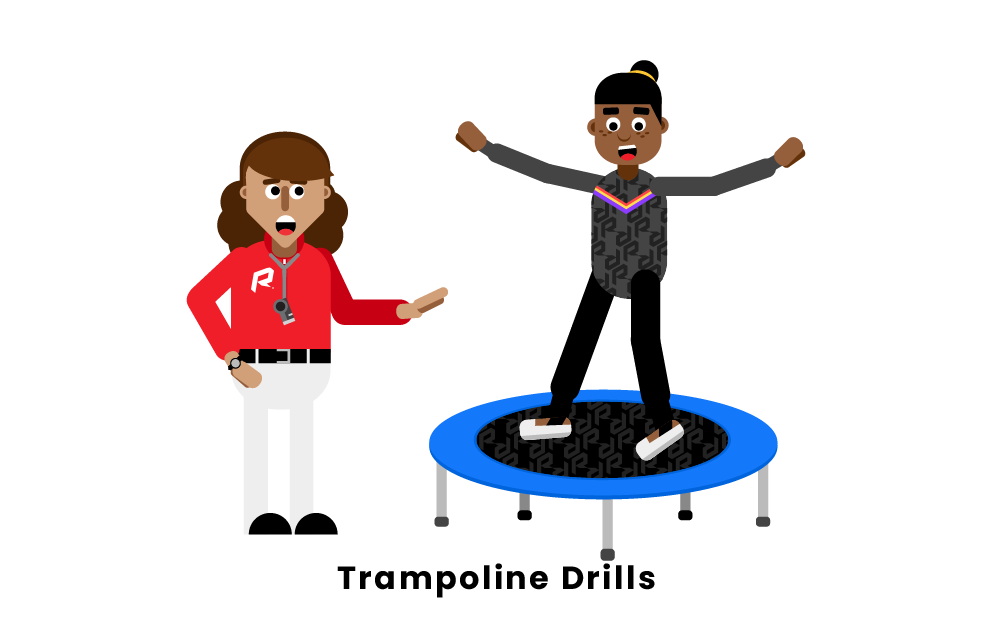 Like any sport, trampoline requires a lot of drills that will allow the athlete to be successful in the long term. There are a lot of tumbling progressions that an athlete can do when they are working on learning a new trick. This is a safe way for the athlete to improve their skills as they look to progress their abilities. Along with that, simply practicing straight jumps, tuck jumps, pike jumps, and straddle jumps will be extremely helpful to help the athlete improve. Seat landings and back landings are when you land safely on your back or butt all while in control going back to your feet. This is a great drill to help improve your balance and ability.

Trampoline made its debut in the 2000 Olympics in Sydney, Australia. It has two events, the men's and women's competitions. Among both genders, China typically finds the most success, especially in recent games. Karen Cockburn is the most decorated Olympic trampolinist, having taken home two silver medals and a bronze medal.

All over the country, you can find youth organizations to learn the basic fundamentals of tumbling and acrobatics. Trampolining is an incredible sport that many kids loved to get involved in. However, if unsupervised, it can be extremely dangerous. It is extremely important that children are practicing new maneuvers with a qualified coach helping them out. This will keep them safe, all while they can improve their potential and have as much fun as possible.

The International Gymnastics Federation (FIG) is the organizing body for international gymnastics competitions, including the Olympics. The FIG will make rules, train and certify judges, and determine how competitions are run. This organization also runs all gymnastics events, and has been around since 1896, making them the oldest international federation.

There is also the National Collegiate Acrobatics & Tumbling Association, which brings trampolining into the NCAA. They hope to make the sport of trampolining a fully sanctioned NCAA sport. 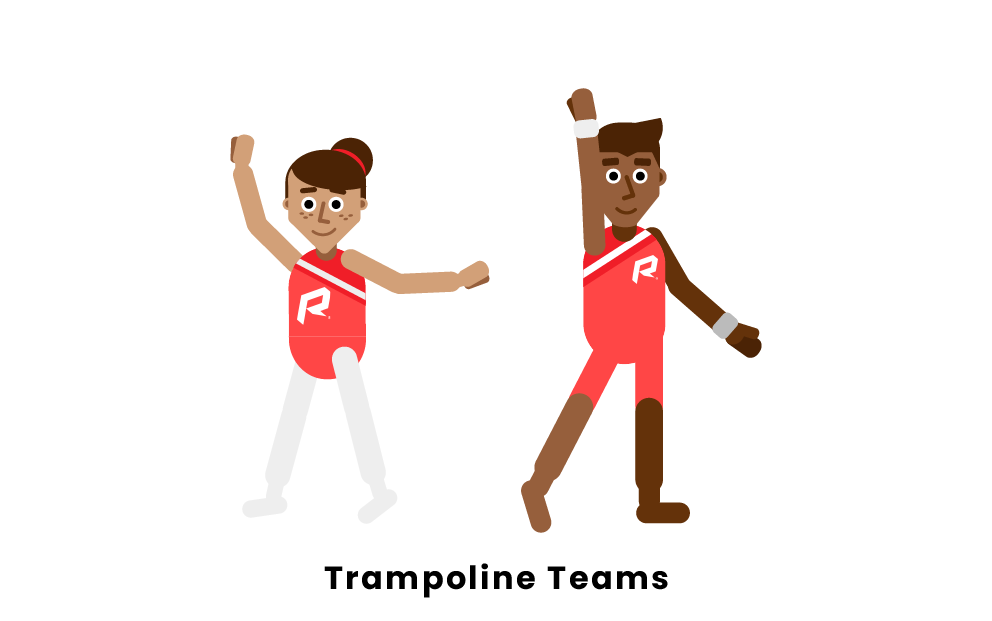 Trampolining is an individual sport, outside of the synchronized event. Therefore, there is not much "teamwork" that goes on during these events as it is typically everyman for themself. However, it is common for athletes to be based out of the same gym or college where they would have the same coach. In the level before making the national team, an athlete will likely train at his or her local gym, where he or she will be a part of a club in which they would all have the same coach. However, the coach is focused on improving the skills of each individual athlete, not necessarily the team as a whole.

There are many different types of trampoline events that someone can attend. There are many gyms that have open gyms at least once a week where kids can go jump on the trampolines and do just about whatever they want. Other events that are a great idea to attend are tournaments. At these tournaments fans can watch the top trampolinists in the world perform to the highest level possible.

All over the world, there are elite level tournaments that attract the top performers from different countries. These events are run by the International Gymnastics Federation, and are typically held annually in different cities. Below are some of the tournaments that take place every year. 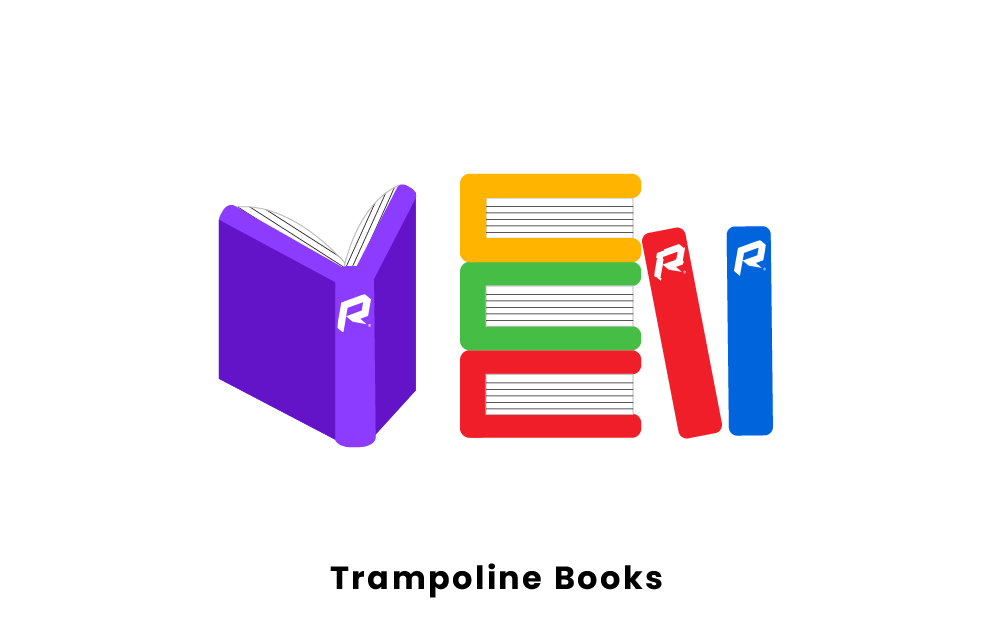 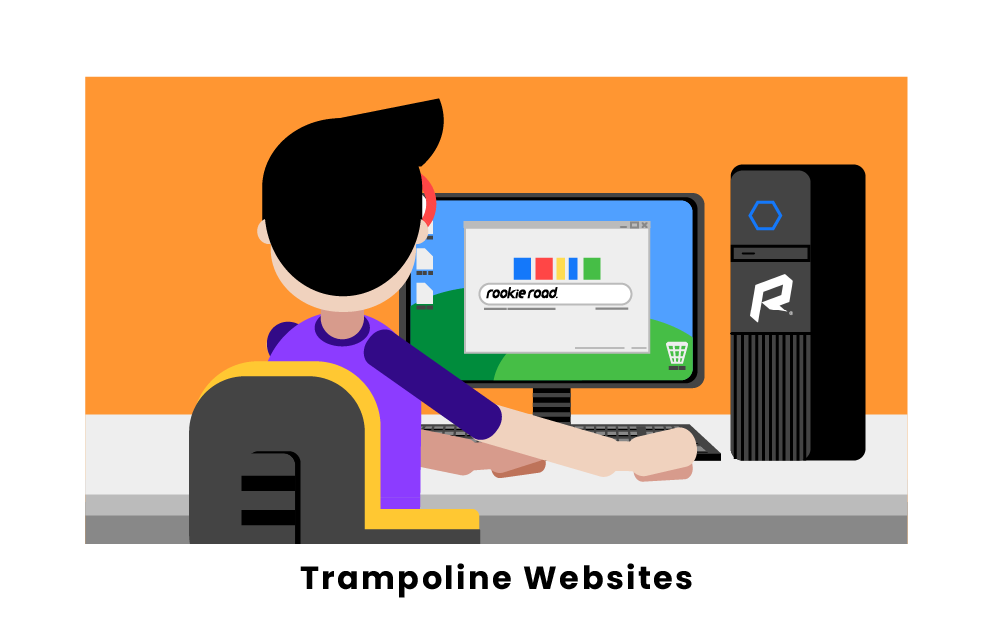 Whether you want to watch videos, check out results, or learn about certain techniques and methods, the internet can be one of the best places to gather this kind of information. Below is a list of some of the most useful websites for people who want to learn more about the sport of trampolining.

Trampolining is the act of bouncing up and down on a trampoline while performing various flips and twists.

Where is Trampoline popular?

Trampolining is extremely popular all over the world. In countries such as Canada, the United States, and Australia it is very common for families to have a trampoline in their backyard. At the competitive level, it is also a very popular sport in China, as they have found the most success by far in the Olympics.

Is Trampoline an olympic sport?

Trampoline appeared for the first time in the 2000 Olympic Games in Sydney. There was both a men's competition and a women's competition including both compulsory and voluntary events. In compulsory events, athletes perform a pre-choreographed routine on the trampoline and are judged by their ability to complete each skill in order and with good form. In the voluntary event, athletes are allowed to make up their routine as they go, being scored on the difficulty of skills and how well they execute them, and how long they are in the air directly above the trampoline. Judges score overall on difficulty, execution, and flight time for both events.

Who are the top trampoline athletes?

Since its implementation in the 2000 Olympic Games, China has shown to be a strong force in the world of trampoline. They have won eleven medals, leading high above any other nation. However, in 2012, Canadian athlete Rosannagh MacLennan won gold, out-performing two Chinese athletes to do so. In the upcoming Olympics, athletes are expected to be performing harder and more complex skills, with the common expectation that China will still be a strong competitor.