What are the rules of sprinting? 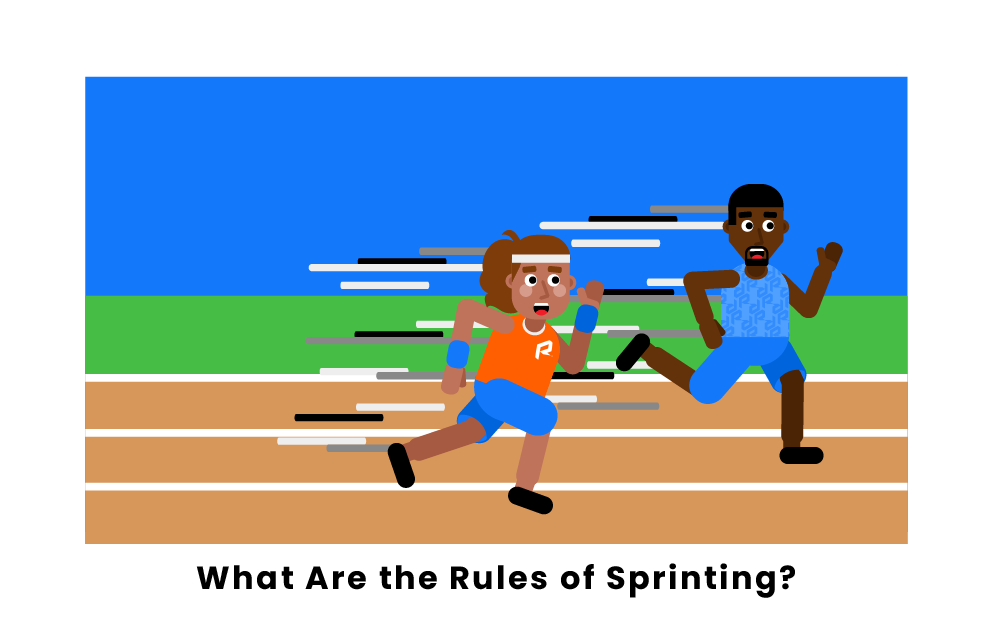 Track events in track and field have various distances that the runner must run in order to complete their respective race. There are three categories of distances in track races, with the shortest races being sprints, followed by middle-distance and long-distance races. Typically, any race that is 400 meters or shorter is considered a sprint, while anything between 800 and 1600 meters is a middle-distance race. By this definition, any race where the runner must run one complete lap or shorter is considered a sprint, and the rules of these races are different from longer-distance or relay races.

Regardless of the race, solo track races have certain rules that each runner must follow. For instance, in any race, each runner must start behind the starting line and must not make any movement from the time they get set until the starting gun fires, or else they likely face disqualification. In any race, it is illegal to obstruct any other runner in any way, and the obstructing runner likely faces disqualification as well. However, sprints are unique because runners in sprints are not allowed to leave their lane at any time because this could create an unfair advantage for some runners because of the short distance of the race. In most instances, if a runner steps on the white lines on either side of their lane, they will be deemed to have exited their lane, and the runner will be disqualified or penalized if caught.

In order to create equity, some sprints have runners start in staggered positions on the track so that each runner runs the same distance by the end of the race. In each race, sprinters run the same distance to the finish line, and the finish line is typically marked by a horizontal line on the track across each of the lanes or a ribbon or piece of tape. Regardless of the distance, the finish line is always in the same place, and the starting line differs by race in order to complete the appropriate distance to the finish line. In many instances, sprinters are required to use starting blocks, and the blocks must be far enough behind the starting line for the runner to have his entire body, including all of their fingers, to be behind the starting line before the start of the race. The governing body for track and field events on the world stage, World Athletics, has set rules for sprint races regarding the track. For instance, World Athletics has stated in their official rulebook that sprints must be run on a track made of material that allows for runners to wear spiked cleats.

There can be any number of distances for sprint races, but in the Olympics, the sprints are 100, 200, and 400 meters. One lap around the track is 400 meters, so each sprint race is at most one full lap. Typically, the 200 and 400-meter sprints incorporate staggered starts since each runner must stay in their lane, and each race utilizes at least one 100-meter curve in the track. In staggered starts, each runner runs the same distance from start to finish, but there is an illusion that the runner in the outermost lane runs the least distance. This creates a false lead for the runner in the outermost lane and often causes that runner a disadvantage since they are unaware of the speed of the competition until the final 100-meter straightaway. The runners in the middle lanes typically have a slight advantage because they do not have to make any sharp turns during the race and are not given a false lead at the beginning of the race. The 200 and 400-meter races also must utilize a little bit of strategy for each runner since most runners can not sprint at their fastest speed for the full distance, and they must know how to pace themselves in order to run their optimal time and not wear themselves out before the finish line.

The 100-meter sprint differs from the 200 and 400-meter dash because there is no staggered start, and the runners only run on one straight away and do not have to worry about any of the curves of the track. Each runner starts next to each other in their own designated lane, and each runner must utilize a starting block. False starts are relatively frequent in these races because of the short distance of the race. The start is imperative for each runner because there is not much space on the straightaway to make up for a bad start, and each runner tries to time the starting pistol to the best of their abilities. This creates false starts, as the runner mistimes the gun and starts before the pistol has been shot. In most races, a runner only gets one false start, and they are disqualified, but in other races, the runner gets a warning after their first false start and a disqualification after their second. While there are differences in the rules for different distances of sprint races, each race is similar in that it tests the maximum speed of each runner, but the runner must know how to pace themselves and start off the starting blocks appropriately to ensure success.

Differences between Sprints and Longer Distances

By definition, any race that is completed in a lap or shorter is considered a sprint, while anything longer than that is a middle distance or long distance race. One of the main differences between sprints and longer distance races is that the runner is not allowed to leave their lane in sprints, but runners can typically leave their lane at a certain point in distance races. In each race, runners are designated certain lanes at the beginning. Typically, middle-distance runners will start using starting blocks just like sprinters do, but the starting blocks are usually abandoned once races get into the long-distance range. There are also usually more competitors in a single race for longer-distance races than sprints because there is more separation created between the competitors during the race when the runners must run more than one lap.

In sprint races, runners must stick to their assigned lanes and can not change lanes because this would create an unfair advantage due to the short distance of the race. In most cases, even stepping on the white lines on the outside of each lane is considered an infraction, and the runner can be disqualified if the judge catches the act. This is different from long-distance races, where runners are typically allowed to change lanes for strategic purposes.

How does the start of a sprint race work?

In every track event, the start of the race is marked by the firing of the starting pistol. However, the starting formation depends on the distance of the sprint. In 100-meter sprints, each runner is lined up next to each other in their own lanes, but the 200 and 400-meter sprints require staggered starts that allow for technical fairness as each runner runs the same distance despite the illusion that those in the outer lanes run a shorter distance.

Pages Related to What are the rules of sprinting?