What are the Rules of Relay Races? 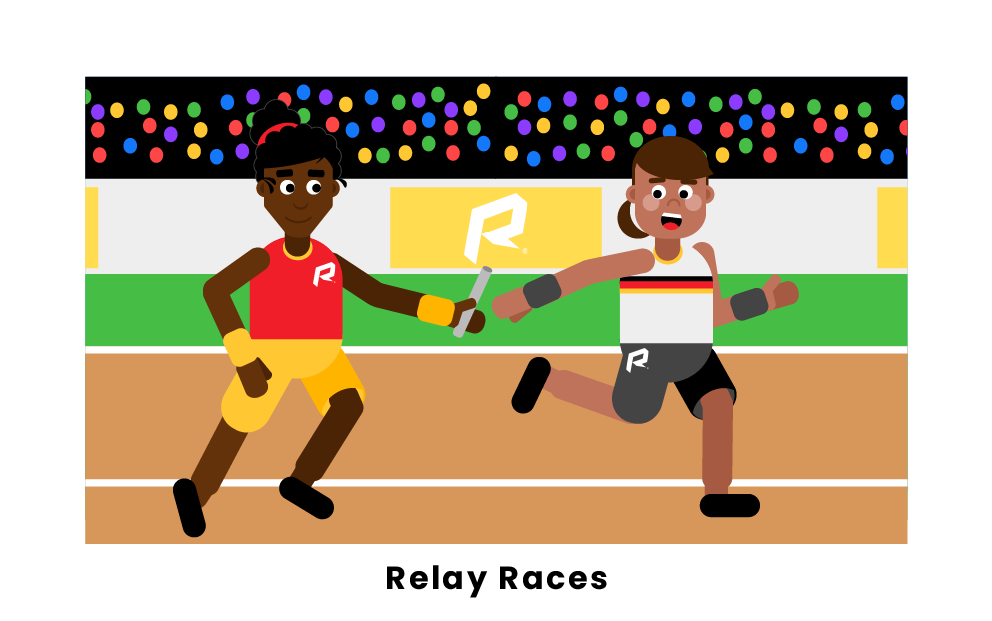 Relay races are one of the more complicated track events, because there are typically four runners competing with each other, as opposed to other races, where each runner competes on their own. There are many different types of relay races, but each race involves the same equipment and the same general rules in regards to disqualifications and moving from one runner to another.

In every relay race, there are four runners on a team who are usually responsible for running equal distances as one another. The most common distances for relay races are 100 meters and 400 meters, but there are also races of 50 meters, 200 meters, and 800 meters. There are other variations of the relay race, such as sprint medleys, long-distance, and cross-country relays. In sprint medleys, each runner runs progressively longer distances than the runner before them. For example, if the first runner in a medley runs 200 meters, then the next runner will run 400 meters, followed by an 800-meter runner, and the final runner will run 1600 meters. On a regulation track, one lap is equal to 400 meters, so in a sprint medley, the first runner will run half a lap, while the final runner runs four laps.

Long-distance relays are unique in that they are not run on a track, but instead on a road course, and the runners who are not actively running drive to the point where they will receive an exchange and begin running. These relays typically last for around 24 hours or so, and cover a distance of around 200 miles, with each runner running around three to seven miles in one leg. Unlike track relay events, runners in long-distance relays typically run more than one leg in a single race.

Track relays are in the Summer Olympics every four years, and many high school and college track events involve relay races. The name of the relay is denoted by how many runners participate in the race, times how long each runner must run. For example, in a race with four runners that run 400 meters each, the race will be called a 4x400m relay. In every relay race, each runner must carry a baton while running. The final runner on each team is called the anchor, and they are usually the most critical runner on the team, because they finish the race. If a team builds a big lead through their first three runners, then the anchor is responsible for running well enough to hold that lead and continue to run ahead of the anchors for all the other teams.

Relay races are unique because they are the only track event where each runner is responsible for carrying a baton with them while they run. The baton is a hollow cylinder that is typically made of metal and can fit in the closed fist of the runners. If a runner drops the baton, either while they run or during the exchange from one runner to another, then their entire team is disqualified and will not place in that race. The baton is most commonly dropped during the exchange from one runner to another, and the baton exchange must be practiced by each team in order to avoid disqualification and to ensure efficiency during the exchange. Slippery conditions such as rain or high humidity can also cause a runner to drop the baton while they are running. There is a certain distance within which each team must complete the exchange. This area is referred to as the changeover zone, and is usually 20 meters long in both 4x100m and 4x400m races. If a team completes an exchange of the baton outside of the changeover zone, then the entire team is disqualified, just as if they dropped the baton.

Strategically, the baton exchange must occur efficiently and correctly in order for the team to ensure success in the race. The strategy for how a team goes about an exchange varies depending on the distance of the race. For example, in a 4x100m race, each team typically passes the baton from one runner to another while the receiver of the baton is looking straight ahead and running quickly. In this case, it is the responsibility of the passer to place the baton directly in the hand of the receiver within the 20-meter changeover zone. However, in 4x400m races, the receiver usually has enough time to look back at the passer while running, so it is more likely that the exchange will be successful. In any exchange, the receiver is typically running close to full speed in the changeover zone, and the passer must maintain that pace until they have successfully completed the transfer. Typically, the receiver of the exchange will extend their arm straight behind them during the relay while the passer hands off the baton using the opposite hand. If the receiver extends their left arm during the exchange, then the passer will pass the baton with their right hand.

As mentioned earlier, a team is disqualified if they drop the baton or exchange the baton outside of the 20-meter exchange zone. Each of these disqualifications is unique to relay events in track, since there is no baton or changeover zone in solo races. However, there are other ways in which a team can be disqualified in a relay race that can also occur in solo track events. Just like in solo track races, runners in relay races can be disqualified for a false start. A false start occurs when a runner moves in such a way that could give them an unfair advantage before the race has officially begun. This can include an inadvertent twitch or flinch on the starting line before the starting pistol has been shot. In some races, you can be disqualified after only one false start. However, other races are more lenient, and allow one or two opportunities for a runner after a false start. In relay races, only the first runner can be called for a false start, since they begin running once the starting pistol has been fired, and all the other runners begin once they receive the baton.

Disqualifications can also occur if a runner steps outside of his designated lane, whether or not that impedes another runner in the race. Lane rules vary depending on the distance of the race. In short distance races, such as a 4x100m race, each of the four runners on a team must stay in their designated lane throughout the entire race, or else they will be disqualified. However, in the 4x400m and longer distance events, the first runner must stay in their designated lane, but each runner thereafter can choose which lane they want to run in. In these races, runners often choose to run in the innermost lane, since that allows them to complete their leg in the shortest distance possible. In any race, a runner can be disqualified for running outside the boundaries of the track in general.

How does a relay team exchange from one runner to another?

In order to exchange from one runner to another, a team must pass a baton from runner to runner. This baton is a cylindrical object typically made of metal that each runner must hold onto and not drop in order to avoid disqualification. Each exchange must occur within a 20-meter changeover zone in order for the team to avoid disqualification as well. On average, a baton is about one foot in length and an inch-and-a-half in diameter, and can fit in the closed fist of the runner.

Can a runner change lanes in a relay race?

Pages Related to What are the Rules of Relay Races?