What are the rules of middle distance? 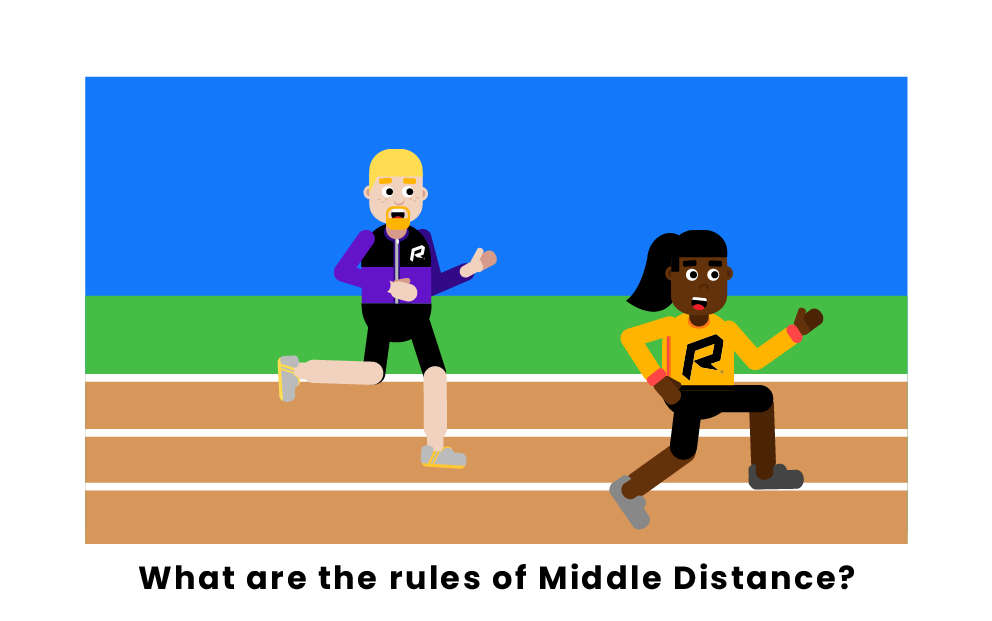 What are Some of the Basic Rules of Middle Distance Events?

Due to the varying length of events, there are different rules for different races in this track and field category.

400 meter: Runners stagger their starting position and must stay in their lane for the entire race. If a runner leaves their lane or makes contact with another competitor, they are disqualified.

800 meter: Runners have staggered starting positions and start in assigned lanes like the 400 meter run. The difference is they are only required to stay in those lanes through one turn of the track. At that point, they can move to the inside lane and battle for the best position. Just like the 400 meter run, if a runner makes significant contact with another runner, they are disqualified.

1500 meter: There are no staggered starts and no required lanes to start in. Runners can immediately head to the inside lane and jockey for the best position as soon as the race begins. The contact with another runner rule is the same, however.

400 meter hurdles: The race has the same rules as the regular 400 meter race. The only difference is there are hurdles at various points on the track that runners must jump over while running the race. If a hurdler makes contact with one of the hurdles, they can continue running if they are not injured and able to do so. There is no disqualification for making contact with a hurdle.

4x400 meter: Each team member runs 400 meters consecutively, passing a baton off to the next team member when they finish their run. There is a certain “hand-off zone” that the baton must be passed off within for it to be legal. As for running in a lane, the first competitor must stay in their lane for their entire 400 meter run. Once the baton is passed off to the second runner, they must stay in their lane for the first 100 meters, then they may cut to the inside, and each subsequent runner does not have to worry about staying in a lane.

How Does Scoring Work in Middle Distance Events?

As with any track event, the winner of each race is the first competitor (or team in the case of the 4x400 relay) to cross the finish line. Sometimes, a particular race will have multiple heats, meaning that there are too many competitors in the event to run them all in just one race. In that case, the same race will be run multiple times, and the person/team with the fastest time at the end of all of the heats will be the winner. From a team perspective, different points are awarded to teams when their team member(s) come in various places in middle distance races, just as they are in any track and field event. At major team events such as the NCAA Division I track and field meet, the top eight finishers in each race score points for their team. At this NCAA meet, currently a 10-8-6-5-4-3-2-1 scoring system is used, meaning first place is ten points, second is eight points, and so on down to eighth place being worth one point.

What Equipment is Needed in Middle Distance Events?

Unlike some other sports, there is not a lot of equipment required for middle distance races or any track event. Athletes should have a good pair of running shoes, running shorts, and a team jersey.

Each of the three aforementioned track groups (sprint, middle distance, long distance) have different running shoes that are best suited for their particular races. These shoes have spikes on the bottom to allow runners to best grip the track while they race and train. Some organizations, such as the International Association of Athletics Federations (IAAF) and the U.S.A. Track and Field (USATF), mandate how long spikes can be. For IAAF events, spikes cannot be longer than nine millimeters, while USATF says spikes cannot exceed twenty-five millimeters.

The other piece of equipment that is needed for some of the shorter middle distance events is a pair of starting blocks. While not always required, runners especially in the 400 meter races often use starting blocks to propel themselves forward at the start of the race. In races such as the 800 meter run and 1500 meter run, blocks are not used, as the start of the race is not as important since it lasts for a longer period of time.

Lastly, depending on the scale of the event and where it takes place, different track and field meets will have different uniform rules. In many cases, relay races such as the 400 will require team members to wear the same color uniform top and shorts. Some major events also require that there be no advertisements on a player’s uniform unless they are approved by the event. This is due to specific sponsorship rules. Again, these rules will vary for different meets and events.

Are there different definitions of what is considered a middle distance race?

Some people will define middle distance races differently than others. Many consider running events between 400 meters (¼ of a mile) and 3000 meters (1 ⅞  miles) to be middle distance, while others consider 400 meter races to be sprinting events. On the opposite end of the spectrum, some will consider a 3000 meter run to be of the long distance variety. Different people will have their own definitions based on their perspective.

Can I become a middle distance runner?

If you train hard and dedicate yourself to running, you can certainly become a middle distance runner. Not only do you have to practice hard, you also have to eat the right foods so that your body can keep up with the training you are doing. Even if you are unable to become a professional runner, you can still compete in local racing events and just run for fun or to stay in shape.

What are some men's world records in middle distance running?

What are some women’s world records in middle distance running?

Pages Related to What are the rules of middle distance?