What are the rules of Long Distance? 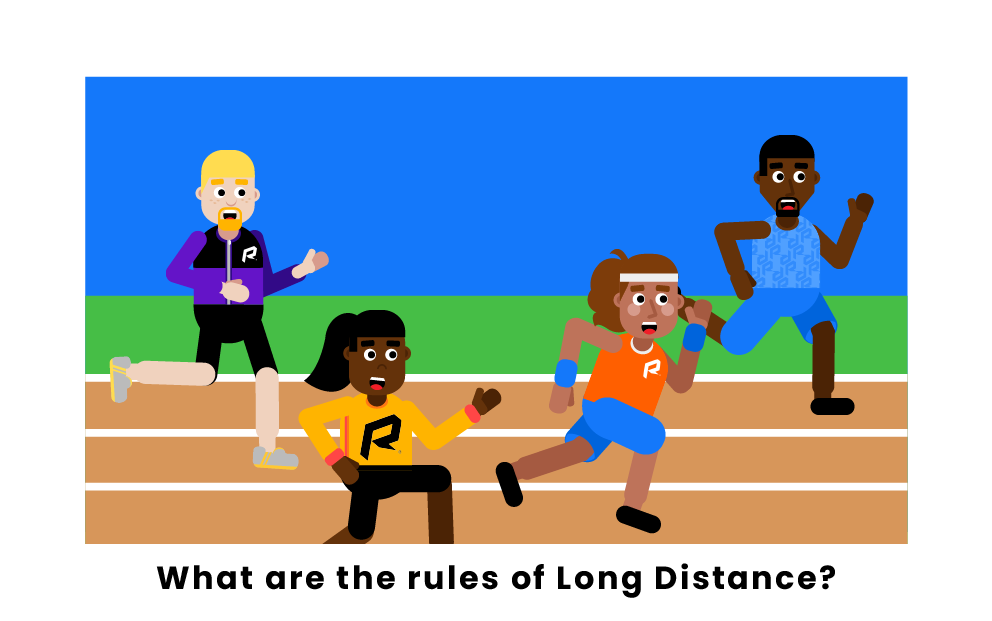 The sport of track and field involves several different running, jumping, and throwing events. On the running side, the events are often broken up into groups based on how far they are. The main groups are sprinting, middle-distance, and long-distance events. Sprinting events are anything less than 400 meters, and middle-distance races are from 400 meters to 3,000 meters. The remainder of this piece will focus on long-distance events, which are any races 3,000 meters or longer.

The shortest track and field race to be considered a long-distance race is the 3,000-meter run. 3,000 meters is slightly less than two miles, about 1.8 miles to be exact, and exactly three kilometers. At the start of this race, competitors are divided into two groups, with half starting on the normal start line and the other half starting on the outer half of the track a little ahead of the first group. Runners must remain in their groups until they reach the first turn of the track. This is done so that players on the inside do not have an unfair advantage from the start of the race by just being on the inside lane, as the inside lanes are naturally shorter than the outside lanes on a track. Once runners are through the first turn, they may cut inside as they wish, and lanes no longer matter.

Additionally, unlike sprinting events and some middle-distance events, runners do not begin in starting blocks, which are used to propel runners at the start of a race. This is because the start of the race is not as important in long-distance races, as runners have farther to run and are not as concerned about getting off to fast starts. As for false starts, runners are permitted one false start; then they are disqualified on the second one. Lastly, runners may not impede the progress of another runner by running into them or tripping them. If a runner does this, they are disqualified from the race.

The next widely-run long-distance track and field race is the 5,000-meter race. This race is the equivalent of five kilometers or about 3.1 miles. The rules are quite similar to the 3,000-meter race; just an additional 2,000 meters are added. The runners are once again divided into two groups at the start, half on the inside and half on the outside, and runners stay in their groups until the first turn, when they may cut in. There are also no starting blocks in this race once again; runners simply propel themselves at the start of the race on their own power. The false start rule and the rule about making contact with another competitor are also the same. As can be inferred based on these similarities, long-distance races are quite similar to each other in track and field. The only real difference between the races is the actual length of the race.

The longest major long-distance race in track and field is the 10,000-meter race. 10,000 meters is also the same as 10 kilometers or about 6.2 miles. The rules of this race are the same as the two races mentioned above. There are no starting blocks, the runners are divided into two groups at the start, runners may not impede the progress of another runner, and two false starts disqualify a runner. Again, the only major difference is the fact that this race is 10,000 meters long, while the previous two are 3,000 meters and 5,000 meters. There are a few other long-distance races that occur at various track and field events, but these three are the main ones that are run at major events such as the Olympics.

The last long-distance event is the steeplechase. At major track and field competitions like the Olympics, the steeplechase race is 3,000 meters, so it is barely a long-distance race. The rules that were discussed above are the same; the start of the race, the lack of starting blocks, running into another racer, and false starts. What makes this race unique is the barriers that are placed on the track that runners must jump over as they race around the track.

What makes the steeplechase the most unique, however, is the third barrier. The third barrier involves a standard 3.66-meter (12-foot) long hurdle that competitors jump off to and into a 70-centimeter (28-inch) deep water pool of water. Like the two dry barriers, competitors must pass over this barrier each lap they run on the track. The event can become quite treacherous, and competitors sometimes trip on the barrier and fall into the water. If this happens, they must get up quickly and continue running if they are able to do so. The water makes the steeplechase one of the most exciting races in track, and it is often quite popular with both the spectators and the runners who are racing the event.

What are some of the Equipment Rules for Long-Distance Running?

The most important piece of equipment for long-distance running is the pair of shoes that the competitor wears. There are special running spikes designed for longer races, and they allow for a stronger ability to push off and drive while running. The spikes on these shoes may not be longer than 25 millimeters or wider than four millimeters for these races. There are also various rules for uniform shorts and tops that will vary depending on the event. Competitors should always be sure to check the rules for their competition beforehand so they are not disqualified for a uniform violation.

What Long-Distance Races are at the Olympics?

Pages Related to What are the rules of Long Distance?