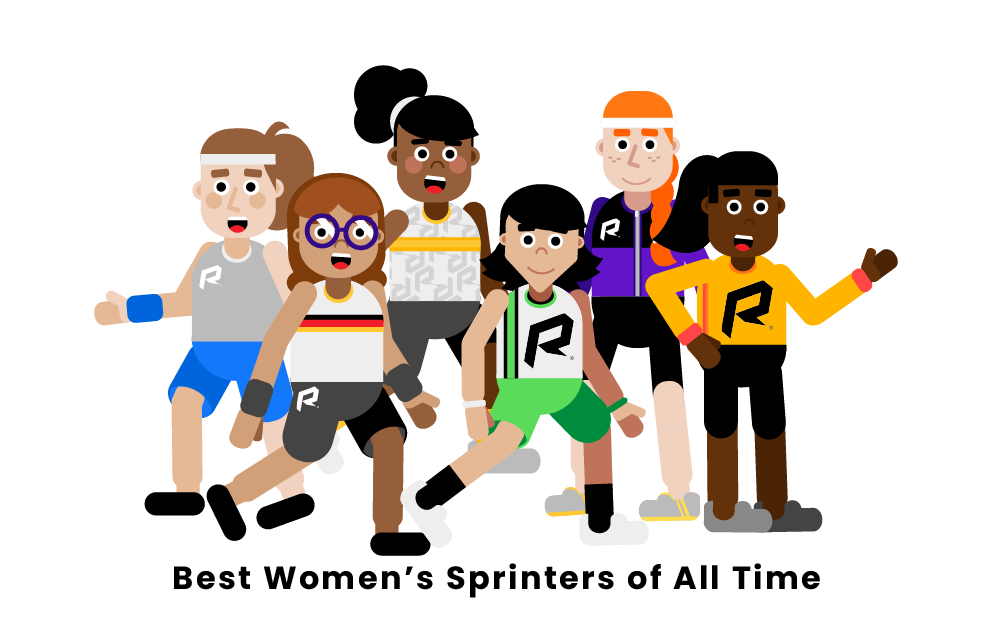 As one of the most competitive sports, sprinting has been home to some of the most impressive and decorated athletes over the years. From the Olympics to the World Track and Field Championships, sprinters have no shortage of competitions to show their skills. This list will highlight some of the greatest female sprinters ever to compete.

Who are the Best Women’s Sprinters of All Time?

Shelly-Anne Fraser-Pryce is a Jamaican-born sprinter who is one of the most outstanding athletes ever to sprint at the competitive level. Fraser-Pryce was the first Caribbean woman ever to win Olympic gold when she won the 100-meter event at the 2008 Beijing Games, finishing the event in a blistering 10.78 seconds. She continued her dominance, winning another gold at the following 2012 Games in London and eventually winning the silver medal at the 2020 games in Tokyo in the 100-meter. Fraser-Pryce was also a member of Jamaica’s gold medal-winning 4x100 meter team that year. A role model for many female sprinters globally, Shelly-Anne's talent and impact on the sport are undeniable.

Florence Griffith Joyner is an American sprinter and one of the greatest of all time. She set the record for fastest 100-meter (10.49 seconds) and 200-meter sprint (21.34 seconds), both of which still stand to this day. One of the highlights of her illustrious career came during the 1988 Seoul Summer Games, where Joyner took home four medals, winning three gold medals in the 100-meter sprint, 200-meter sprint, the 4x100-meter relay as well as one silver medal in the 4x400 meter relay. Joyner also won a silver medal in the previous Olympics, where she placed second in the 200-meter sprint in her hometown of Los Angeles during the 1984 games.

Irena Szewinska is a Polish runner who is widely believed to be one of her generation's most dominant female athletes. Winning her first gold medal and two silver medals at age 18 during her first-ever Olympics (Tokyo 1964), she set the tone for her awe-inspiring career. Over her time at the top, Irena won three gold, two silver, and two bronze medals over five Olympic Games. Irena is also the first woman to complete the 400-meters in less than 50 seconds, which she accomplished in 1984. Her numerous accolades undoubtedly justify her distinction as one of the sport’s greatest.

Merlene Ottey is one of the greatest female athletes to ever come out of Jamaica and one of the greatest sprinters the country has ever seen. She was named the athlete of the year in Jamaica 15 times, which speaks to her dominance. Merlene participated in seven Olympic games over her career. While she never won a gold medal, she took home three silvers and six bronze medals and became the first-ever Jamaican female athlete to win an Olympic Medal. Ottey also had success at the World Championships, where she won three golds and four silvers over her career, further solidifying the dominance she maintained during her career.

American sprinter Wilma Rudolph was one of the most influential runners of her generation. Wilma overcame her injuries and ailments early in her life to become the first American woman to win three track and field gold medals in a single Olympics. Her best and most notable performance came during the 1960 Rome Olympic Games, where Wilma dominated and won three gold medals. She obliterated the competition during the 100-meter sprint, tying the then world record of 11.3 seconds. She also won the 200-meter sprint and then followed that up with her impressive performance on the 4×100-meter relay team, which set a world record of 44.4 seconds.

Gail Devers is an American-born sprinter who was one of the greatest athletes and female sprinters the track and field world has ever seen. Devers dominated during her time in college, eventually being inducted into the National Track & Field Hall of Fame in 2011 and receiving the NCAA Silver Anniversary Award in 2013. After college, her success continued, and Devers went on to win her first Olympic gold medal in the 100-meter event during the 1992 Barcelona Games. She won two more gold medals in 1996 at the Atlanta Games and participated in a total of five Olympic Games. Gail's resume also includes five outdoor championship gold medals and four IAAF world indoor championship gold medals throughout her career.

Hailing from Australia, Cathy Freeman was a master of the 400-meter sprint. Her accolades in sprinting began at an early age, when she won a gold medal at the 1990 Commonwealth Games, when she was only 16. She followed that up with golds in both the 200 and 400-meters at the 1994 Commonwealth Games. At the 1996 Olympics in Atlanta, Georgia, she managed to become the sixth-fastest all-time in the event, completing the 400-meters in 48.63 seconds. She then proceeded to win the 400-meters at both the 1997 and 1999 World Championships. During the following Olympic Games, held in her home country of Australia, Freeman again dominated in the 400-meters, winning the event. Outside of sprinting, Freeman is active in philanthropy, having founded the Cathy Freeman Foundation, which she created in 2007. The foundation focuses on promoting education among Aboriginal and Torres Strait Islanders in order to help close the gap between Indigenous and non-Indigenous students in Australia.

Carmelita Jeter was a dominant US sprinter who made a name for herself in the late 2000s and early 2010s. She ranked across the board in the 2012 Olympics, securing a gold, silver, and bronze medal. She was also able to secure three World Athletics Championships wins, twice taking first place in the 4 x 100m event. Additionally, Jeter netted herself two Diamond League Final wins. To top it off, Jeter is the current NACAC record holder in the 4 x 100m event.

Marita Koch is a legendary German sprinter who accomplished a good deal within the sport during the 1980s. Perhaps most notably, she was able to secure both a gold and silver medal in the 1980 Moscow Olympics. She also had more than her fair share of success in the World Athletics Championship, with a total of three gold medals. These wins came in the 200m, 4 x 100m relay, and the 4 x 400m relay in the 1983 Helsinki event. Koch also made history in 1986 by setting the 400m record with a time of 47.6 seconds. This record has since been broken, but this former record stands as a testament to her ability.

Who is the best women’s sprinter of all time?

The greatest female sprinter of all time is Shelly-Anne Fraser-Pryce. Not only does she have three gold, four silver, and a bronze medal across her Olympic career, but she dominated in multiple events, including the 100-meter, 200-meter, and 4x100 meter relay event. Her dominance continued past the Olympics; she won the Women's World Track-and-Field Championships in the 100-meter dash four times (2009, 2013, 2015, 2019) and the 200-meter dash event in 2013.

What women’s sprinter has won the most Olympic gold medals?

Team USA sprinter Allyson Felix has the most Olympic medals out of any female sprinter in history, with seven. Allyson has accumulated eleven total medals across her extensive Olympic career, which began at the 2004 Athens Olympic Games. Felix ran the 400-meter dash and the 400-meter relay events, where she won seven gold, three silver, and one bronze medal, and placed for a medal at every Olympic that she participated in from the span of 2004-to 2020.

What women’s sprinter has the best 100m sprint time ever?

With a sport as competitive as sprinting, many athletes have strived to be the fastest, but American sprinter Florence Griffith Joyner holds the fastest 100-meter dash in history. During the 1988 Olympic Trials, Griffith Joyner finished the 100-meter sprint in an astonishing 10.49 seconds, which broke her previous best mark of 10.76 seconds, and set the record for the fastest time ever, a record which stands to this day.

Pages Related to Top 6 Best Women's Sprinters of All Time