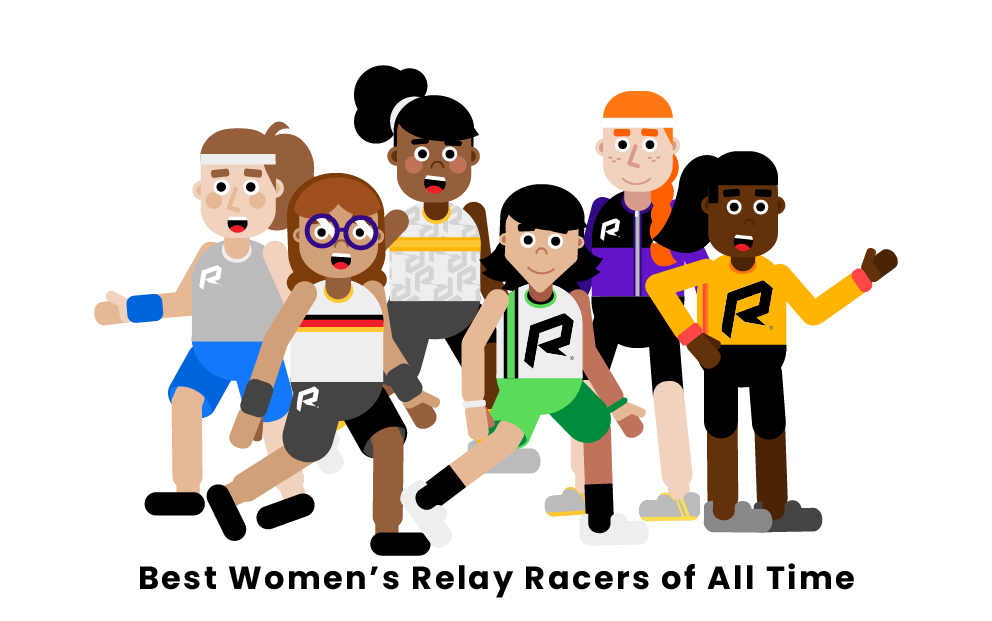 Being an effective relay team requires both great teamwork and exceptional individual athletes. Without the top sprinters in the world, relay teams cannot compete for gold. The 4x100 and 4x400 relay races have seen some terrific women’s teams over the years, but only a few have left legendary marks on the event. Keep reading below to learn more about the top six women’s relay racers of all time.

What are the best women’s relay racers in the world?

When it comes to relay racing, there is no athlete more decorated and accomplished than Allyson Felix. The American sprinter has far and away the most Olympic medals of any women’s relay racer ever, and she has had one of the greatest careers in track and field history. With the women’s 4x400 team, Felix won four gold medals, doing so in consecutive Olympics from 2008-2021. In the 4x100, Felix and her American teammates won a pair of gold medals, repeating as international champions in 2012 and 2016. She has also taken home eight gold medals and two silvers from relay races at the World Championships, and she was part of the American team in 2012 that set the 4x100 women’s record at 40.82 seconds.

One of Felix’s teammates for many years, Sanya Richards-Ross has been extremely successful in her own right. She raced with the American 4x400 team, and from 2004-2012 she won three-straight gold medals in the event. Richards-Ross also helped the United States win four gold medals and one silver at the World Championships, as well as a silver medal from the World Indoor Championships. Individually, she has one of the best resumes of all time in women’s track and field, with 22 Golden League titles, eight Diamond League wins, and six gold medals from the World Athletics Finals.

Another in the long line of great American relay racers, Evelyn Ashford helped the United States rise to prominence long before the days of Felix or Richards-Ross. In 1984, Ashford and her fellow Americans blazed a 41.65 in the 4x100, then the fourth-fastest time ever, to win the gold medal. Ashford and her team were far from done, however. Four years later, they traveled to Seoul and once again bested the rest of the competition for Ashford to win her second relay gold. Another four years passed, and Ashford and her team were up to the task once again, speeding past the other nations to win their third-straight gold medal. Ashford also helped America win a silver medal at the World Cup in 1981.

Tianna Bartoletta has perhaps the most interesting career of any athlete on this list. While she is here for her achievements in the women’s 4x100 meters, Bartoletta was also an exceptional long jumper and 60-meter sprinter. Still, it’s the relay races that helped lift her to national fame. Bartoletta teamed up with Felix in 2012 to help the United States set a new world record and take home gold at the London Olympic Games. At the following Olympics, Bartoletta was once again one of the four racers on the 4x100 team, and she once again helped guide the American team to a gold medal. Bartoletta also helped the U.S. win gold at the 2014 IAAF World Relays, and she and her team came back the following year to capture a silver medal.

The first non-American to appear on this list, Olga Bryzgina is here for a good reason. In 1988 as part of the Soviet Union’s 4x400 relay team, Bryzgina was instrumental in a world record effort. The team ran a 3:15:17 at the 1988 Olympic Games to both seize the gold and set a new world record. At the next Games, their run wasn’t quite as historical, but Bryzgina and her team did repeat as gold medalists. In the World Championships, Bryzgina has won both gold and silver in the women’s 4x400, and she also won a silver medal in the event at the World Cup in 1985.

Jearl Miles-Clark, a 400 and 800 meter specialist, was a key part of the American’s dominance in the nineties and early 2000s, helping them win a number of medals. At the 1992 Games in Barcelona, Miles-Clark and her team won a silver medal in the 4x400 meters, but weren’t satisfied. Miles-Clark would go on to win gold in back-to-back Olympics in 1996 and 2000, and she accomplished plenty more outside of the Games as well. Miles-Clark helped the U.S. win three gold medals in the 4x400 at the World Championships, and she was also a part of three silver medal efforts at the same competition. At the World Indoor Championships, Miles-Clark and her teammates took home both a silver and a bronze medal.

Who is the best women’s relay racer in the world?

Currently, the best women’s relay racer in the world is Allyson Felix. Not just one of the best relay racers, Felix is arguably the greatest female sprinter of all time. She has won six gold medals in relay events at the Olympics, and also owns eight gold medals, as well as two silvers, from the World Championships.

Who holds the world record in women’s relay races?

Which women’s relay racer holds the most Olympic gold medals?

The women’s relay racer with the most Olympic gold medals is Allyson Felix, with six. As if that wasn’t impressive enough, Felix has also won five other Olympic medals in sprinting, and she is the most decorated female sprinter of all time. Her effort in 2012 helped the American 4x100 team set a new world record, and she also helped the 4x400 team win two golds.