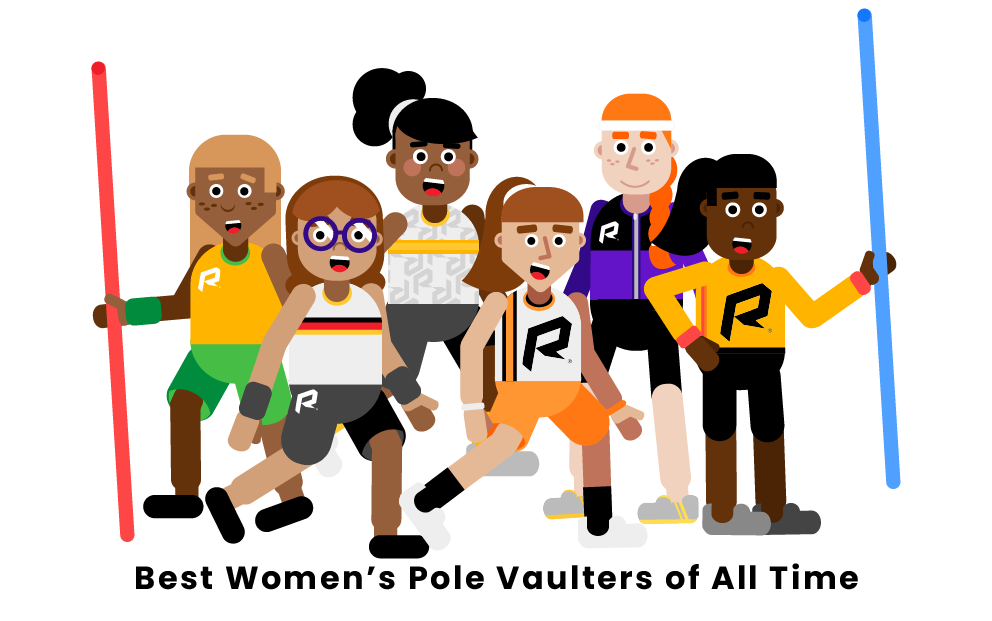 Pole vaulting is a technical and precise track and field event. Athletes must efficiently utilize a pole to launch themselves over a crossbar, and each attempt to clear the bar at a specific height is called a trial. Although pole vaulting has a long history as a sport, women have only been competing in Olympic pole vaulting since 2000. Read more to learn about the top female athletes in the history of the sport.

Who are the best women’s pole vaulters of all time?

Yelena Isinbayeva is commonly referred to as the “first lady” of pole vault. The Russian pole vaulter has had an incredible career and became the first woman ever to clear five meters during the 2008 Beijing Olympic games. She broke the world record for the highest height a woman has cleared a total of 17 times throughout her career. She has been recognized as female athlete of the year both by the International Association of Athletics Federations and Laureus. Additionally, she has won championships at the youth, junior, and senior levels of pole vaulting competitions. She retired from the sport in 2016 and began serving an eight-year term on the International Olympic Committee Athletes' Commission.

Still in the midst of her career, Anzhelika Sidorova is another extremely skilled pole vaulter. She is a Russian athlete who competed in her first Olympic games in 2020. She earned a silver medal for her skilled performance in pole vaulting. In fact, Sidorova is only one out of three women to clear five meters in outdoor competition, setting her apart from many other female pole vaulter athletes. She completed the feat in 2021 when she won the Diamond League title in Zurich, Switzerland. In 2020, Sidorova was nominated for Russia’s National Sports Award titled “Pride of Russia.”

Sandi Morris is a talented American pole vaulter and Olympian. Before her professional career, she set records during her high school and college careers. She competed for the Arkansas Razorbacks from 2011 to 2015 and still holds records in the NCAA. Sandi Morris became one of only three women to clear five meters and holds the record for third-highest height in female pole vaulting. She also holds the American record for highest female pole vault. Morris has competed at the Olympics twice and won a silver medal in 2016. Unfortunately, her pole broke at the Tokyo 2020 Olympics, leading to an injury and preventing her from competing. Morris is still active in her career.

Katie Nageotte is a famous American pole vaulter who won the 2020 Tokyo Olympic Games gold medal. The gold medal was an iconic win for Team USA, as Nageotte was only the third American woman in U.S. History to win gold in the pole vault. Her competitive career started in college when she represented both the Dayton Flyers and Ashland Eagles. She was the NCAA Division II Pole Vault Champion twice during her college career and was given the All-American title three times. She has excelled at the USA National Championships during her professional career and has competed at the IAAF World Championships.

Jennifer Suhr is a talented American pole vaulter who won the gold medal at the 2012 London Olympics. She was the second woman in U.S. history to win a gold medal in the sport. She has excelled in both indoor and outdoor U.S. National Championships and has won 17 championship titles. As a result of her extensive career at the U.S. National Championships, Suhr holds the record of the female athlete to clear the highest height on the pole vault in an indoor competition at 5.03 meters. Suhr has amassed a wide variety of awards in her career, including Track & Field News’ Female Athlete of the Year in 2009. The same news outlet ranked her as the top female pole vaulter in the world in 2011.

Who is the best women’s pole vaulter of all time?

Yelena Isinbayeva is considered the best women’s pole vaulter of all time. Throughout her career, she has won three Olympic medals, four World Championship medals, and five Indoor World Championship medals. Even in the early stages of her career, she won championships at both the youth and junior levels of the sport, proving her superior athletic ability. She is frequently referred to as the “first lady” of pole vaulting.

What women’s pole vaulter has won the most Olympic gold medals?

Who set the world record height for women’s pole vaulting?