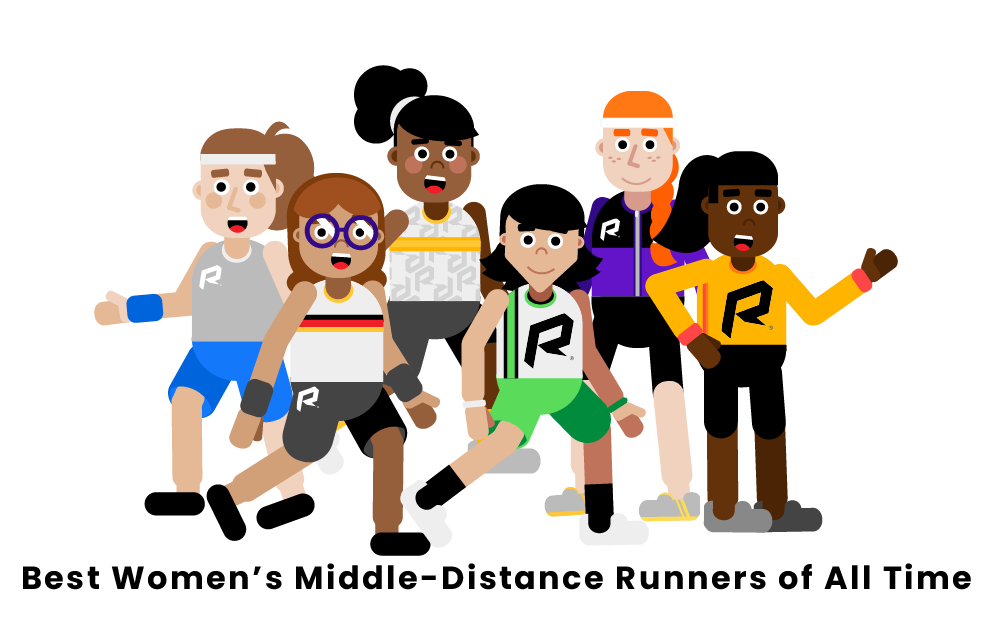 What are the best women's middle distance runners in the world?

When thinking of female runners, Genzebe Dibabe is a name that tops every list. She was a winner through and through, dominating in all sorts of competition during his illustrious career. At just 24 years old in 2015, Dibaba blazed a 3:50:07 time in the 1500 meter in Monaco to set a new world record, but the Ethiopian runner is far more than a one-trick pony. The following year in Brazil, Dibaba won a gold medal in the 1500, offering a small glimpse at her international prowess. She owns both a gold and bronze medal from the World Championships, but her resume is far more impressive under the roof. Dibaba has won five World Indoor Championships gold medals so far and is still actively racing.

Though she may not top any world record leaderboards, Carter Semenya has quite the golden list of accomplishments. At the 2012 Olympic Games, Semenya won gold in the 800 meters, and she came back in 2016 to repeat as champion with her second gold medal. Outside of the Olympics, Semenya has been one of the best runners in the world, racking up three gold medals and a bronze from the World Championships. The South African native has also dominated competition on her home continent for many years, capturing three gold medals at the African Championships as well as a gold at the All-Africa Games.

In 1983, Jarmila Kratochviolova became only the second woman to break the 1:54 mark in the 800 meters, and she bested the previous world record by less than two tenths of a second. Her new record still stands to this day as the best of all time, and she’s also the current world record holder in the 400 meter indoor event. However, these records are just a pair of the many accolades that made her such an accomplished runner. Kratochvilova won silver at the 1980 Olympic Games, truly kicking off her international career. She was a two-time gold medalist at the World Championships, and also won four gold medals at the European Indoor Championships. Outdoors, Kratochvilova was a two-time silver medalist at the European Championships, cementing her legacy as one of the best European runners ever.

Before Kratochvilova set the new world record, Nadezhda Olizarenko was on top of the world when she became the first woman ever to break the 1:54 mark in the 800 meters. Normally, athletes try to show their best at the Olympic Games, and Olizarenko made sure to do that to the highest degree. She won a bronze medal in the 1500 meter at the 1980 Olympic Games, but then proceeded to set the world record in the women’s 800 meter while also seizing the gold at those same Games. Olizarenko also won a gold and two silver medals at the European Championships, and was a one-time silver medalist at the indoor version of the competition.

One of just two women on this list with two Olympic gold medals, Faith Kipyegon is a rising star in the world of running. At just 28 years old, she already has one of the most impressive resumes in all of middle distance, winning a number of international competitions. In addition to her two gold medals, Kipyegon also has a gold and two silver medals from the World Championships, and she is a two-time World Cross Country gold medalist. The Kenyan-born Kipyegon has also won four Diamond League meetings, and she is currently the world record holder in the women’s 1000 meters.

When Pamela Jelimo ran a 1:54:01 in Switzerland in 2008, it was the fastest time the women’s 800 meters had seen in a quarter century. Jelimo was one of the great African runners of her time, racking up medals and wins like there was nothing to it. She captured a gold medal at the 2008 Olympic Games and returned in 2012 to take home a bronze. That same year, she won gold at the World Indoor Championships and also won three separate Diamond League meetings. Jelimo was also a one-time World Athletics Finals and African Championships gold medalist, and she was a six-time Golden League title winner.

Who is the best women's middle distance runner in the world?

Currently, the best women’s middle distance runner in the world is Genzebe Dibaba. Dibaba set the world record in the women’s 1500 meter in 2015 with a time of 3:50:07, and she has a stacked resume to support that historic effort. She was a silver medalist at the 2016 Olympic Games, and in her career she has won five gold medals at the World Indoor Championships.

Who holds the world record in women's middle distance runners?

Caster Semenya from South Africa, Faith Kipyegon from Kenya, and Tatyana Kazankina have all won two gold medals apiece, which stands as the current record for women’s middle distance running. Semenya won back-to-back golds in the 800 meters in 2012 and 2016, and Kazankina was a repeat champion in the 1500 meters in 1976 and 1980. Kipyegon won her first gold medal in 2016 in the 1500 meters and also successfully defended her title, winning another gold in 2021.