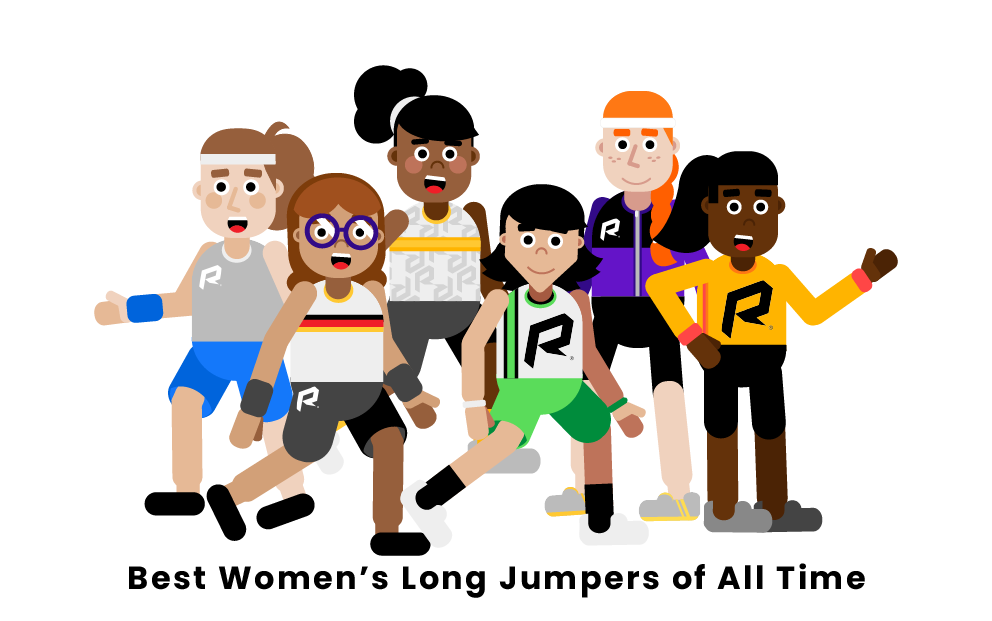 Long jump is one of the most impressive sports to watch, with jumpers routinely leaping distances that makes viewers’ jaws drop. Some of the best female athletes in the world compete in long jump, setting marks, and winning medals that cement their status as sporting legends. To learn about the six best women’s long jumpers of all time, keep reading below.

What are the best women's long jumpers of all time?

Though she may not have had Olympic success at the level of some other athletes on this list, Galina Christyakova is the only women’s long jumper who can claim to have the farthest jump of all time. Her 7.52-meter leap in Leningrad, Russia, in 1988 still stands as the best mark ever for a female jumper. Overall, Christyakova had plenty of international success, winning eight separate competitions during her career in long jump. She took home gold at the 1989 World Championships and won three golds at the European Championships in 1985, 1989, and 1990. Christyakova was also an exceptional triple jumper, though, at the time, women’s triple jump was rarely featured in any international competitions.

Jackie Joyner-Kersee is undoubtedly one of the best women’s long jumpers in history. Though her best-ever mark came in just over an inch behind Christyakova, there’s little question that Joyner-Kersee is the best athlete on this list. In addition to winning a gold and two bronze medals at the Olympics for long jump, Joyner-Kersee also won two gold medals and a silver medal in the women’s heptathlon (a competition consisting of seven different track and field events). In fact, she holds the record for the most points ever scored by a woman in the heptathlon with 7,291 and won two gold medals at the World Championships in the event.

Though Joyner-Kersee’s Olympic resume is impressive, Heike Dreschler’s success is not far behind. The German jumper won gold twice in the long jump, as well as a silver medal at the 1988 Games. In addition, Dreschler was a tremendous sprinter, winning bronze in both the 100 and 200-meter races at the 1988 Games as well. Internationally, Dreschler is one of the most decorated long jumpers ever, amassing an outstanding 21 wins and 11 gold medals. She won four-consecutive European Championships from 1995-1998 and remains the only woman to ever win two Olympic gold medals in the long jump.

Anisoara Cusmir did not jump for long, but she made her short career count. Between 1982 and 1983, Cusmir set and reset the world record four times, finally landing her personal best in June of 1983 at just over 24 feet 4 inches. In that span, she also finished second in long jump at consecutive European Championships. Cusmir represented Romania at the 1984 Summer Olympics and won gold, but that was the only Olympic Games she ever competed in. Shortly afterward, she retired from jumping to become a coach. Today, Cusmir is the president of the Romanian Athletics Federation.

Tatyana Kotova never won a gold medal at the Olympic Games, but she might have the most complete resume as an all-around jumper. In addition to winning two Olympic bronze medals in the long jump, Kotova was also an accomplished high jumper and triple jumper. She placed in the top three of international competitions seven total times between the two disciplines, including two wins. Overall, Kotova won two World Indoor Championships gold medals in long jump and won two silver medals, as well as a bronze medal in the outdoor World Championships.

Just an inch behind Kotova and Cusmir all-time, Belevskaya is still one of the best women’s long jumpers of all time. She only appeared in one Olympic Games in 1988, where she finished fourth, but she has had a number of top-three places in international competitions. 1987 was a great year for Belevskaya, as she won the silver medal for long jump at the 1987 World Championships and also won a bronze medal at the World Indoor Championships. In addition, she also took home bronze in the 1987 European Indoor Championships, completing a dominant run.

Who is the best women's long jumper in the world?

The best women’s long jumper in the world currently is Malaika Mihambo from Germany. In addition to winning gold at the 2020 Tokyo Olympics, Mihambo holds the second-best personal record among active jumpers with a mark of 7.30 meters, or just under 24 feet. The only active women’s long jumper with a better record is American Brittany Reese, who finished runner-up to Mihambo at the Olympics. Reese’s current record is 7.31 meters.

Who holds the world record in women's long jump?

The current world record holder in women’s long is Galina Christyakova. The Soviet jumper set her record in 1988 with a 7.52-meter leap, or 24 feet 8 inches. Though Chirstyakova never won gold in an Olympic Games, she did take home a bronze medal in 1988 and won eight international long jumping competitions.

Which women’s long jumper has won the most Olympic gold medals?

The women’s long jumper with the most Olympic Medals is Jackie Joyner-Kersee, with six. Only three of these are long jump medals, as Joyner-Kersee was also one of the greatest heptathletes of all time. She won the gold medal at the 1988 Games and won bronze in both 1992 and 1996. Joyner-Kersee remains one of the most decorated female Olympians of all time, but her long jump resume alone stands out from the rest.