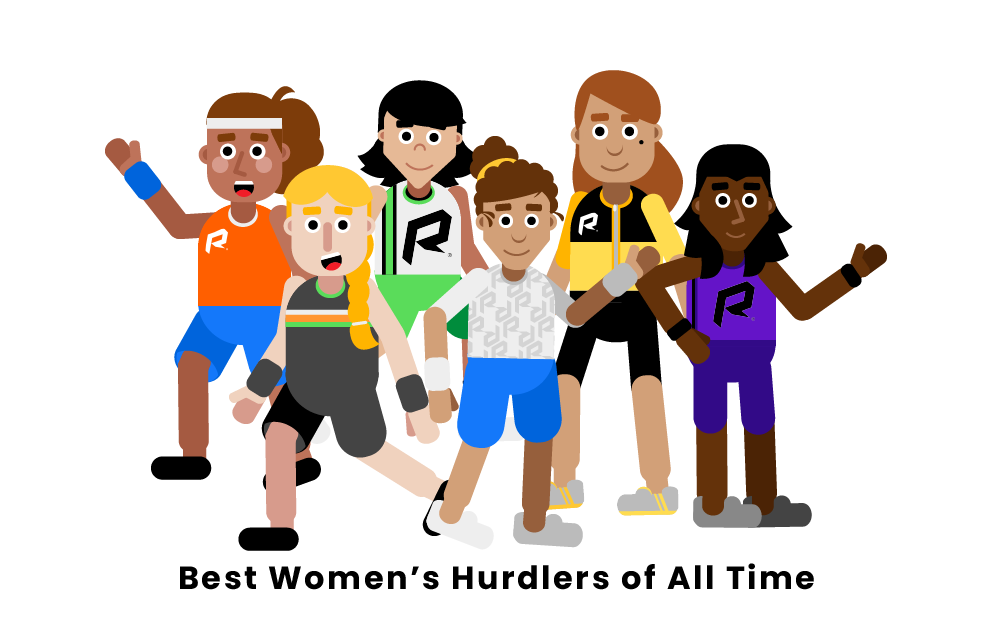 Being a great hurdler is quite difficult. Top athletes must not only be exceptionally fast, but they must also perfect their hurdling form in order to clear the obstacles as smoothly and efficiently as possible. In women’s competition, there are two main types of hurdling races: the 100 meter and 400 meter hurdles. To learn more about some of the greatest women ever to run these races, keep reading below.

What are the best women's long jumpers in the world?

Currently the best women’s hurdler in the world, Dalilah Muhammad showed no signs of slowing down in 2021. At the Olympic Games in Tokyo, she set a record for the second-fastest time ever in the women’s 400 meter hurdles, blazing a 51.58-second race to take home the silver medal. At those same Games, Muhammad was also able to capture a gold medal as part of the United States’ 4x400 meter relay team. In 2016 at the Games, she let no one get in her way, winning the gold medal in the 400 meters. Winning was no rarity for Muhammad, as in 2019, she put in a golden effort at the World Championships in both the 400 and 4x400 meter races.

Not to be outdone by her fellow American at the 2021 Olympics, Sydney McLaughlin set a world record in the same race that Muhammad came in second at. Her 51.46-second time was good enough for the gold and a new world record, one of three world records set in the event that day. McLaughlin was also a teammate of Muhammad’s on the 4x400 relay team and won gold along with her. Already with two gold medals at the age of 22, there’s no question McLaughlin is hurdling’s biggest rising star. She won silver in the 400 meter race at the 2019 World Championships (her first time ever in the competition), and also won gold with Muhammad that year on the 4x400 relay team.

The current world record holder in the women’s 100 meter hurdles, Kendra Harrison is still blazing her way through the racing community. In 2021, she won a silver medal at the Olympic Games, and in 2019 she produced a similar effort at the World Championships, taking home silver as well. Overall, Harrison has been one of the best Americans to compete in the event, winning four national championships so far as well as 15 Diamond League meetings. She is also an accomplished 60 meter hurdler, winning gold in the National Indoor Championships in 2017 and following that up next year with a gold at the same event in the World Indoor Championships.

Before Harrison reset the record in 2016 by one-hundredth of a second, the fastest woman of all time in the 100 meter hurdles was Yordanka Donkova. She dominated the competition in the late eighties and early nineties, winning gold at the 1988 Olympic Games and coming back in 1992 to win silver. She also won a silver medal at the 1987 World Indoor Championships in the 60 meter hurdles, but she was best known for accolades amongst European runners. She won three gold medals at the European Indoor Championships, but she was exceptional even without a roof over her head. At the outdoor version of the competition, she won a gold, two silvers, and a bronze, cementing her as one of the best European hurdlers of all time.

With one of the longest and most impressive resumes on this list, there’s no question Yuliya Pechonkina was one of the greats when it comes to women’s hurdles. She won gold at the World Championships in 2005 in both the 400 meter and 4x400 meter races, and she also won three silver medals and two bronzes at the same competition throughout her career. Moving indoors, Pechonkina was equally dominant, winning gold in 2001 and 2003 as part of Russia’s 4x400 meter relay team. She is a three-time Golden League meeting winner and is part of the current world record 4x200 meter women’s relay team.

When Ludmila Engquist recorded a 12.26-second time in the 100 meter hurdles in 1992, she stood alone in fourth place all-time on the women’s world record leaderboard. Since then, three other athletes have tied her mark, but she still remains one of the greatest women’s hurdlers ever. She won the gold medal at the 1996 Olympic Games, and also won gold twice at the World Championships, once in 1991 and again in 1997. In 1999 she came back to the World Championships and captured a bronze medal, but her accomplishments didn’t end there. She owns a gold and a silver medal from the 60 meter hurdles at the World Indoor Championships and was the national champion of Sweden in the 100 meter hurdles in 1996.

Who is the best women's hurdler in the world?

Currently, the best women’s hurdler in the world is Dalilah Muhammad. Muhammad has won two Olympic gold medals, as well as a silver medal, and currently owns the second-fastest time in the women’s 400 meter hurdles ever. However, her fellow American Sydney McLaughlin may soon take over the top spot, as she has already won two gold medals and at the age of 21 set the world record in the 400 meter hurdles.

Who holds the world record in women's hurdlers?

Which women’s hurdler holds the most Olympic gold medals?

There are two women’s hurdlers tied for the most Olympic gold medals, with two each. Sydney McLaughlin and Dalilah Muhammad of the United States both have a pair of gold medals, one from winning the 400 meter race (Muhammad in 2016 and McLaughlin in 2021) and one from the 2021 women’s 4x400 meter relay. Interestingly enough, no woman has ever won two gold medals in hurdling events alone.

Pages Related to Top 6 Best Women's Hurdlers of All Time